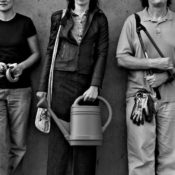 An interesting phenomena happens when urban trees suddenly start dropping fruit–people and the communities come together to feast on the spoils!

Guerrilla Grafiting takes its roots from Guerrilla Gardening, a practice with a long history that dates back to the 17th century. In the 1960s and 70s. a bicoastal resurgence took hold of the movement in the United States–hippies on the west coast and hipsters on the east coast. The movement gained in popularity when in 2004, Richard Reynolds–considered the father of Modern Guerrilla Gardening–began documenting and spreading the gospel of “illicit cultivation” on his blog. Guided by the mission to tackle “the war against neglect and scarcity of public space as a place to grow things,” Reynolds moved around London, steadily grafting his way towards a tastier paradise. 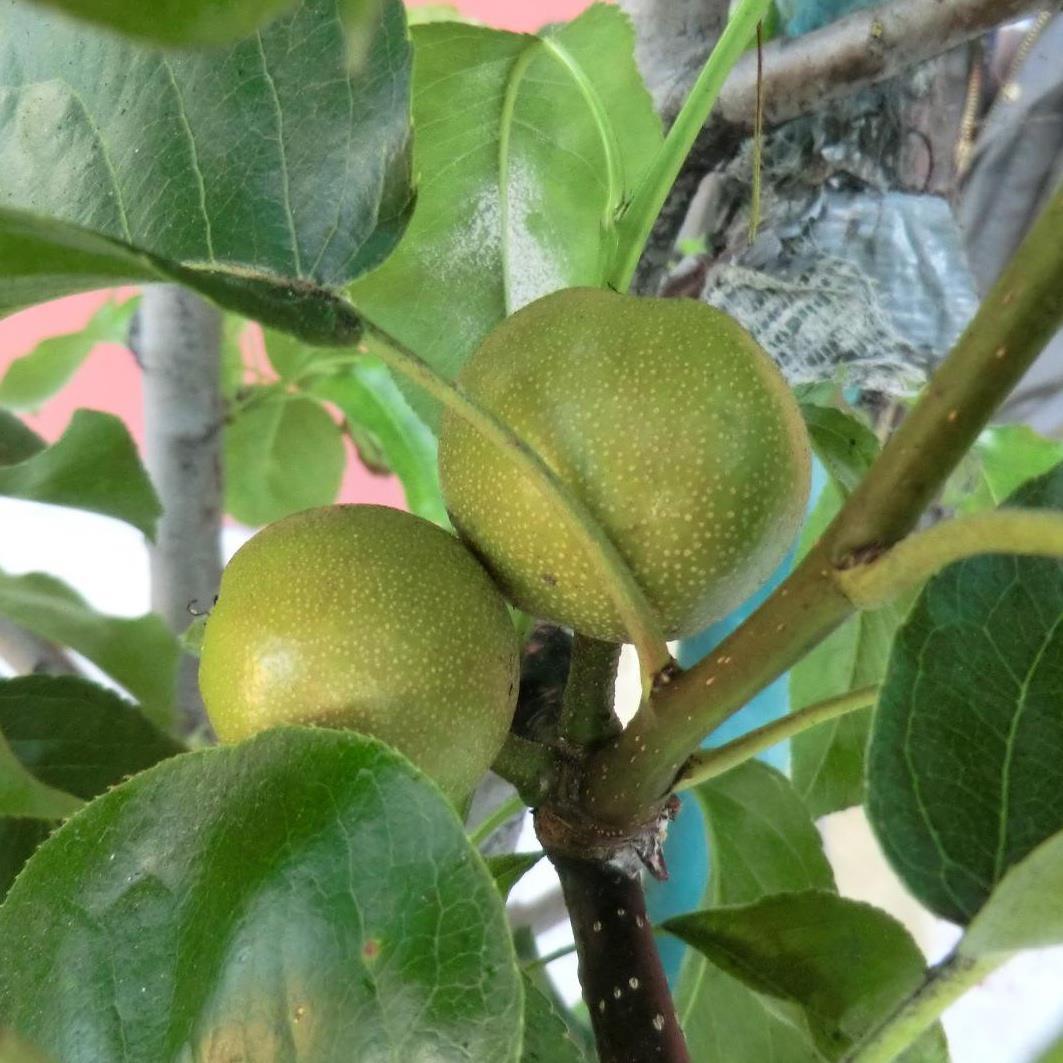 Though the underlying motivations for Guerrilla Gardening and Grafting are similar, the former group primarily aims to beautify neglected space, whereas the latter grafts to turn established sterile trees into fruiting trees in order to maximize the benefit of those plants. 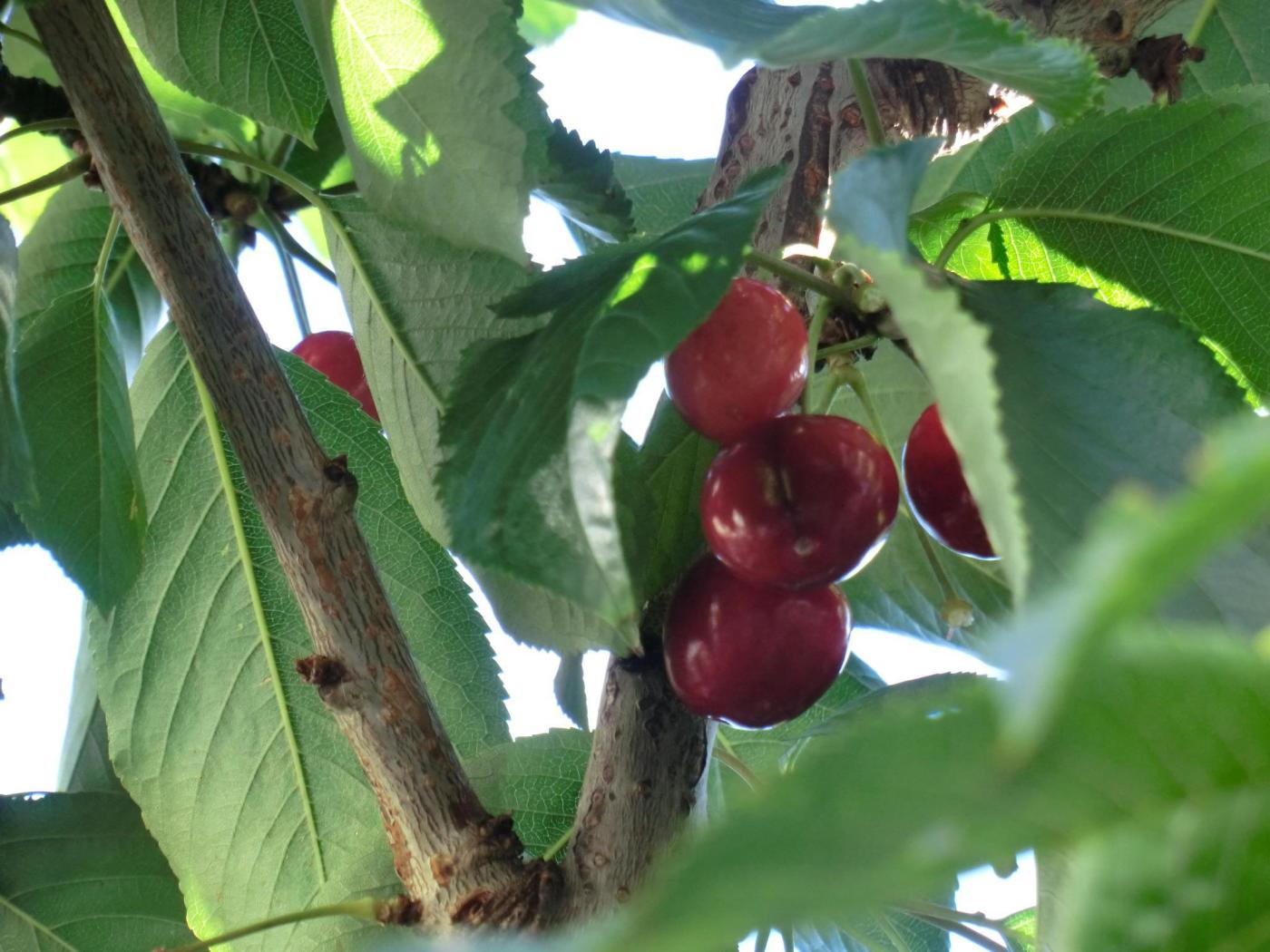 Tara Hui, founder of Guerrilla Grafters explains the inspiration behind her project: “we really didn’t have any fresh produce.  The area I lived in was considered a food desert, but it had a lot of sidewalks.”  The purpose of the Grafters, she explains, “is not so much to antagonize but to bolster a sense of ownership within the community.”  Hui stresses that the group doesn’t haphazardly graft; each grafted tree has an “adoptive parent” who monitors the progress of the graft and the overall health of the tree as it morphs into abundance.  Grafting also provides social opportunities, such as “a sense of camaraderie and relationship with neighbors and a trusting relationship with the space and people around you.”

The grafting season occurs in late winter or early spring, when the trees are just beginning to wake up from dormancy. In the meantime, Guerrilla Grafters encourage activists to set up grassroots guerrilla grafting groups.  Their hope is that people will take ownership of different geographical regions and use grafting to enhance their communities through food and social awareness. 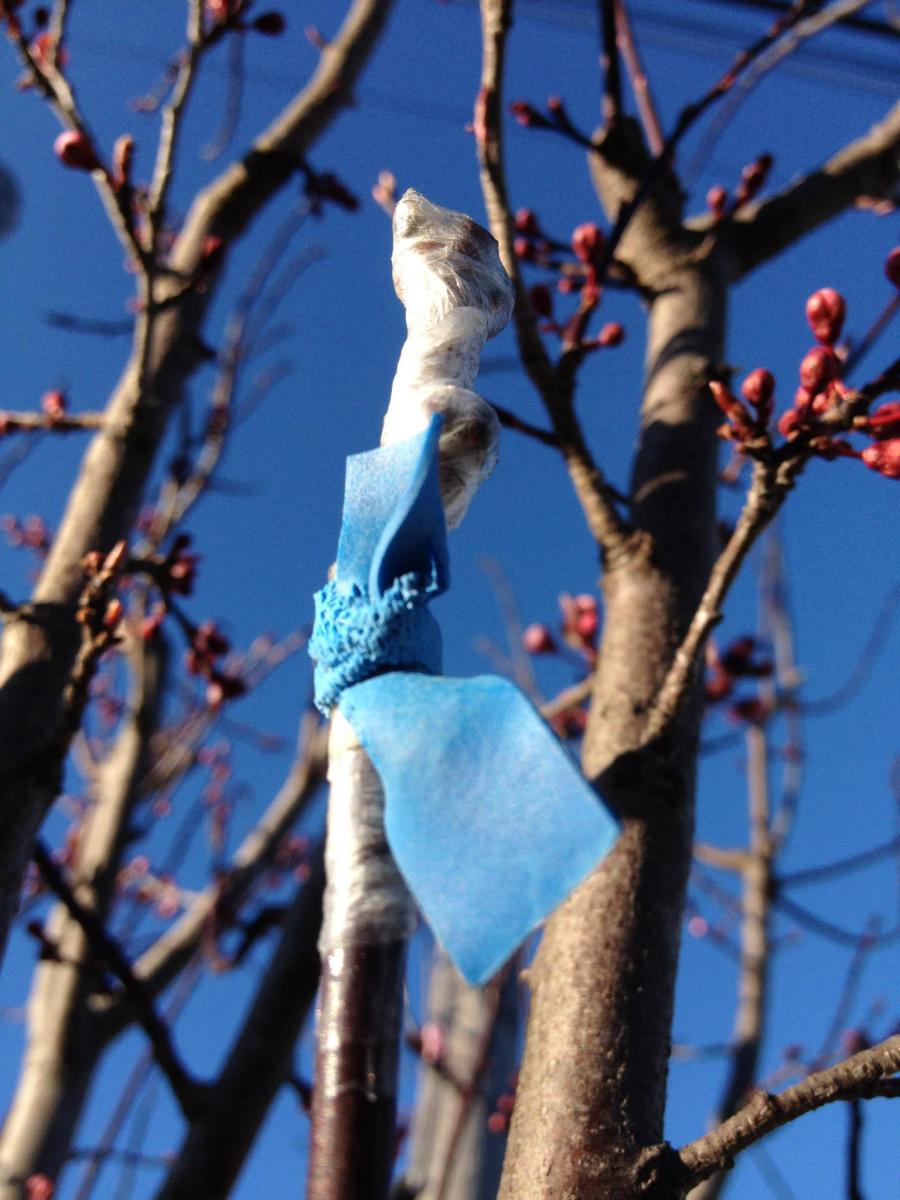 The group also tracks their grafts for vandalism.  “We say ‘vandals’ although we suspect some sort of authority or agency, but we can’t prove it,” says Hui. “The targeting and skill of pruning [can be] so severe…that we don’t think it’s just random people doing [the vandalism].  In one case in San Francisco, an entire street of trees were pruned/had grafted branches cut off, and some have died as a result.” In order to preserve their work, the group must be careful to not release photos that depict identifying landmarks. Recently, the group has abandoned the use of flashy, color-coded electrical tape in favor of the more discrete grafting tape. 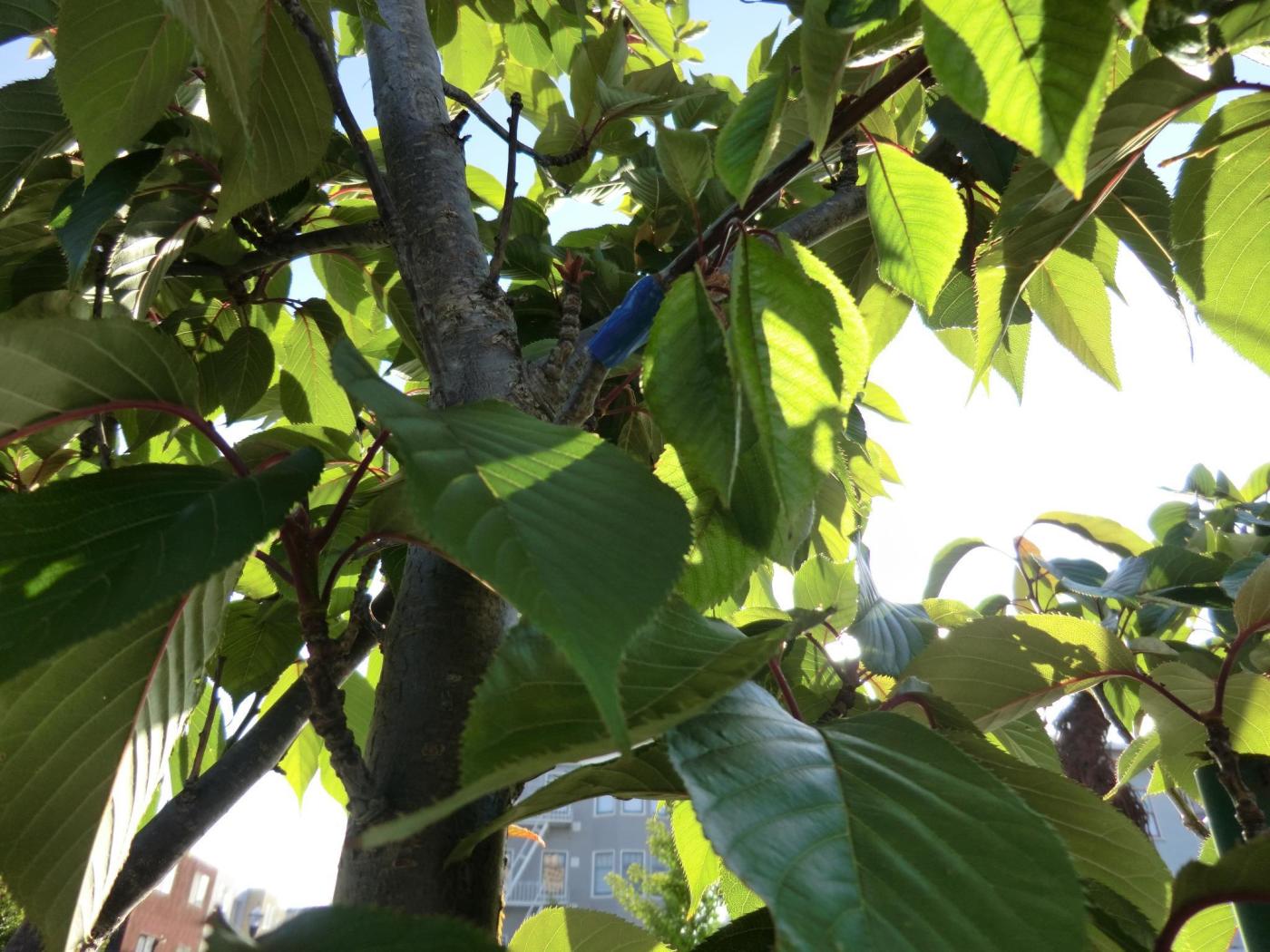 Interestingly, some of their greatest support comes from computer hackers–who help identify weaknesses in city mandates–and artists who appreciate the work as garden graffiti.  Many municipalities, however, oppose guerrilla grafting on the grounds of public safety, should someone slip on the sidewalk from rotting fruit, as well as fears of other nuisances such as rat infestations.

I believe the art of the Guerrilla Grafters and its tagline–“Unraveling civilization one branch at a time”–is a brilliant example of “constructive rebellion” and definitely one to keep your eye on!

Do you live in a food desert or have advocates participating in unlawful, radical forms of propagation in your community? Comment down below to let us know!

All Images courtesy of Guerrilla Grafters. 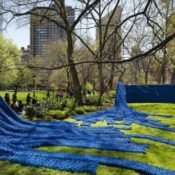 Madison Square Park is known as “the museum without walls,” and rightfully so as the name is a product of the Madison Square Park Conservancy’s stellar contemporary art program, MAD. SQ. ART.  The Conservancy is a private/public/ non-profit organization that partners with the NYC parks department to raise capital for park maintenance.  The extensive contemporary art program fills the park with regular outdoor exhibits extending an ephemeral quality to the public space, enticing visitors  – local and afar – to return regularly for art in the park. 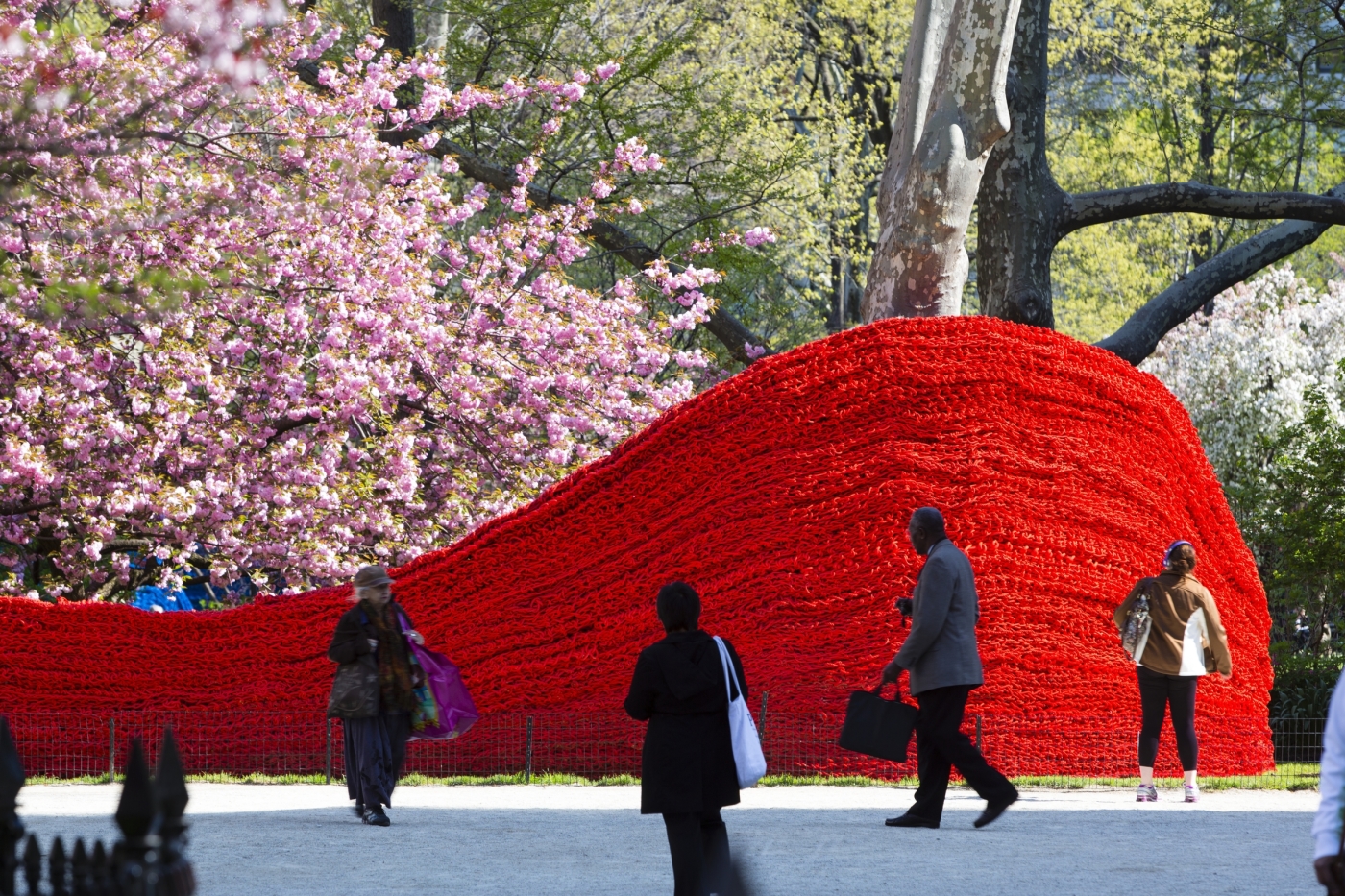 On May 1, 2013, Madison Square Park debuted its inaugural, traveling exhibition, Red, Yellow, and Blue by Brooklyn artist, Orly Genger.  Genger’s crew of assistants knitted, knotted, and painted in primary hues over one million feet of orphaned, nautical rope.  The woven repurposed masterpiece, which was once stinky seaward garbage, represents an exquisite example of public art among the business and bustle of New York City’s Flatiron District. 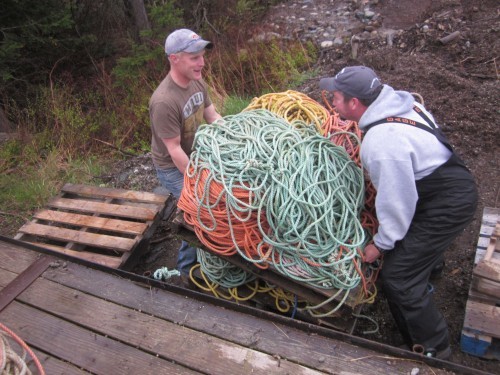 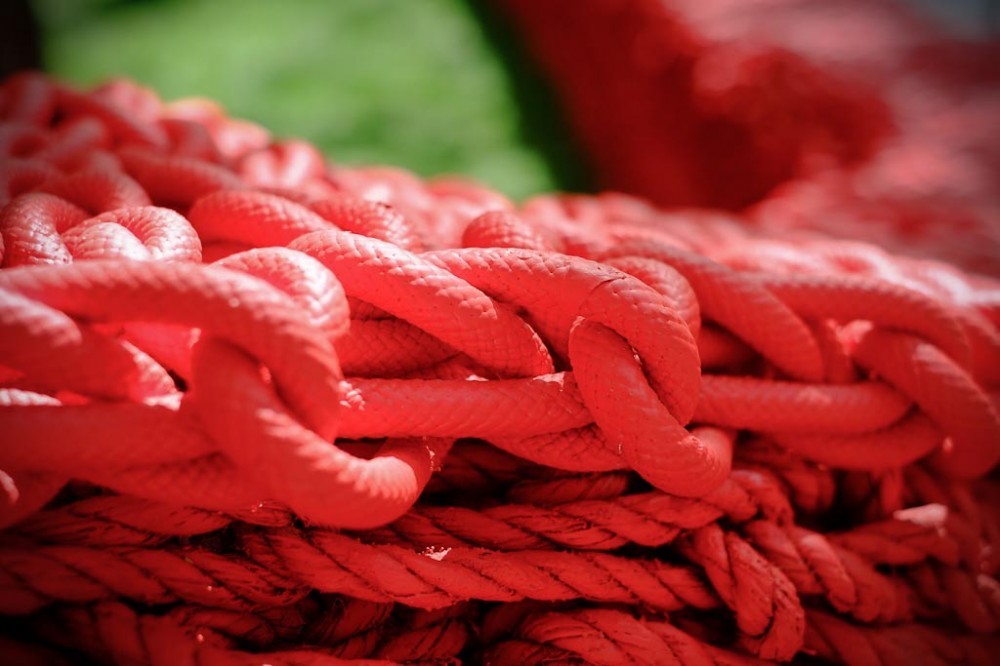 Genger’s work represents the renaissance of traditional craft transformed into modern art at an epic scale.  The repurposed material, formerly juxtaposed in the salty sea among tides and currents, creates a menagerie of marine twine twisting through Madison Square Park, remodeling the space into canyons and underwater landforms that appeal to the senses through vibrant color, and texture.  The trees soar above the forms creating a fantastic play on scale and proportion while the green grass knits itself into contrasting patterns that complement the primary colors. 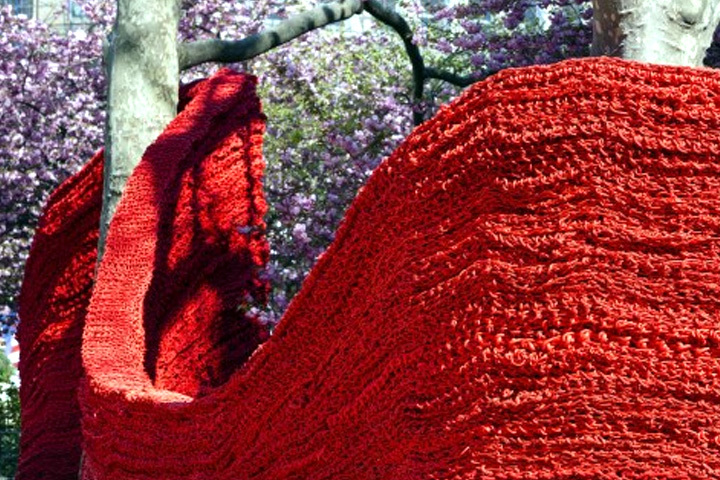 Red, Yellow, and Blue is abundant with polarities that merit individual discussion such as, feminine vs. masculine, domestic art vs. fine art, large scale vs. small scale, ocean vs. land, push vs. pull, man vs. nature, and craft vs. contemporary.  There are likely many more; and each one deserves analysis as it pertains to contemporary art on the canvas of land and how public art connects people to spaces. 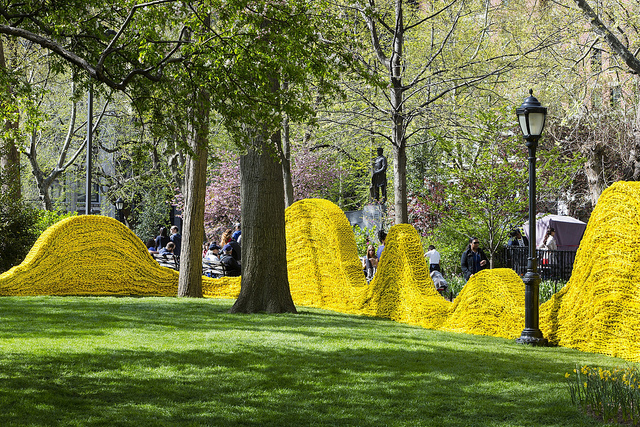 The sculpted bajada of thoughtful handwork is not static.  Red, Yellow, and Blue will be untied from the cleats of Madison Square Park in September and set sail for Boston just in time for the 2013 ASLA Annual Meeting & EXPO.  Ground yourself in this summer space of seaside rope soaked in brilliant paint, formed into a soothing canyon of art within a public space, or wait until the fall, where you might be lucky and experience this sculpture in another outdoor gallery powdered with snow. 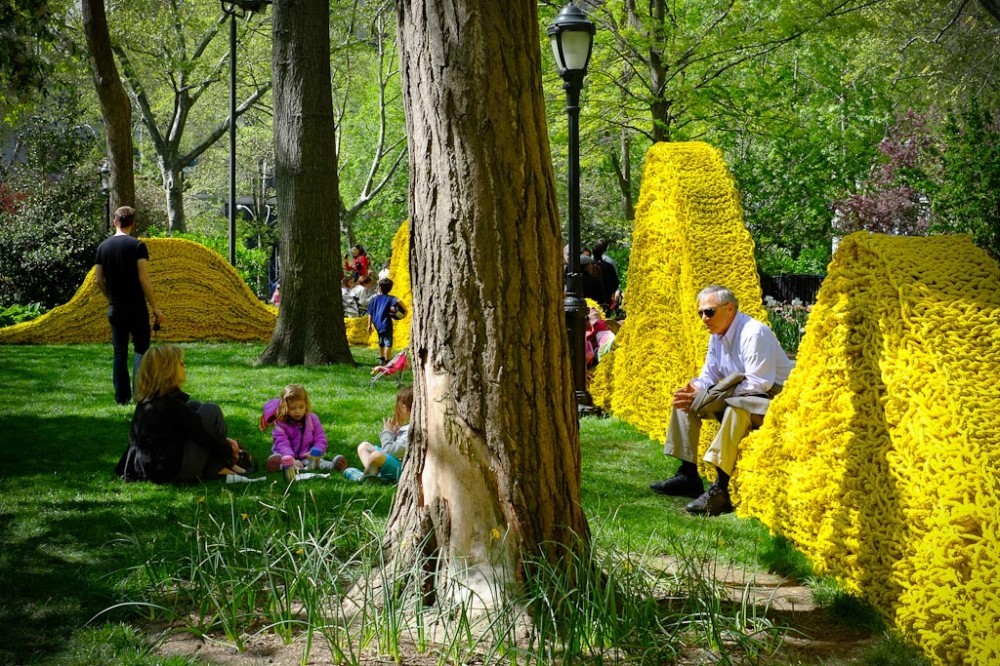 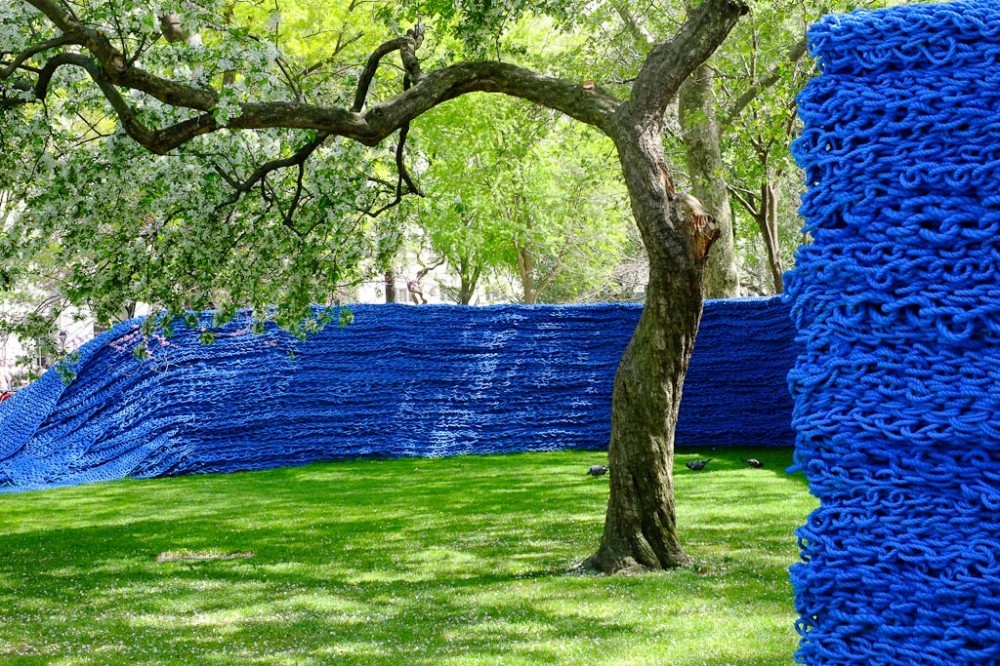 Images above courtesy of SMITHRATLIFF.COM

Although I will not be visiting this installation in person, it has certainly inspired me through photos.  I can only imagine what it must be like to physically stumble upon these rolling waves in the middle of a park where art is free for all – the result of a delightful product of designed space, partnership, and programming.  Here is interview by ARTINFO with the artist, Orly Genger:

If you are lucky enough to visit Red, Yellow, and Blue in Manhattan, please leave us line or a tag @Land8 on your instagram and facebook photos, and do the same if you embark on Boston in the fall.