Article by Irmak Bilir Anchor Park by SLA/Stig L. Andersson, Malmö, Sweden. Anchor Park is located in the middle of a new urban neigborhood built at the former industrial estate and port area of Västra Hamnen in Sweden’s coastal city of Malmö. The park has a patchwork character and uses the water in a way we haven’t often seen: The water is intentionally collected in reliefs! In the spring of 1999, the City of Malmö invited SLA to build Anchor Park for the new district of Västra Hamnen, as a part of the international housing exposition BO01, held in Malmö in 2001. With Anchor Park, SLA gained a nomination for the European Mies van der Rohe Award in 2003. The park serves as an attractive urban space for everyone, not only for the area’s residents. 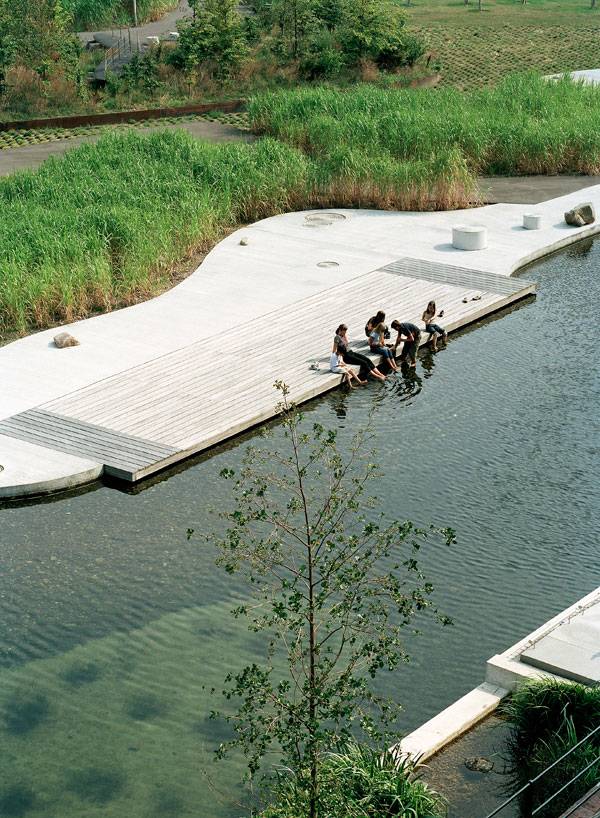 The 29,000-square-meter, rectangular park is divided into two unequal halves divided by a low, sinuous wall consisting of a lawn with biotope islands. This provides a living place for a specific assemblage of plants and animals on one side, and a pool on the other. The canal of about 9,000 square meters of saltwater is a beautiful focal point. It is wide, and the park’s shoreline side is wavy, while the opponent side of it is linear. Visitors can cross over the canal on straight bridges that have fences and wooden floors. The largest bridge’s direction is not 90 degrees to the water’s flow — this positioning allows visitors to spend more time walking over the water. The bridge is easily accessible to people who have disabilities, as it has a low-slope entry. Moreover, straight jetties and winding chains make the park a place of continual experiences and surprises. 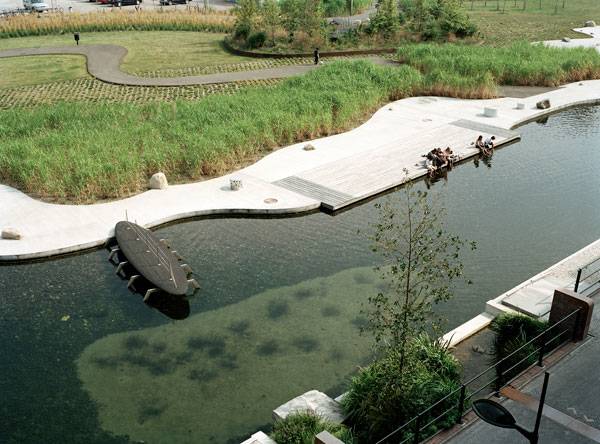 A Patchwork Park The most significant and distinctive characteristic of Anchor Park is its patchwork nature, in spatial terms. It is subject to continuous and ceaseless change and is not organized along hierarchical lines. Rather, its axes and perspective lines feature sequences of open, flowing spaces. Four biotypes play the main role as non-aesthetic materials, which include wood, concrete, metal, and rubber typical of the ancient port and coastal towns. All of them are different in sensory effect and change steadily under the influence of the weather. They are enclosed in steel and lie in the lawns like independent and self-sufficient microcosms. 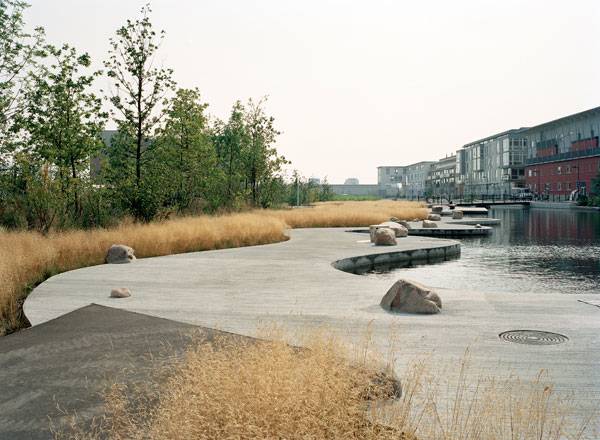 Another different component of the park is the reliefs that have been pressed into wet cement along the canal. Because rain falls an average of 113 days a year in this part of Scandinavia, these reliefs collect the rainwater and create water puddles on the bank. A string of fiber optics traces the line where the water and the bank meet, casting a glimmer of light across the water’s rippling surface and giving it artificial phosphorescence. 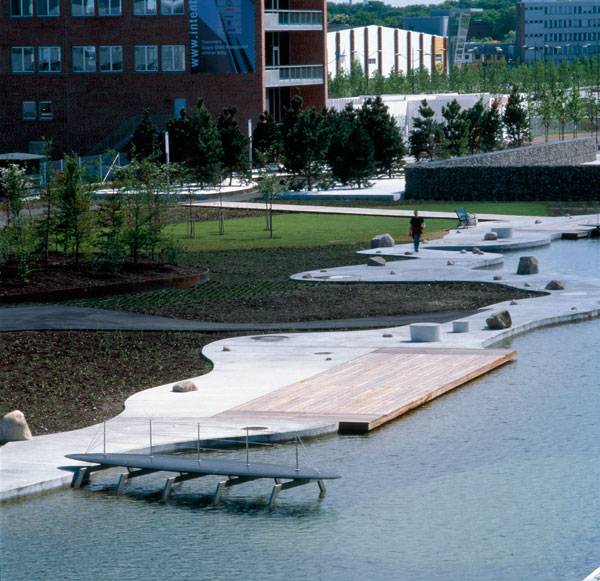 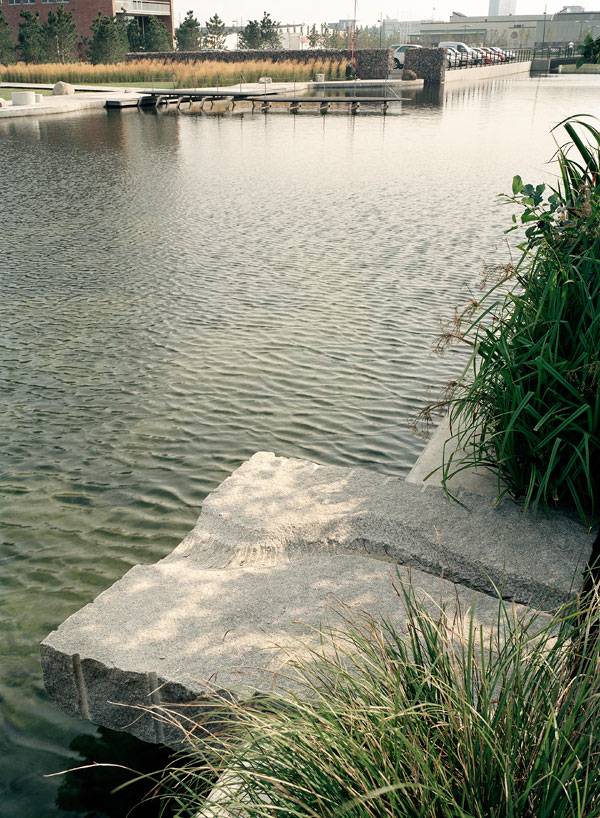 The Vegetation Anchor Park has seven different species of grass, which will eventually grow together over time. These grasses assist the patchwork system of the park. The grass zones provide visual diversity with their various colors and textures. Some types grow taller, some are more thick and short, and all have some special features. All of the grass species wither and turn gold or brown during the winter months, and this maintains the homogeneity. In other seasons, the park offers refreshing changes every day and intensifies the experience of being present in a certain time and place. The trees and bushes are divided from the grass by a low elevation. Grass species cover most surfaces of the park. In addition, the park’s biotopes include alder swamps, pine species, oak forests, and saltwater biotypes with crayfish. All of these encourage contemplation and children’s play. Marine biologists assisted with the canal’s living population of seaweed. The park’s vegetation is complex, providing an opportunity to experience and learn about Swedish biotopes in the middle of the city. Thus, the park is a new type of urban park — a hydroglyph. Developed according to ecological considerations, it points out liquid compositions of different habitats. 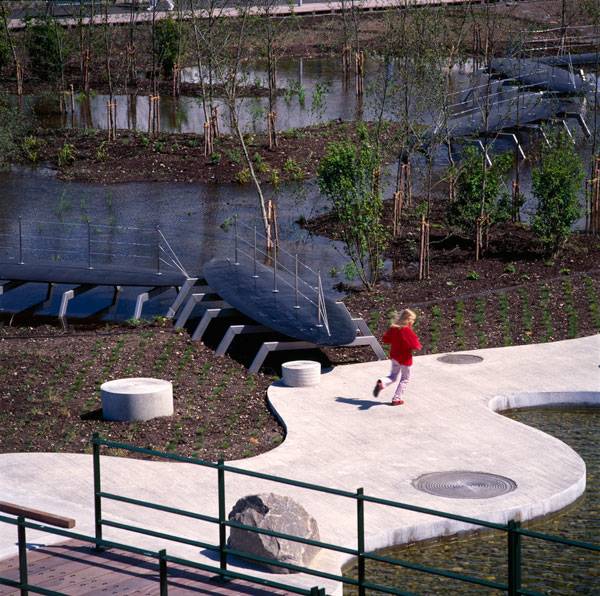 Landscape Elements Large and small Swedish boulders, embossments, and conical and cylindrical elements are used for visual effect and for seating along the kilometer-long concrete bank. If they prefer, visitors can sit on the wooden decks and swing their feet toward the water. We generally see boles as being horizontally cut in landscape architecture, but in Anchor Park, they are used more creatively. A long bole, cut from the middle with a quarterly shape, provides a place for seating. It is remarkably inspired and emphasizes the naturalness of the park. In landscape architecture, it is always so important to see objects that are used a lot in a different perspective. 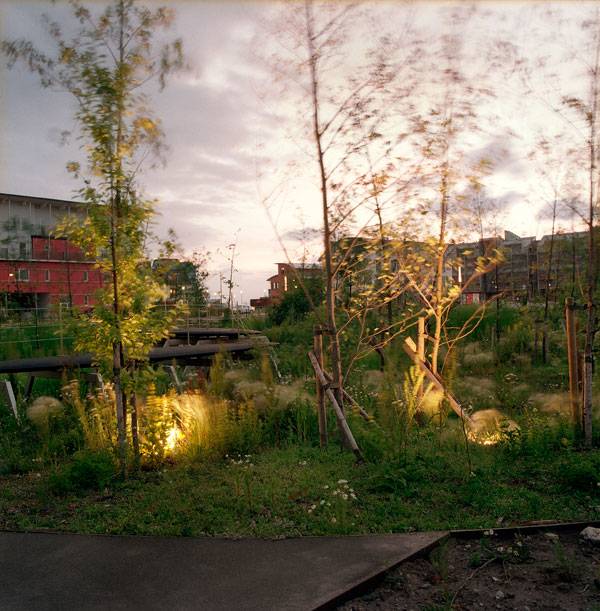 Surroundings The surroundings of Anchor Park are generally buildings of three to four stories. A tall, white conferance center – Turning Torso — is one of the determinative structures around the area. It is dramaticly tall and eye-catching if we compare it with other buildings. Its reflection can be seen in Anchor Park’s canal. There are a few other natural places in Västra Hamnen, but Anchor Park has created a completely new ecosystem and livened up this area. Trees, plants, and water provide residents and visitors with a way to experience the different habitats of the Swedish countryside. Moreover, it shows us how to create a patchwork park and different perspectives for using water and reliefs. Do you think Anchor Park has demonstrated this well? Let us know in the comments below! 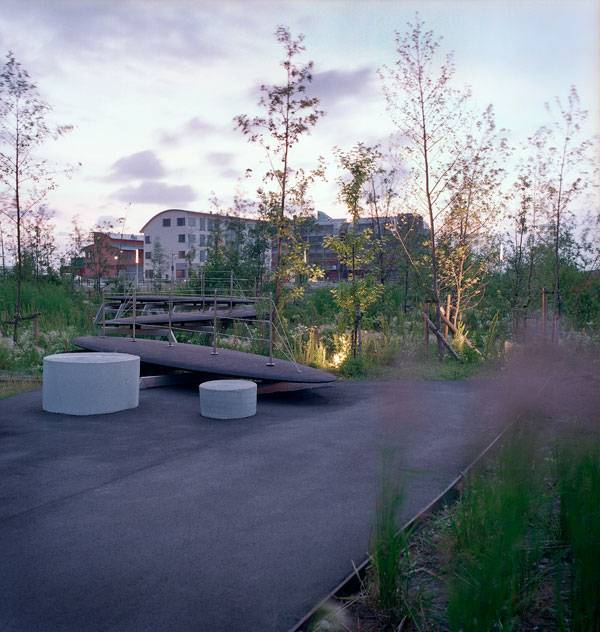