David H. Koch Plaza at the Metropolitan Museum of Art, by OLIN in New York City, New York, USA. Before I share the intricacies of the project with you, I would like to first share this quote by Jane Jacobs, as cited by Dennis McGlade, partner at OLIN, when commenting on his thoughts about the project: “The ballet of the good city sidewalk never repeats itself from place to place, and in any one place it is always replete with new improvisations.” This is a project that revolves around transformation and this quote is a gentle reminder that tells us of the inconsistent patterns between people and spaces. Why is it so relevant to this project? Well, the project is grandly sitting in Manhattan, New York- one of the most famous, busiest metropolitan cities of the world, in front of one of the largest and prestigious art institutions of the world- the Metropolitan Museum of Art. David H. Koch, who is among America’s richest and frankly not so popular men, funded the project with a $65 million dollar donation.

It would be an understatement to say designing for a colourful community of New Yorkers and tourists alike would spark a challenging task of accommodating the fusion of movement and change, a “dance” as Jacobs calls it that glaringly exists. This is the result of what was supposed to be repair work for the long-standing space and its old fountains that turned into a total redesign of the public spaces spanning four blocks long. It has brought about many controversial opinions but keeping this quote in mind, let us see why the space works. 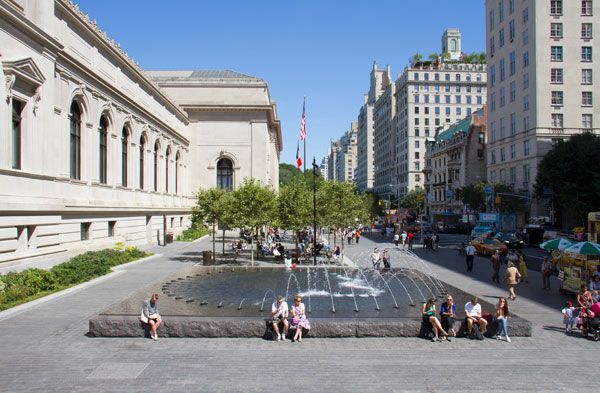 OLIN led the design for an ultimate pedestrian experience in the outdoor space that runs throughout Fifth Avenue whilst creating a welcoming destination for the Museum’s enthusiasts. The $65 million contribution allowed the replacement of the old fountains into ones with a modern design, new paving, atmospheric lighting and a whole lot of tree planting. 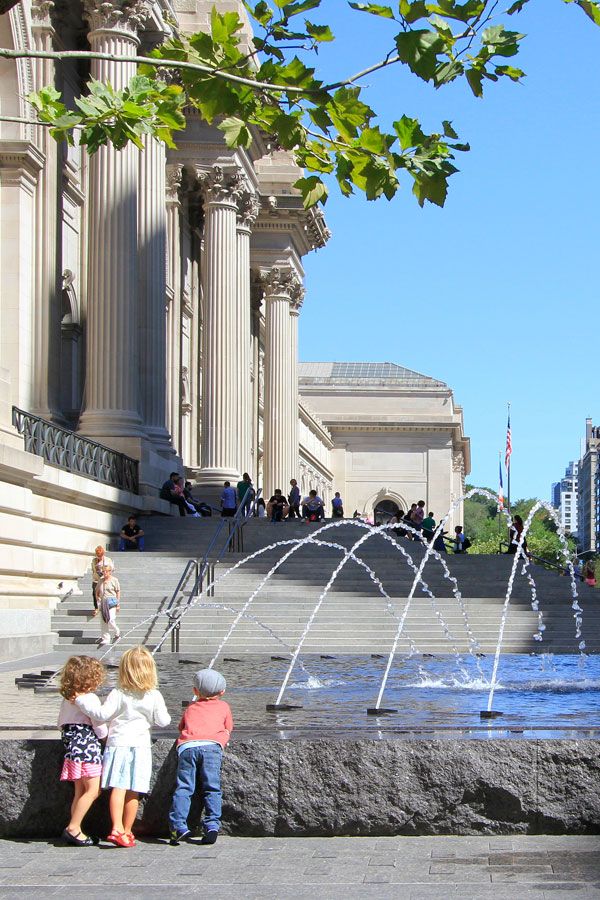 Fountains Reflecting the City’s Contemporary Rhythm New granite fountains are positioned close to the museum’s beloved iconic stairs marking a grand entrance to an equally grand façade of the museum. Water elements are always a welcoming feature in an urban space as the movement and sound of water ignites those who come into contact with the space with energy. These fountains, particularly, have individually controlled nozzles that eject streams to display geometrical shapes and innovative motion patterns. The simple square form of the fountain with its circular centre connects Museum’s historic architecture and the City’s contemporary spirit through the motions they create. 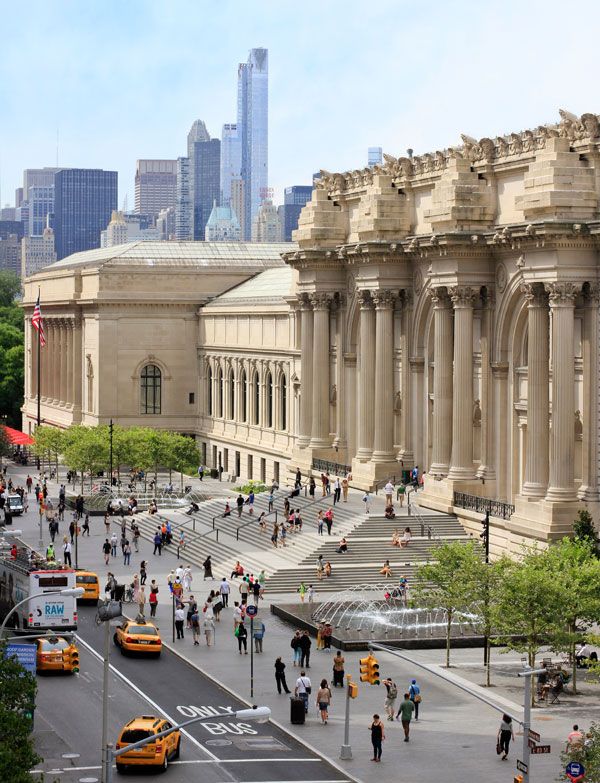 With environmental sustainability in mind… The plaza has approximately 100 new trees, doubled the previous number creating a shaded environment whilst reducing the surface temperature of the paving by as much as 25 degrees Fahrenheit. A suspended paving system allows subsurface tree pits to collect and use on-site stormwater, taking some pressure of the city’s ageing infrastructure. Excess stormwater not captured by the tree pits are collected and held in the underground retention areas before they are slowly released into the city’s stormwater system. 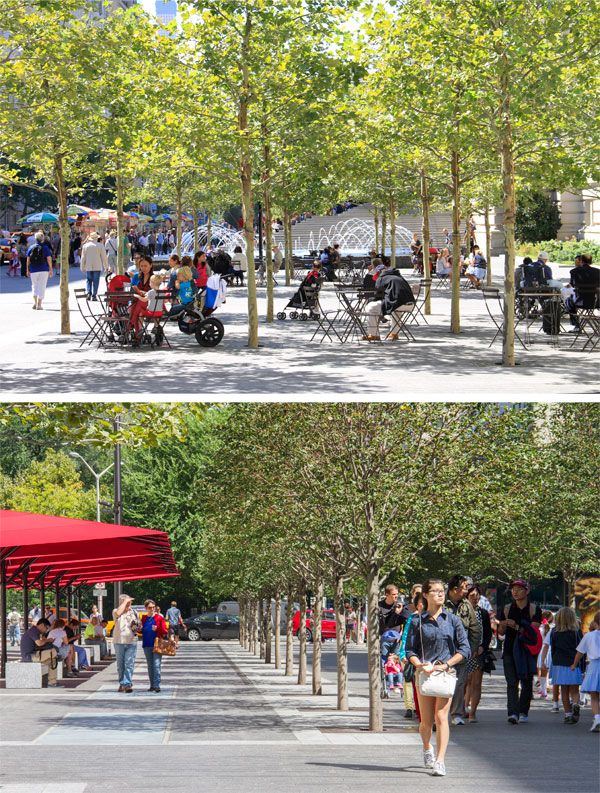 Watch the Space Change at Night In the evening, the ambience of the space is turned into an illuminated oasis that displays the museum as a work of art- from placing new lighting on the façade of the building, the grand stairs, the fountains and the landscape. We are then made to appreciate the shape and form of the building’s details as the landscape takes a step back from the limelight. 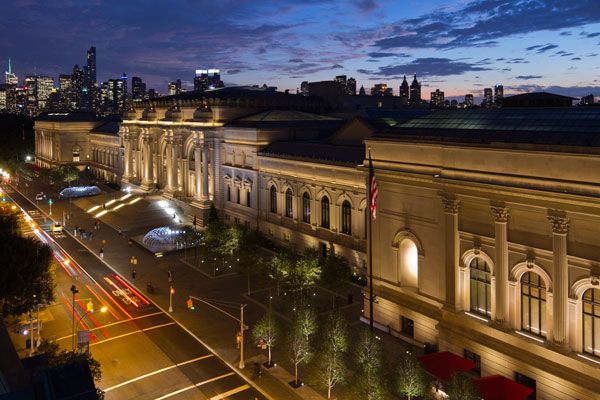 Unifying the Entire Site The plaza is unified its entire length and depth by paving of grey toned granite. There are many opportunities for people to stop their busy schedules to enjoy the atmosphere of the space and people watch through the provision of permanent and temporary seating, with some having parasols for shade. The integration of lighting means this space can be used well into the late hours of the evening. The Old and the New We also have to give some consideration to the old and the new- of course; this reinvention of the space came at a cost of replacing the old features of the space. To make way for the new era, the museum’s old linear long fountains, its cobblestone paving that embraced and encouraged movement, gave a sense of continuity and displayed a classic form of spatial design. 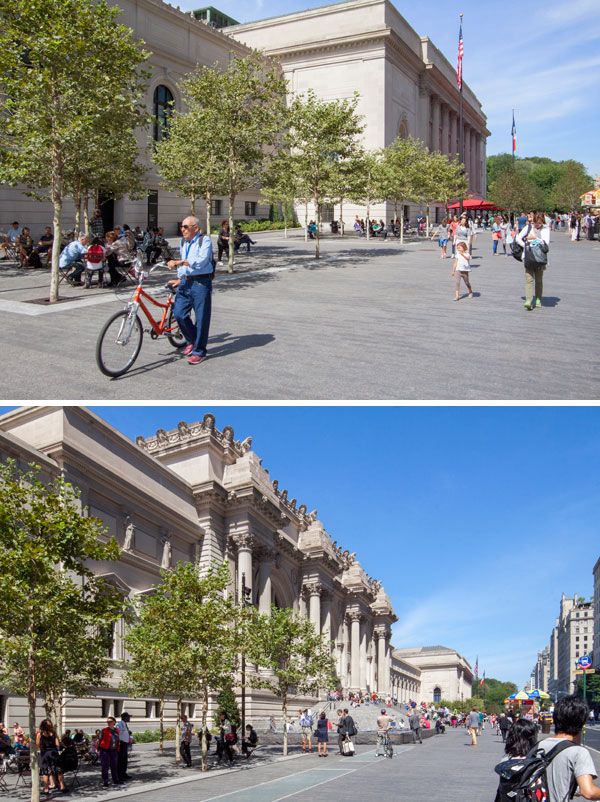 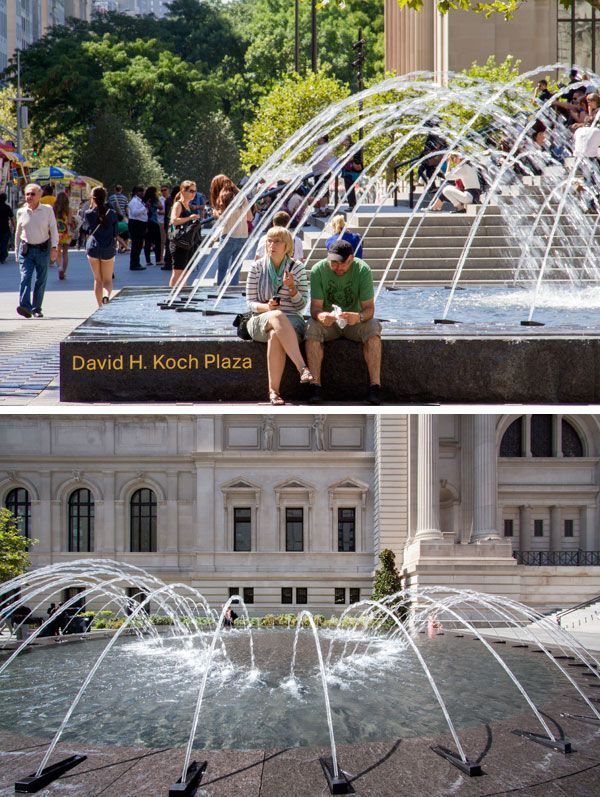 Taking a Risk on Change The new material palette, the additional seating spaces and the high arching play of the water may not completely reflect the historical façade of the building but it does encourage people to dwell more in the area and allow the space to turn a new leaf and embrace the modern city vibrations. Related Articles Featuring OLIN: 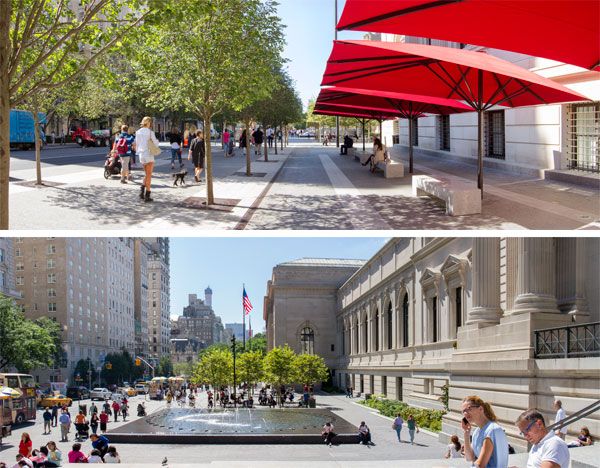 An Exhilarating Mix of People This area draws in an exhilarating mix of museum-goers, street performers and performance watchers from all over the city and all over the world. Although there has been a significant change, people are sure to find their way again, filtering through the length of the four city blocks and making this renewed public space their own. After all, as Jane Jacobs has said: “The ballet of the good city sidewalk never repeats itself from place to place, and in any one place it is always replete with new improvisations.” 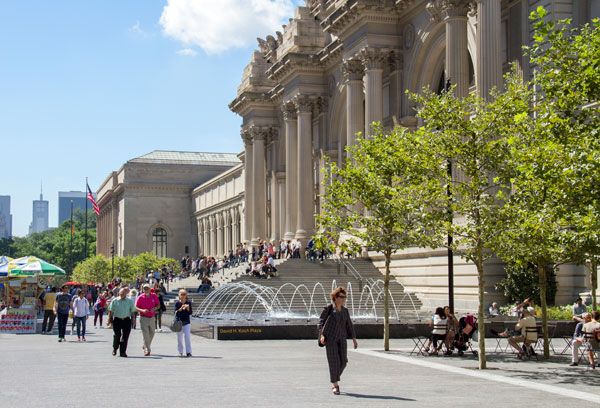