As one of the very first urban farms I discovered, Fresh City Farms in Toronto holds a special place in my heart. So it was with great excitement that I was finally able to sit down and interview Ran Goel, the Fresh City Farms Founder who perfectly captures the energy and spirit of FCF’s mission. In my interview, I asked Ran about FCF’s role in urban agriculture and its relations to landscape architecture. Read on for the full interview! 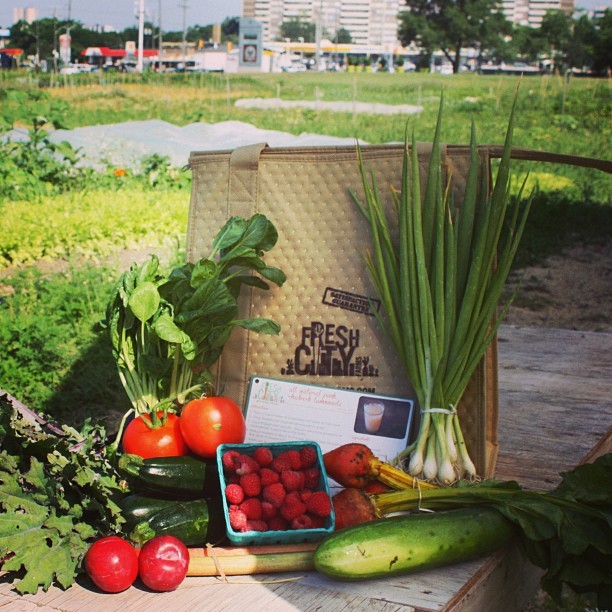 Example of the fresh produce and recipe card in the weekly food bags.

Fresh City Farms is Toronto’s ultimate urban food producer. With a mission to “create and perfect new ways to connect food makers and eaters,” the organization does an excellent job teaching, challenging and encouraging the urban community. Going above and beyond your average Community Supported Agriculture program, FCF offers a number of volunteer and educational opportunities to empower people to make healthier decisions about their food. 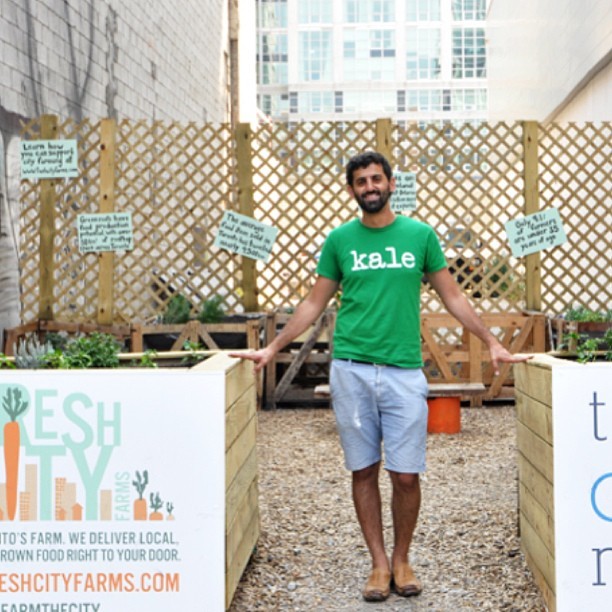 Founder, Ran Goel at the Farm Lot Premier in Toronto.

Five years ago, urban agriculture was not as popular as it is today. Fresh City Farms was the first of its kind in the urban food movement and delivery of local foods. How/why did you get into this? What was the catalyst for change into this lifestyle?

At the very core, we are connecting people with land and food production.  What attracted me to city farming was the idea of moving beyond reason so to speak — to basically plant an edible garden and let people join you. They may grab a shovel; they may just watch or perhaps just buy what you grew.  But they won’t be the same. It’s a way of empowering people by encouraging them to join or at least bear witness to the act of creation.  So the question for me from the start was — how do we make this happen on a larger scale?  Everything that followed is really to make it economically feasible.

A few weeks ago, FCF, with the help of TAS and The Detox Market, had an urban farm premier called ‘The Farm Lot.’ It was an amazing event, local food and artisanal vendors, and container gardening in the city. Can you tell us more about that and what you hoped it would accomplish?

We are looking to get food production in front of people, so that they don’t just see ads all day urging them to consume.  Partnering with TAS has been our initial attempt at creating a Fresh City style ad.  Successful city farming ultimately depends on key partnerships relating to land.  We cannot economically compete with other uses of land — that’s why there’s no farming in the city in the first place.  So we have to be creative in securing land to both grow and to promote what we do.  With TAS, there was a great fit where they had this unused vacant lot and a culture of embracing community into their developments. 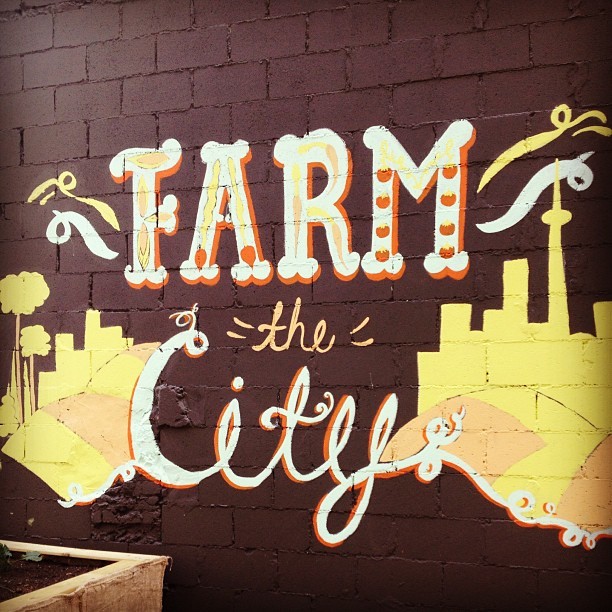 The  Farm Lot Premier in Toronto, painted wall, which can still be found at 369 King Street West.

Lots going on.  You got to keep swimming or you’ll sink.  We are focusing on several areas for the next few months.  One is extending and improving our educational efforts through workshops for the public.  Another is further fine tuning our member farmer program, which is the cornerstone of our efforts to help seed a new generation of farmers. We are also constantly looking to improve our produce bag members’ experience. Look out for a new book highlighting the environmental, social and economic impact of growing carrots the right way versus the wrong way.  As for events, we are always planning the next event, just check out our Facebook!

Tell us about the recent location expansion, and what you have on the new grounds.

Very high! Making food production ubiquitous is everyone’s job, not least landscape architects.  Food production has to be embedded into the planning, development and re-development process by everyone around the table.  Edible landscaping often won’t even be on the menu unless the LA points it out as a potential option.

Have you used a landscape architect for the design of the grounds?

Our farm manager, Phillip Collins, is a landscape architect, so his know how has been really helpful.  However, one of our limitations is that we do not have long-term tenure on any of the land we farm so making long-term plans or major changes is rather difficult.

What is your vision with food in the city? Where do you imagine it in 10 years? Do you think design will play a factor in the growth?

Cities cannot be self-sufficient.  Neither should they aim to be.  The role food in the city has to play is help build community, create human friendly places, reduce our environmental impact and make quality food production a part of our everyday lives.  We need to re-learn food production and cooking skills — not so we can all go back to the farm like most us would have been a century ago.  But because if our only connection with food production is the supermarket, we end up where we are today: lots of chemicals, lots of obesity, lots of diabetes and lots of eating alone. 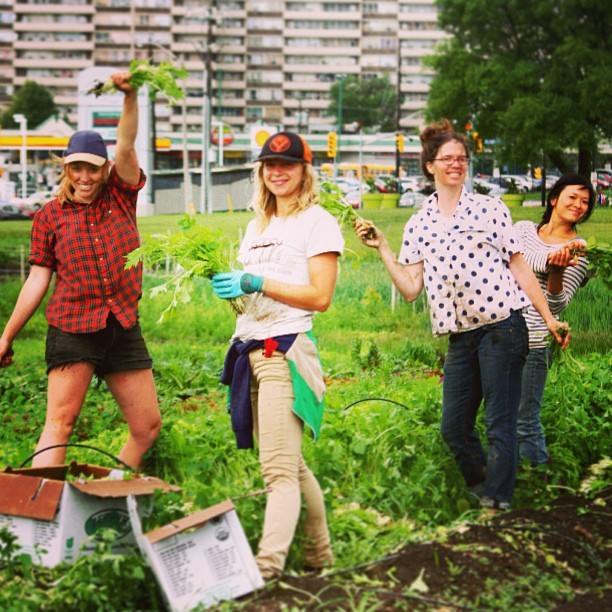 There are several commercial city farms in Toronto that produce a whopping 5% of the city’s produce needs.  Edible landscaping has flourished in private developments and public spaces.  Half of all Torontonians have visited a city farm.

However, without a place for food production at the design table, urban agriculture will never reach its full potential.  If we don’t do our part to market it and get it in supermarkets, no one will buy and support the movement.  As landscape architects, we can help put city farming and edible landscaping into the spotlight–will you help? 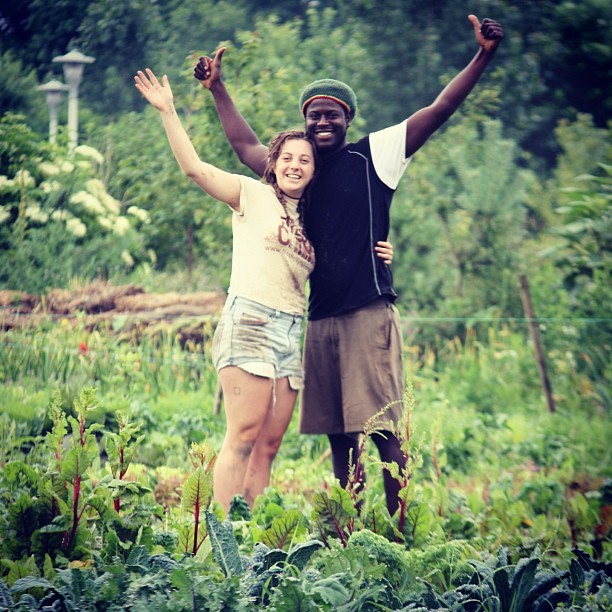 All images taken from the Fresh City Farms Facebook page.

How do you think urban agriculture will the shape the world in the next 10 years? Will design play a large role in this? Comment down below!