Roof windows give the most light

After three years of theoretical and practical work, the Danish Building Research Institute (SBI) has published few years ago “The Study on Daylight” in which it is confirmed that roof windows create the biggest factor of daylight, twice as much as vertical windows, and even thrice as much as windows on roof bulges.

The company VELUX has stated for many years that roof windows placed on roofs at an angle of 45 degrees give as much as 40% more light than those on bulges. But, the calculation and tests prove the difference is even greater.

SBI is a state institute under the sponsorship of the Ministry of Economic and Business Affairs in Denmark, and the study was conducted with the support and assistance of the company VELUX.

The study had a large number of simulations done for each window in three separate rooms with cloudy, moderately cloudy, and sunny weather conditions.

As a tool of analysis, they used a system of lighting simulation. They compared the conditions of daylight in different types of windows, along with tracking a large number of lighting parameters. Even without a universal definition of daytime lighting quality, the results gave clear indication of which room was the lightest, where glare was a problem, and which type of windows would give the best variation for lighting.

In the study, three identical rooms were used, with a floor surface of 12,5 m², and a floor to ceiling to height of 2.5m. They had windows of identical surfaces, that is 1,3 m², and a window/floor surface ratio of 10%. The windows were built in with an identical parapet height (1m), and the rooms had identical reflection powers of the ceiling, floor, and walls.

The second phase of the research showed that roof windows give the least glare with acceptable transitions of light when looking towards the window – while dormer windows created a tunnel effect, which has a more focused beam of light and lower lighting values in the room.

The study also took into consideration the need for solar dimming and blind effects. The roof window had a more direct lighting during the summer, and during the winter it allowed less direct sunlight in, compared to the vertical window.

When it comes to energy, it shows that it is better to use a dimming device during the summer (to prevent overheating) than in the winter when the benefits of the warmth and light from the sun are welcome.

The study shows that the use of external blinds is a very effective solution for solar dimming, and that it reduces the risk of glare happening.

Main findings:
The roof window let significantly more light into the room than vertical windows in all periods, except when the sun was at a height of under 25 degrees (winter/sunny).

The average daytime lighting factor, in percents, in a horizontal level at 0,7 meters above floor level, at 12:00 for the period December-June.

The cumulative distribution of frequencies for the daytime lighting factor (in percents) in a horizontal plane, at 0,7 meters above floor level, under cloudy weather conditions.

Main findings:
This result is important because the factor of daytime lighting was measured under a cloudy sky, weather conditions that are present in Denmark 65% of the time.

This variation can be better because previous research has determined that people like it more when their interiors have a dose of “visual lighting” combined with a certain degree of “visual interest”.

About levels of daytime lighting factors

According to a British Lighting Guide (CIBSE, 1997), the average factor of daytime lighting of 5%, or more, will make your interior look significantly lit.

The average factor of daytime lighting of 2% often makes the room look boring; electric lighting will probably be used often.

According to the British Regulations, these are the lowest recommended average daytime lighting factors:

Main findings:
Higher daytime lighting factors have important implications for visual performances (the ability to see well because there is a sufficient level of light).

The look of the horizontal plane at 0,7 meters above floor level, thermographic and a depiction of isolux contours that show illumination (lux) in cloudy weather conditions. The external horizontal of illumination was 14,613 lux (divide with this number to get the daytime lighting factor).

Higher daytime lighting factors have significant implications in terms of energy savings because it implies that artificial lighting will be turned on less frequently with built in roof windows.

Low illumination and daytime lighting factors that were measured in dormer windows have significantly affected visual performances, creating a need for turning on artificial lights more often, or increasing the surface of the windows (both have a negative impact on energy savings).

Main findings:
The roof window allowed acceptable transitions in lighting when looking at the window, because of the linings that surround the window, as well as the reflecting of the light of the back of the room, towards the wall where the window is.

Average Illumination inside a 40 degree ring, centered around the eye of the beholder, looking directly towards the window, in cloudy weather conditions. The roof window gives greater illumination to the wall and mild illumination transitions from the window to the visual area, compared to other windows.

Main findings:
The dormer windows created a tunnel effect, letting a concentrated beam of light and lower levels of lighting in the room, with darker, murkier interior surfaces.

The need for dimming

Additional findings:
The roof window has given a very large ratio and intensity of direct sunlight areas during the summer, which means that the need for using products for protection against the sun, in that period, would be acute. 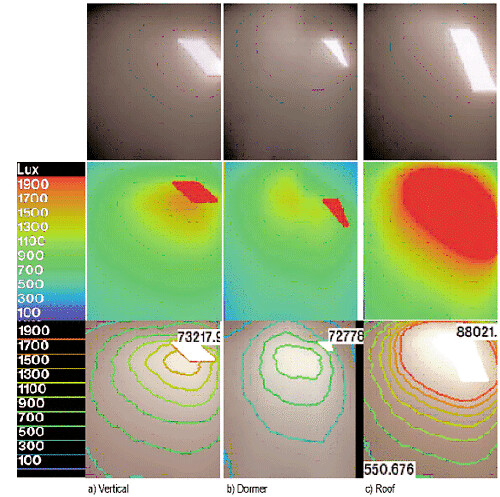 Windows facing South, in sunny weather conditions in June at 10:00

The required level of dimming throughout the year: 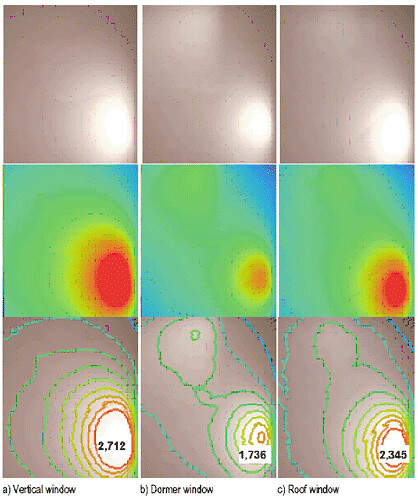 Windows facing South in sunny weather conditions in January at 10:00

From an energy viewpoint, it’s better to use dimming products during the summer (to prevent overheating) than during the winter, when the benefits of sun warmth and sunlight is welcome. 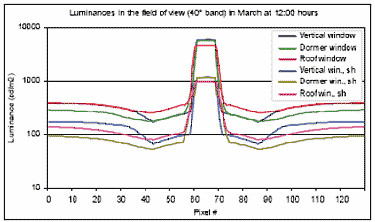 Illumination in the visible field, when the look was directed towards the window, in March at 12:00 with windows facing South. The lower three curves (SH) show the average illuminations with dark-gray cloth curtains.

The effects of blinds 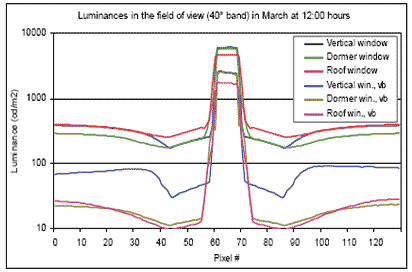 Illumination in the visible field, when the look was directed towards the window, in March at 12:00 with windows facing south. The lower three curves (vb) show average illuminations with blinds, with slats set on the position of rejecting direct sunlight. Except for the top of the window, the general level was reduced to less than 5% when the blinds were used.

Additional findings:
The screen reduces glare (DGI value) significantly, while blinds increased the DGI for all windows. The reason for this can be that the illumination of window surfaces is reduced to one third, while the illumination on other surfaces fell to 1-2 percent. 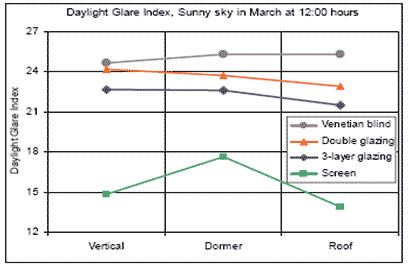 Calculated values of shine for the Daytime Glare Index, DGI, for two types of windows – with single and double glass, with two used dimming devices.

Additional findings:
The result of lighting with furniture is that rooms with roof windows were significantly better lit, which is also confirmed with a thermographic depiction. 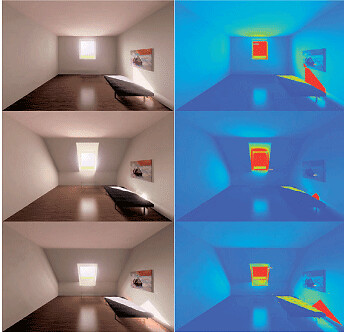 Pcond values and thermographic depictions of all three rooms with furniture.