Designer Amir Schlezinger Creates an exquisite  Japanese Garden This 3,000-square-foot private garden is nestled on the Eastern boundary of a 1.5-acre site in the middle of the Essex countryside, just an hour’s drive north of London. The owner, a software developer, was inspired by a visit to Japan. He wanted to recreate the peace he felt at temple gardens — the plants and rocks, the disciplined raking of gravel, and the sound of water. He had taken his family to Japan during the school holidays, and he wanted his own garden to not only represent the family unit, but to blend with his contemporary ideas and with the soulful tradition of ancient Japanese gardens. The Site The client had acquired the site a few years earlier and had restored an old barn and its outbuildings, using oak beams, black cladding, slate tiles, and flint walls. This is the family’s country home during the weekends; weekdays are spent in a high-rise penthouse apartment in the center of London. Their weekend home is the ideal peaceful family retreat, with all the children could wish for: a place to run around, fresh air, a pool, and a sports barn. The site is close to Stansted Airport, handy for business travel, but now that work is less on the agenda and the children are older, the client wanted to create a Japanese garden in which to indulge peace. 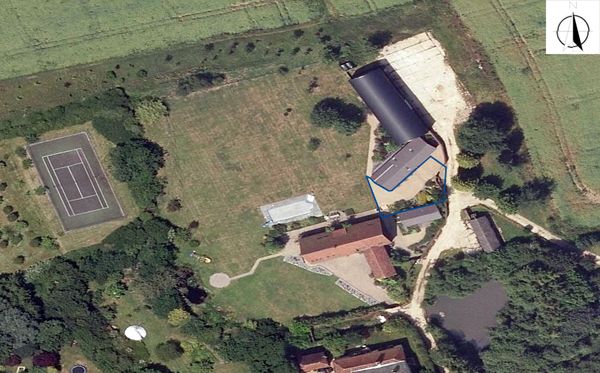 The site for the Japanese Garden

The plan links the four boundaries of the site, all set at different angles, and responds to the existing character of the architecture. The site runs east to west and is surrounded by two building and a perimeter wall and is open on the western side. The orientation of the sun is ideal for growing Japanese woodland plants. Initially, the ground was pretty level and laid to paving, allowing access to the buildings but serving not much of a visual purpose. Lowering a large part of the space as a sunken garden gave it a temple feel and allowed for a better edge definition. 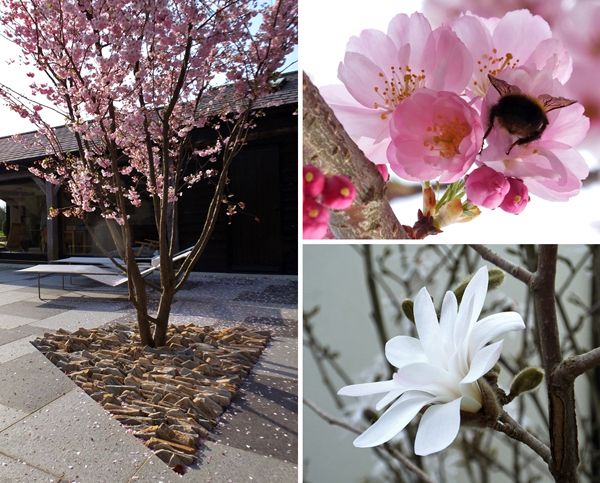 Retaining the existing tree in the Japanese garden.

There were no features to retain — it all had to go, except for one mature tree, ideally situated in the corner of the space, giving it a feel of maturity. Most of the plants used are Japanese species such as maple, camellia, holly, ferns, cherry, miniature grasses set in the deck, and bamboo. Two floating hardwood decks feature in the lower temple area, providing platforms to view the countryside beyond over the swimming pool by the main house. The decks are linked by raised paths made of reclaimed York stone, its tone mediating the dark granite with the tone of the wood. 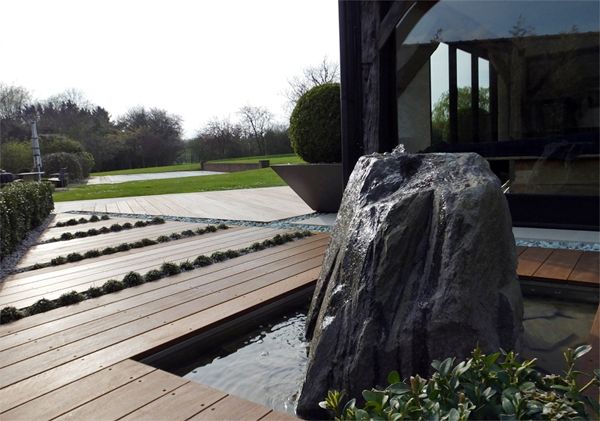 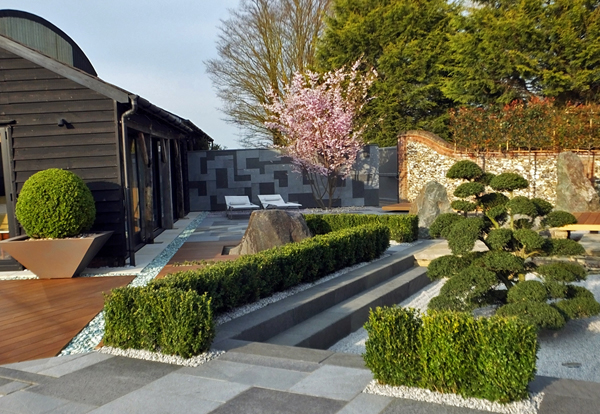 Japanese garden in the day 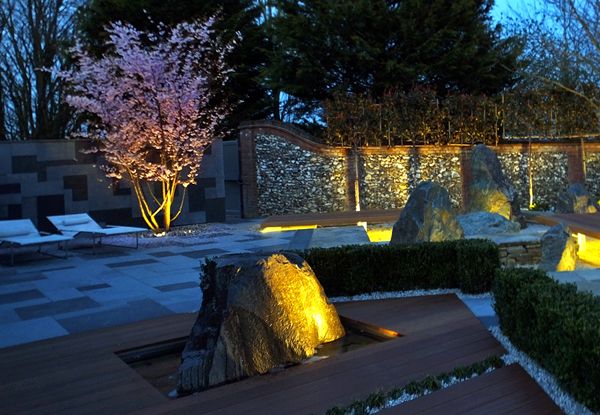 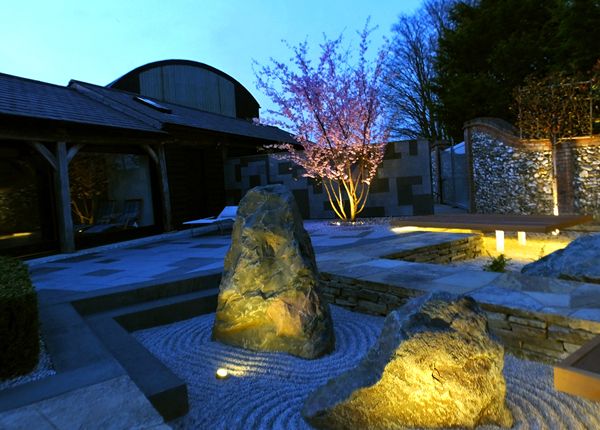 Ambient tones set the pace of this Japanese garden

Getting it built  Cranes were crucial to lift materials into the garden. Heavy pieces were then lifted by hand with hydraulic handheld lifting gear. The project took three months to build during the wettest English winter. Approximately 50 tons of rubble and clay had to be excavated to make room for 60 new tons of materials: a dozen different kinds of natural stone, aggregates, timber, and rocks. A sequence of six red-green granite rocks is situated diagonally to symbolize the family, decreasing in size and concluding in the foreground with a low granite rock set as a waterfall. Black and gray flamed granite feature in the random paving patterns culminating in the focal point wall, which has a three-dimensional quality where the stones protrude at random. The garden is irrigated automatically to assist and maximize plant growth in a site that is quite exposed to drying winds. A low-voltage LED lighting scheme is programmed to switch on after dusk during the weekend, welcoming the client as he arrives from London and generating dramatic silhouettes through architectural foliage onto the surrounding walls.

Before and After, the journey of this Japanese garden

Legacy Creating this garden in this specific location was a great challenge for the whole team, which was assisted by a supportive and creative client. The process enabled a new blend of old traditions with new techniques and design approaches. Sourcing materials and plants for a Japanese garden in the UK is a difficult task and one that is not without compromise. A few tweaks were made along the way from the initial concept to the finished garden. Yet with the client fully embracing the ongoing care for the space with creative raking, pruning, and general maintenance, the garden will hopefully remain as timeless as the concept behind it. Text and images by Amir Schlezinger Check out his website mylandscapes See more designs and updates from Amir on the mylandscapes Facebook page Recommended reading: Japanese Gardens: Tranquility, Simplicity, Harmony by Kimie Tada Japanese Garden Design by Marc P. Keane   Published in Blog