Fellow Land8 writer Tony Ignacio and I attended Dwell on Design at the Los Angeles Convention Center June 21st through the 23rd. Our own summary of this annual design extravaganza can be found here. As promised, we now provide you with an entirely subjective (and in no particular order) list of what we believe were the Top Ten Talks of the weekend. We also believe that it is fitting for our list to be rather landscape centric.

1. Keynote Address by Michael Graves:  The thread that ran through Michael Graves’  address was his recollection of the two years he spent in Rome at the American Academy as a Prix de Rome Fellowship recipient and the influence that time has had on his life’s work. He spoke for almost an hour and a half; seemingly with no notes or cue cards. At almost 80 years old, his energy is enviable, his story telling epic, and his sense of humor spot-on. He pulled no punches when it came to his opinion regarding Target, JC Penny (one of D on D’s main sponsors), Harvard GSD, the borrowed view, and an ex-girlfriend or two. He also discussed his paraplegia and the effect it’s had on both his home product and architectural design work. This keynote address by Michael Graves was one of the best keynotes I’ve ever attended. 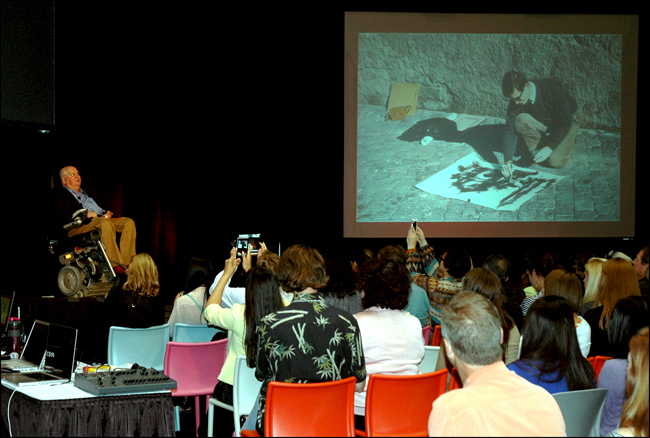 Then and Now. Keynote speaker Michael Graves alongside a projected slide of himself as a young Prix de Rome Fellowship recipient.

2. *Landscaping The Classics:  Bernard Trainor of Bernard Trainor and Associates and Ive Haugeland of Shades of Green LandscapeArchitecture shared their inspiration, philosophy, and the practicalities of creating contemporary landscape architecture for Mid-Century homes. Both Haugeland and Trainor apply the tenets of modern design to their own landscape design work. To paraphrase one of Trainor’s slides they; “allow the function of a space to inform the elegant effects and patterns that will follow”. The resulting landscapes of both firms are certainly inspired by; yet do not imitate the landscape schemes of the past. 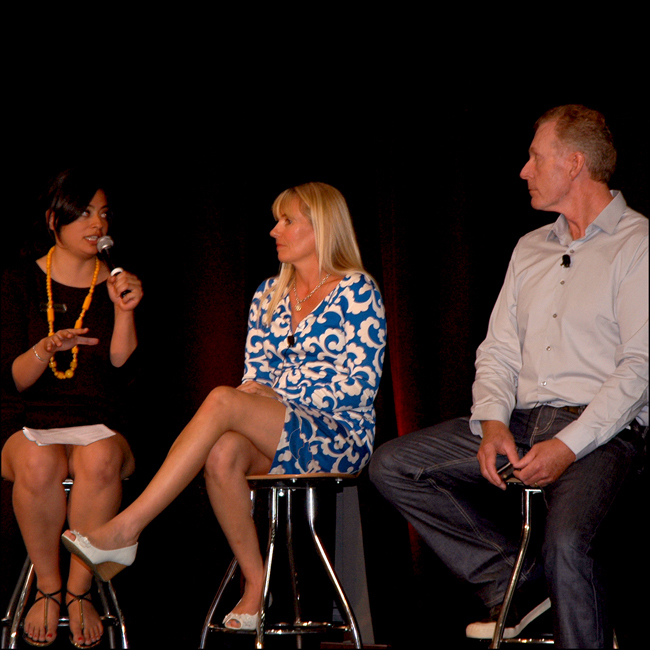 3. *Native Plants and California Landscapes:  FormLA’s  Cassy Aoyagi and Wendy Proud of Mountain States Wholesale Nursery discussed the beauty, appropriateness, and water-wisdom of installing California native plants into the residential landscape. FormLA has trademarked a lawn mix called “IdealMow” that can be formulated specifically for a general region, vicinity, or a specific microclimate, while MSWN’s “use of desert-adapted plants as landscape materials” has been on the leading edge of landscape architecture in the arid west for more than 40 years. 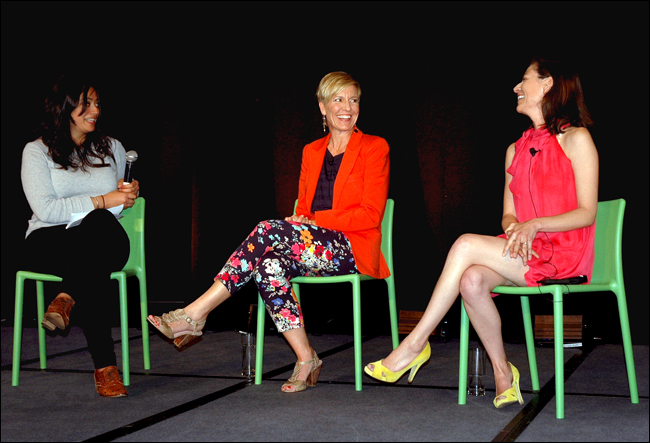 4. Can Disaster Spur Innovation?: Kate Stohr, Managing Director, and Sherry-Lea Bloodworth Botop, Senior Development Advisor, of Architecture for Humanity described their rebuilding efforts in Biloxi, MS., after Hurricane Katrina. Their experiences highlighted the complex nature of these ventures and their stories underscored the importance of design in making communities better and stronger, emphasizing the need for designers to play a key role in disaster relief efforts.

5. *Born to Rewild: Green City Schemes: Landscape Architect and educator Margie Ruddick, described her fascinating experiences creating ‘wild’ landscapes in urban environments. She described how society’s perception of parks is gradually changing and that wild landscapes are also seen as places to recreate. She further explained how we as humans connect with nature and how this connection has a positive effect on our well-being. Ruddick finished by saying that wild landscapes can also benefit our wallets by costing less to maintain over time, and most importantly, how they improve the overall condition of our environment.

6. *Treehouse Workshop: Peter Nelson of Nelson Treehouse and Supply Co demonstrated the methods and materials for his treehouse construction system. He also spent time explaining his approach to city planning and building codes. Who can resist the intimacy and sanctuary of a treehouse high above the din and away from all the kids?

7. Never Built Los Angeles: This talk was given by Jenny Myers of Clive Wilkinson Architects and the design firm Myers Collective; Tibbie Dunbar, the Executive Director of A+D Architecture and Design Museum; and Sam Lubell, editor of The Architect’s Newspaper to coincide with Architecture and Design Museum’s exhibit of unrealized architecture, urban design, and regional-scale landscape proposals for the Los Angeles region. As co-curator Sam Lubell said; one important reason for this type of exhibition is to inspire “by example of consequence” and missed opportunity. Although, included in the exhibit is a proposal to extend the Santa Monica freeway into the Pacific Ocean and continue running parallel to the coast on man-made islands, reconnecting with land somewhere in Malibu. So not all has been lost by omission.

8. *Kinetic Energy: The Plan Behind The Lights At LAX; Artist Paul Tzanetopoulos discussed his inspiration and process of creating the iconic light towers at LAX. Paul described how the process was truly a collaborative effort, and surprisingly he was the only entity to make it through the whole LAX Gateway Design process from start to finish. The colors represent the diversity of the Los Angeles region and are described as color therapy. The LAX lights project is an excellent example of public art at its finest. 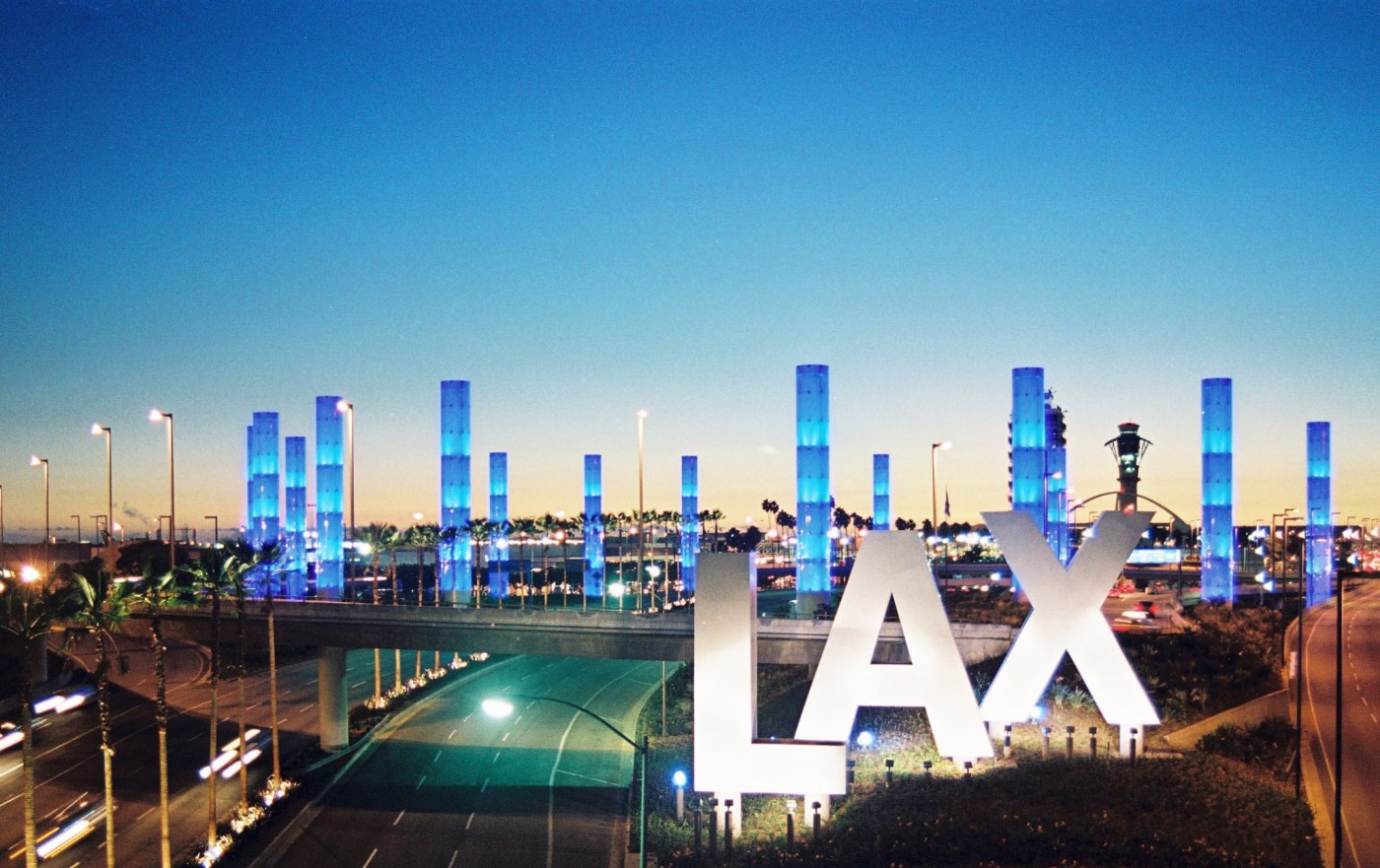 9. A Confederacy of Heretics: Architects Frederick Fisher, and Coy Howard discussed the reality and the myth behind their (and others) influence on contemporary architecture in Los Angeles. Fischer and Howard, along with Eugene Kupper, Roland Coate Jr., Peter de Bretteville, Frank Dimster, Frank Gehry, Eric Owen Moss, Thom Mayne, Michael Rotondi, Craig Hodgetts, and Robert Mangurian, were an unaffiliated group of bold, young (i.e. inexperienced) architects who changed the façade of late 20th century architecture in Los Angeles. This talk was in conjunction with a current exhibition at SCI-Arc titled Modern Architecture in L.A.: A Confederacy of Heretics: The Architecture Gallery, Venice, 1979 which runs through July 7th. 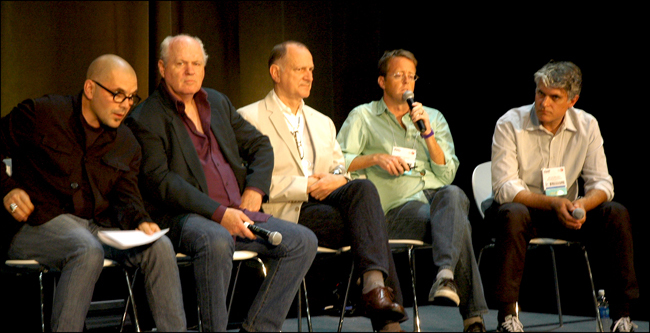 10. Information Graphics, From Page to Memory: Andy Disl and Josh Baker, two Art Directors from Taschen discussed the cover designs on a number of their most successful books. Their discussion focused on how they use content based graphics along with size, format, and materials, to entice, inform, and introduce the pages within the book to the reader.  I’ll always remember flipping through the real paper pages of my first Taschen book, Albertus Seba’s Cabinet of Natural Curiosities. At the time, I never considered that this tactile experience may one day become an esoteric activity. 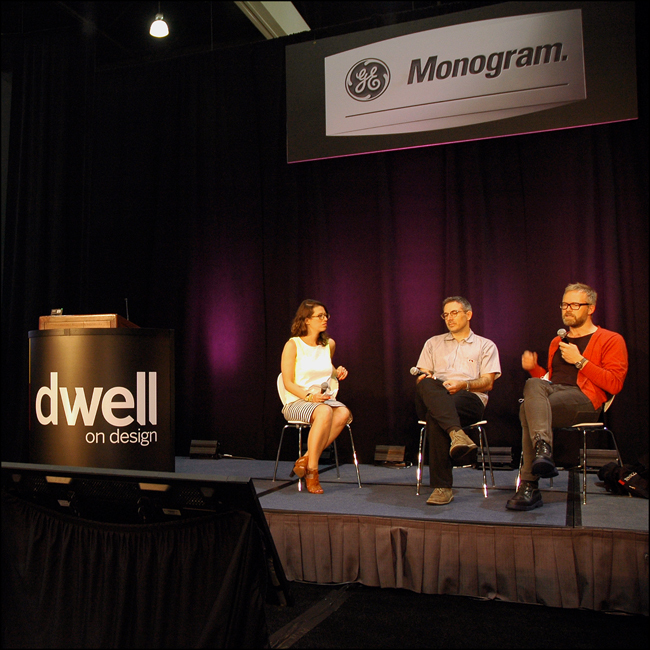 Tony Ignacio and I will be posting interviews with Cassy Aoyagi, Bernard Trainor, Margie Ruddick, Peter Nelson, and Paul Tzanetopoulos on future posts.

Lead Image: Michael Graves on stage at Dwell on Design.

All images by Mitch Howard (except LAX; courtesy of LAX Facebook page).

Were you at Dwell on Design?  Tell us what you thought of the talks in the comments below…