We take a closer look at the highly controversial topic of fracking. This is a great chance to delve into a truly hot topic that leaves nobody indifferent. You have probably heard about the controversial energy technique known as “fracking”, which is being used more and more often around the world. What exactly is fracking? Hydraulic fracturing allows us to access shale gas, which is mainly methane locked in a deeper rock stage beneath the Earth’s surface. The process consists of drilling vertical wells that turn horizontal underground, opening tiny fractures in deep rocks into which high-pressure chemical fluids are injected. The gas then escapes through the fractures and is collected to be used as an energy source.

Here we have prepared a list of carefully chosen points about the fracking phenomenon. What do the numbers tell us about water safety? According to the U.S. Environmental Protection Agency, one fracture could require the use of 2 million to 5 million gallons of fresh water from the nearby area. During the process, more than 315 tons of toxic chemicals are mixed with the water to form the fracking fluids. In the end, waste fluid is supposed to be removed to open pits or tanks, but the EPA says 20 percent to 85 percent remains underground, resulting in the possible contamination of drinking water sources. 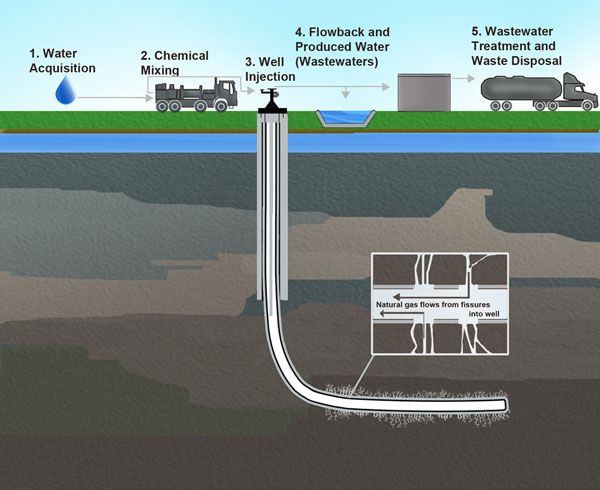 Looking closely at the chemicals Here we have one of the most sensitive questions about fracking fluids. More than 700 known chemicals are involved in the process, and more than 4 percent of them are regulated under SDWA and Clean Air Act standards or marked as carcinogens. These include methanol, benzene, and toulene. “secret trade.” But what is even more perplexing, a congressional report found that more than 11 percent of chemicals used in fracking are unidentified components hidden behind a “secret trade” label. WATCH ME: Fracking Hell: The Untold Story

The background of the fracking boom The technique as we currently know it is only 16 years old. It was developed in Barnett, Texas after Mitchell Energy spent almost 20 years improving the process of accessing shale gas. The company first applied hydraulic fracturing technology successfully in 1999, but it took three more years for general industry to look at fracking as a large-scale and advantageous method of extracting the gas. The sustainable footprint According to the U.S. Energy Information Association, the United States could be energy self-sufficient by 2035 because of its shale gas reserves, which are supposed to reduce dioxide carbon emissions to the atmosphere. However, because fracking activity produces methane leaks, being 25 times more toxic than carbon dioxide, and coal production would be available to export, the sustainability factor may be misleading. How fracking transforms landscapes On average, each well translates to ground consumption and heavy truck traffic. The associated facilities redraw undeveloped natural habitats into fragmented industrial scenery, like this one in Wyoming. Those cleared lands also have knocked on the door of protected public fields, such as Theodore Roosevelt National Park  in North Dakota and other high-value places for wildlife and nature conservation. WATCH ME: A Boom With No Boundaries: How Drilling Threatens Theodore Roosevelt National Park

World map of shale gas As this EIA report reveals, China, Argentina, and Algeria lead the shale gas geography in terms of recoverable reserves. However, they do not have suitable infrastructure and technology to take advantage of the potential yet, so the United States jumps into the first position at the moment, attracting special attention to the Marcellus Shale formation.

Innovative alternatives are needed, and one of them proposes using biodegradable polymers in fracking fluids to prevent residues from remaining underground. The University of British Columbia also is studying an interesting method to reuse wastewater and produce salts for the fracking process out of carbon dioxide. Most unexplored reserves of shale gas are under our feet. But it is important to keep our eyes up to look at the most unexplored effects of fracking on our landscapes. Recommended Reading: