Article by Nour Adel Darling Quarter, Sydney, NSW, Australia, by ASPECT Studios, in Sydney, NSW, Australia ASPECT Studios has completed a transformation of the public domain of Darling Harbour South, one of Australia’s most visited destinations. This public domain project now known as Darling Quarter was commissioned by the Sydney Harbour Foreshore Authority (SHFA) and Lend Lease. It is a major 1.5 hectare place-making project for Sydney with a retail terrace, public park, two 6-star commercial buildings and an innovative children’s playground which acts as its centrepiece. At over 4000m2, the playground is the largest in the Sydney Central Business District and with its interactive water play facilities, this civic space has become a regional attraction for Sydney. “The time is not far off when companies will have to justify their worth to society, with greater emphasis placed on environmental and social impacts than straight economics.” –Dick Dusseldorp, Lend Lease Founder, 1997 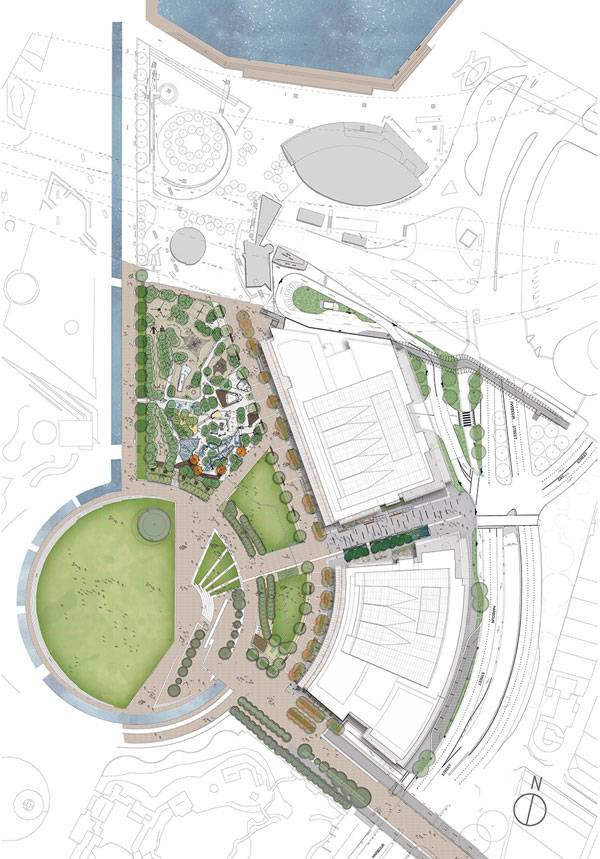 ASPECT Studios’ Darling Quarter does not only create a huge public space and gigantic interactive playground, it plays a huge role in giving back to its community and demonstrates corporate social responsibility within an urban design scale, which is becoming highly necessary in the last few years, along with the goal of creating sustainable cities. Darling Quarter sets a new standard for achieving economic and social sustainability whilst becoming an easily accessible and simple-to-reach destination for people coming from any part of the city. 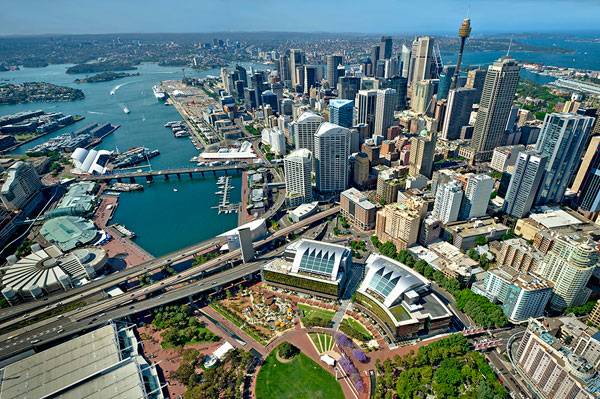 This contemporary-design park not only offers the most spectacular free kids playground, it provides a peaceful community green and a variety of cafes, a wine bar and fresh food, including takeaway outlets showcasing authentic cuisine from around the world. The park also includes a large theatre called the Lendlease Darling Quarter Theatre. Through innovative and dynamic adaptations of Australian Stories, the theatre hosted by the Monkey Baa Theatre Company offers shows for young audiences and those young at heart. 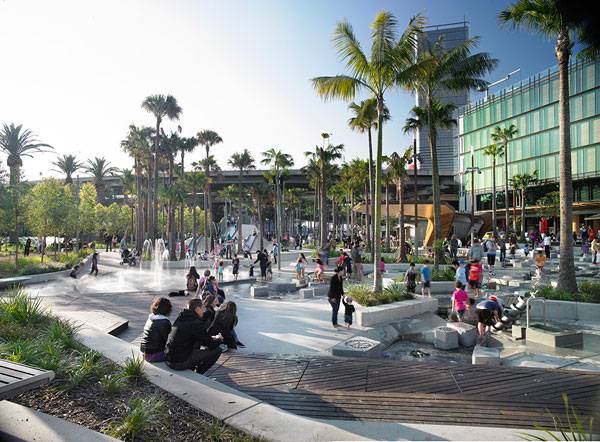 Rejuvenating Sydney Darling Quarter serves its main function in building a strong pedestrian link to the city and reinforces the movement between the Entertainment Centre, Cockle Bay, and beyond. The project further reinvigorates the Darling Harbour area by upgrading ground plane materials, lighting, furniture, and planting, and sets a new benchmark with an emphasis on premium quality and highly sustainable initiatives. 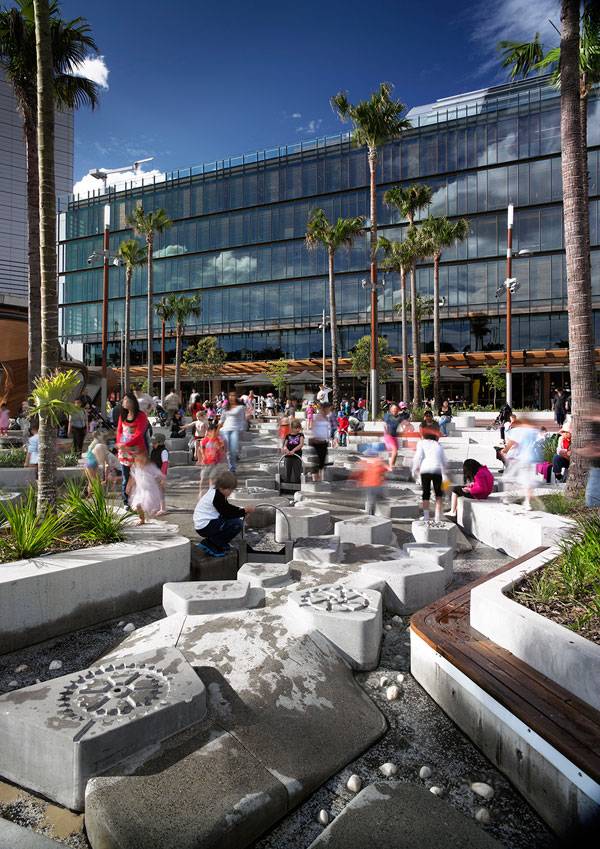 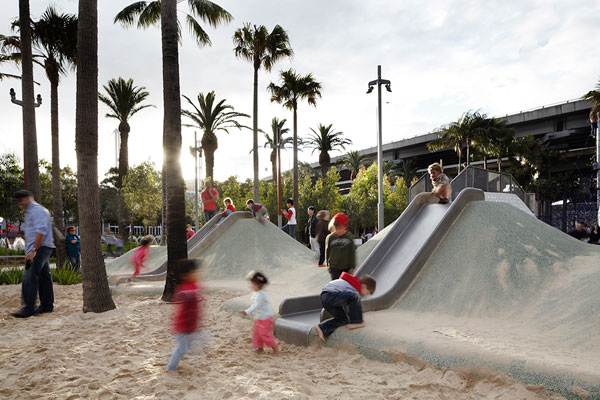 In addition to an extensively redesigned playground, it provides generous grassed community areas and plantings, civic water features, and a children’s theatre. The Darling Quarter public space provides an attractive, lively platform for people of all ages to meet, converse, play, watch theatricals, and meet people from different cultures in a safe and vibrant community. Parents can enjoy watching their children play in the water games or perform in a theatrical play. Due to this revitalization, Darling Harbour is now safe and lively both by day and by night. A range of different initiatives have been implemented including an enlarged park, table tennis tables, moveable public seating and rugs, and a lighting master plan which enriches the night-time experience. A Civic Connector The park has been located in a strategic spot in the city of Sydney. It occupies a pivotal location in the Central Business District which connects the two sides of Sydney together and gives a unique spatial definition to this urban area. 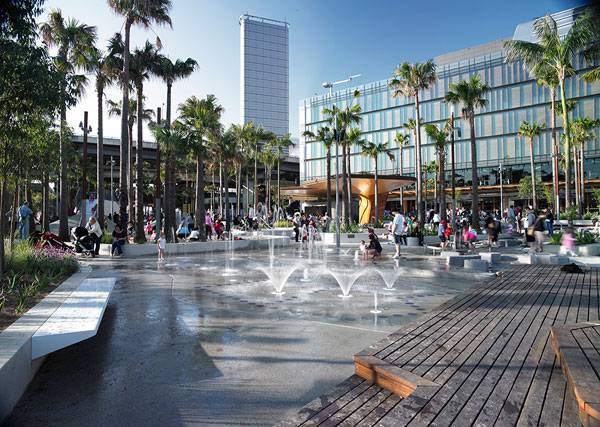 The park builds a strong civic link to the city via the creation of a new pedestrian street – called the ‘civic connector’ – which connects Tumbalong Park to Bathurst Street and Town Hall. A second pedestrian link – the Pedestrian Boulevard – reinforces the movement between the Entertainment Centre, Cockle Bay and beyond and prioritizes the pedestrian connections throughout the site. 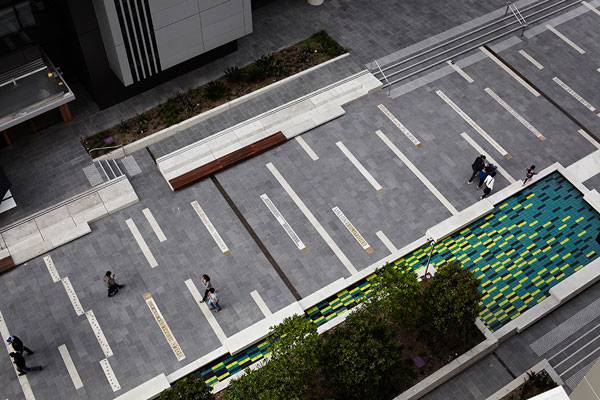 As mentioned previously, at over 4000m² it is the largest play space in the Sydney Central Business District, and with its interactive water games and facilities it will strengthen Darling Quarter’s reputation as the most attractive tourist destination in Australia. The play area has been designed to feature innovative ways for the children to play, learn, and expand their imaginations. The children will have loads of fun exploring the unique equipment, which has been engineered with safety in mind. The park “welds” the city together, playing a huge role in the making Sydney an interconnected, socially sustainable city. 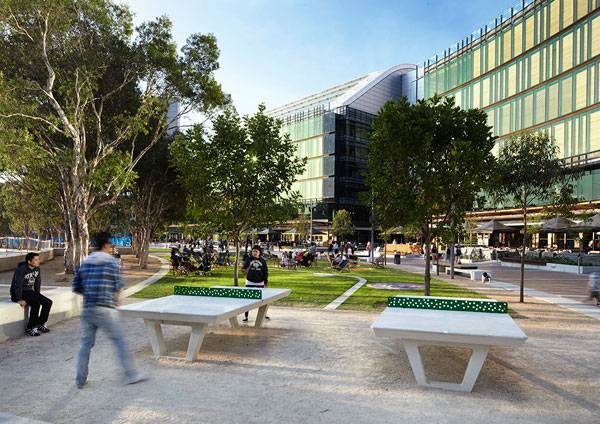 The Darling Quarter represents a large-scale unique civic space that is not only considerate of the user’s social needs, but also successfully creates an attractive unified space by linking the two sides of the beautiful city of Sydney together. It maintains the reputation of Sydney being the most visited city in Australia and one of the most popular, most tourist-friendly cities in the world. Could this design approach be setting a new standard for the upcoming sustainable urban design trends? 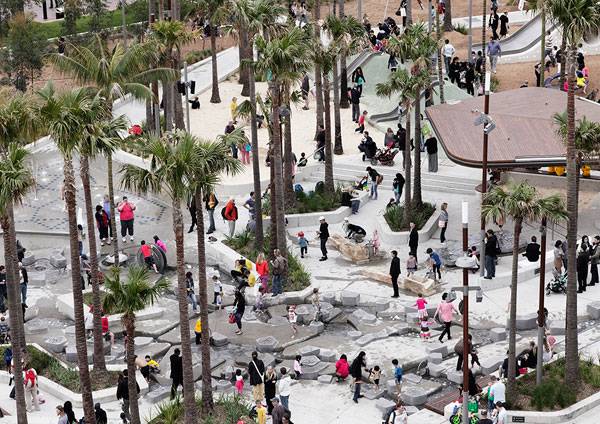