Place de la Fontaine Chaude designed by OKRA in collaboration with OTC Engineering, AAPP Architects, in Dax, France.  At a time in which the global water supply is running out, it is hard to believe there are millions of liters of water flowing from a fountain in a city’s downtown. Dax is a small city established by the Romans in the 1st century AD, located in the southwest of France, and well known since Roman times for its thermal waters. The legend of the “Legionnaires’ Dog” illustrates the discovery of Dax’s waters’ healing abilities and the birth of hydrotherapy. According to the legend, a legionnaire stationed in Dax left his dog, crippled from rheumatism, in the river before leaving for battle. After he returned, he found his dog rejuvenated by the thermal mud. Today, the city lives up to its tradition and is one of the top health resort destinations in France, due to its waters’ rheumatism-treating qualities. 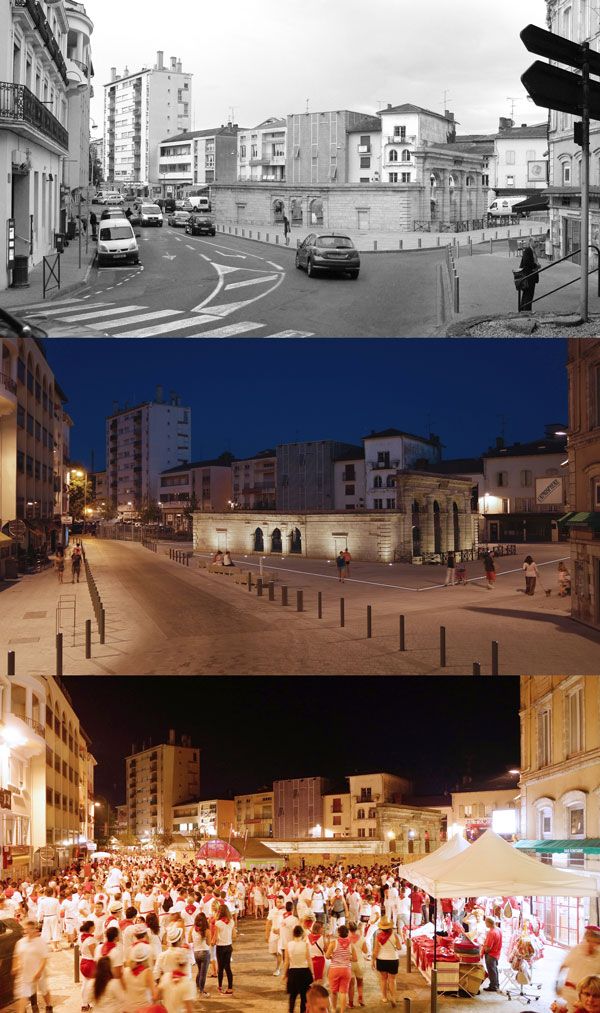 The transformation in pictures. Photos courtesy of OKRA

Located in the heart of the city and built in 1814, La Fontaine Chaude is the genuine symbol of the resort. As reported by the Dax  Commune, 2.4 million liters of water flows from the fountain, with temperatures reaching up to 64 degrees Celsius. Approximately 60,000 hydrotherapy patients go to the local thermal spas every year. In 2010, in an attempt to improve the citizens’ quality of life and increase tourism, the district decided to revitalize the La Fontaine Chaude and its surroundings. 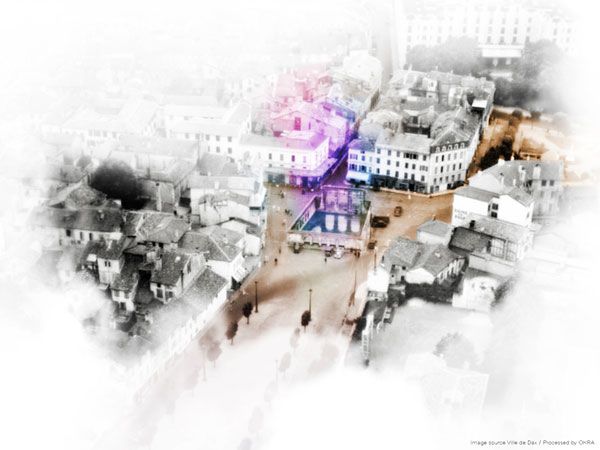 A Two Phase Project The project was entrusted to OKRA. Originally, the revitalization project was divided into two phases of construction: the first one, with approximately 1.5 hectares, includes the central area — or esplanade — on the east side of the Fontaine Chaude portico, and it was completed in 2010 after two years of construction. The second phase, with 1.5 hectares total, has been divided into two: the central area on the east side of the Fontaine (stage A) and the “Place de la Course” on the north side along the city wall (stage B). 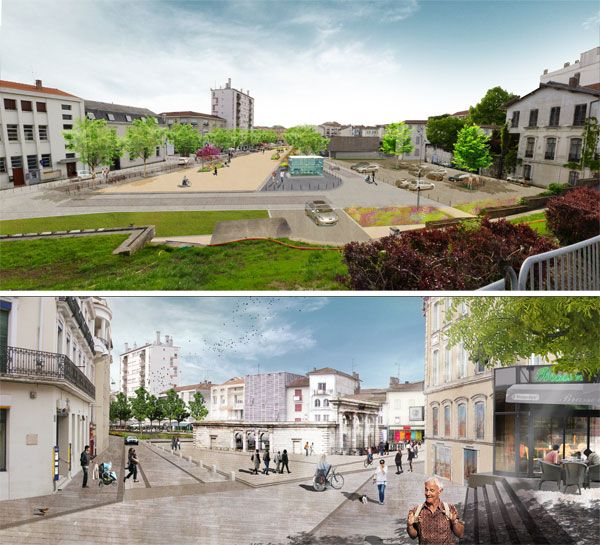 The First Phase In the first phase, OKRA brought Dax’s downtown back to life with a great solution. The project concept seems simple and intuitive: to make cars and pedestrians co-exist harmoniously on the same carpet. Looking for a pedestrian-friendly platform, OKRA made the level of the street even with the level of the sidewalk. With this simple but fantastic solution, the area became more integrated, forcing all road users to slow down and look out for other users, improving safety while making the environment much more pleasant for everyone. Additionally, this solution further highlighted the La Fontaine Chaude, recovering its position in the center of the carpet and showing its deserved features. 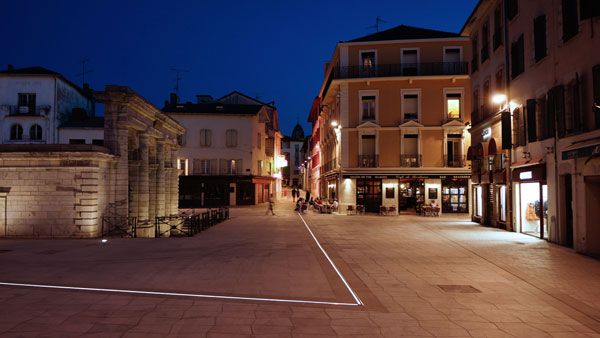 A Clever Lighting Design The lightning is another feature that makes a huge difference in the environment of the area. Instead of suggesting direct lighting in La Fontaine or even in the pedestrian area, OKRA adopted two indirect lighting solutions built into the pavement. 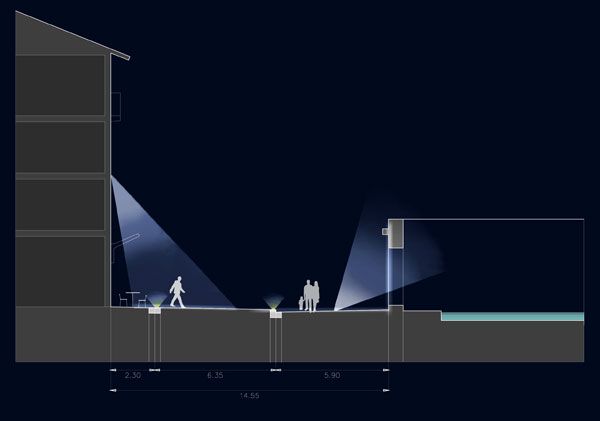 One of the spotlights on the fountain is an art piece, and the other lightning element is the continuous line that surrounds the shape of the fountain’s public space. It is important to observe that many of the buildings that surround La Fontaine are cafes, restaurants, and shops with their own lighting, acting as complementary light to the public spaces. Considering this fact, OKRA’s solution for lighting, without a doubt, benefited both the public space and the merchants. Related Articles: 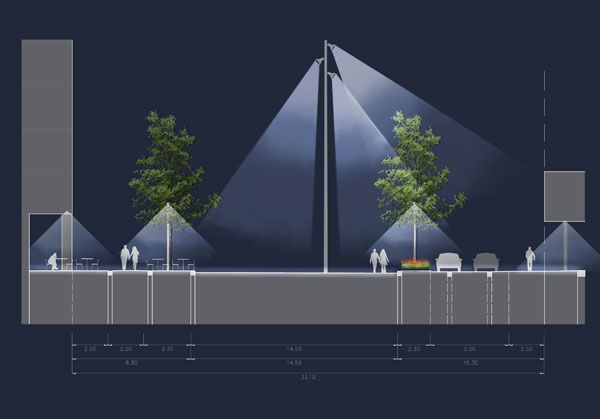 The Design is in the Details Another element that shows the entire integration of the project is the shape and position of each architectural constituent. Three shapes should be especially noted: the paving pattern, the material pattern of the bench, and the La Fontain Chaude plan shape. Certainly, these shapes were carefully thought out by OKRA to be extensions of one another, composing an intricate geometric play. Indeed, these characteristics accentuate the attention to detail in every element of the project, which is certainly a mark of a successful project. 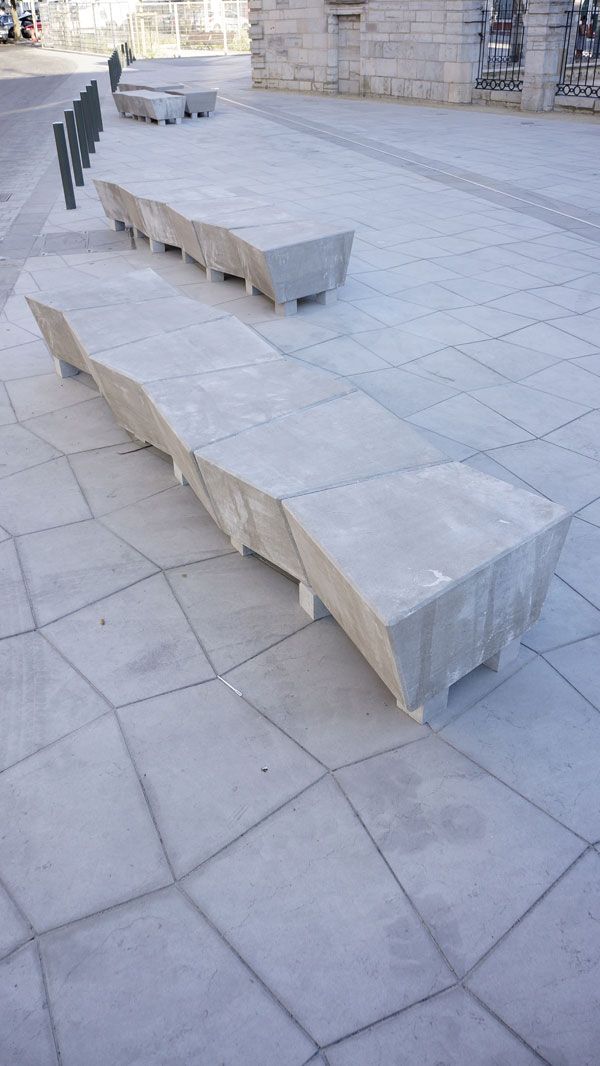 The Second Phase The second phase makes more use of vegetation. Possibly, this solution was bounded by the fact that the square would be used to organize events and festivities and, thus, needed more ample spaces. In addition, the water table might also have limited the use of trees in the surroundings. 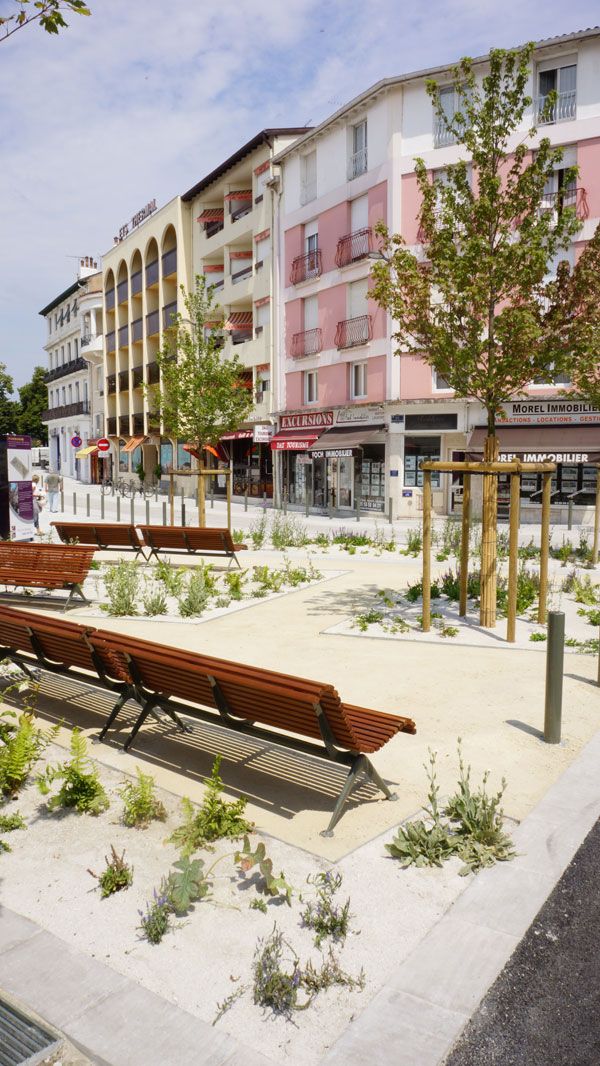 OKRA renewed this area by creating an open space at the back of the monument named “Bosquet de la Fontaine”. The “Bosquet de la Fontaine” will be an excellent area for people to contemplate the fountain along wooden benches and in the shade provided by nine trees. The La Fontaine Chaude square revitalization plan exemplifies how history and functionality can be integrated to the benefit of the citizens, highlighting the important role of the thermal waters to the patients and to the city while preserving its centuries-long tradition. With a simple and admirable solution, OKRA restored not only Dax’s downtown, but also one of its most important historical monuments. Recommended Reading: