Article by Rose Buchanan Maria Theresa Street, by Alleswirdgut, in Innsbruck, Austria. The traditional shopping street is a fantastic notion of bright shop windows, bustling pedestrians, and the buzzing activity of traffic. The reality, however, is often not so pleasant. There is nowhere to sit, one can barely look into a shop without being shoved by passersby, and the desire to quickly look into the shop across the road is met with treacherous traffic crossings. Maria Theresa Street in Innsbruck, Austria, was no exception to this, and while the beautiful buildings and tourist attractions such as the Golden Roof created a spectacular urban street, it was not user-friendly. In 2006, the city realized the need to revive the street, and launched a competition to design an attractive public “lounge”. The idea was to make a pedestrian zone in the northern portion of the street while accommodating the functional street requirements to the south. 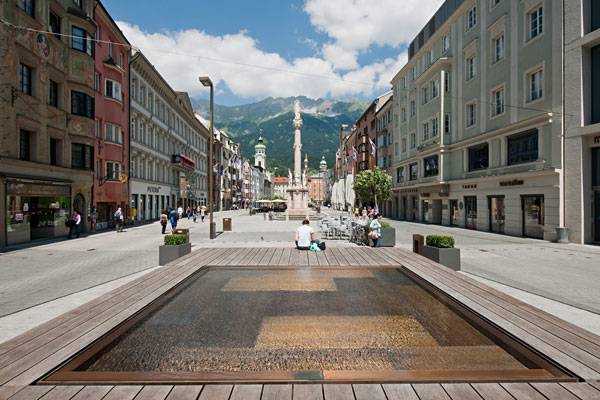 The competition was won by Alleswirdgut, which managed to combine the dual functionality of the street in a sensitive and complex manner. Five years of planning and construction followed, with the northern pedestrian area being completed in 2009 and the southern public transport area in 2011. The street was opened with a street party on Aug. 6, 2011, in a celebration of public space. Let’s have a look at how this street was successfully transformed:

Unifying the Space Through a Carpet of Paving

The goal of the project was to create an urban site with a rich atmosphere. The designers strove to transform the street into a public space that invites strolling along, wandering comfortably in and out of shops, and relaxing on street benches or in dining areas. Alleswirdgut aimed to maintain the identity of the traditional street against the dramatic backdrop of an Austrian mountain while creating a rich, new public space. The landscape architects achieved this by unifying the space by applying a carpet of four different types of Austrian granite, which runs from the famous Triumph Gate to the Old Town. 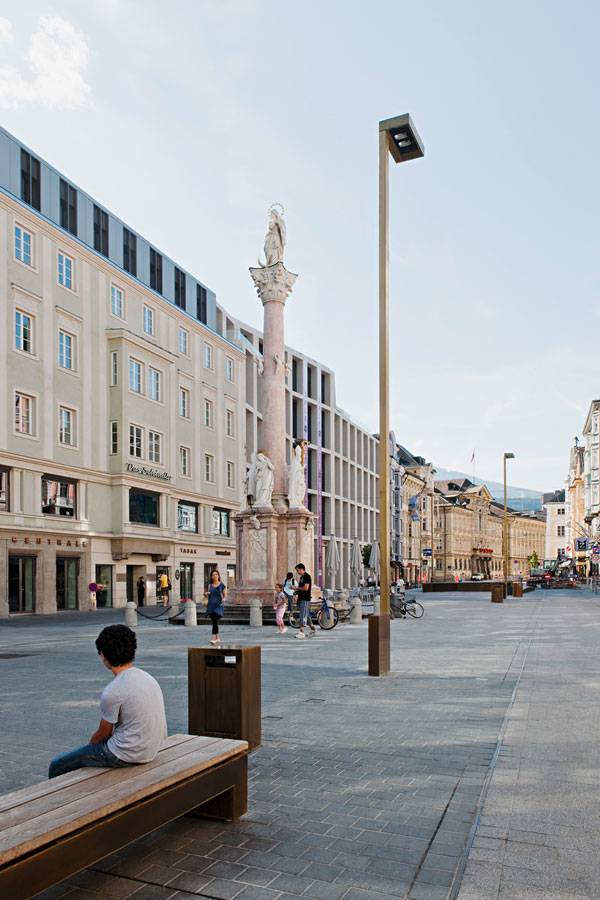 This surface treatment was combined with a network of brass-colored ground plates with street furniture growing out of them. The golden color of the brass makes reference to the Golden Roof, and the robust quality of the granite and brass allowed for the street to withstand the daily rush of its users.

This project relied on the simplicity of contrasts to highlight the tension between the urban site and the natural panoramic view. In this manner, the design created contrast between the past and future, as well as between the specific character of the space and a connection to the urban identity of Innsbruck. These contrasts allow for the experience of strolling along the generous pedestrian spaces to become a powerful sequence of facades and public activity. At night, the movement zones along the edges of the buildings are brightly lit, while the central spaces glow softly with low light, keeping the silhouette of the mountain backdrop in view. 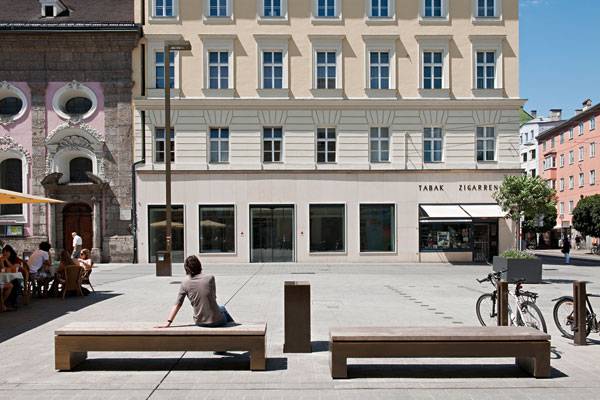 At night, the movement zones along the edges of the buildings are brightly lit, while the central spaces glow softly with low light, keeping the silhouette of the mountain backdrop in view.

Alleswirdgut created a central space in the street that defines a more intimate area for outside dining and relaxing. Three broad steps lead up to the space, accommodating changes in level while providing a stage-like area for events. Within this central space is a large water basin that serves as a place of interest halfway between the Golden Roof and the Triumph Arch. The beauty of this water feature lies in the purity of the construction – its rectangular, brass tray base with dark ash wood seating and a water level that is gently adjusted with waves. The water in the basin is continuously fed from the drinking fountain network, making the pool of water a continuously clear and sparkling feature within the complex urban surroundings. 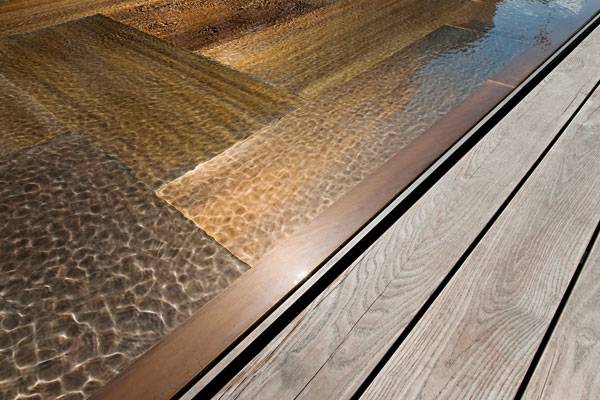 Street furniture including benches, lighting, and dust bins were carefully integrated into the design, emerging from brass inlays as pure elements of brass and timber. These elements respond to the linear nature of the paving, providing functional public space requirements while highlighting the traditional buildings through their aesthetic contrasts. Unlike the traditional approach of linear street planting, Alleswirdgut consciously did not implement any permanent planting, as the designers felt this would reduce the impact of the uniform space treatment. They therefore opted to plant Oleander trees in large plant containers, which correspond to the outdoor dining and tourist areas. 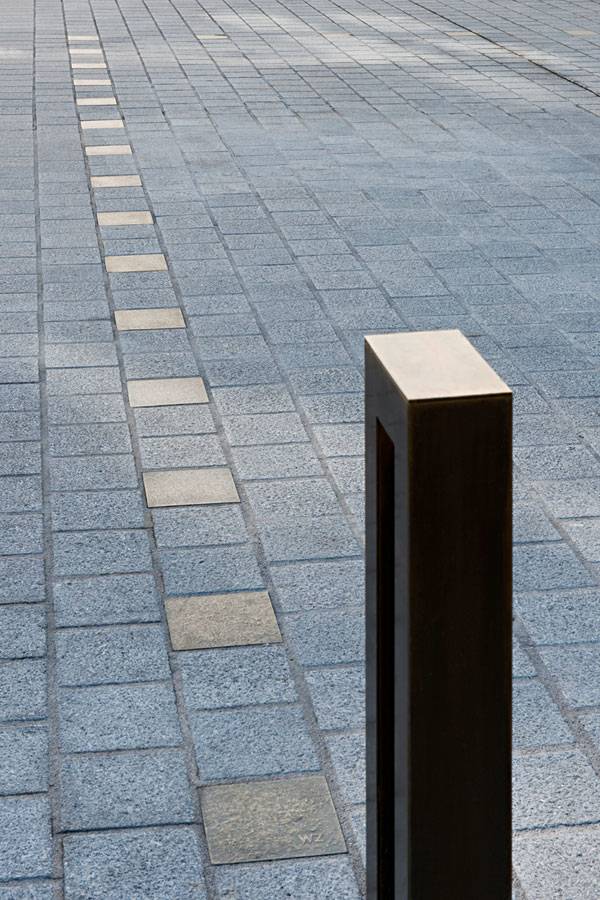 The power of the design lies in its ability to provide a new level of perspective while complementing the existing historical context. Alleswirdgut has managed to upgrade the space through the use of high-quality materials while at the same time creating a complex, multi-layered, yet homogenous urban space. The experience of walking down Maria Theresa Street has been transformed from a limited and uncomfortable walk into a sensual, experiential stroll. Now that’s a win for public space! What do you think of Maria Theresa Street? Let us know in the comments below? Go to comments 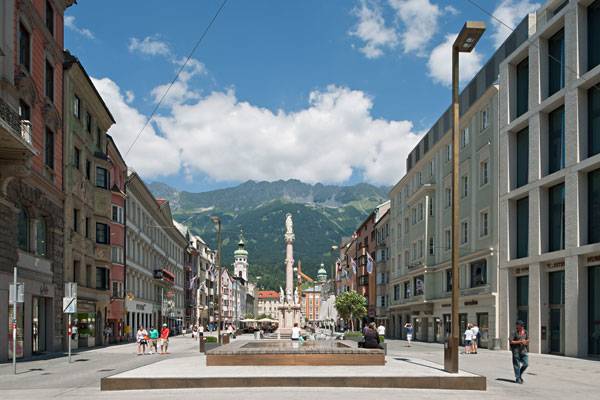