Do you ever read design books and wonder what they have to do with your reality? Yes, I’m addressing landscape architects on this one, as I am one of you who constantly questions this. It’s as if the objective of architectural discourse is to find everything fun, sacred, and beautiful about the world and turn it into a dialogue that only a few can understand while excluding the people who originally came up with the idea or thought. I suppose there are some who feel included in the established fabric of the city, while others do not. These people may occupy space between the cracks and have a perception of space and urban life quite contrary to the way it was intended. This book is for those who embrace the cracks and gaps and find their identity among them. What is this book about? Skateboarding, Space and the City is an architectural book that explores the urban realm through the subculture and activity of skateboarding. It is written with a voice and authenticity that is true to both architecture and skateboarding. It is obvious that the author is passionate about both. I will list the chapters now, because in many ways they sum up what you are getting as a narrative as well as factual information. After the introduction there is a chapter on the evolution of the skateboard and how that relates to the subculture and its application to urban space. The evolution of Devices from sidewalk surfing, to pools, to vert ramps, and eventually the entire city is covered in the chapters Found Space, Body Space, Constructed Space, and Urban Compositions. There is an interesting look at the Subculture associated with skateboarding. The book continues with the idea of the event in Performing the City and closes with a return to architecture through the idea of appropriation. Get it Here! 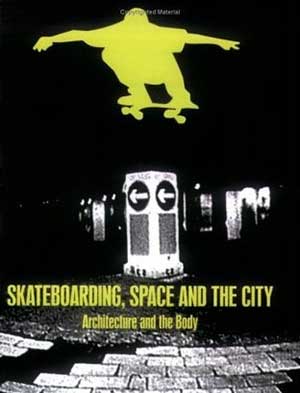 Skateboarding, Space and the City by Iain Borden

Borden has extensively researched the archive of skateboarding media to create this book, as this is where most of the cultural evidence is to be found. There is an incredible photograph of the author in the middle of a layback slide on four feet of vert, which reinforces his credibility and passion for the subject. As a result, there is a great amount of authenticity to the skater as well as the designer. Due to this format, the book is incredibly successful. It seeks to invite both the maker of the urban and the user of the urban into simultaneous dialogues describing both the reaction and the cause of skateboarding in relation to the body and the city. It allows both parties access to a discussion they are a part of but generally excluded from. Get it Here!

The designer is reminded throughout this book that the story of what he creates is only part of the eventual reality of that creation. Once built, there are multiple interpretations to any space beyond the intended concept, especially to those who act as part of this skateboarding subculture. Without getting into clichés, like urban space is the contested space, the reality is that it is. Maybe this is why it’s a cliché. A handrail leading up to a new museum is a helpful tool to one, but a challenge to the other, without any specific regard for the context. More importantly, the relevance and thought of the context is of little value if the individual feels excluded from the conversation and, in this way, they may prefer to have a dialogue with the handrail. It also gives designers clues to how and where they can program in this added event and the cultural condition from which that event arises. 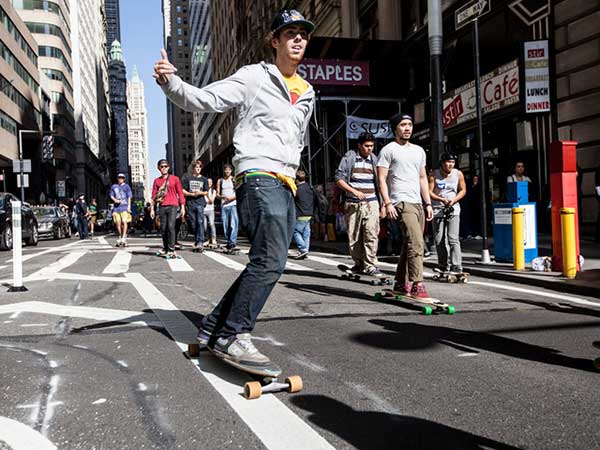 Skateboarders in the city

The skater, in turn, is informed about the evolution of his sport in relation to urban space in an informed way, which symbiotically analyzes the language and hype of the skateboarding media and vernacular with the analysis of a designer of urban space. I believe this is important, as many skaters are intelligent people who should have access to dialogue about their subculture and choice of activity from multiple framings and in different ways than what is used via typical skateboarding media. What Borden does not shy away from is that skateboarding and its evolution in urban space have been influenced by big business and savvy marketing, ultimately celebrating and exploiting the idea of disenfranchised youth. Borden is unexpectantly candid that skateboarding is generally an activity for younger males looking for primal bonding in a way that is quite similar to other sports, even if the aesthetics and game play are quite different. Get it Here!

My reaction from reading What I appreciate about the book is that it acknowledges subculture and goes beyond the confines of typical architectural discourse into a deeper conversation about the use of urban space in a way that is genuine and true to the subculture from which it is derived. It was tempting to draw out a plethora of incredible quotes that are not only are applicable to skateboarding, but to the ideas of the event, subculture, and the possibilities movement in urban space. 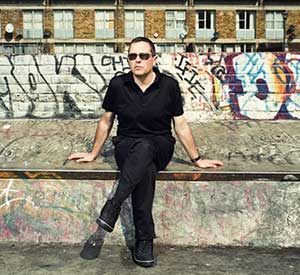 As a climber, I drew many parallels with my own activities, and I believe bikers, surfers, dancers, and buskers will find the same. There are many quotes within the text that will satisfy an architectural critic in the same way a well-used quote from Koolhaus will achieve (so students, if you’re looking for an edge the other kids don’t have, get this book). I thank Borden for taking architecture beyond the over-analytical, almost drool, and inconsequential sentiments that can be found in its writing. Where much design-based writing seems like it is using many words to say nothing, this book says something about the urban realm, the way we relate to it, and its manifestation through culture. Skateboarding, Space and the City: Architecture and the Body

About the Author: (taken from Amazon)
Iain is the Director of Architectural History and Theory and Reader in Architecture and Urban Culture at the Bartlett, at the University College London.
Publisher: Bloomsbury Academic
Type: Hardcover
Page length: 320 pages Book review by Stuart Beekmeyer Enjoy what you’ve read! Support us and pick up one of our awesome T-shirts and hoodies today, Click the link