A look at some of the world’s most outstanding riverbank projects. When it comes to building sustainable cities, discussion often centers on urban rivers and their surroundings. In many cities around the world, rivers have been channelized, transformed into receptacles for waste disposal, or just forgotten when they are no longer needed for industrial and commercial uses. As a consequence, these rivers have lost their innate ability to aid in flood control, seen their aquatic life destroyed, and gone unnoticed due to construction of barriers that blocked their access and hid them from residents’ eyes. But in other cities, once dead spaces along rivers are being brought back to life and transformed into recreational areas, meeting the demand for outdoor spaces from quickly growing populations. As in music, where the notes and the pauses have equal importance, an increase in constructed areas must harmonize with green space to guarantee liveable cities for the future.

Riverbanks can set the new pace for this composition. The following list offers some of the most inspiring river transformations that have improved the relationship between city residents and nature, inviting people to look at rivers not as obstacles, but as vital and connective urban components. 10. Berges de Seine, Paris, France, by Franklin Azzi Architecture The combination of historic bridges and monuments along the Seine River has made this place one of the top tourist attractions in the world. Some may think that the designation of the famous riverbanks as a UNESCO World Heritage Site means that the place cannot be changed. But the initiative of the local authority, known as Berges de Seine, is showing that historic riverbanks can be modernized to adapt to the current needs of a city. 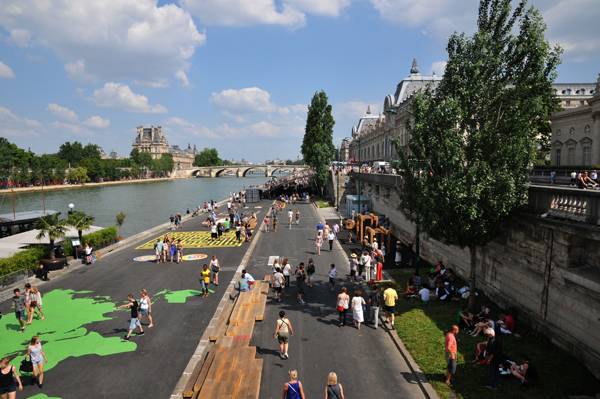 An open-air park along the Seine is filled with benches, bars, gardens, and playgrounds (some making use of recycled materials such as ship containers), making the area along the Seine more attractive for tourists and recovering its importance as a meeting point for city residents. The riverbank regeneration project is also seriously engaged in motivating physical activities, such as group walks; providing more adequate seating areas to watch performances; and reorganizing the public space so that it can be better shared by pedestrians, cyclists, and drivers. 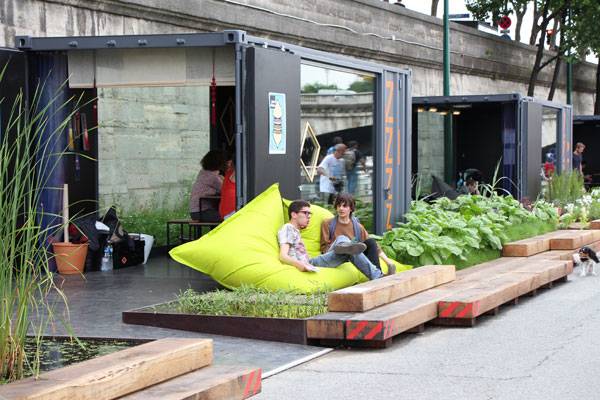 9. Melbourne Southbank Promenade, Australia, by Denton Corker Marshall Surrounded by a variety of arts and cultural buildings and featuring cafes, shops, and restaurants, the Southbank Promenade stretches along the south side of the Yarra River as one of the most important cultural and social hubs in Australia. The design was completed in the early 1990s when the former dock site was the subject of an urban renewal. 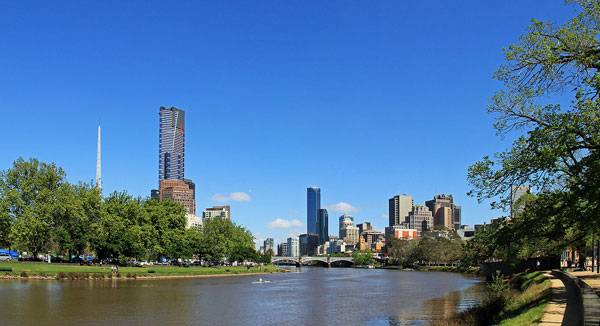 The promenade paved the way for important developments that transformed the area into a successful business center. It is still fundamental to attracting investments and enticing people with a variety of leisure options and splendid views of the river and the city. 8. Mill River Park, City of Stamford, Connecticut, USA, designed by The Olin Studio in collaboration with the Mill River Collaborative Although there are several stages to be completed in the upcoming years, some important parts of the total 28-acre area are already finished, and they are significantly improving the residents’ quality of life by enabling people to experience nature without leaving the urban environment. 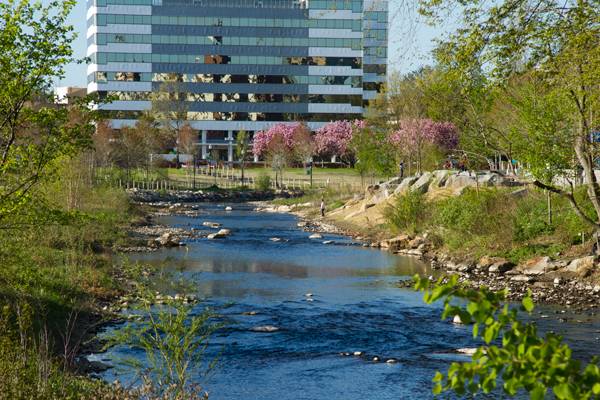 The project encompasses the creation of world-class recreational facilities, attractive green areas, and walkways. But its main feature is the restoration of the urban section of the Mill River and its banks. By applying approaches of sustainable design and bio-engineering techniques, the design and technical teams worked together to remove concrete walls and de-pollute the water to allow the river to flow freely, storm water to be absorbed, and wildlife to return to the area. The riverbanks have become the focal point of this new space that has transformed a decaying downtown area into a healthy central park. 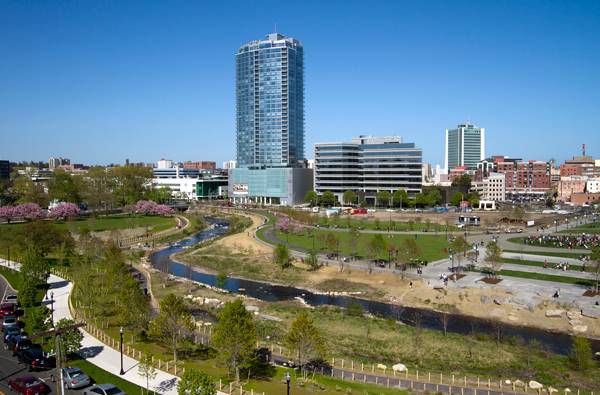 Read more in our review of the Mill River Park. 7. Louise McKinney Riverfront Park, Edmonton, Alberta, Canada, designed by Dialog As Edmonton is one of the fastest-growing cities in Canada, urban revitalization projects such as the Louise McKinney Riverfront Park, which created a 15-hectare green space in an area formerly occupied by a landfill, are fundamental to keep the balance between increasing constructions and nature. 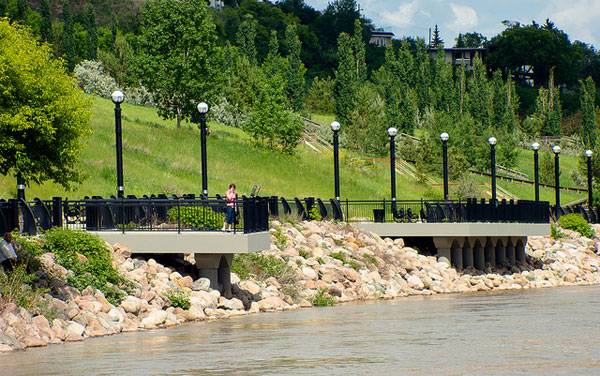 The preference for a verdant open space over more complex solutions has provided an unobstructed river view for developments adjacent to downtown and a lawn for recreation and special events. The park is the gateway to trails, motivating people to explore the outdoors beyond the city boundaries and allowing newcomers and longtime citizens to celebrate the riverfront during special events. 6. Kallang River Bishan Park, Singapore, designed by Atelier Dreiseitl This project is part of Singapore’s program of water management, which aims not only to guarantee an efficient drainage and supply system, but also to transform areas located along the water into recreational and social spaces. Completed in 2012, it occupies a total area of 62 hectares redesigned around a restored sinuous river to offer green spaces, restaurants, playgrounds, and a look-out built using recycled concrete from an old channel. WATCH: Have you met the Friends of Kallang River @ Bishan Park? Because the design is based on a floodplain concept, during rainy season the park works as a channel and, when the water level is low, the soft riverbanks can be used for recreation, allowing people to get close to the water. Another important achievement for the urban environment was the increase of biodiversity brought by the transformation of the concrete channel into a re-naturalized river that now flows freely, surrounded by vibrant spaces. WATCH: Kallang River at Bishan Park 5. The Red Ribbon Park, Tanghe River, Qinhuangdao City, Hebei Province, China, by Turenscape The 500-meter-long red ribbon was the surprising solution found by the designers to preserve natural habitats and create recreational and educational areas along the river. Made of fiber steel, the ribbon stretches along the riverbank, working as a winding seating component and integrating the walk pathways to the diverse spaces in the park. The contrast of the “red ribbon” with the green areas during the day becomes even more interesting at night, due to red glowing light installed inside. 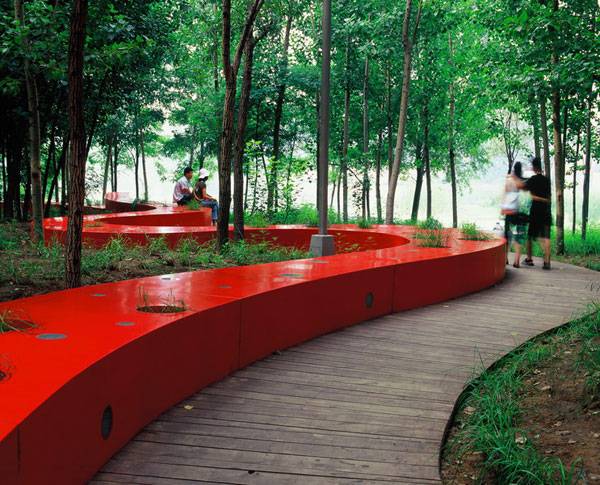 Since its completion in 2008, the 20-hectare green area that replaced the formerly inaccessible riverbanks is being massively used by the growing urban population without compromising the goals of preservation of the environment. The ribbon has been working as a key component of this success because it is the “spine” that provides structure to the space and makes reference to ancestral Chinese myths of energy flow, allowing people to identify with the environment through their cultural heritage. 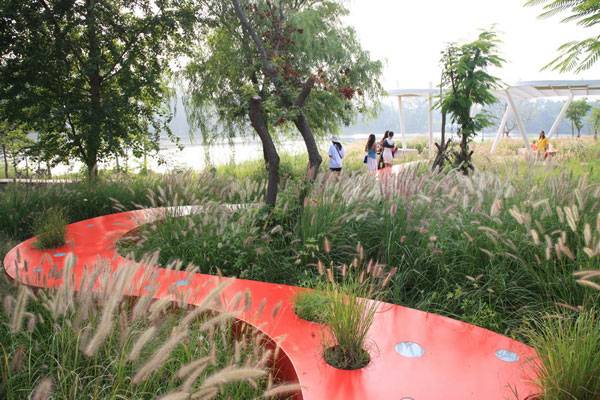 4. Cheonggyecheon River Project, Seoul, South Korea, by SeoAhn Total Landscape Opened to the public in September 2005, this project embellished downtown Seoul with its hanging garden-like banks framing a cascading stream. It became a reference for urban renewal by the designers’ bold choice of demolishing an elevated highway to allow the restoration of the stream and the planting on its banks. WATCH: Cheonggyecheon River in South Korea – Best restored river in the world, possibly The project was started by Mayor Lee Myung-bak in 2003, and, although it faced opposition, its implementation proved that its benefits outweighed its costs. The landscape that replaced the typical urban concrete space and motorized lanes now attracts tourists and investors, promotes sustainable transportation, preserves cultural heritage, and provides flood control. It turned the city into a sensitive environment, while promoting its social and economic development. 3. The Rhone River Banks, Lyon, France, by In Situ Architectes Paysagistes The population of Lyon was given a 10-hectare linear space for recreation when this winning project for the competition for the improvement of the Rhone River Banks was completed in 2007. Formerly used as a car park area, the east side of the river is now a dynamic space featuring walkways and bicycle lanes that facilitate exercise and promote sustainable transportation. 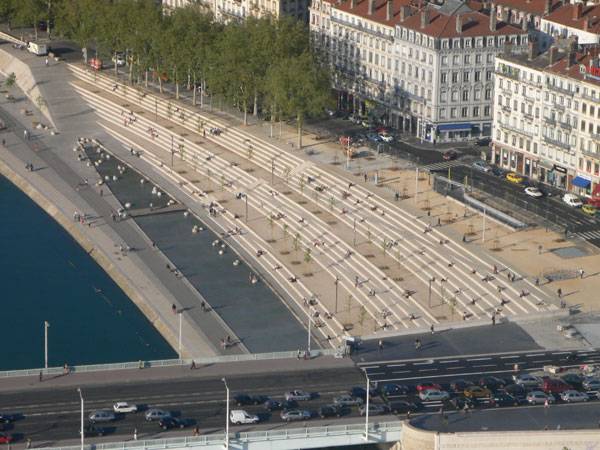 The main characteristics of this impressive space are the giant amphitheater-like stair and seating components that were built taking advantage of the sloped riverbanks, which accommodate the audience for performances, work as social gatherings spots, and are used as rooms for relaxation. The water fountains and lawns are alternatives for re-energizing while enjoying the scenic views of the river. 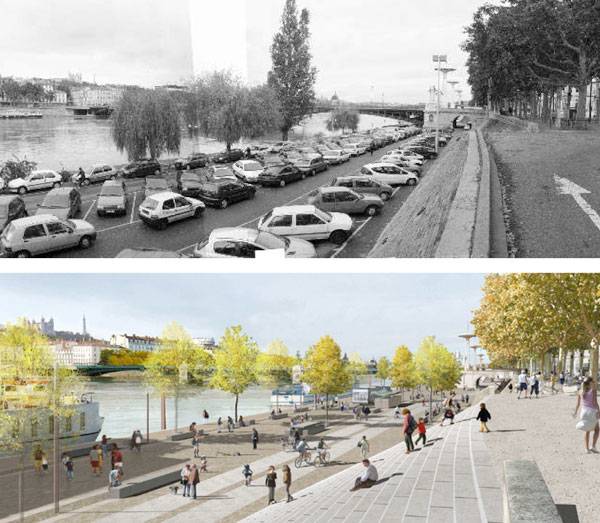 Before and after – The Rhone River Bank. Credit: IN SITU Architectes Paysagistes.

Read more in our review of the Rhone River Bank. 2. Zhongshan Shipyard Park, Guangdong, China, by Turenscape This park was built in an abandoned shipyard, with the main goals of preserving the environment and historic heritage. With the creation of solutions such as an island to preserve trees and regulation of the water level in the Qjiang River in the early 2000s, the landscape architects showed leadership in environmental practices. The principles of reutilization and recycling of natural and man-made materials were also followed when creating new forms that resulted in an artistic reconstruction of the brownfield. 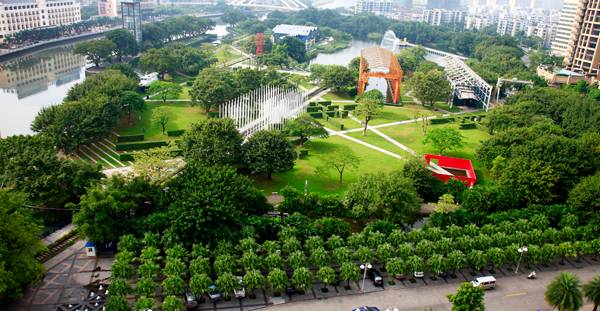 This industrial site represents 50 years of Socialist industrial history and was a witness to China’s Cultural Revolution. Credit: Turenscape

Read more in our review of the Zhongshan Shipyard Park. 1. Rio Madrid, Spain, by West 8 and MRIO Arquitectos The area along the River Manzanares in the center of Madrid was completely changed after the completion of this project in 2011. The project was designed to reintegrate the river with the city. This huge transformation included the construction of tunnels to accommodate car traffic, leaving the ground level free for the construction of gardens, and the creation of pedestrians ways that preserve the city’s heritage and link the river to the other parts of Madrid.

The Salon de Pinos is the key space to reach these goals because, as its name suggests, it was designed to invite visitors to a ballroom-like space where the pace is set by the pine trees planted at different angles to configure a unique urban forest and soften the riverbanks’ hardscape, built mainly in concrete. It’s one of the most original urban designs recently implemented, not only because it creates a layer of nature and leisure over a motor tunnel, but also by having enhanced the river’s landscape, reminding the city about the importance of its natural elements.

Read more in our review of Rio Madrid. These 10 projects are some of the best examples of reconnecting riverbanks with post-industrial cities, since they not only apply sustainable methods of design, but also show that the dream of bringing the rivers back as core elements of the urban fabric is an achievable goal. The designers also met users’ expectations by recreating the landscape in a way that citizens can rediscover and enjoy the places where their cities were born. Recommended Reading: