Project Banyoles Old Town Remodeling, by Miàs Architects, in Banyoles, Spain. Landscape architecture often has the power to transform a space, bringing out the best features and demonstrating that it is never too late for urban remodeling. The remodeling of Banyoles old town stands is clear proof of how far landscape architecture has advanced and how talented are the people who work in this field. The project was commissioned by the Banyoles City Council and it was undertaken by the talented team at Miàs Architects. Completed in 2011, the project covered an area of 18.000 m2 and it had a budget of approximately €4 million. The project was successful (to say the least), receiving numerous awards and recognitions, including the Premis D’Arquitectura Comarques de Girona in 2007. Transformation as a process and a journey of discovery The decision to remodel Banyoles old town came out of necessity but also because the respective space had a lot of potential for aesthetic improvement. The powerful sensation of deterioration that encompassed the area, doubled by the entangled urban system that was present stimulated the dedicated architects to come up with a project that was both functional and aesthetically pleasing. It was the perfect moment to update the utility lines and take them underground, where they belong. Plus, there were too many cars parked in the Central Square, reducing the functionality of that urban space. A Pedestrianized Dominant Space In organizing the steps for the project, it was decided that almost all the available space is going to be pedestrianized and that the old sidewalks are going to be removed. Another important change would be related to the irrigation canals, which had become part of the sewer system and reducing the interest of being in that respective area. Once again, it was the right time to make water a central element of a refreshed water space, blending it with stone elements for spectacular results. New with the feeling of old This project would not have been possible without taking into account that this town has a lot of old buildings and architectural elements that have been dating for some time. The architecture of the area has guided the talented team of landscape architects in choosing elements that correspond, with water and stone being the main actors on the remodeling stage. Maintaining the Medieval Feel Travertine stone was used for a lot of the open spaces and the changes made in the small squares, maintaining the same medieval town atmosphere that locals and tourists have gotten accustomed to. The interesting thing is that the travertine stone had always existed in the subsoil of the city, being used not only for the actual squares but also for the raising of those beautiful, medieval buildings. Related Articles: Water, the driving force of this project The old town had beautiful water canals, but they had become part of the sewer system, with the water’s quality being undoubtedly affected. The project successfully managed to restore the old water canals, these appearing intermittently between the recently pedestrianized spaces. The bigger sections were specially arranged so that children could enjoy playing with water. The flow of water is felt everywhere, but it is not overwhelming. New pavement gets its inspiration from the art that is water The pedestrianized areas were re-defined by the complete replacement of the pavement. The chosen pavement borrows from the characteristics of water, with the slopes reminding more of a cascade and the flat areas resembling a peaceful, still ocean. Historical center, a museum of past and present The urban planning for this project was a definite success, with the sequence of squares adding value to the overall results. Each square was named after the historical buildings that were present there, such as the Central Square, the Studies Square or the Theater Square. 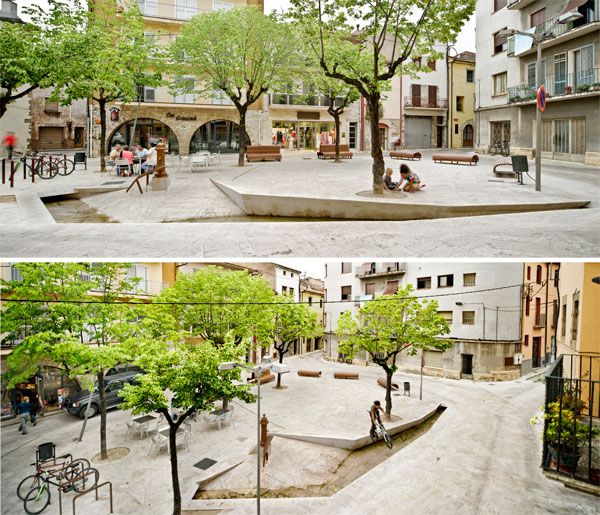 Architecture Dating From The 12th Century The remodeled squares, the water canals and the elegant travertine stones are all elements that have contributed to the success of this project. Both residents and tourists who come to this town have the opportunity to enjoy the remodeled historical center of Banyoles, with the architecture dating from the 12th Century. 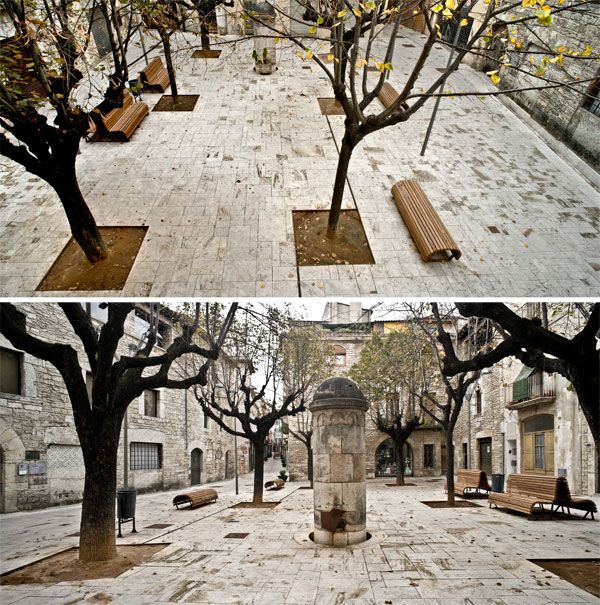 In looking at how the project turned out in the end, we cannot help but be thankful to those whose great ideas are taken from the paper and brought to reality. It takes a lot of talent and effort to take an urban space and transform it into something amazing, without having a negative impact on the medieval atmosphere. – Bringing contemporary design to a historical setting is not without its challenges and is a sensitivity operation. Do feel the designers respected the history of the site, what more could they have done?