Vinge Station, by Henning Larsen Architects, Vinge, Denmark A visit to the future Vinge, Denmark, train station will likely evoke the imagination of Star Wars rather than the tradition of Hogwarts. The design by Henning Larsen Architects is futuristic, visionary, and beautiful. The Danish studio won an architectural competition to design the S-train station that will form the chief transportation hub in the center of Vinge, a 350-hectare city to be built in the Frederikssund region north of Copenhagen. The S-train is a network of regional trains in the Copenhagen area. A team from Henning Larsen Architects, in cooperation with Tredje Natur, MOE A/S and the Irish Railway Procurement Agency, designed the proposal, which a competition jury called both visionary and beautiful.  While the station’s primary purpose is to connect Vinge to the regional public transit system, the undulating, circular hub is also designed to prevent the railway from dividing the town in two. 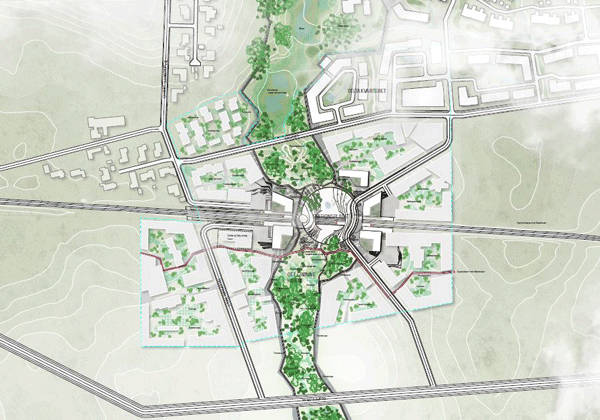 The Design of this Stunning Train Station Five international multi-disciplinary teams participated in the invitation-only architectural competition. Henning Larsen Architects had already created the master plan for the town, which will be the largest urban development project in Denmark to date and home to more than 20,000 inhabitants. The train station will connect the new city with neighboring regional areas, as well as Copenhagen, and is expected to be built by 2017 — ahead of the city’s completion in 2033. The train terminal will be sunken below ground level and accessed by an elliptical opening. The white, curved roof structure will dip to meet the platform level and rise to cantilever over the tracks, forming a bridge on either side of the opening. The structure will be terraced, to provide a recreational area leading to nearby parkland, with the train tracks threading out into channels between buildings on either side of the station concourse. 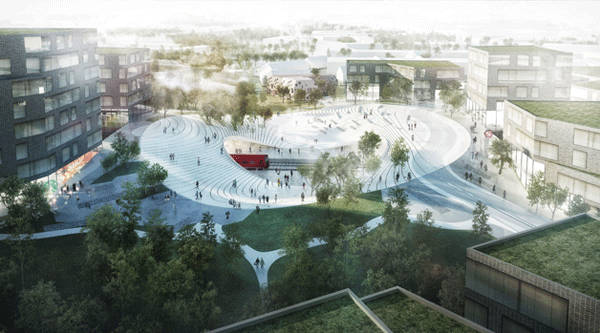 Buildings of varying heights situated along the tracks are intended to integrate the station into the larger city infrastructure. The station will be situated at one end of a large strip of parkland that will run through the center of Vinge, forming a connection between the city and its rural setting. Relation Across the Rails One of the major challenges of the assignment was to design a station that creates connections in the city instead of dividing Vinge into two parts. The architectural team’s solution is a landscape feature that extends across the rails. In the middle of the landscape is a circular urban space that organically follows the surrounding landscape. The site extends over the rails and connects the city across the train tracks. 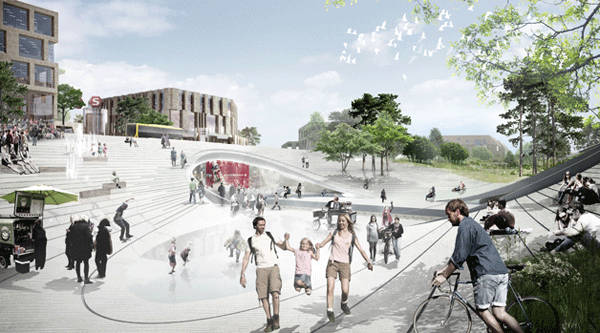 “From the high-density environment of the city center, the architecture gradually transitions to lower, more open building typologies, scaling down the building stock towards the surrounding open landscape. The primary design goal has been to bring the surrounding scenery into the new city. Green areas within the urban context create breathing spaces, add a recreational dimension to the city — such as playing fields, urban parks, and wetlands — and ensure nature’s enduring presence in the city,” write Henning Larsen Architects. Related article:

Formulation of an Integrated Town Space Henning Larsen Architects has also created the overall master plan for the town of Vinge. “We are very happy to be part of the first step of the development of Vinge by designing the train station and the urban space surrounding it. It is a symbolically strong beginning of a town development. Our idea is to create an integrated town space that connects the movements of the town and the landscape. In Vinge, the natural landscape becomes part of the town and you will be able to live in the countryside within the town,” explains Niels Edeltoft, architect and project manager at Henning Larsen Architects. 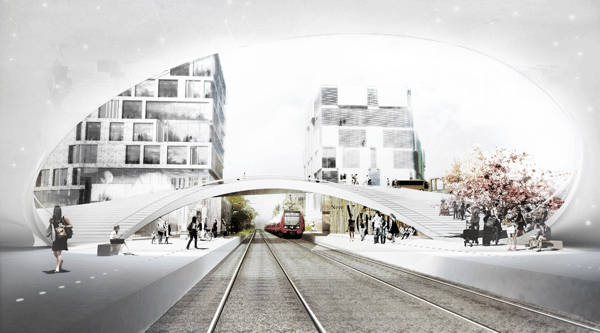 “It shows both courage and vision that our proposal to the central Vinge wins. We have in our studio always advocated that the city and the nature should be mixed, but we’ve never met the ambition as a visionary in terms of a builder, as we have in Vinge. Therefore, it is quite unique for us to win the competition, and we look forward (to) developing the proposal, both urban and natural qualities in the future, ” said Flemming Rafn Thomsen, founder and partner of landscape architecture studio Tredje Natur. See all the images in large via Roojoom:

Henning Larsen Architects is internationally recognized for its beautiful architectural works, including concert hall Harpa in Iceland, which won the prestigious Mies van der Rohe Award last year. The studio is also working on several projects in sustainable urban development. Henning Larsen Architects was founded by Henning Larsen in 1959, and over the years has designed many projects in Denmark and elsewhere in the world. The Vinge train station will be a hub for transportation and urban life once the city is fully developed, and the ultra modern look should fit in nicely within this city of the future. Recommended reading: