No signals, no traffic lights, no pedestrian crossings, no sidewalks, and no curbs. At first glance, that might seem like a chaotic road. But what if shared spaces are making streets safer for pedestrians, with fewer accidents and a lower speed limit?  For most of us, when we are walking in the city, the most secure place to put down our foot is on the sidewalk. However, the latest trend in designing human-scale streets is called “shared spaces”. This new kind of thinking is not anti-car, but it is a philosophy in which pedestrians are the ones who get first priority. And vehicles? Well, they act just like guests. So, without any clear right-of-way among all types of traffic users, everyone is forced to focus and to be cautious by making eye contact with pedestrians, cyclists, and other drivers. [contextly_sidebar id=”DRM9TsTXUqD7k2njtzlW4nA0lq5rxdG0″] There were concerns, of course, when shared spaces were first introduced. But after many years of experience, many countries are willing to add them to their landscape dictionary, but with different appellations. For instance, in the Netherlands, shared spaces are called Woonerfs. In the United Kingdom, they are called Home Zones. In Portland, they are called Festival Streets and in the United States, they are called complete streets. Yet, they all have the same motto: “Rather safety with uncertainty than accidents with clarity.” — Hans Monderman, a pioneer of the shared space concept in the Netherlands. We took a closer look at five places around the world that have successfully implemented shared spaces. 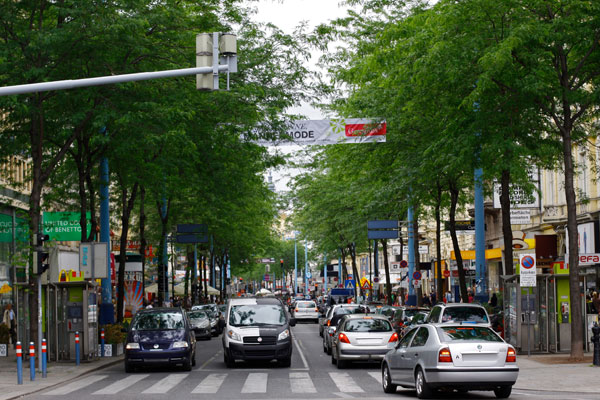 When the road is all filled up, it’s time to get creative with a new method of public realm. This was the case with one of Vienna’s thoroughfares, the Mariahilferstrasse, a shopping street that had turned into a crucial traffic artery before being redesigned by the Dutch office of Bureau B+B and becoming Europe’s longest shared space. 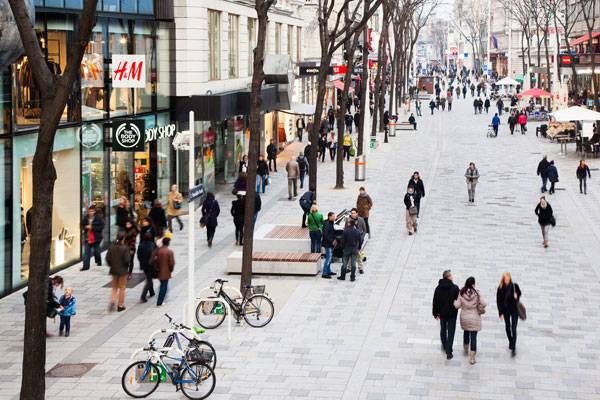 At 1.8 kilometers long, the street has been split into three zones. A pedestrian zone was constructed in the heart of the street (the center) and the two outer zones have been planned with the approach of shared space by removing all traffic signs, using a single level surface of sidewalk pavement, and installing street furniture. Surprisingly, this shared space is now witnessing a significant reduction in traffic along with an improvement in pedestrian safety. Adding to that, noise and pollution are no longer an issue in this street. 2. Exhibition road in London Project: Exhibition Road Client: The Royal Borough of Kensington & Chelsea, Transport for London & Westminster County Council Design: Dixon Jones Start of work: 2009 Total cost: £2.3M Size: 26,000 m2 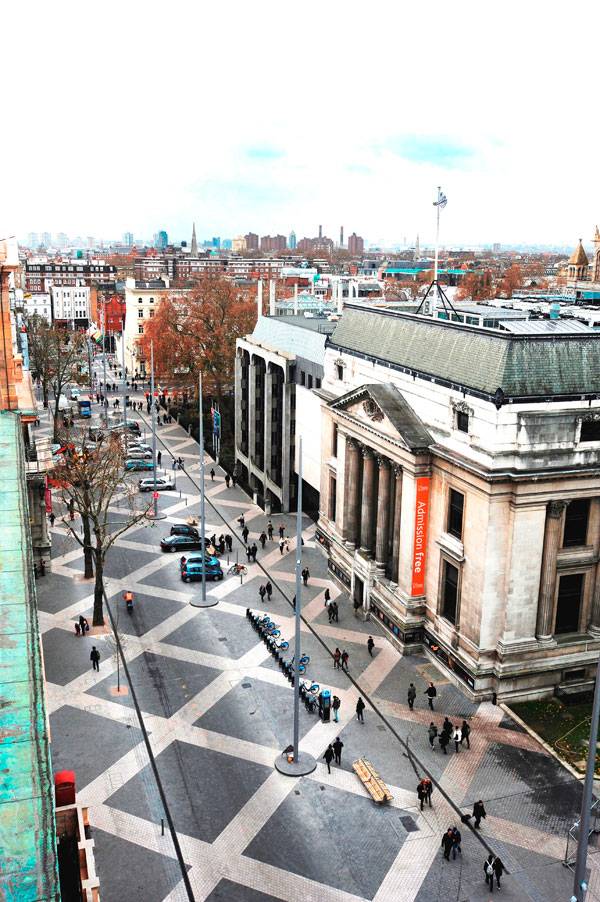 Exhibition Road was a busy London boulevard in South Kensington, providing access to cultural and educational institutions. With more than 11 million visitors a year, the street was frequently choked with lines of parked vehicles. The solution? Dixon Jones transformed the road into a shared space by repaving the street with a pattern that “disturbs linear movement across the street and emphasizes the diagonal routes pedestrians follow as they cross between the museums on either side,” Dixon Jones said. This is a remarkable example of a simple motif of stamped stone that has succeeded in uniting the road as one carpet and accentuating the visual perspective of the road. 3. New Road in Brighton Project: New Road, Brighton, UK Client: Brighton & Hove City Council Design: Gehl Architects Completed: July 2007 Cost: £1.75m 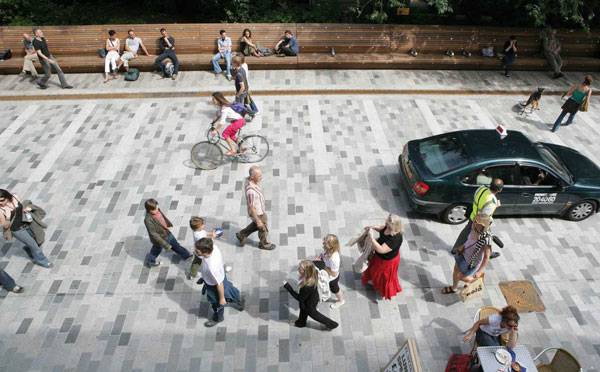 New Road was built in 2007, and since that moment, this road had seen an undeniable reduction in traffic volumes and speeds. It is considered as one of the very first shared spaces in the United Kingdom. With various users circulating, the design of the road was essential in determining the direction of movement. So every little detail counted: color, texture, and slabs. Indeed, Gehl Architects chose a granite paving with different shades of gray. Street furniture is all in a flamed surface and, to top it all, an unusual long timber bench was installed. This street has become the fourth most popular place for people to spend time in the city, just behind the beach. 4. Bell Street Park in Seattle Project: Bell Street Park Client: Seattle Parks and Recreation Design: SvR + Hewitt Date: 2009- 2014 Cost: $2.5 million 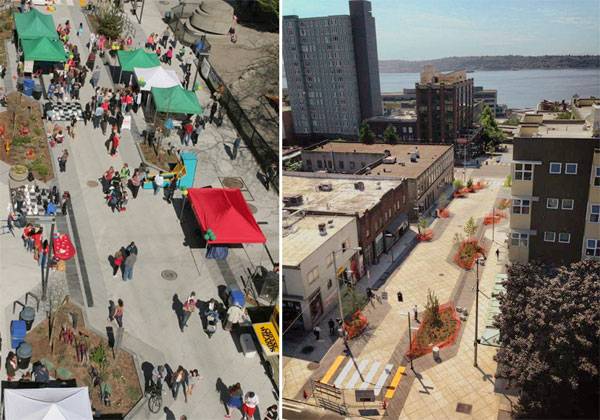 SvR and Hewitt designed Bell Street Park as a shared space, connecting four blocks of business, residential, and leisure space. With an advantage of natural landscaping and a direct view to the waterfront, this shared space has encouraged pedestrians to feel more comfortable in the street and move in it the way they like. Motorists can drop off passengers, and cyclists can ride, too, all in a common space. Furthermore, the street becomes a public plaza for community events such as music and dancing, or simply a playground. 5. O’Connell Street in Auckland Project: O’Connell Street Client: Auckland Council and Auckland Transport Cost: $2.25 million 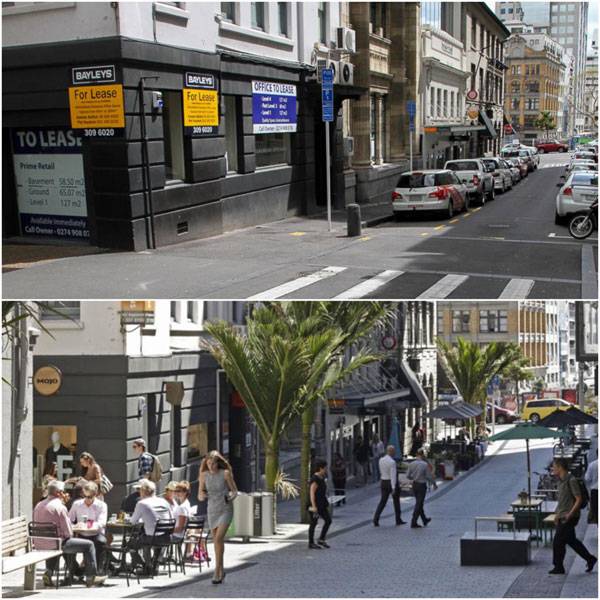 Due to a public consultation that took place in 2012, O’Connell Street has been transformed into a shared space. What makes this shared space’s beauty is the designed approach of concrete slabs and areas that were especially made for outdoor dining, events, and walking while allowing access for vehicles, all in a same leveling of the granite surface. To remind people of the historical context of the place, stone seats were installed and carved with information about the street. And for the final perfect touch, some locally grown Nikau palm trees were planted to reinforce the sustainable side of the project. – Obviously, this new vision of a socially and environmentally sustainable public realm is not without its critics, as the “make eye contact” rule doesn’t work for people with disabilities, especially the blind ones who find streets without curbs very difficult to cross and feel more comfortable in traditional streets with pavements and curbs than in shared spaces. That is why designers have to take the needs of disabled people into account and acclimatize comfort zones for them. Now that you have a complete vision about shared spaces, would you be encouraging this kind of public realm?