One of the world’s leading sculpture parks lies just over 30 miles (50 km) north of Auckland, New Zealand; the passion of art collector Alan Gibbs, Gibbs Farm combines a spectacular setting on New Zealand’s Kaipara Harbour with monumental site-specific works that challenge both the artists who created them and the viewers who experience them.

Over two dozen artists to date, including Anish Kapoor, Maya Lin, Richard Serra, Andy Goldsworthy, Daniel Buren and Neil Dawson, were commissioned by Gibbs over the past 21 years to design, engineer and place their works on site, often working on a scale they’d never before attempted.

According to an essay posted on Gibbs Farm’s website, “a striking characteristic of the whole collection is the tangibility of the way the site itself – the flow of the land, the dominance of the wide flat harbour and the varied assertiveness of the elements – has imposed itself on the artists who have made work for the farm, and subsequently shapes every visitor’s experience of each artwork.” The lands slope down in waves towards Kaipara Harbour (the largest harbor in the Southern Hemisphere), which is shallow to the point that several miles of mudflats are exposed with the ebb of the tides.

These immense shifting landscapes of land, water and light sometimes hide the true scale of the artworks, especially when viewing the sculptures from a distance. But according to the website, by “walking the landscape and coming into close quarters with each artwork, one after the other, their own scale and particular character unfolds, until one at a time, each artwork fills your viewing horizon and imagination.”

One piece that has garnered a good deal of attention by the press is Neil Dawson’s “Horizons”, commissioned in 1994 as one of the earliest pieces at Gibbs Farm. At 118 feet long and four stories high, the metal and steel sculpture has been compared by Architect Magazine to a “Roy Lichtenstein drawing deposited on a hill”, evoking (according to Gibbs Farm’s website) a “giant piece of corrugated iron that might have blown in from a collapsed water tank on some distant farm, only to rest precariously until the next gale lifts it into the air again.” Its ethereal two-dimensional appearance belies its enormous scale and mass, making it a true contradiction that captures the imagination and challenges viewer perception. 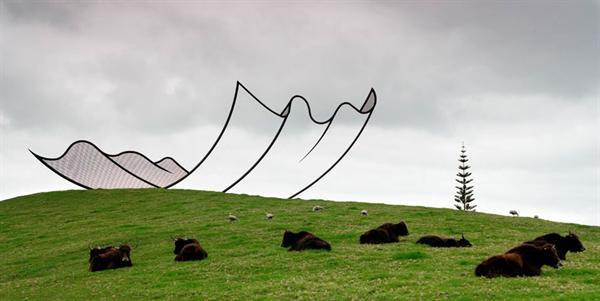 For those of you lucky enough to find yourselves in northern New Zealand, Gibbs Farm is open to the public by appointment only; click here for available dates, times and terms.

“Seeing the Landscape” by Rob Garrett reveals the give and take between Adam Gibbs and the artists whose works he commissioned, reveals the characteristics of the landscape and details many of the works in the park.