There was an air of anticipation around Dublin this past weekend: Ireland’s largest garden show, Bloom 2013, had arrived. It was the seventh annual event hosted by one of Europe’s largest urban parks, the Phoenix Park.

It was opened this year by none other than the president of Ireland — and park resident — Michael D. Higgins.

Bloom was packed with fun for all, with gardening, food, and family enthusiasts flocking to see more than 28 show gardens and to watch more than 25 cookery demonstrations from top chefs from Ireland and Europe. Sneak Peek The Landscape Architects Network had an exclusive peek around Bloom 2013. We will walk you through the best of the show gardens to see how the competition’s gardens have changed over time. And designer and vice president of the Irish Landscape Institute Tim Austin will explain how he gained inspiration for his “Giardino della Mostra” show garden. 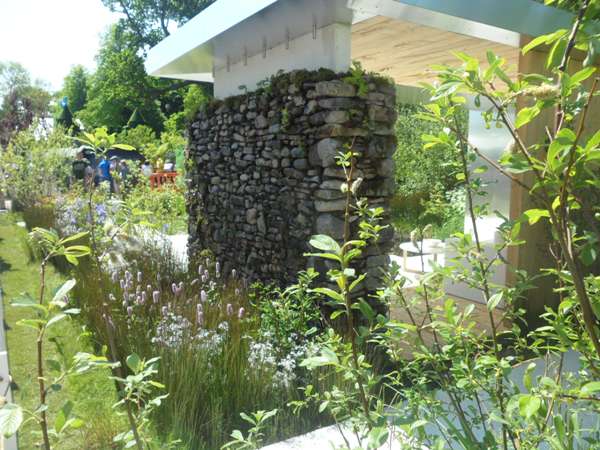 Show Gardens Visitors were instantly swept away to another world when they set sight on the show gardens, which burst with imagination and new ideas, ranging in theme from Alice in Wonderland to UFO-invading plant species. The size of the gardens varied from 35 square meters to 200 square meters. They were broken into four categories — large, medium, small, and conceptual. 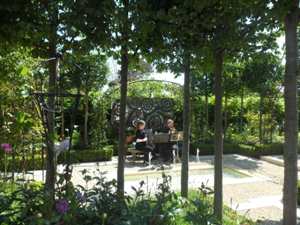 The “Waterford Harvest — Venture Into The Wild” was an awe-inspiring classic show garden by designer Gerard Mullen.   The Best in Category large garden, it was a contemporary outdoor living space oozing with the character of rural Ireland. A real must see! Native plants tied the bold structure into the landscape and inspired onlookers about how native planting can be just as flamboyant as exotic varieties. My personal favourite was Tim Austin’s “Giardino della Mostra”, a show garden that set out to inspire visitors of all ages to get creative at home on their own gardens. It was a formal garden with a strong sense of scale and proportion, with a well-considered planting palette composition. It’s simple lines and textures really appealed to me, taking me on a journey through a harmonious space that reminded me of a Mughal or religious garden. Its central path was the garden’s spine, with pruned planting rippling out from it. A small pool of water sat at its heart and a cascading water feature added drama toward the end of the garden. Classical music players set the mood for the show-stopping crowd-pleaser. Floral Marquee Under the mundane white marquee, an assembly of creativity, imagination, and celebration was contained. The exhibitors astutely arranged stands that evoked an inner feeling of opening the doors to a forbidden candy store, with its kaleidoscope of colors and scents. 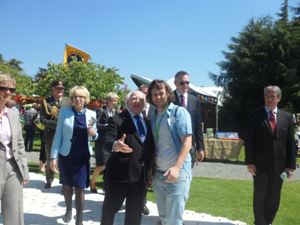 LAN writer Fergus McCarthy with Michael D Higgins, the President of Ireland, who opened the festival.

One of the most poignant and memorable stands was the artfully created “The Gathering” floral display, a stand that brought together a number of Irish memorabilia for the “1,000 gardeners” brought back to Ireland in a Bloom competition. The stand, I felt, evoked a sense of Ireland, verging on cliche, which flooded my memory banks of “the good times”. Conclusion For me, Bloom 2013 was a fantastic day out for all the family and a canvas for some of Ireland’s finest talent to be displayed to the world. The festival did what it does best; it is humble competition that doesn’t try to compete with larger, more expensive flower shows across Europe. The festival is comfortable in its own skin, linking produce and cooking, which sometimes can be forgotten in the larger flower shows. 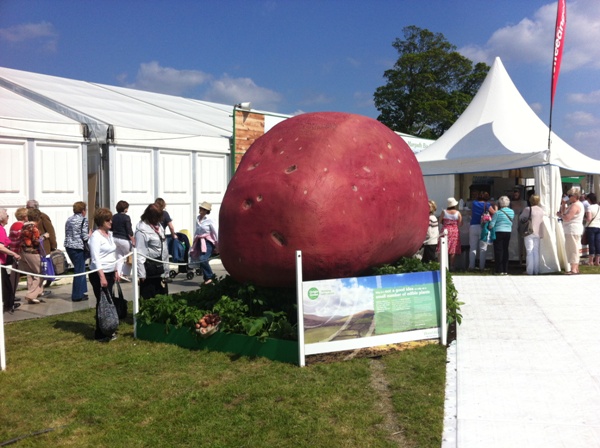 Yes, that is a giant potato……

Due to the varying budget differences for Bloom’s show gardens, it also allowed young, talented designers to come through, something that might not be possible in other competitions, and that is why it is always a must for any avid garden fan who wants to support national talent and the local economy. Article written by Fergus McCarthy Enjoy what you’ve read! Support us and pick up one of our awesome T-shirts and hoodies today, Click the link