Ashikaga Park boasts dramatic and awe inspiring Wisteria displays Located 50 miles north of Tokyo, Ashikaga’s Flower Park contains the country’s largest and oldest Wisteria (known as “fuji” in Japanese). What started out as four giant Wisteria vines in 1996 has grown to nearly 11,000 square feet! The breathtaking park is home to hundreds of enchanting Wisteria vines, creating a fairytale-like environment for visitors. From mid-April to mid-May, the park wows visitors with giant living screens of Wisteria hanging from trellises and grouped in clusters. There are also pathways among millions upon millions of exquisite blooms and Wisteria tunnels that are like something out of a dream. 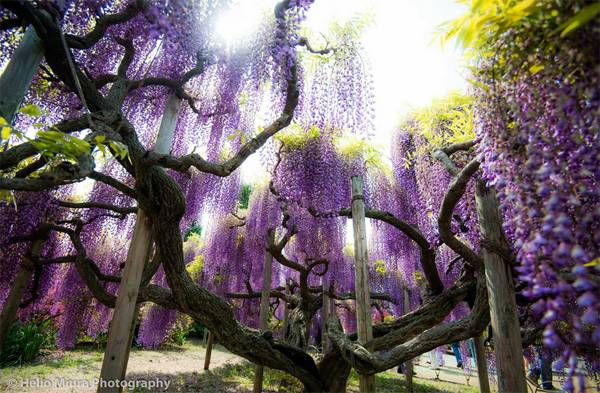 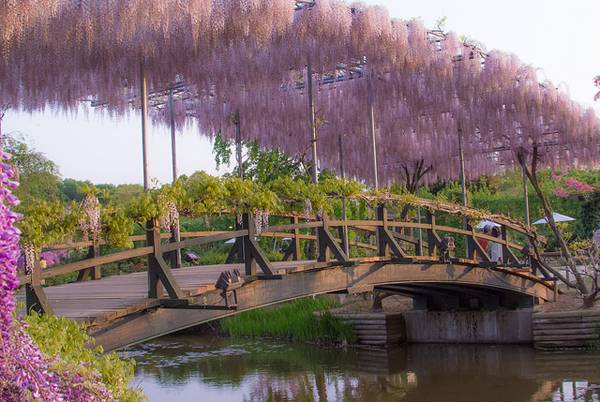 Pruning Flowers and gardens are characteristic of Japan, and Wisteria is one of the most iconic. Wisterias are climbing plants related to the pea, and are native to North America, China, and Japan. Through careful pruning, these plants can be trained to stand upright in tree form, rather than climbing up surfaces. With deliberate pruning and the use of special poles, the branches are held up. The park is said to be home to the most beautiful Wisterias in the world. One great example of this clever manipulation is The Giant Wisteria (one of the largest in the park) that extends over a whopping 36 meters by 33 meters. It forms a living umbrella of leaves over visitors. 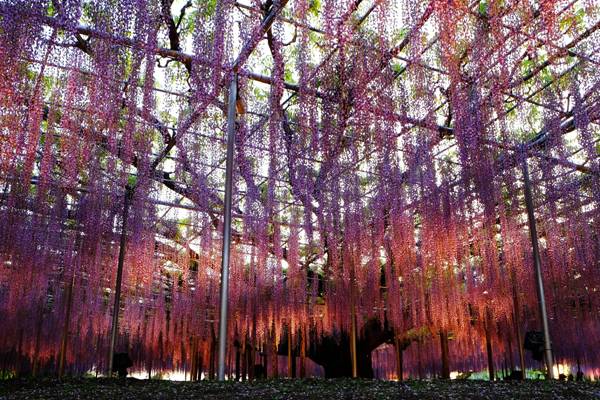 There are more manipulations made with the Wisterias for a dreamy experience, such as the Tunnel of White Wisteria, which is one of a kind in the world and continues for about 76.5 meters. The “Yae-fuji” Wisteria trellis also displays the flower petals that resemble little purple hanging grapes. Another focal point is the tunnel of yellow Wisteria called “Kibana-fuji”, as well as the White Wisteria “Waterfall”. 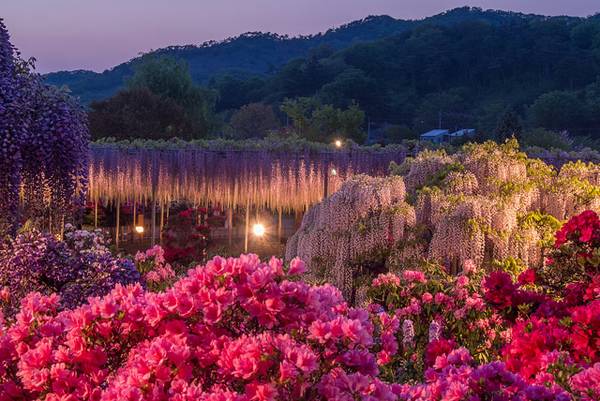 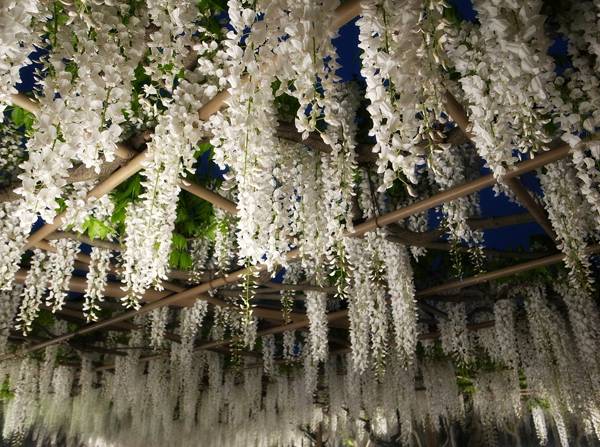 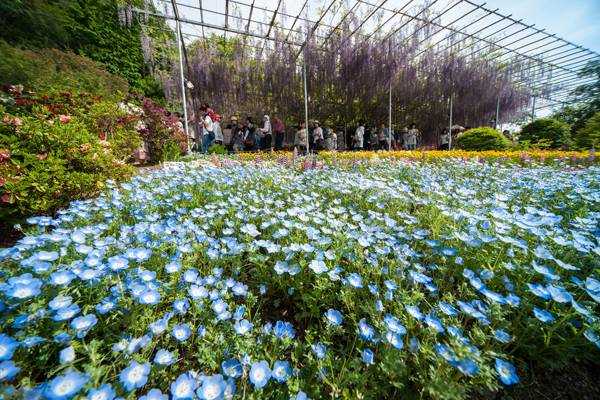 History The park buried 260 tons of charcoal to purify air and to activate and fertilize the soil. Such care in the park cherishes not only plants, but also the environment. There are about 160 Wisterias in the park that are more than 60 years old; one plant is 144 years old. Light pink blooms are followed by purple, then white to yellow. These hanging clusters of eye candy are not the only flowers for show — the park also hosts a wide variety of flowers and trees worth seeing in any season: plum blossoms from February to March, hydrangeas in June and July, lotus flowers from May to October, purple sage in October and November, and roses May through June and September to November. In winter, lights adorn the trees, drawing visitors from November through January. 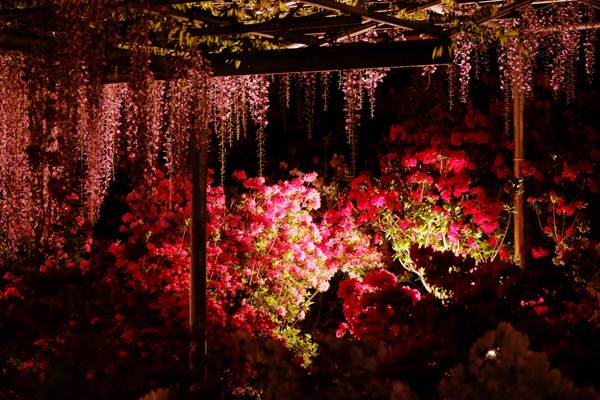 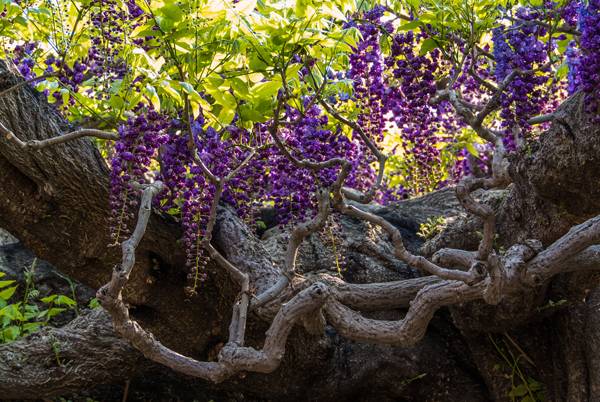 Close up of Wisteria stem at Ashikaga Park. Photograph by Sarah Sutter 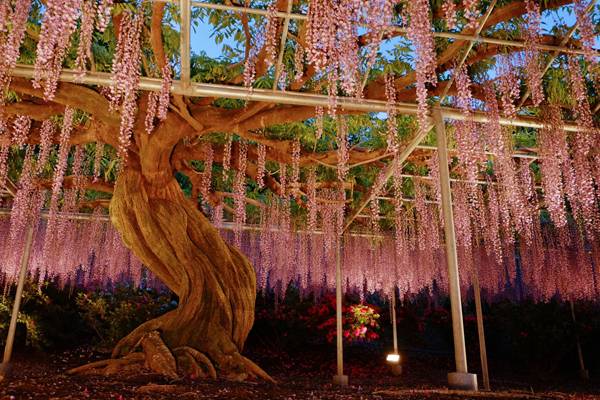 To experience this Avatar movie-like experience of the “Tree of Souls” in real life, you can visit the park from mid-April to mid-May when the Wisteria plants bloom. The entrance fee depends on the season, and is around 1,000 Yen per adult during the “fuji” peak season, when it is said to get very crowded, even on weekdays. The stunning beauty of these phenomenal plants must look and feel even more surreal in real life. The temporal beauty of these blooms once every year makes this park a definite must-see. For more stunning planting, check out: MFO Park in Switzerland Article written by Win Phyo Featured image: Toshiaki NANBA Published in Blog