Park Pergola by West 8 in The Netherlands  Park pergola, by West 8, is quickly becoming the focal point for Máximapark (formerly known as Leidsche Rijn Park), which is in a new residential neighborhood of 35,000 homes to the west of Utrecht, The Netherlands. West 8 says, “The park is essential to counterbalance the inescapable sea of houses and puts its mono-functional character into perspective.” In fact, the entire park concept was the result of a design competition held in 1997 that creates three ‘edges’ to separate the park from its suburban surroundings. Park pergola, along with a re-excavated meander of the River Rhine and a nine-kilometer long ecological zone, is one of these ‘edges.’ West 8 describes the botanical and ecological pergola “as the place where nature and culture come together.” 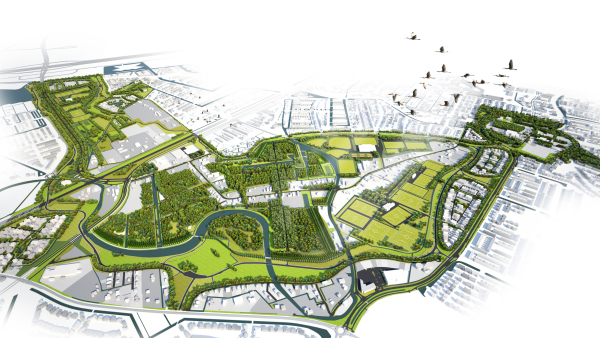 The Pergola Design When completed, the open and transparent, honeycomb-like pergola will be 3,5 km long and 6m high and will surround a 50-hectare secluded courtyard, known as “The Binnenhof,” which “contains woods, water courses, pedestrian areas, a playground and formal avenues which create a secluded green inner world that can be entered only through gateways.” 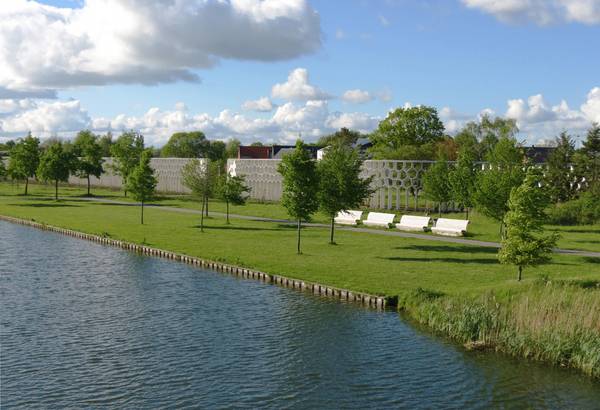 “In a cultural-historical perspective the courtyard is perceived as an illusion of paradise, a secluded area, being in contrast with the outer world. Here people are withdrawn from the world and can retreat into themselves. On entering the Binnenhof you can leave your worries behind; all you have to do is to enjoy nature and have a good time.” The surrounding pergola is the boarder of the Binnenhof and serves to mark the transition between the two worlds. At the same time, the crossing is in itself an attraction to experience before entering the hidden paradise. “Elevated honeycomb-elements, made out of durable concrete, with supporting columns formed as gateways, turn the pergola into a functional and at the same time recognizable entrance to another world.” 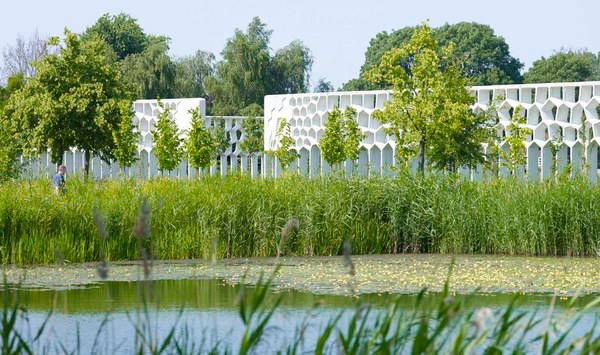 Biodiverse Design  Once completed, the pergola will become a miniature eco-system by housing climbing plants, as well as ferns, moss and other vegetation. The design team also consulted with ecological experts to add places for shelter and nesting for a variety of animals in and under the pergola. These additions give more space to nature while bringing nature within the reach of park visitors. Designers envision the pergola as becoming a large-scale ecological connection due to its length and also based on the path that it follows through Máximapark. “The pergola follows a route by which it crosses and accentuates the different parts of the park. For instance, the pergola doubles itself over a length of almost 200 meters to surround a sculptural garden, and to enclose the new rosary it transforms into abstract silhouettes of daisies.” 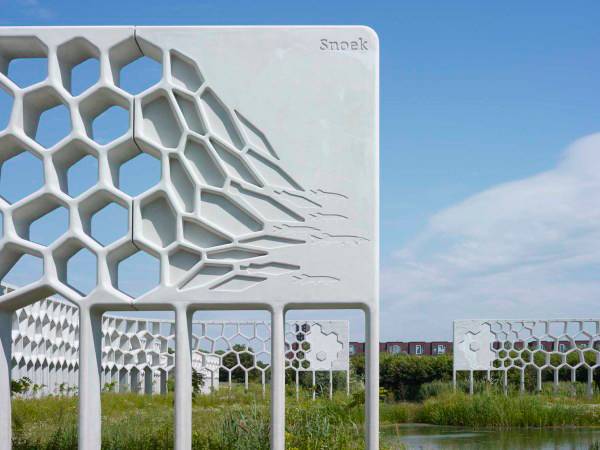 A close up of the pergola structure. Image credit: Jeroen Musch 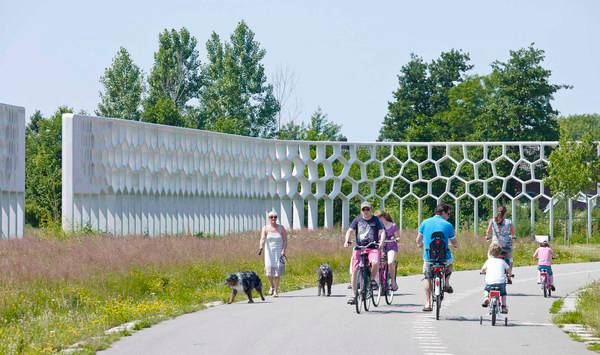 There is also a cemetery that lies on higher grounds and is surrounded by water and the pergola. On the outside of the pergola is a linear park of flowery meadows, known as the ‘Jac P. Thijsse Ribbon,’ as well as sports fields, allotment gardens and other facilities. A track allows pedestrians, cyclists and skaters to move through the Ribbon with a constantly changing perspective. West 8 designers say, “Above all the park will offer a factor of growth. With its consciously chosen long-tern lifecycle it will grow beyond the eternal youth of the suburban environment.”  The Park Pergola at Máximapark was chosen as a finalist, out of over 650 entries, for the Dutch Design Awards (DDA) in the subcategory, Spatial Design in 2013. These awards seek the best Dutch design within the Netherlands and across different disciplines each year. “They are intended to work as a platform where developments in design can be reflected and acknowledged, a showcase of the best contemporary work in the country.” See also: Major Redevelopment of New Holland Island Recommended reading: Design with Nature by Ian L. McHarg Article written by Erin Tharp Published in Blog