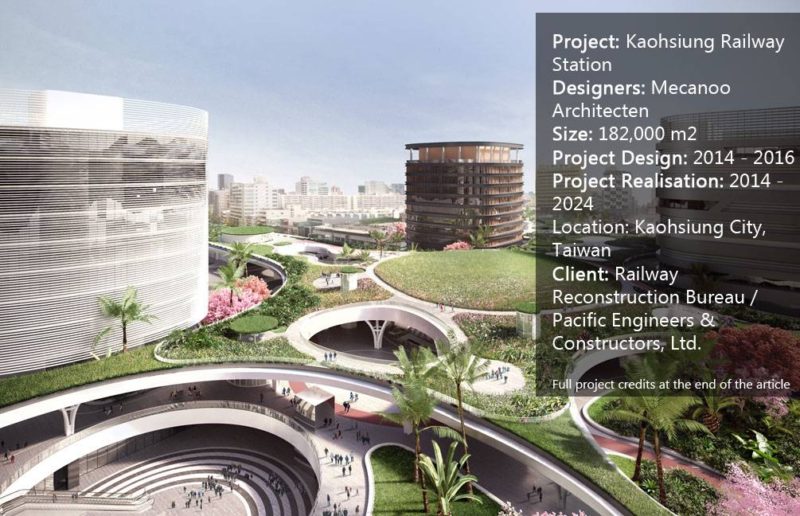 Article by Tahío Avila – Kaohsiung Station, by Mecanoo Architecten, in Kaohsiung City, Taiwan Kaohsiung is the second most populous city in Taiwan with almost 2.8 million inhabitants and it represents an important transportation, manufacturing and industrial centre of southern Taiwan. Being an industrial centre is a good start for a city to become an important core, with a good transportation system and connections from airports to subway stations, and Kaohsiung has the basis for it; the train station or high-speed railways have a connection straight to Taipei (in the northern area of the island) and it has a quite modern subway system; the Kaohsiung Mass Rapid Transit, launched in 2008. 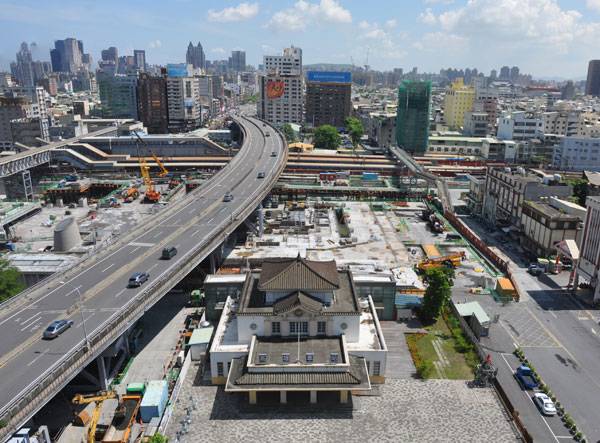 This subway station is formed by 2 major lines and 38 stations; In 2014, the Dutch firm Mecanoo Architecten, was hired to design the new enlargement of the subway station and connect it with the train station, the airport (which is the second largest airport in Taiwan), and to offer a fresh and better way to move around the city.

Keeping it Green and Traditional

The key concept of the new Underground Railway Project is the relevance of green public spaces and the station’s connection with the urban context, which, right now, is an over-constructed and visually disorganized area; an integrated sustainable design will be the way to transform Kaohsiung into a sustainable city and the firm has the way to do it. 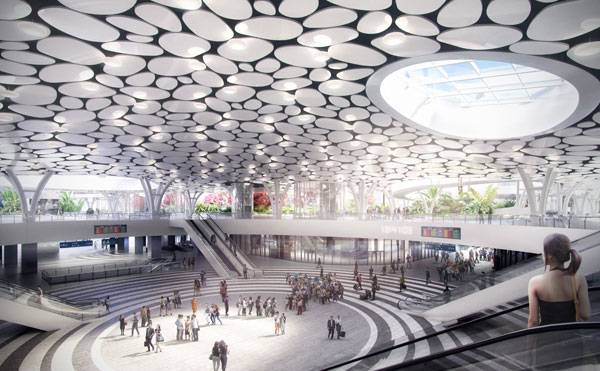 For this, the designers created a green canopy which occupies 3.5 hectares of public spaces; open, sheltered and shaded, for pedestrians and users of all transportation in the city. As Mecanoo’s creative director, Francine Houben said:   “The sprawling green canopy protects the open public plaza underneath from Kaohsiung’s tropical climate like large trees would do. Here people can meet, enjoy a refreshing breeze, or visit events that take place at the station, like a farmers’ market, second-hand market, traditional open-air opera or a mobile library”.     All of these activities are the same ones that take place in the city, but this time, in an organized spread of natural area in the middle of a dense urban condition.

Layered Landscape is the New Black

The designers proposed a “Layered Landscape” for the renovated station, where people can immerse themselves into different atmospheres as they change levels; passing through a central sunken hall with 75-metre clear span with a ceiling design inspired by the traditional red lanterns used to illuminate the sky of some villages in Taiwan when it’s celebrating time; a semi-open high ceiling covered with oval-shaped lights that not only reflect the ambient light but remind viewers of the way the lanterns look from below as they float. This plaza connects to the underground trains, metro and other facilities. 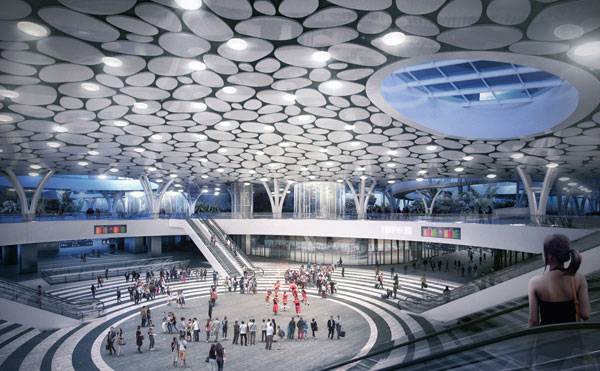 The levels above are destined to become public spaces for pedestrians and cyclists. The bicycle ramps take the users to the canopy area and to a bicycle network which connects to either East or West Kaohsiung city. This multi-layered station will work as a transportation nerve center, focalizing train, metro, bus services, taxis, cyclists and pedestrians all in this area. The plan has 7 underground stations and a 9.75-km tunnel. The underground levels have restaurants, shops and gathering areas all connected to the stations. 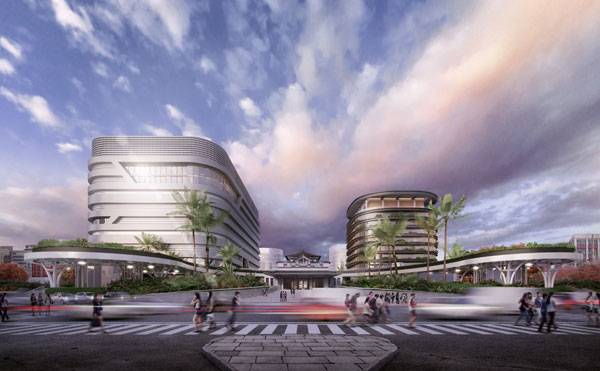 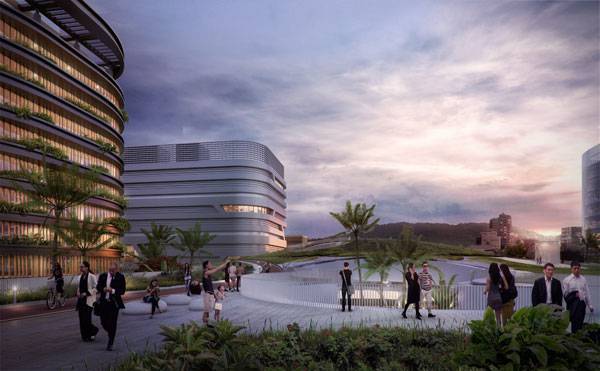 The current colonial Japanese station building will be relocated to its original site and will be included into the design as a symbolic signature between the past and the future of Kaohsiung as a distinctive, spiritual and sustainable city. In order to form this great accessible park in the surface, and form a fresh but yet constructed area, the design includes the demolition of the viaduct that crosses the city near the Japanese building. 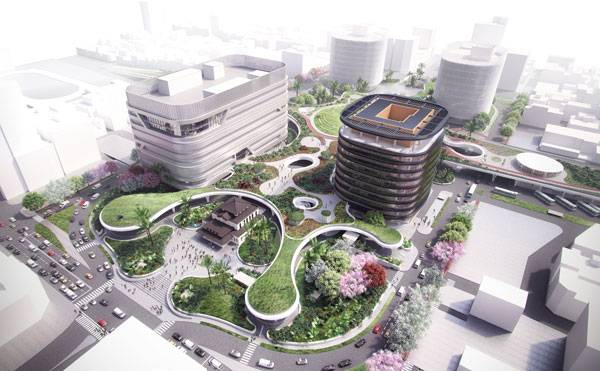 A New Vision for Taiwan

The vision of the firm is to turn Kaohsiung into a sustainable city; they not only came with the building’s concept but they focused on activating all the “senses” of a functional city. This proposal is about the layered and unified landscape, the merge of new and old, green and constructed, and the meaning of the people’s presence in this centre every day, making it alive, just like the natural intervention will change the perspective of the city with its green formal park. Talking about fusion of new and old construction style, do you think that’s the way to go when it comes to redesigning a city? Let us know what you think! 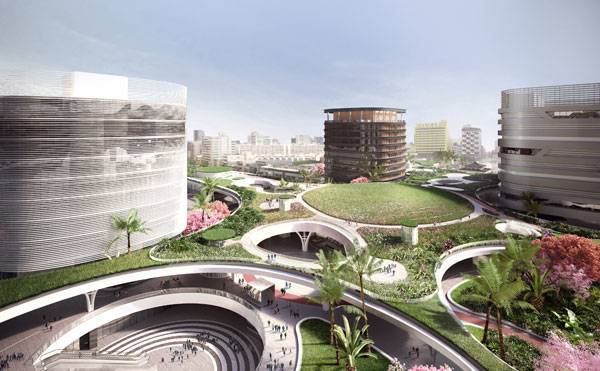