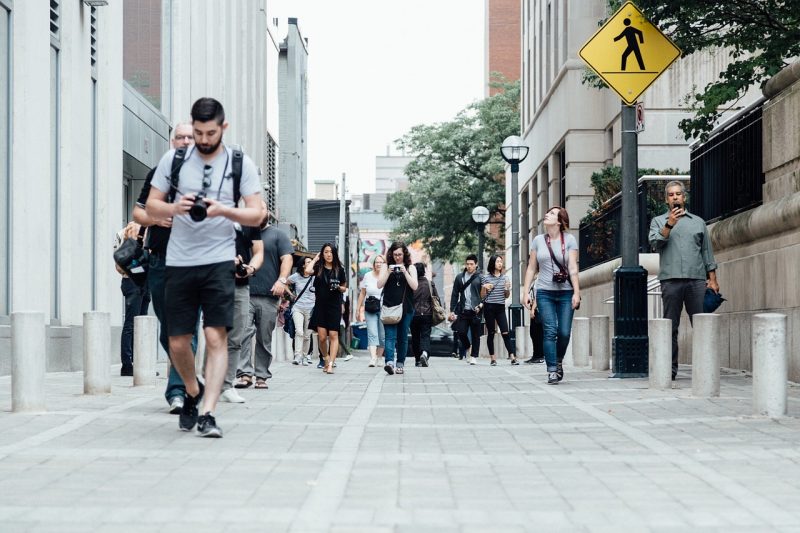 For too long the city has been designed for cars. Pedestrians can often feel like second-class citizens, as cities are much easier to drive into than walk through. Recently, built environment professionals have been advocating improving the quality of our built environment by making cities easier to navigate by foot. In this article, we look at how landscape architects are especially well qualified to implement walkability in our cities and how landscape architecture can improve the quality of our walkable urban environment.

A simple definition of a walkable city or neighbourhood is one that is enticing to pedestrians, encouraging walking over other forms of transport. Professionally, the term covers several phenomena. In her 2015 paper ‘What is a Walkable Place? The Walkability Debate in Urban Design’, Ann Forsyth of Harvard University identifies three definitions of walkability in common use today:

The means by which cities can be walkable i.e. compact, traversable, physically enticing, and safe

A focus on how walkability can provide holistic solutions to a variety of urban problems.

The Benefits of Walkable Cities

On a personal level, walkable neighbourhoods have the capacity to positively impact upon an individual’s finances. Personal car ownership can account for up to 20% of a person’s income. Not paying for parking costs can also add up over a year. At a community and national level, healthier people rely less on public healthcare, thus reducing the burden on public expenditure. The walkability of a neighbourhood also has positive impacts on crime and urban decay, as well as being a reliable predictor of higher housing valuations.

At a strategic level, things like urban density and traffic planning play a pivotal role in the walkability of a city. Many of the Top Ten Walkable Cities have great infrastructure for walking. If people can safely walk from home to work and to the shops, then they will. However, the means by which pedestrians navigate their city falls within the remit of landscape architecture.

Key to encouraging walking in the city is making the environment inviting for pedestrians. This means making routes that are attractive, functional, and safe. Several landscape interventions can assist in meeting these aims. 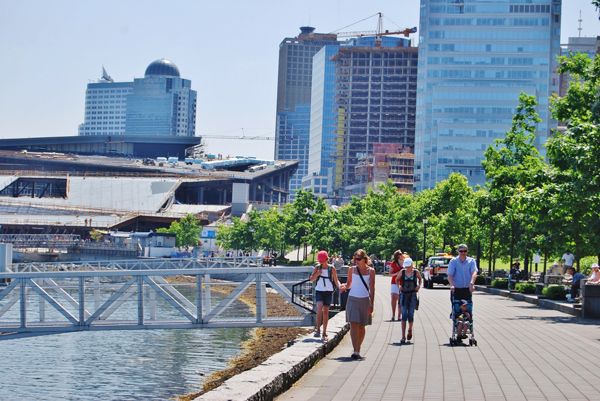 Street trees can slow vehicular traffic by an average of 7-8 mph (11-13 kph). By incorporating trees into the streetscape at a density of one per 15-20 feet (4.5 m – 6 m), not only does the local environment benefit from the well-known effects of reduced heat island effect and power consumption, and improved stormwater management; but also, streets become safer. A 2006 study by Kathleen L. Wolf notes that street trees resulted in reductions in traffic accidents of around 45%.

The inclusion of well-designed pocket parks may seem like an obvious aid to increase the walkability of neighbourhoods, but their placement and distances between them need careful consideration.

In walkable neighbourhoods, several small pocket parks encourage walking through their accessibility by foot. The National Recreation and Park Association recommends placing pocket parks within a five to ten-minute walk of its users. This translates to a maximum interval distance of not greater than 1.2 miles or 2 kilometres between parks. Pocket parks should be placed along well design routes and be designed with site specificity in mind. They may take the form of urban squares, green parks, community gardens, or community orchards. They should be placed at nodal spaces and be supported with surrounding mixed-use development.

There have been some famous examples of linear parks retrofitted to existing infrastructure in recent history, notably the infamous Highline and Promenade Plantée. This trend for linear parks has been picked up in projects including, The Green Line in New York and The Meadoway in Toronto.  The Madrid Rio project by West 8 and MRIO arquitectos goes even further and integrates large linear green spaces like Salón de Pinos and relocating a major road and parking underground to accommodate the Avenida de Portugal, a vibrant new public open space.

In terms of walkability the often-underappreciated smaller sibling of the linear park, the urban greenway, has much to offer. Urban greenways provide many of the same benefits of linear parks, but on a smaller, and often more affordable scale. One of the main benefits of greenways over linear parks is that they take up less space. Much like pocket parks, urban greenways can facilitate walking at a local scale, provided they connect with useful nodal spaces that are not too far from each other. One key consideration when designing greenways is visibility and safety. Chuck Flink, founder of Greenways Incorporated urges that, although greenways have a lower than average crime rate, they should be designed so that users feel safe. He suggests regular exit/entry points to not only increase connectivity, but also the feeling of safety as users have regular ‘escape routes’. Visibility lines should be kept clear by the careful consideration of planting, preventing places that people can hide in.

All Walks of Life

Walkable cities have numerous social, economic, and health benefits. At the strategic level, increasing density and mixed-use development, and placing an emphasis on the pedestrian can facilitate walkability in a city.

Landscape architects can make a substantial impact on the walkability of neighbourhoods through the inclusion of well-designed green infrastructure. A carefully considered tree-lined streetscape can calm traffic, improve aesthetics, and provide a safe environment for pedestrians. Well placed pocket parks can act as attractors, encouraging people to walk from place to place. Linear parks and urban greenways provide physical structure for walking, as well as a more attractive option than travelling by vehicle. The key to successful implementation of any of these is good site-specific design and integration with the surrounding urban fabric.