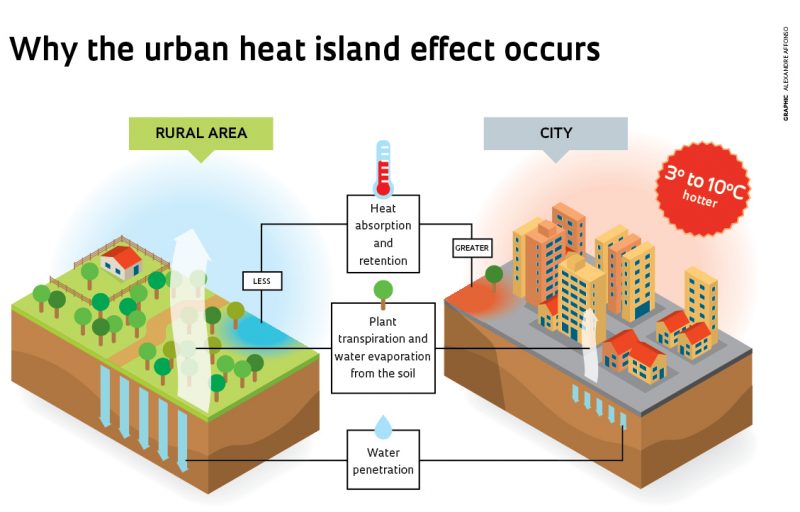 Global temperatures are rising. This is especially felt in urban areas due to the urban heat island (UHI) effect, where temperatures can be 10oF (5.5oC) higher than the surrounding countryside. This phenomenon is due to several factors that combine to alter the local microclimate of an urban area. However, several techniques can be employed by landscape architects to help combat the local rise in temperatures, saving money, reducing global warming, and making a more pleasant environment to live and work.

In this article, we look at what the urban heat island effect is and what landscape architects can do to combat it.

What is the Urban Heat Island Effect?

Objects of different colours reflect varying amounts of light. Surfaces with a greater albedo (or lighter colour) reflect more of the sun’s energy. Darker objects tend to absorb more radiation and therefore heat up more quickly. As our cities are usually made of darker materials like concrete and asphalt, they absorb comparatively more energy from the sun and therefore heat up more quickly than the surrounding, lighter coloured and vegetated countryside.

Cities tend to drain surface water quickly into sewers, where it is trapped, and cannot evaporate as easily. In rural areas groundwater drains through the soil and is transpired by plants. The evaporation of water in rural areas adds a cooling effect to the local climate.

Finally, things like air conditioning and vehicles add small amounts of heat to the air in cities, contributing to the UHI effect. 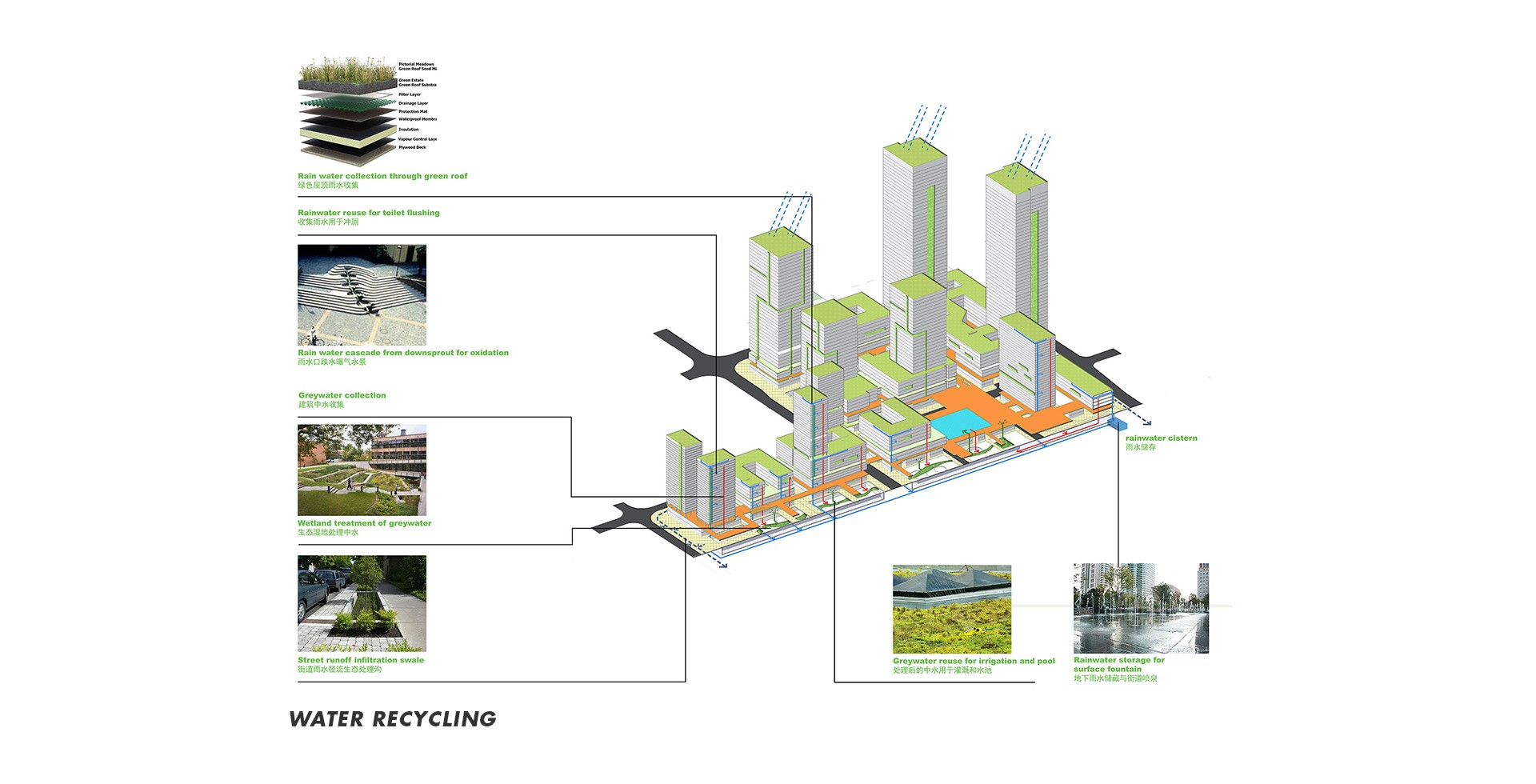 There are various ways in which the UHI effect can be mitigated through technology and the use of landscape interventions.

One way to decrease the amount of the sun’s energy that is absorbed by a city is to use lighter coloured materials. However, light colours also create glare, which is not only annoying for city residents but can cause problems for drivers. One solution is to use lighter coloured paints on higher roofs. These are known as ‘cool roofs.’  Another technological solution is to use special reflective paints that absorb visible light while reflecting invisible light. As these paints do not reflect visible light they can be darker in colour. However, the extent to which reflecting only infrared light has on the UHI effect is still under debate, with some experts claiming that the benefits are minimal. 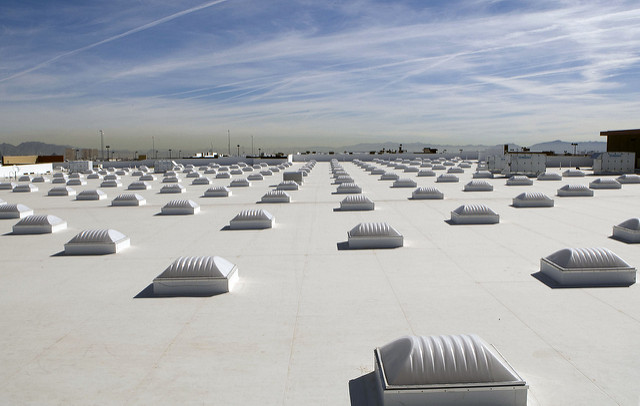 Another approach is to actively use the radiation from the sun to generate electricity. Photovoltaic panels can be used to provide shade to a building, preventing the thermal mass of the building heating up, and radiating its stored heat at night.

The benefits of green roofs on stormwater management, biodiversity, habitat creation, and building insulation are well documented. However, they also have an important role to play in mitigating the UHI effect. Not only does the higher albedo of the plants reflect more of the sun’s energy, but as the plants transpire the surrounding ambient temperature of the building is lowered through evaporative cooling. Green walls have similar effects in reflecting more light and evaporating moisture.

Tests have shown that while wet, a permeable paving system of interlocking concrete blocks performed localised cooling better than impermeable surfaces. For permeable surfaces to have a significant effect on the UHI effect it is important to note that there should be regular rainfall to evaporate. Also, the depth of the water table below the surface also impacts upon the permeable paving’s cooling efficiency.

Vegetated surfaces like green parking lots combine many of the benefits of green roofs and permeable paving.  All too often parking lots are made of dark coloured, impermeable asphalt. However, by using a material like concrete Grasscrete, or porous plastic paving units, the cooling benefits of vegetation and permeability can be exploited, while still maintaining a degree of usability.

There are several ways in which trees help in mitigating the UHI effect in a city. As tree leaves are usually lighter in colour than the surrounding urban fabric they reflect more light. Trees also affect their local atmosphere by transpiring. A large oak tree can transpire as much as 40,000 gallons (150,000 litres) per year. Street trees are particularly good at shading buildings and sidewalks, effectively filtering the amount of radiation that reaches the lower albedo surfaces.

As bodies of water evaporate, they cool their environment. By increasing the surface area of any water feature in the urban landscape, the amount of evaporation is maximised. Therefore, there is a strong argument for including water in any urban landscape, whether it be a lake, pond, or daylighting an old stream that has been covered over, such as the La Rosa Daylighting Project in Auckland, New Zealand.

One of the limitations of the cooling effect of permeable paving is that when there is no rainfall to evaporate, they do not cool their environment. Traditionally, the focus on stormwater management has been to quickly discharge the peak flow into stormwater drains or encourage infiltration. However, by harvesting rainwater, storing it, and allowing it to evaporate from surfaces, not only helps to level out the peak flow of storm events, but it also extends the time permeable paving has a cooling effect. 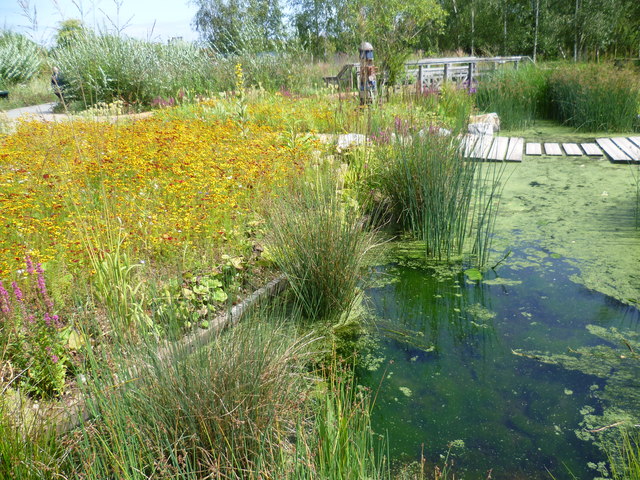 Sustainable Urban Drainage Systems (SUDS) have proven benefits for stormwater attenuation. Rain gardens and swales are forms of SUDS that collect rainwater during storm events and allow it to slowly infiltrate into the ground. As they retain the water for a period, the water has a greater time to evaporate. By including planting, rain gardens also perform evapotranspiration, cooling the air further.

There are several ways architects and landscape architects can reduce the urban heat island effect. Through technological means, the albedo of surfaces can be increased to reflect more of the sun’s energy, thus reducing the amount of energy absorbed by buildings.

However, there are also a great many tools at the landscape architect’s disposal that can mitigate the UHI effect. By incorporating green roofs and green walls some of the sun’s energy can be reflected, rather than absorbed. By including shade producing deciduous street trees into the streetscape, sidewalks and buildings can be shaded from the sun. Permeable paving can encourage evaporative cooling at the street level, and when used in conjunction with rainwater harvesting can provide maximum cooling when it is needed most. Finally, many sustainable urban drainage system tools can be used to retain water in the landscape, providing evaporative cooling. All these measures will help reduce the ambient temperature of the local microclimate and mitigate the overall urban heat island effect.