On The New Shores – The Lahnaue Framework Plan by A24 Landschaft and Landschaftsarchitektur Gmbh, Gießen, Germany. “You don’t know what you’ve got until it’s gone”.This ballad from the late 1980s came across my mind and is so true when we see the appalling states of waterfronts in countless cities around the globe. More than seams between water and city, waterfronts are metaphorical links to our past, present, and point the way to our future. Over the years, we have neglected these waterfronts without knowing the potentialities they could offer in the urban realm. It has been the recent public demand for waterfront accessibility that has triggered the transformation of once-neglected river edges into the heart of the city. 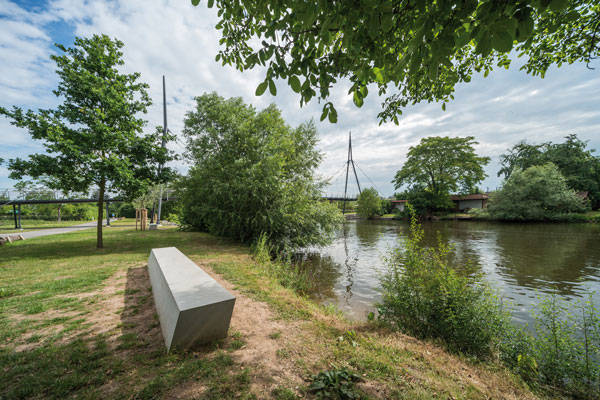 From an industrial heritage of the Lahnaue Framework Plan

The Lahnaue in Gießen, Germany, is one such example of a waterfront landscape movement along the Lahn River, the eastern tributary of the Rhine. The railroads along the banks bear witness to the former importance of the Lahn River, which has been a means of transport since the late Middle Ages. Now, naturally, the question arises — what turned this multifunctional waterfront into such an underutilized, unsightly river precinct? The answer is the construction of the railroad in 1846 with the high embankment alongside the river, detaching the city and its people from the water. As a result, meadows formed an inner city periphery. 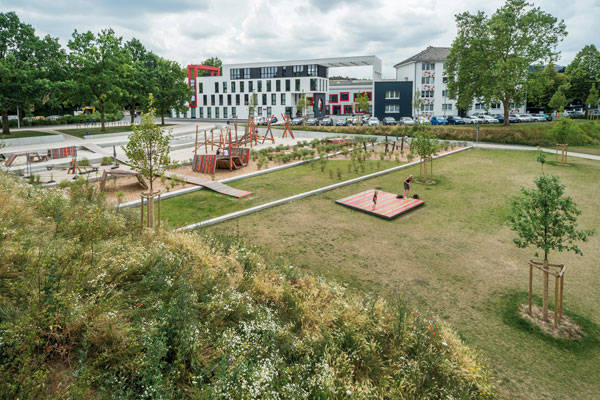 Plagued with neglect, the meadows gradually turned into either inaccessible properties or vast parking areas. That’s when A24 Landschaft recognized and harnessed the social and geographical importance of the Lahn River to revitalize it. Interweaving landscape infrastructure and urbanism into a unified whole through the Lahnaue Framework Plan The Lahnaue Framework Plan encompasses the entire inner city river basin and is divided into six segments. The 2014 State Garden Show in Giessen and its public interest has inspired the designers to accomplish the two stages of the project. 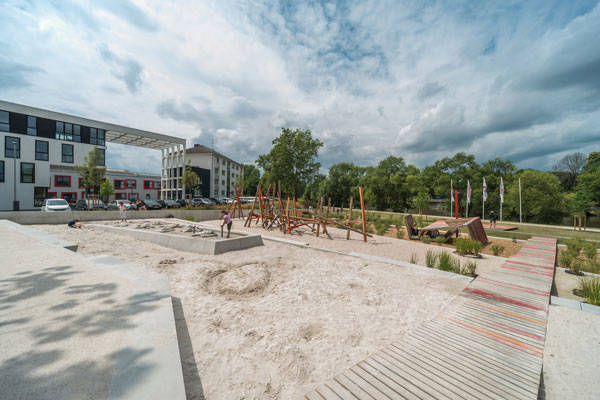 The overall proposal is characterized by the open and extensive grassland park in the north stretching to the existing river meadows in the south, the redefinition of the main connection route with the city through the integration of adjacent buildings, rejuvenation of old gardens, the connection between those six segments, public squares, and the definition of cycle or pedestrian bridges across the river. Not least, the concept reclaims private property along the river for public use, initiating measures for long-term preservation of the riverscape. Related Articles: 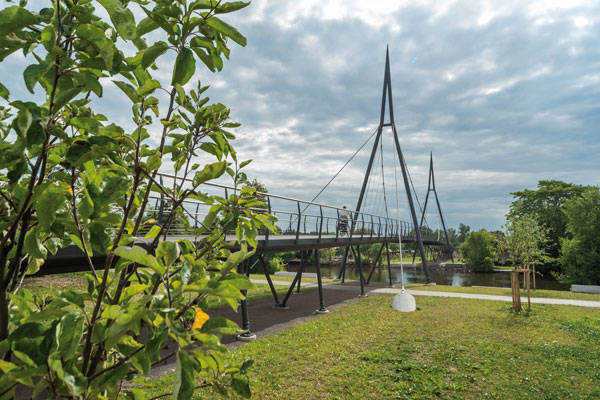 A vibrant, multi-use Public Square The first significant step in the lahnaue Framework Plan was the creation of a newly built entrance to the city by unsealing the areas. This entrance, “By the Mills”, started reconnecting people with the river and is a great way to make people emotionally attached to that place and to develop a sense of belonging for the plaza. At the entrance is a plaza that has become a magnet for people. The plaza creates a civic gathering place, surrounded by a four-tiered play area, an elaborate mill garden, a new circulation system of boulevards, and the significant icon — the bridge. 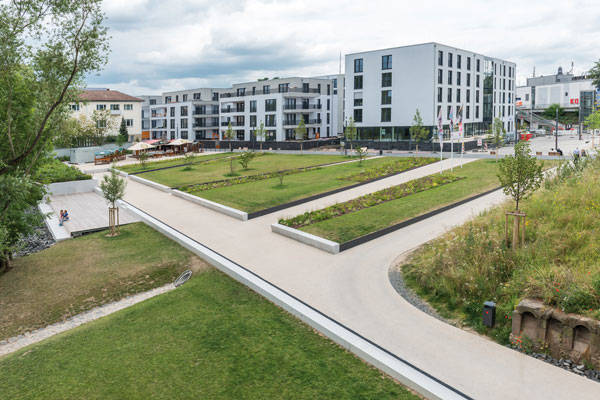 Recreation for all at the Lahnaue Framework Plan The site of the former parking lot is now a four-tiered playground across the end of the square, which invites children of all ages. The leading reason for this tiered shape is to imitate the features of the riverscape and the elements of the meadows. The platform along the river not only provides visual direction and a path of gradual approach to the water level, but also broad steps that can be sat on while luscious streamside greenery invites you closer, to play in and linger by the water. Benches and trees are arranged so as to allow people to experience the solitude of nature in the city. Materials used and the Grassland Park at the Lahnaue Framework Plan So far, a limited range of materials have been used, including concrete and wood, that define benches, paths, and edges. This highlights the green element, unifying the entire space within a low-maintenance regime. Canopy trees provide shade; shrubs provide seasonal colors and scale. They provide us with a natural way to experience the soothing breezes that blow along the river in the park. 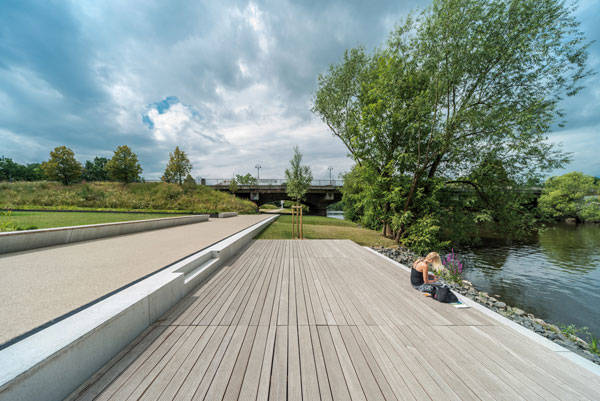 Lahnaue Framework Plan’s connecting spine The second part of this project is the new pedestrian and bicycle bridge crossing the river at the northern part of the city, which has greatly improved the city’s infrastructure. It is one of three bridges in the framework plan. The bridge is a platform equipped with ramps and railings, seamlessly recreating a link between the inner city and the Lahn River. The bridge lures people to enjoy either a ride or a walk or to extend a cross-regional relationship. As one travels across the bridge, surrounding trees, their overhanging branches, and their reflection in the water produce a sense of traveling through a green tunnel. Perhaps a paradigm shift for waterfront design? In conclusion, A24 Landschaft has created a truly integrated open space and has made the northern riverside accessible to all. With the gradual implementation of its additional goals from the framework plan and with consideration in terms of sustainability, it will hopefully set a new benchmark for the design of waterfronts! Recommended Reading: