OKRA take over car park to create Catharina-Amalia-Park As world population increases and urban open space becomes threatened, cities are forced to look for new ways to create multifunctional spaces that bring value to communities and solve numerous problems simultaneously. The city of Apeldoorn in the Netherlands found itself in this predicament over the past 25 years. Brinkpark, an urban park in the heart of Apeldoorn, was turning into a parking lot, with little room for people and an abundance of pedestrian and automobile congestion. The city brought in the landscape architecture firm OKRA to help realize its vision for a greener park that could accommodate numerous user groups, hide the parking and the presence of automobiles, and reveal The Grift. OKRA returned with a plan that would accomplish all of these goals and more. After numerous community meetings, a design was decided upon that would satisfy each of the stakeholders’ desires. 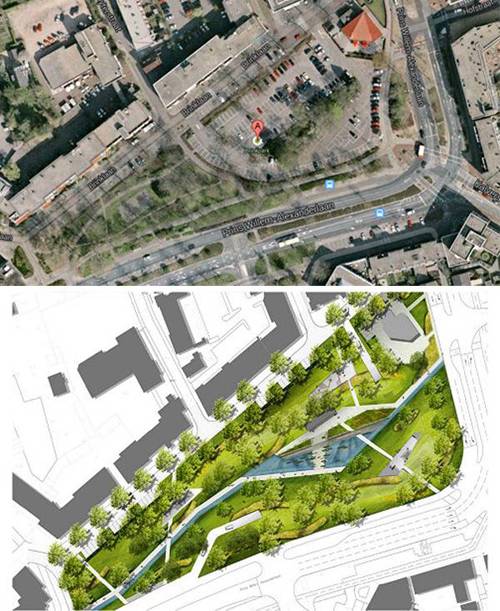 Before and After. Imaged credits: Google maps and OKRA

Renaming the Park Brinkpark was renamed Catharina-Amalia Park in 2013 in honor of Princess Catharina-Amalia, eldest child of King Willem-Alexander and Queen Maxima. Central to the park’s design is the presence of The Grift. A once hidden stream, replaced by a canal in the mid-1800s, The Grift has been revealed to the surface from pipes and highlighted as the unifying design piece throughout the park. The landscape around The Grift has been sculpted to serve as a representation of the Veluew District, a forest and ridge area in the Netherlands. Nature and Happiness Communities everywhere are now realizing the importance of having their natural systems revealed and accessible as an amenity to the community. The presence of these natural elements increases residents’ overall happiness and pride in a community. These public spaces also increase the economic value and generate revitalization within communities. 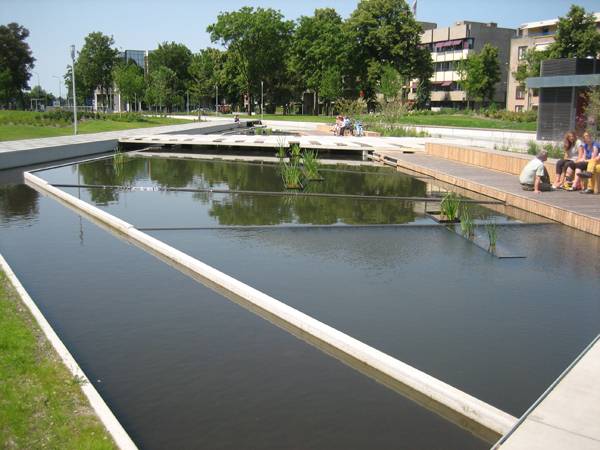 The modified natural feature at the park. Credit: OKRA 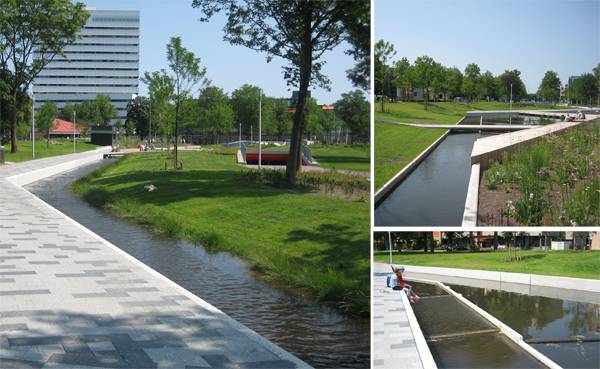 Life flow of the park, based on a already existing natural element. Credit: OKRA

The Design Alongside The Grift, you will often find residents lounging on a wooden bench wall or with their feet in the cool stream. The stream opens into a larger basin with a series of small fish ladders descending through the park, where children play with toy boats and excess stormwater can be held. Undulating paths cross the site and cut through raised grassy berms. OKRA created these cuts in the landscape to elevate the importance of one continuous green experience throughout the site. Following this design idea, the skate park and playground have been cut into the landscape so that they, too, can be subordinate to this unifying green experience. 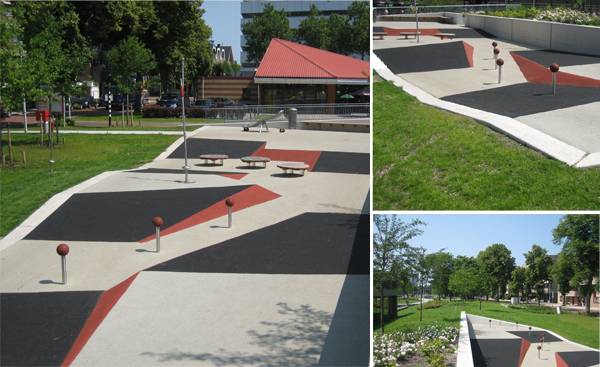 Above any other goal, though, people were to be the primary focus of the park. The bulk of the parking has been moved below ground in a 240-car, two-story parking garage colorfully painted red, white, and gray and is lit by day by a single transparent stairwell that exits into a building in the middle of the park. Traffic lanes and surface parking have been pushed to the perimeter of the park, while dog walks, lounge areas, and walking paths have been created within the interior. 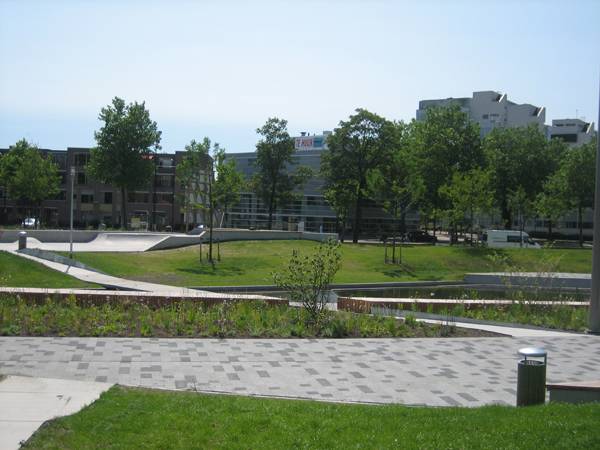 An overview of the park. Credit: OKRA

Apeldoorn’s Catharina-Amalia Park is certainly a success story for the community and one that continues to illustrate the design community’s ability to solve cultural, ecological, and planning design problems. Even more impressive — the park’s features have been created on the roof of a two-story garage. The new trees, undulating green spaces, the creek, and all of the play areas sit as one large green roof in the middle of downtown Apeldoorn. Apeldoorn has made a great decision to convert its city center entrance into a public green space. Nothing is more welcoming in a city than open space for people. Article written by Cameron Rodman Published in Blog