What happens when a memorial is rested with the intention that it will be occupied as an everyday space? What happens when the loss of a person is not remembered with an old tradition of an inscribed plinth but created as a space that allows people to embody the whole experience of joy and commemoration? “Reaching Out, Letting In” is the title of Gustafson Porter’s high-profile and highly controversial memorial fountain to the most loved princess in Britain — Princess Diana. The concept of the Diana Memorial Fountain: “Reaching Out, Letting In” embodies the qualities of the Princess of Wales that made her so loveable: her inclusiveness and her accessibility. The fountain is a sculptural element in its own right; its presence draws people toward the space, yet has a gently expansive energy that radiates outward into the landscape. “Above all I hope that it provides a fitting memorial for the princess and does credit to the amazing person that she was.”

The fountain is a space without fixed routes that leans on the long, sinuous lines of a hill where the water flows fast and relentlessly on a bed of white granite, made with advanced technologies. The use of the groundbreaking technology is evident when looking at the individual computer-cut pieces of granite connected at intervals. To start with, Kathryn Gustafson and Neil Porter created a clay model of the fountain. Once completed, a rubber mold of the clay model was created and the resulting cast was scanned by Ford Motor Company to produce a “three-dimensional scan file.” This scan file allowed the design team to create sections through the memorial granite ring and the surrounding landform to develop other design features in detail:

“This was the first time that this software had been used for architectural purposes — it had to be adapted from its usual automotive industry applications.” Each feature of the fountain is developed to portray a different mood or character reflective of Diana’s life, but designed to appeal and refer to everyone’s life. There is a “Source” at the highest point where the water bubbles up from the base of the fountain. From this point, it runs down separately in two directions — East and West. 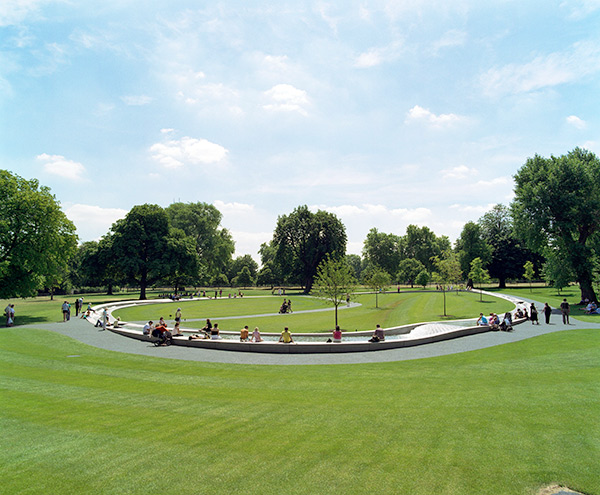 East The water on this side leaps down a series of steps that look like intricately textured drapes of fabric. Following this, there is an entry point for people to access the heart of the oval. The water then enters a sculpted feature so that it can gently “Rock and Roll” while traveling along a subtle curve. It then picks up momentum where five jets create patterns of the water, which the designers have called “Swoosh”! West The channel on the west has been highly textured to reflect natural forms of a “Mountain Stream” to create a lively play of water. The channel widens out as the water travels further down and air “Bubbles” are introduced. These bubbles are carried downstream as the water becomes a tumbling cascade of whitewater as it corners over a waterfall. A “Chaddar” is a traditional feature in Mugal gardens that allows water to flow over an elaborately carved stone. The prominent feature allows water to then spill over into a “Reflective Pool”. Here, the two sides of the water combine and end their journey at the lowest point of the water feature. The water is then pumped back into the Source to continue its unending cycle. The water cycle is also a part of the larger ecology of the Serpentine Lake. Collaboration with hydraulic engineers was a key factor in doing so, with fresh water being pumped out of a 100 meter deep bore hole and held in a tank below the ground. The water circulating the fountain is untreated and monitored regularly for good water quality. Ten percent of the water flow is also drained into the Serpentine to keep the constant flow of water to reduce the algae bloom during summer time. These features are found in the figure of Diana: approachable, tangible, cozy, never still, and, in a way, troubled. Depending on whether the water flows freely, calmly, and flowingly, or splashing and gurgling, the different settings shift the mood of the people into the idea that a person’s life should be rejoiced. The memorial could be taken as a mere landscape design — the site can be visited, appreciated, and returned to many times purely for its enjoyable qualities as an open space. Hence, the energy and the spirit of Princess Diana are re-enacted from the way people interact with the space and with each other. Article written by Win Phyo Published in Blog