Article by Terka Acton Garden of Remembrance, Marburg, Germany, by scape Landschaftsarchitekten GmbH, Düsseldorf, Germany There is an open space in Marburg’s otherwise built-up city grid, a space that marks a significant absence. A synagogue designed by architect Wilhelm Spahr stood here from its completion in 1897 until its destruction on “Kristallnacht” — Nov. 9, 1938. From that point forward, the Nazi regime escalated the persecution of the Jews in Germany and Austria. Many synagogues were destroyed, along with the communities that built them. All but annihilated in the first half of the 20th century, Marburg’s Jewish community has since begun to rebuild itself, and its members have been determined to turn what had long been a gap in the urban fabric into a space that would be both a meaningful memorial to the people and culture destroyed in the pogroms and a public space integrated into the life of the city. 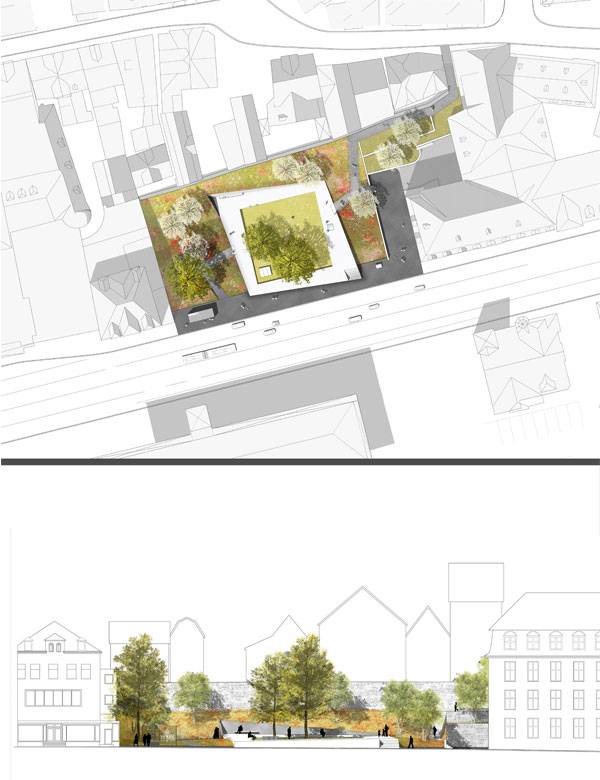 Masterplan and section of the Garden of Remembrance. Image credits: scape Landschaftsarchitekten GmbH 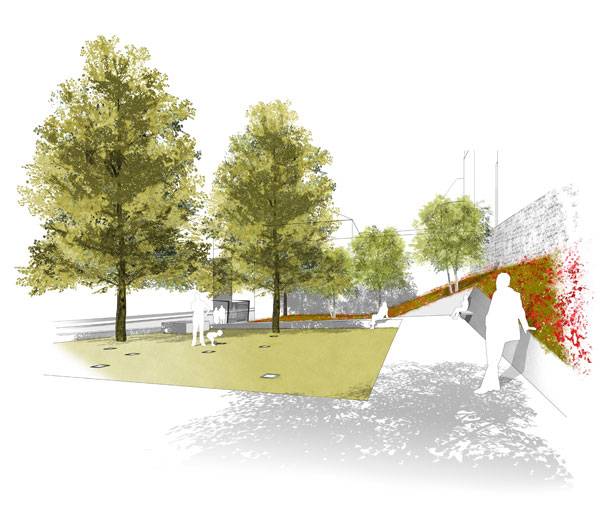 Realization of the Design Most visitors approach the Garden of Remembrance from Universitätsstrasse at the point where the pavement widens into an elongated square paved in black basalt. It is not by accident, however, that this space has been designed to be accessed via several paths through the site, many wheelchair-friendly: All aspects of the design work together to communicate that this is a thoughtful, welcoming place. 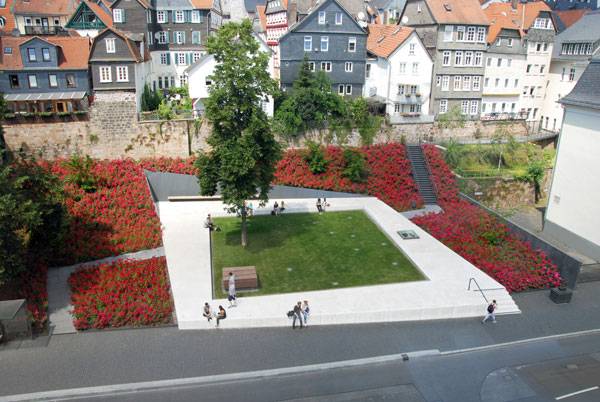 While the palette of materials is limited and austere – steel, stone, glass, and white concrete – the planting palette is restricted, but far from restrained. Densely planted red shrub roses (and a few cherry trees for spring interest) border the site on three sides, spilling their petals over the gray stone paths and angular steel retaining walls. Roses have a special significance here, since the rose was the only flower permitted to be grown within the city walls of ancient Jerusalem. 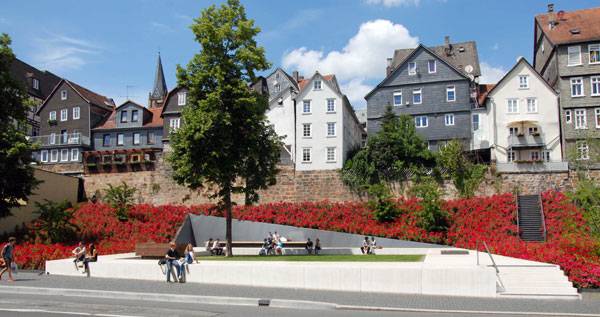 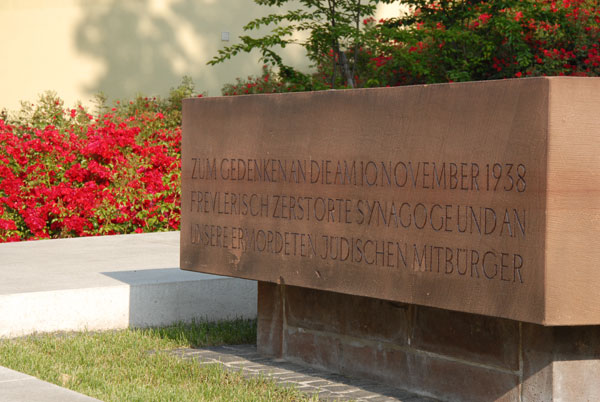 At the center of the space is an inner garden. Here, a white concrete parallelogram surrounds a slightly recessed square lawn. This is shaded by a single lime tree (Tilia x europaea, much loved in European culture), and traces the foundations of the former synagogue’s prayer hall beneath it. Narrow steps moulded into the corner of the surround lead up from street level to a glass panel embedded in the concrete. 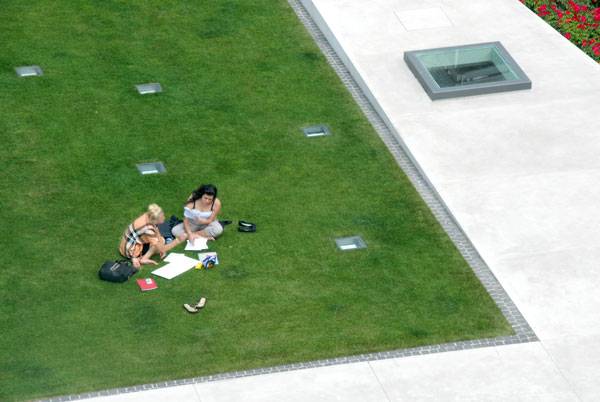 Through this panel, relics of the synagogue (including the recently excavated mikveh, or ritual bath) can be glimpsed. While nothing remains of the synagogue above ground, parts of the foundations are preserved underground. The panel is aligned on an axis pointing to the recess that formerly accommodated the Torah, thus giving special recognition to the holiest place in the destroyed synagogue. Gaps and Connections Embedded in the lawn above the former prayer hall is the memorial stone first erected on the site in 1963, along with 10 glass cases (Zettelkasten) containing memories and texts. These cases are crucial to the concept of the design: Artists Gather and Ahlborn rejected the conventional idea of another solid, fixed commemoration in stone or bronze. Instead, they wanted to start a conversation about the site, its history, and the people connected with it — a dynamic dialogue centred around the cases. These glass cases contain 10 statements relating to the site, and the texts are frequently changed in order to continually connect and communicate with visitors. 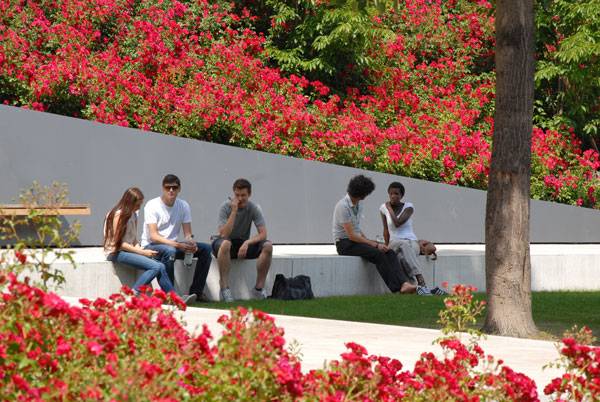 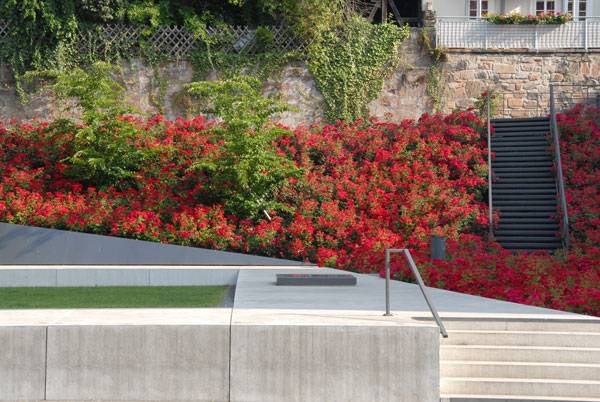 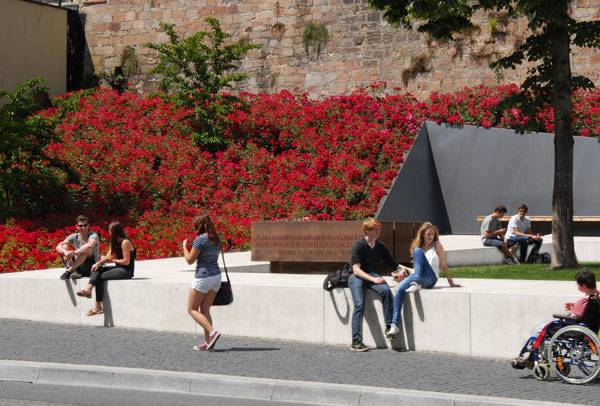 As Gather and Ahlborn commented on the project’s website, their point of departure was “thinking about the myriad gaps and gaping holes the Shoah has left behind. One of those gaps, both in a literal and a broader sense, is represented by the synagogue grounds in Universitätsstrasse and the condition of the site during the past decades, symbolizing not only the destruction of the synagogue but also the attempt to eradicate a whole culture. Its redevelopment aims at reconnecting the empty plot ‘abandoned by time’ with its urban surroundings, enabling the former vacant lot to grow into a garden of remembrance.” 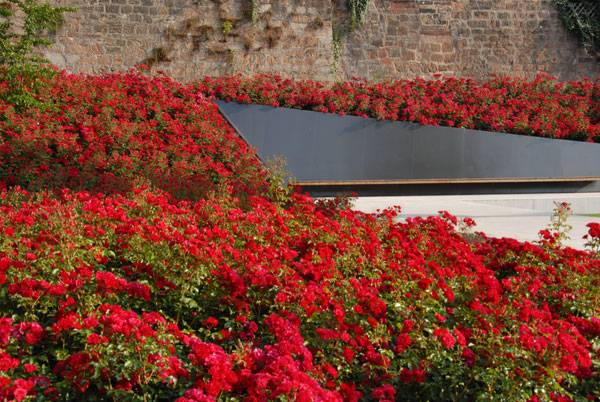 Commemoration and Communication In the subtle way that it communicates the marks left by history in the landscape, Marburg’s Garden of Remembrance has parallels with other memorial landscapes explored by Rose Buchanan in her recent article for LAN. This Garden of Remembrance is open to all, and the design succeeds in communicating this intention. Used by young and old alike, it is a powerful space that serves both as a memorial and as a channel of communication about the enduring significance of what is remembered. How important is it to integrate memorials into the current life of our communities? Go to comments 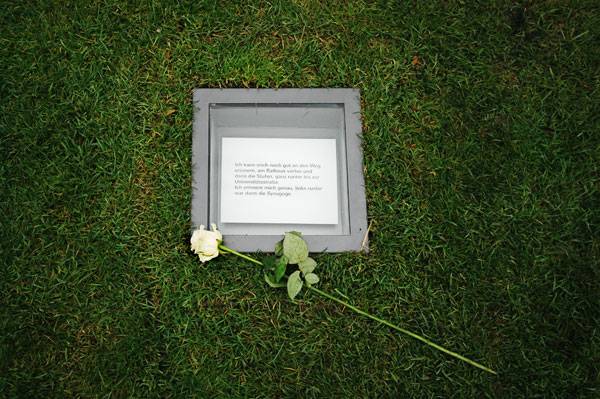 Full Project Credits For the Garden of Remembrance: