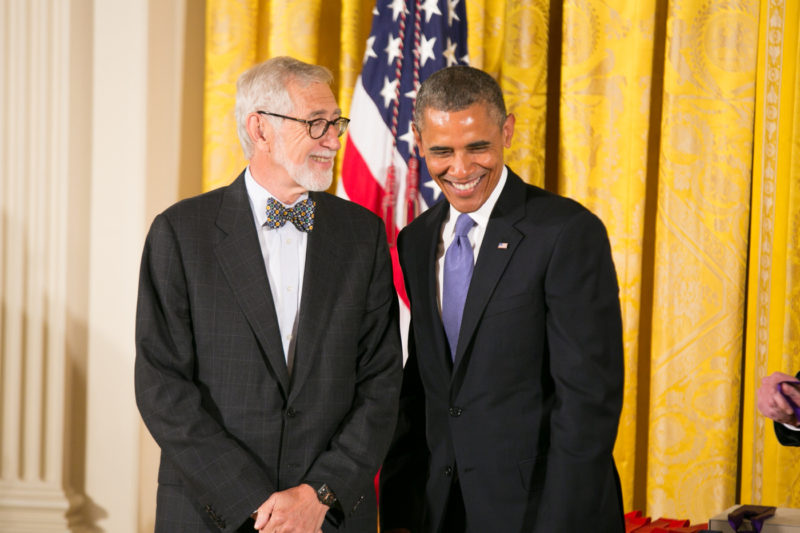 Laurie Olin was recently honored with the National Medal of the Arts. It is given each year by the National Endowment of the Arts and is the highest award given by the United States Government to artists and arts patrons for their contributions. Laurie is the fourth landscape architect to receive the medal – past honorees are, Lawrence Halprin (2002), Dan Kiley (1997), and Ian McHarg (1990).  In this interview, I spoke with Laurie about meeting Obama, receiving the award, his legacy in Landscape Architecture… and a bit about the landscapes of Star Wars.

Congratulations on winning the National Medal of Arts! How does it feel?

Thank you, it is amazing. It is kind of like being hit by lightning. You don’t expect it.  My first reaction to it was, “Really? Why me? What did I do to deserve this?” It was a surprise because it was not the sort of thing that one sets out to do; there is not a goal to get this medal in the arts. Those that have won it before are probably like me, just trying to do their work, and trying to do it well. It also seems like a bit of dumb luck and timing.  It was kind of humbling, because it means that I have to live up to this thing that they say that I’ve done!

How was it meeting the President?

Fabulous! I believe in him, he is a wonderful person. I think that he is more than a politician; he is a noble figure with a fine mind and a good spirit and shares a vision for life that I share. One of the things that was so attractive about him was his manner, he was very open and frank; he has a good mind when he is just speaking.

We saw that you two had an exchange on stage, what was it that the President said to you?

He and Michelle do a little bit of homework before these things to know a little bit about each person. When I got up on stage, he put his arm around my shoulder and whispered in my ear, “When I was a young boy, I wanted to be an architect.” And I turned to him and I said, “But, you are in a way, aren’t you?” he responded, “Ha, yeah.” It was brief and not particularly deep, but I learned later that in one of his books he talks about being interested in architecture at a young age.

Did it bother you that the President referred to you as an architect instead of a landscape architect?  Some people in our industry find it frustrating when people don’t make the distinction.

Not at all, because in the minds of the public we use ‘architect’ as a verbal adjective to describe constructive creativity, and before we had the subdivision of all the professions, they were all together as one: Design.  I started out at a school of architecture, where the emphasis was making buildings, but by the last year of school we were doing planning in communities and it all seemed to be a continuum. From designing the furniture, to the fittings, to the doors, to the roads, it all seemed inter-connected and I became less beguiled by making perfect objects. It didn’t seem to be enough, there were so many problems being presented in the world at the time, and somehow the public realm and the landscape itself as a design problem struck me as much more challenging and more important. You can add buildings to a landscape but you can’t add landscape to a building. No matter what people say, there isn’t a sauce that you can pour over a building to make it taste better! “Shrub up my building.” Landscape is a noun, not a verb. It didn’t bother me to be called an architect because in the minds of most people that means someone who makes something of value and it is corresponded to beauty. I was just glad that our profession was being identified as an art, an important art, one worth paying attention to.

I saw you met George Lucas at the event. This was not your first time meeting him, correct? What did you discuss with the movie legend?

George is a very energetic, creative and productive person. Last time I saw him I was helping him with his house in San Anselmo, California. He wanted to put in a tennis court, but there was a steep site with a bit of a ravine and a relic stream and I was trying to explain my process for locating the court, and he was frustrated with what I was doing. So one afternoon we sat at his kitchen table and he made me show him how grading works. We sat there with a scale and I basically taught him how to grade. The builder took over the project after that and I have not really seen him since then. When I saw him again at the ceremony I said to him, “Hi George, how did everything work out in San Anselmo? I remember that you kind of wanted to do the project yourself.” And he said, “Oh yeah, I’m like that. That is one of my problems on ALL my projects.”

Have you seen Star Wars? The planets in those movies have such iconic landscapes. Have any favorites?

Who hasn’t seen Star Wars! I don’t have a favorite one, but in the first one, it opens with a broken down ranch on a dusty planet (Tatooine), and it reminded me of a western film.  The thing that was so beguiling about that first scene was not only how it was a takeoff on an old western movie but that it had a view of the future and an air of a world that you could believe in. The little beat down rocket ship was like a broken down pickup truck on a farm. That first landscape is shown and these other planets come up, I thought those are wonderful scenes and very brilliantly done. There was the great scene, in ‘Empire Strikes Back’, of the battle in the snow and the ice, and that landscape reminded me of my home state of Alaska. Then there were the scenes with the Ewoks and their village, which reminded me of Muir Woods. I think later when he began using more and more animation; the films were not as dynamic. Those early films were really wonderful. Most of us are best in our early work. When you’re younger, you put so much of your life into your work, so much energy, you are up all night. Whereas later in life, you don’t have as much energy and you need others to help you.

How do you feel about having such a prominent role in the legacy of landscape architecture?

It is really odd. The three other landscape architects that have won this award are heroes of mine. Ian McHarg was my Chair at Penn, who inspired me and helped my generation pursue ecological design, planning, and a belief that there is something about human ecology that needs attention as well. Ian was a hero, but then he became a close personal friend.

Dan Kiley I had admired since I was at Harvard. I invited Dan to come teach and we became friends. I was able to work with him later on a project with Richard Meier’s office that never came to pass.  It was a wonderful experience and we had great ideas, but sometimes even projects with great ideas don’t work out. Then Harry Cobb called me one day and asked if we would work with him on a project in Dallas, and I had to turn him down because the office was too busy. He asked for a referral and I sent him to Dan; that project became Fountain Place.  A few of the partners in the office were upset with me for giving away a project like that. You know, we’ve had plenty of good jobs. You can’t do everything, and you shouldn’t try, you should share because this profession is a lot of fun.

Then there was Larry Halprin, who was as close as being a god as there was. He was a brilliant designer, who had a great vision of landscape and cities, and working with what began as inexpensive materials on some monumental projects and he changed urban design in cities. I don’t use the word lightly, but he was a genius, all three of those men were geniuses. So, I don’t think I am in the same league, but it was nice for others to make that mistake. One of the things about it was they were unrelenting in their views about their work.

I think your award is obviously the kind of recognition that we all dream of, but it also showcases the profession in a much needed light. What do you think we can do as landscape architects to gain more recognition?

Part of what I did when I was your age, was invent things that I thought were important and went out and pushed them. It was like when John Collins decided that there should be a park along the Schuylkill River here in Philadelphia. He worked on that off and on for 15-20 years, and now we have it. If he had not thought it up, it would not be here today. He kept fighting and putting it out there, and it wasn’t successful for a long time.  With the media today, the internet, the social networking, I would say that landscape architects have a great opportunity to get their ideas out there. Ideas have a life of their own, you put out a good idea and sooner or later it happens. I often joke that having a good idea too soon is like having a bad idea, sometimes people will say no, but sometimes another generation will see it as a good idea. This business of how are we living in cities and what the parts should be. People don’t like ugly places, they don’t take care of them, and they leave them whenever they can. So if we strive to make something that is beautiful, rewarding and healthy, then that makes a difference to people. To young professionals, I would say don’t lose track of your ideas, hang onto those things that mean something to you, and derive strength from them and share them.

Lead image: Image courtesy of the National Endowment for the Arts