Close your eyes and think “surfing”. What picture do you see in your head? You might imagine blue ocean, crushing waves, and white strips of sand. Possibly some palms, maybe also a group of tanned, handsome men and beautiful women, all looking like actors from Baywatch. But would you ever think of a leafy old park on the banks of an icy cold river in the middle of a bustling German city? Do you see it as an urban sport, a typically large city activity? Probably not — so read on! This article might completely change your views on surfing! 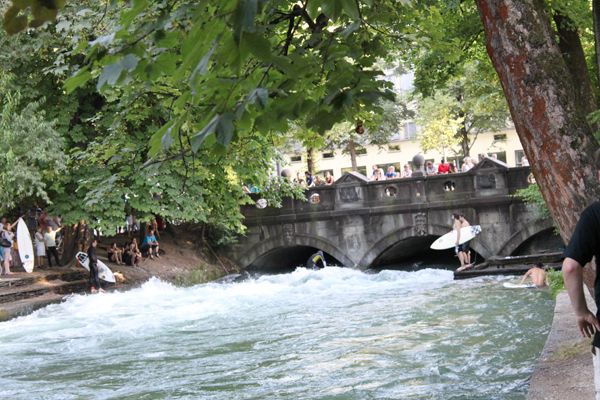 Thinking of visiting Germany? If you ever happen to visit Munich and grow tired of the numerous museums and monuments, you should venture to one of the city’s nicest and largest green areas — the Englischer Gartens. As you walk toward its southern part, you might encounter people dressed in wetsuits or colorful bermuda shorts, carrying full-sized surfboards. If you happen to be a curious person, follow them into the park. You will witness the most unusual scene: a group of men and women of all ages, patiently waiting their turn to surf on the waves of the rough river below! 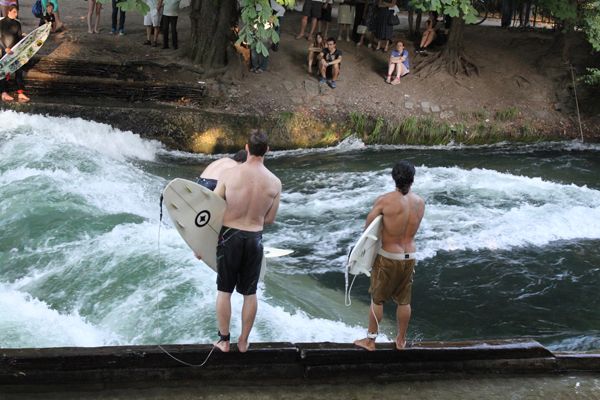 Attracting people for more than 30 years The “standing wave” on river Eisbach has attracted surfers for more than 30 years. It is an amazing solution for surfing fans who live too far from the ocean to make frequent visits possible. The Munich wave is by no means meant for beginners; it is about 1 meter high and 12 meters wide, with a flow velocity of approximately 5 meters per second. The flow — breaking rocks in the river bed — can also be deadly for an inexperienced surfer. The resident surfers might even ask the novice to leave — any serious injury could result in the spot being destroyed. Although people have been surfing here since 1972, they could only legally do so since 2010. A new sign is warning newbies: “Due to the forceful current, the wave is suitable for skilled and experienced surfers only”. 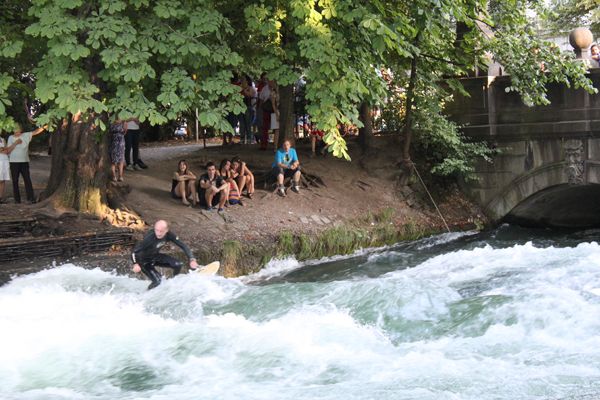 Local wisdom The wave, formed by water gushing from under the bridge into the channel, used to be much more capricious, sometimes even disappearing for periods of time. Then, the surfers discovered that it could be stabilized by placing some wooden planks, concrete bollards, and a system of ropes, pulleys, and stopper planks in carefully selected spots and operated by the surfers themselves. The Eisbach wave is extremely popular; there is always a queue of surfers waiting their turn to put their bodies in the icy water. The surfers do not disappear even in the winter. Competitions are held, and some Munich-trained surfers became internationally known professionals. 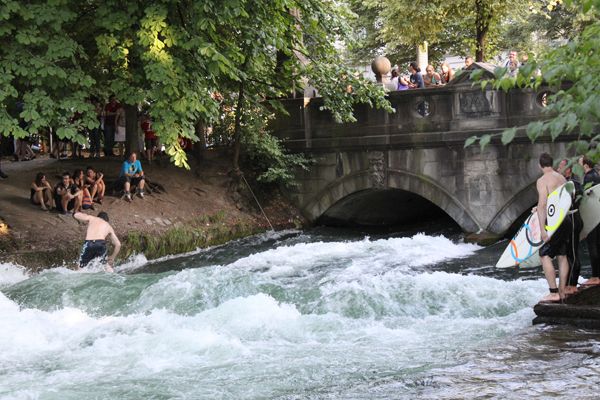 Honestly do you have the guts to do this; credit: Marta Ratajszczak

This standing wave is not the only one in Europe. There are others not only in Germany, but also in Austria and Norway. Does it mean that river surfing is becoming a popular choice of sport for urban dwellers? I do not think its time has come yet. However, it certainly is an amazing experience to see real surfers in the middle of a city. It is a great tourist attraction and, most importantly, it is truly a wonderful addition to the cityscape! Article written by Marta Ratajszczak Featured image credit: Marta Ratajszczak Published in Blog