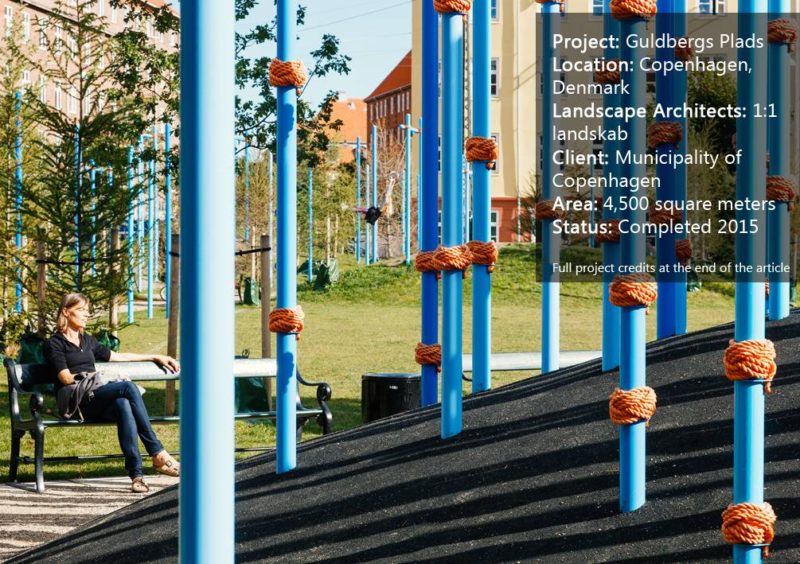 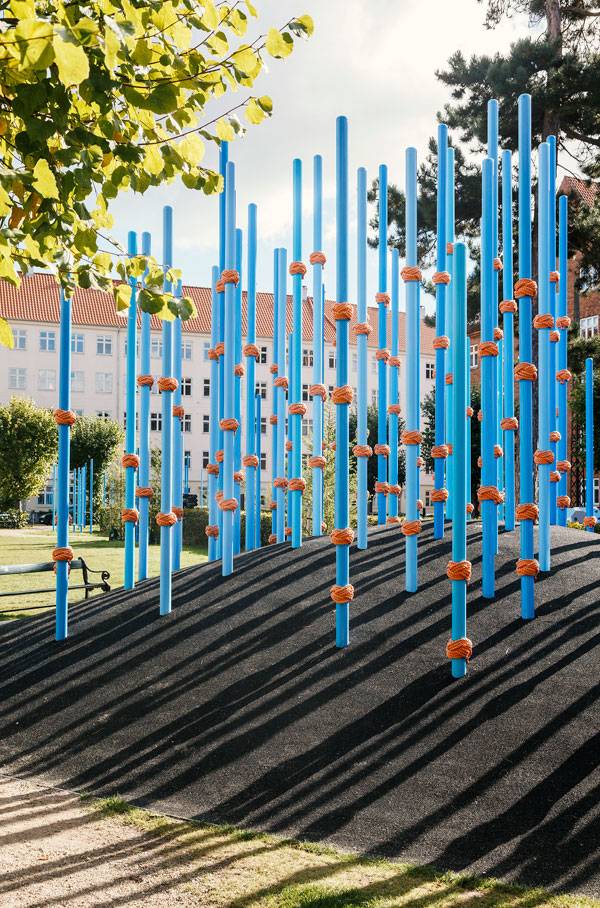 What Does it Mean When We Say a Landscape Design is Flexible?

As landscape designers or clients, we normally have a set of multiple site requirements that needs to be met. It can get overwhelming to sort out the high input of information. However, the principle of a good design need not be complicated; it can be practical, people friendly, and — here is the last point that most of us can forget — fun. A design language that meets these criteria and ultimately creates this flexibility within a landscape design concentrates its utmost importance on this one question: How can we create multiple functions from one or two elements? In this instance, for 1:1 Landskab, it is about picking three bold elements and actually sticking to them. 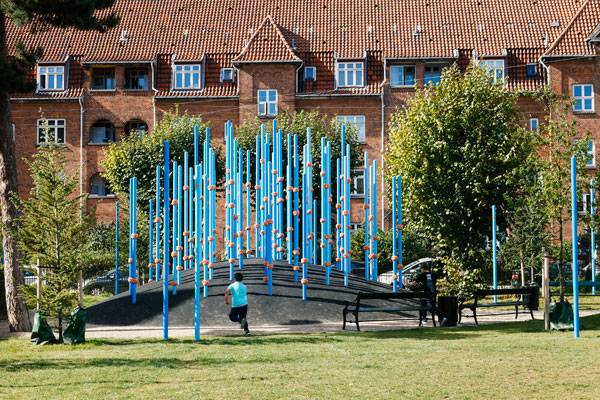 An Urban Forest in the Hub of a Cultural City

Guldbergs Plads resides in Nørrebro, a trendy and cultural neighborhood that is also home to the famous Superkilen  project. Fittingly, the design creates a surreal “urban forest” using 75 Larch trees and 200 blue poles, making up two out of the three elements that shape the overall design. In the busy cityscape, away from nature, the change from the conifers reconnects the urbanites to the natural cycle of the seasons. Leaves change from green in spring to yellow in autumn, then drop from the trees to expose long skeletal silhouettes in winter. 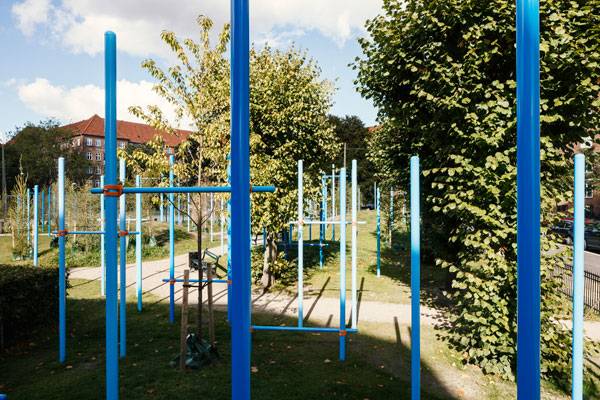 Why Here, Why Now?

The area was pedestrianized in 2010 and, together with the surrounding buildings, creates a safe urban space that acts as a town square, public playground, and schoolyard. With these three functions in mind came a much-needed facelift to revitalize the area as an activity park — a meeting place that focuses on exercise in the cityscape. The designers sought input from the people, working with local residents to identify the sporting equipment needs. This also allowed those new to exercise to give their input in the first phase of the design development and to explore for themselves what could be implemented to improve their lifestyle. The result? Guldbergs Plads is a space fit for both the young and the old. 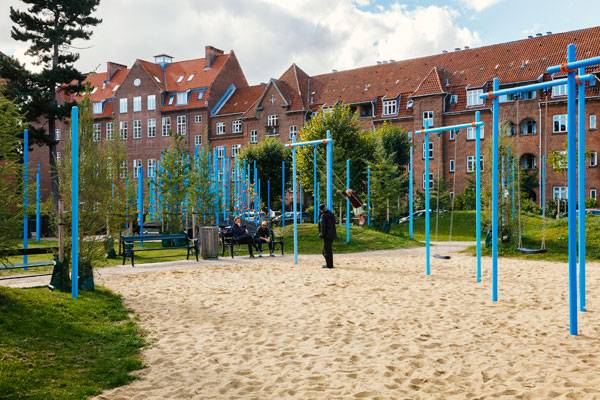 The last design element that has been repeated throughout the site is the 10 hills, which are reminiscent of mountainous landscapes. Some are made out of the rubbery play surface upon which the blue poles are scattered, while others are covered with meadow plantings. This is another aesthetic layer that can reconnect users back to nature. The mixture of the horizontal rolling hills and the vertical blue poles creates a modern urban forest that befits the trendy neighborhood. 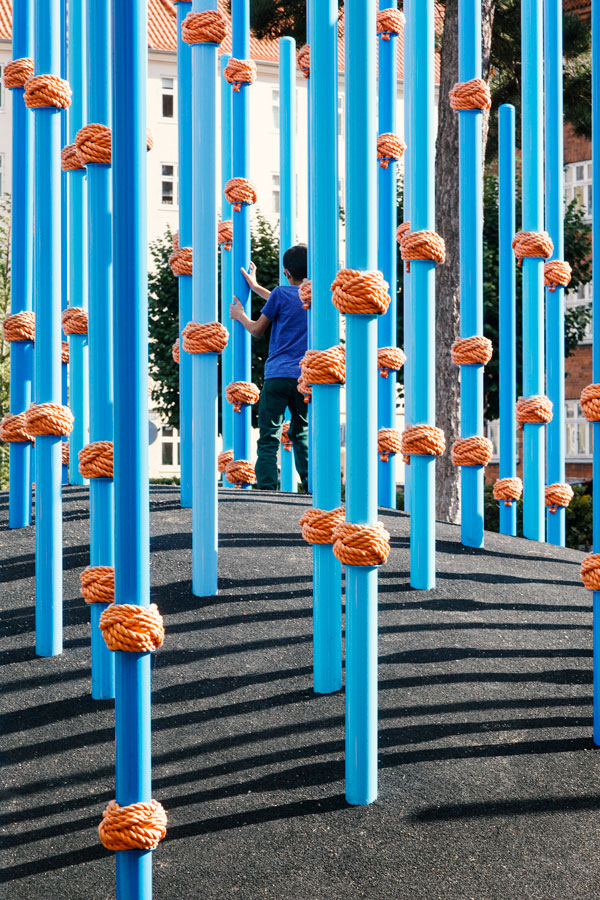 Which Element Offers the Most Fundamental Functional Framework?

The previously mentioned three design elements include the blue poles, the hills, and the conifers. The hills provide a protective play area and a sense of adventure. The Larch trees add to the realistic concept of the forest with its natural seasonal change. But it is the poles that provide the framework for the functionality and future flexibility of this space. The use of the complementary blue poles and tied orange knots really gives people a sense of entering a unique space. The designers’ confidence in using this bold approach works. 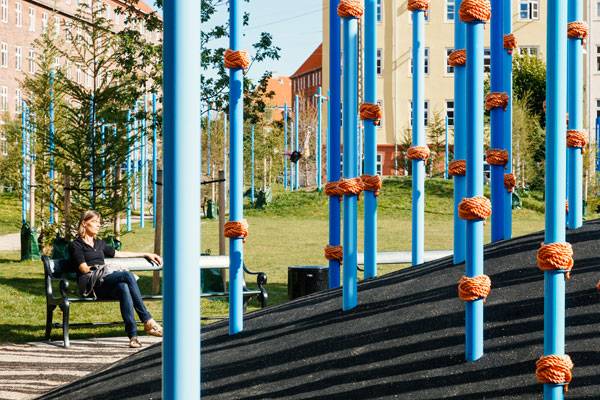 It is out of these poles that subsequent features start to arise, such as six big swings that rhythmically sway side by side and beams placed at different heights. Other complementary features include a 3D climbing labyrinth on top of a big rubbery hill and a series of gymnastic rings. The exciting part is how users can customize other blue poles for organized or impulsive activities such as hanging up their own hammock, lining the poles with strings of lights for a neighborhood party, or creating a clothesline for a flea market. The functional and creative opportunities are endless! 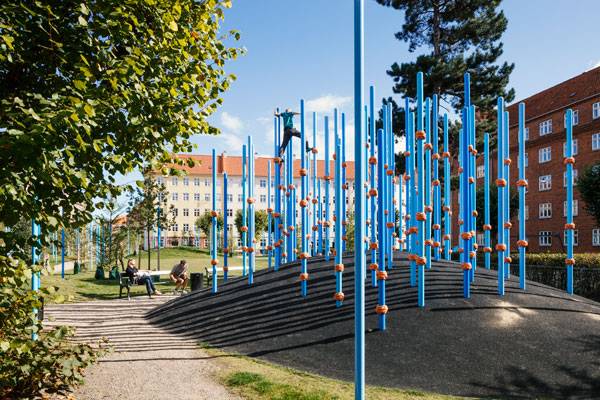 Why is this project so successful? It works because it’s actually fun. Endless possibilities arise when we are given the choice to customize and play with the space to our own liking. Neighborhood residents and passersby can relax, tumble, explore, interact, swing, and climb in this space. It also works well as a place to hold a gathering or celebration. The flexibility of a landscape design can be analyzed by looking at the number of activities, big and small, taking place on the site. It would surely be interesting to follow the outcome of this project.  Thanks to 1:1 landskab, Guldbergs Plads has been transformed into a place where landscape design meets flexibility and where users become the designers who can constantly make this place flourish. 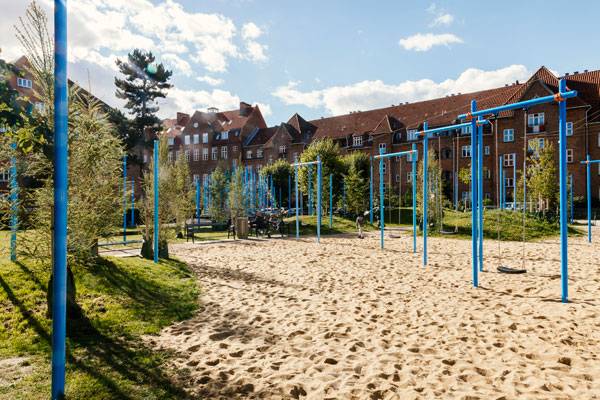