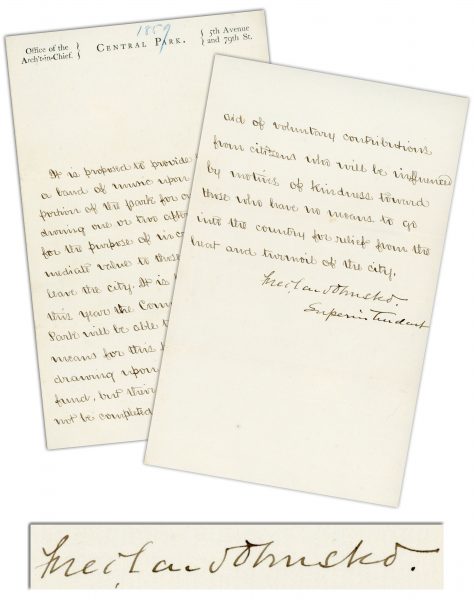 Frederick Law Olmsted is known as the “father of landscape architecture.” His most famous work is his co-design of Central Park in New York City, which was established in 1857.

The following letter was written while Olmsted was Superintendent of Central Park and was managing the construction of the open space he designed. The letter requests volunteer participation from a local musician to help draw the public to the city’s most famous green space. In the letter, Olmsted describes his social perception, tremendous commitment to egalitarian ideals, and how these beliefs translate to his obligation to provide managed open space for passive recreation and enjoyment, particularly for those who do not have the means to leave the city environment.

Olmsted famously advocated that “common green space” must always be available to everyone and was to be defended against private encroachment. These principles are now considered fundamental to the idea of a “public park,” but was considered groundbreaking thinking in 1859.

Olmsted’s 1859 letter was composed on Central Park stationery and was embossed “Office of the Arch’t in Chief / CENTRAL PARK / 5th Avenue and 79th St.” and reads:

“It is proposed to provide by subscription a band of music upon the finished portion of the park for a few hours during one or two afternoons a week, for the purpose of increasing its immediate value to those who cannot leave the city. It is believed that after this year the Commissioners of the Park will be able to furnish the means for this purpose without drawing upon their construction fund, but their arrangements cannot be completed at present without the aid of voluntary contributions from citizens who will be influenced by motives of kindness toward those who have no means to go into the country for relief from the heat and turmoil of the city. [Signed] Fred. Law Olmsted. / Superintendent.”

The handwritten letter will be auctioned by Nate D. Sanders Auctions on December 13, 2018. Bidding for Olmsted’s letter begins at $35,000. 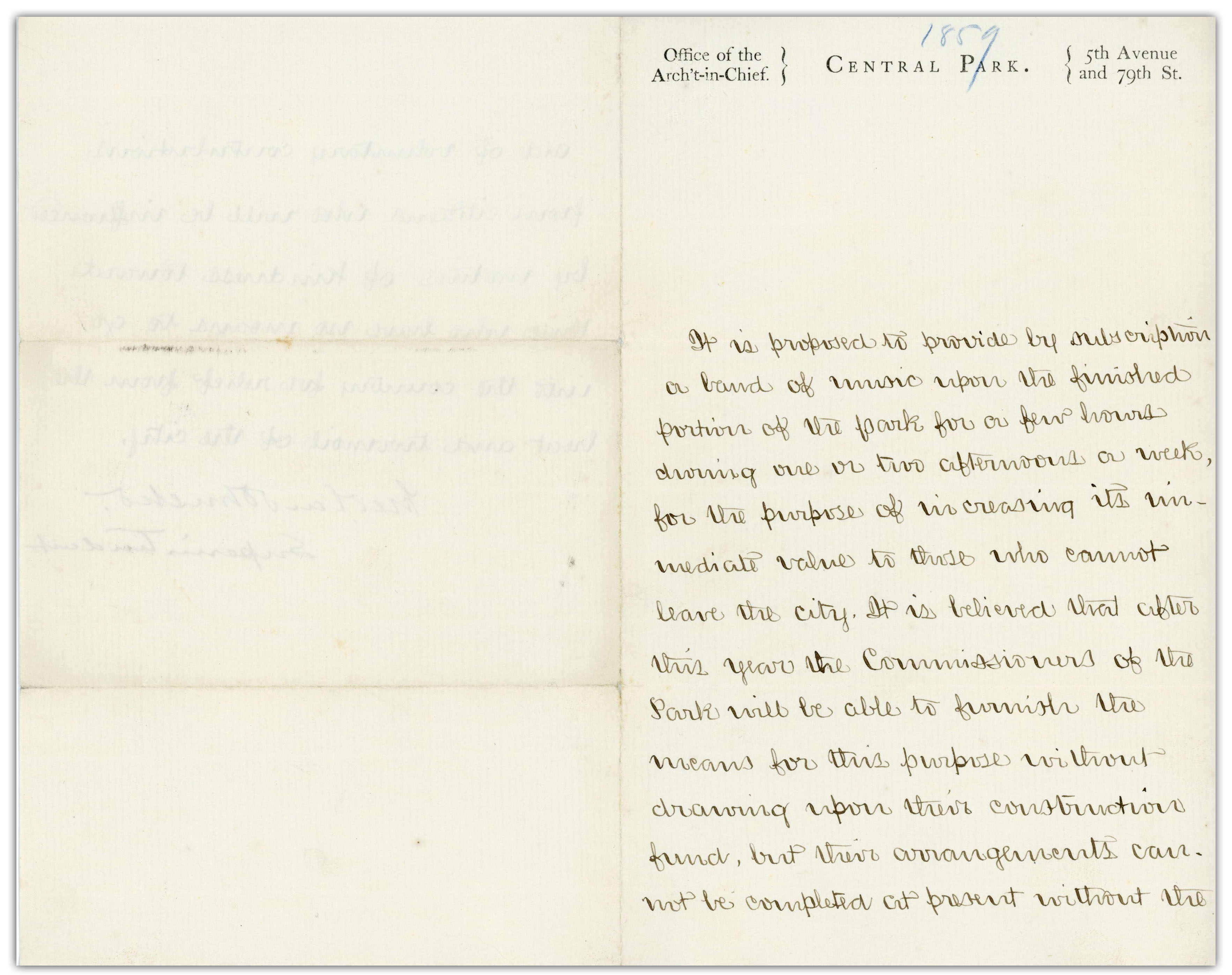 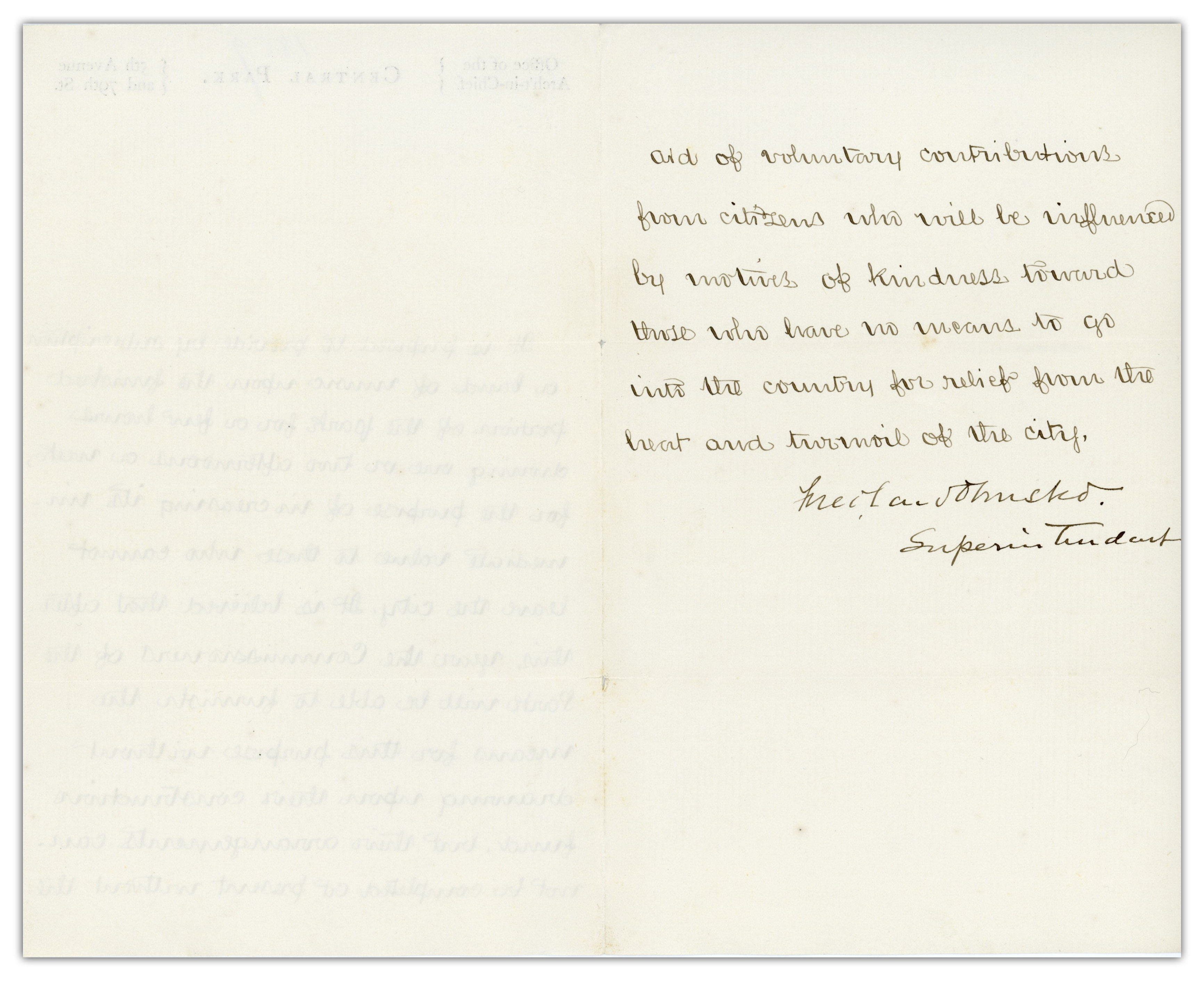