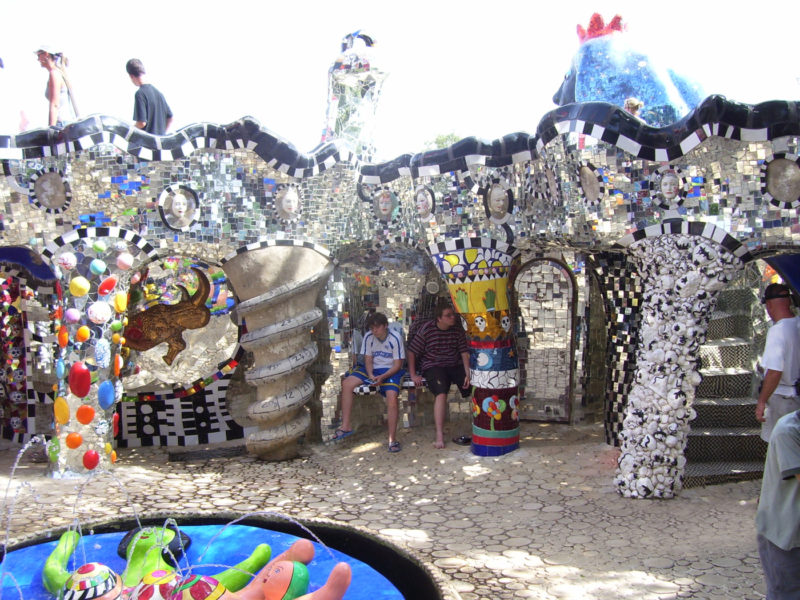 When most people think of Italy, their first thoughts are of the Colosseum, the Vatican, or Venice’s Grand Canal. Not many imagine a colorful, imaginative, unique sculpture garden tucked away in Tuscany.

My first impression upon arriving was just WOW! This was not like the typical gardens I had been visiting all summer. I was engulfed with bright colors, intricate mosaic work, and enormous sculptures. The winding paths kept me intrigued as to what might be around the next corner. I was in Niki de Saint Phalle’s dream!

The Giardino dei Tarocchi (Tarot Card Garden) is about 2 hours north of Rome. Being based on Tarot Cards, this isn’t your typical Italian garden. The designer, Niki de Saint Phalle started the layout and design of the garden in 1978 and opened it to the public in 1998. De Saint Phalle was a French sculptor best known for her large, voluptuous, and colorful statues exhibited all over the world.  She worked and lived on the site of the Tarot Card Garden until her until her death in 2002. 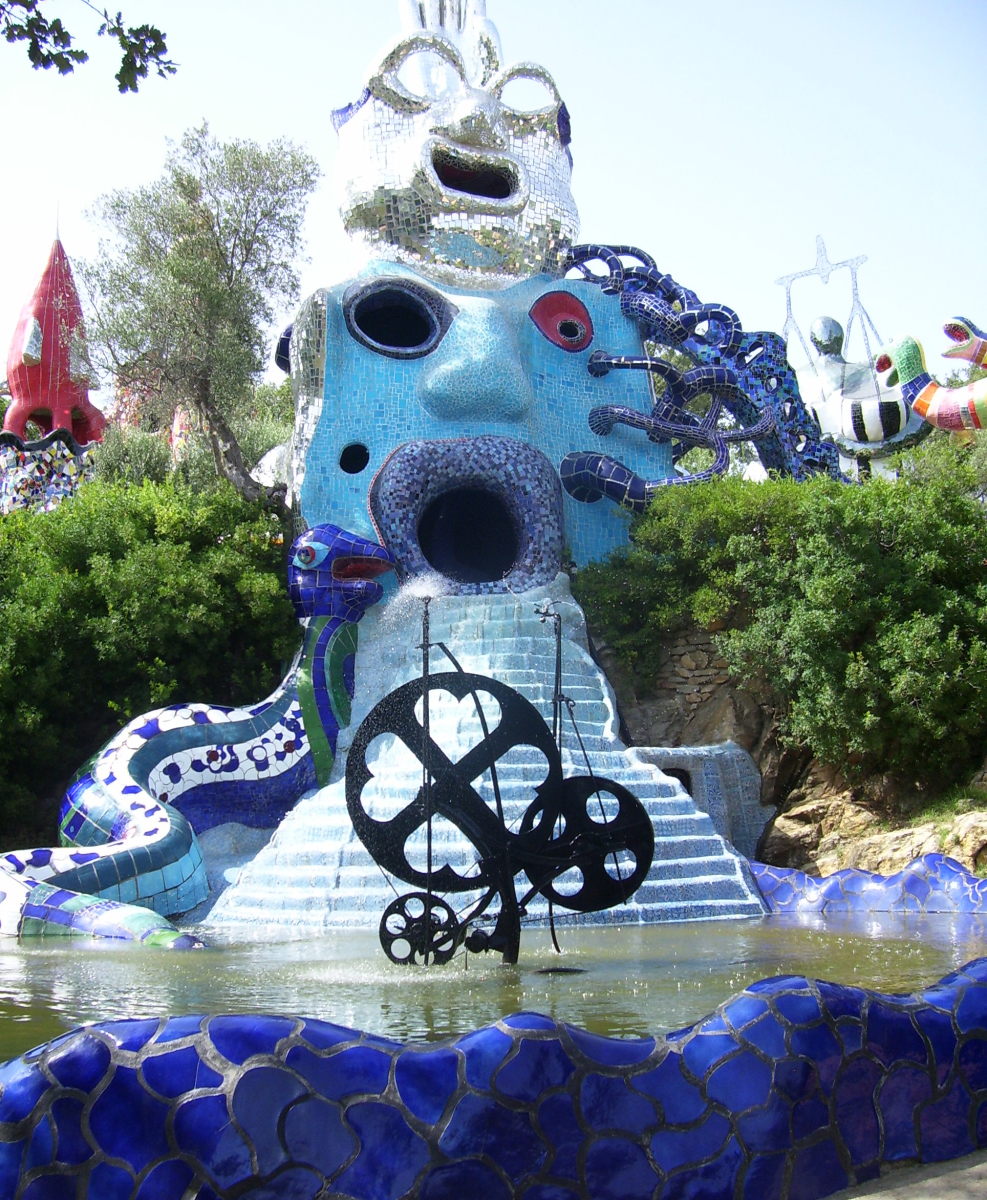 One of the first sculptures to capture your attention is based on the High Priestess Card. This work represents feminine intuition, which, according to the tarot, is one of the ‘keys’ to wisdom. On top of the High Priestess is the Magician. According to de Saint Phalle’s website, “The magician is the card of God the creator of the universe. It is he that created the marvelous joke of our paradoxical world. It is the card of active intelligence, pure light, pure energy, mischief and creation” (http://www.nikidesaintphalle.com/). 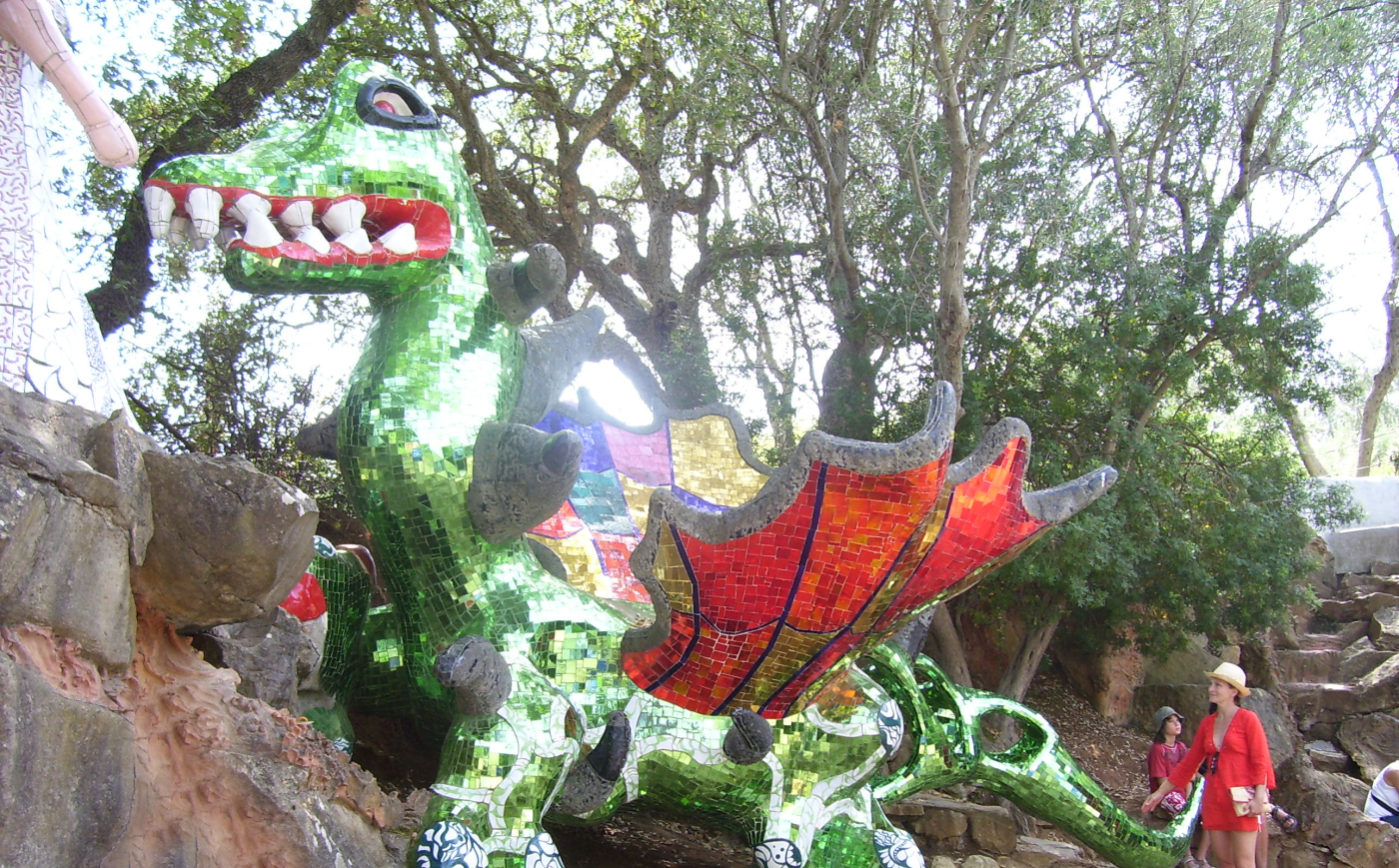 The Strength Card is represented by a young maiden and a dragon. Here, the maiden must tame the monster that is inside herself, her inner demons. 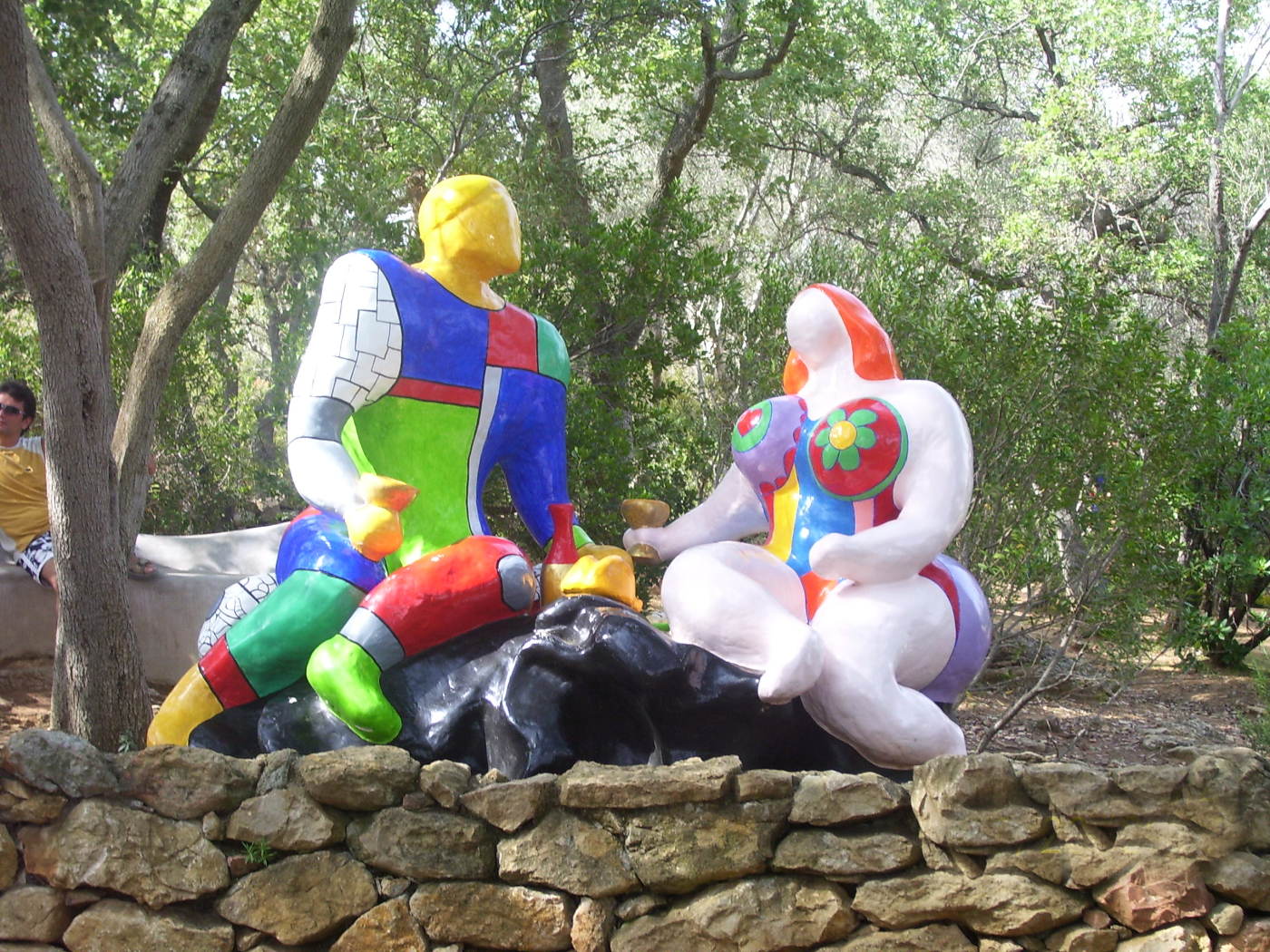 A favorite of many women is the Lovers Card. Here, de Saint Phalle chose to call it The Choice Card. She believed there is a wrong and right choice. Who better to represent that than the first couple to make a choice, Adam and Eve. 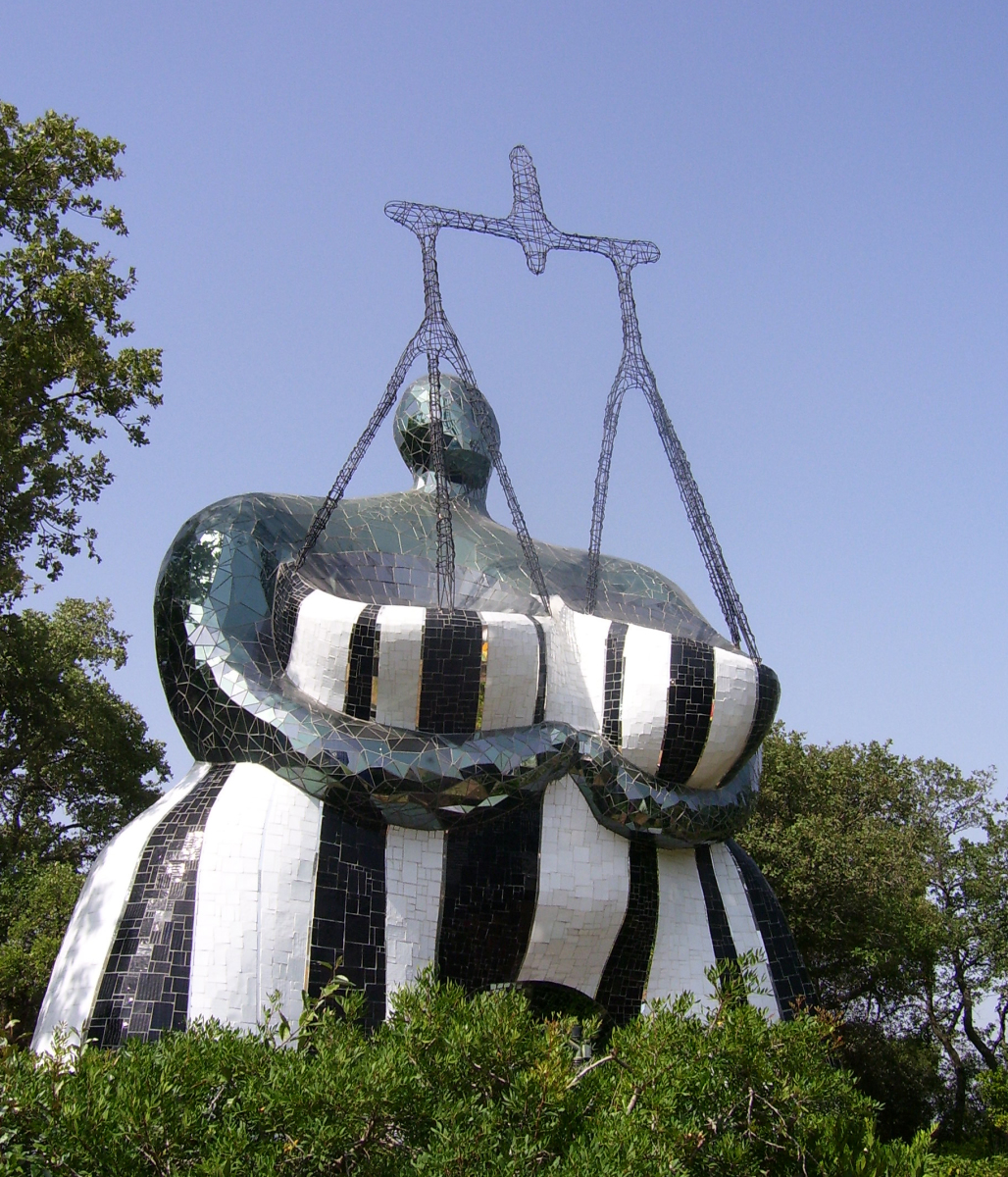 One of the most eye-catching sculptures is the Justice Card. This represents the idea that you must look at yourself and realize that you have a dark side. Upon this realization you will have the capability to judge with compassion. De Saint Phalle writes, “Real justice is not blind, it brings a vision of universality” (http://www.nikidesaintphalle.com/).

These are just a few of the 21 cards she created. De Saint Phalle’s style is clearly influenced by the architect Antonio Gaudi. She first witnessed his work in 1955. She visited Gaudi’s Park Guell in Barcelona and fell in love with the curves, bright colors, and unusual shapes and sculptures. Notable in de Saint Phalle’s work is the use of full figured women in the sculptures. Even in the small details, like this fleur-de-lis, a voluptuous woman’s figure appears. 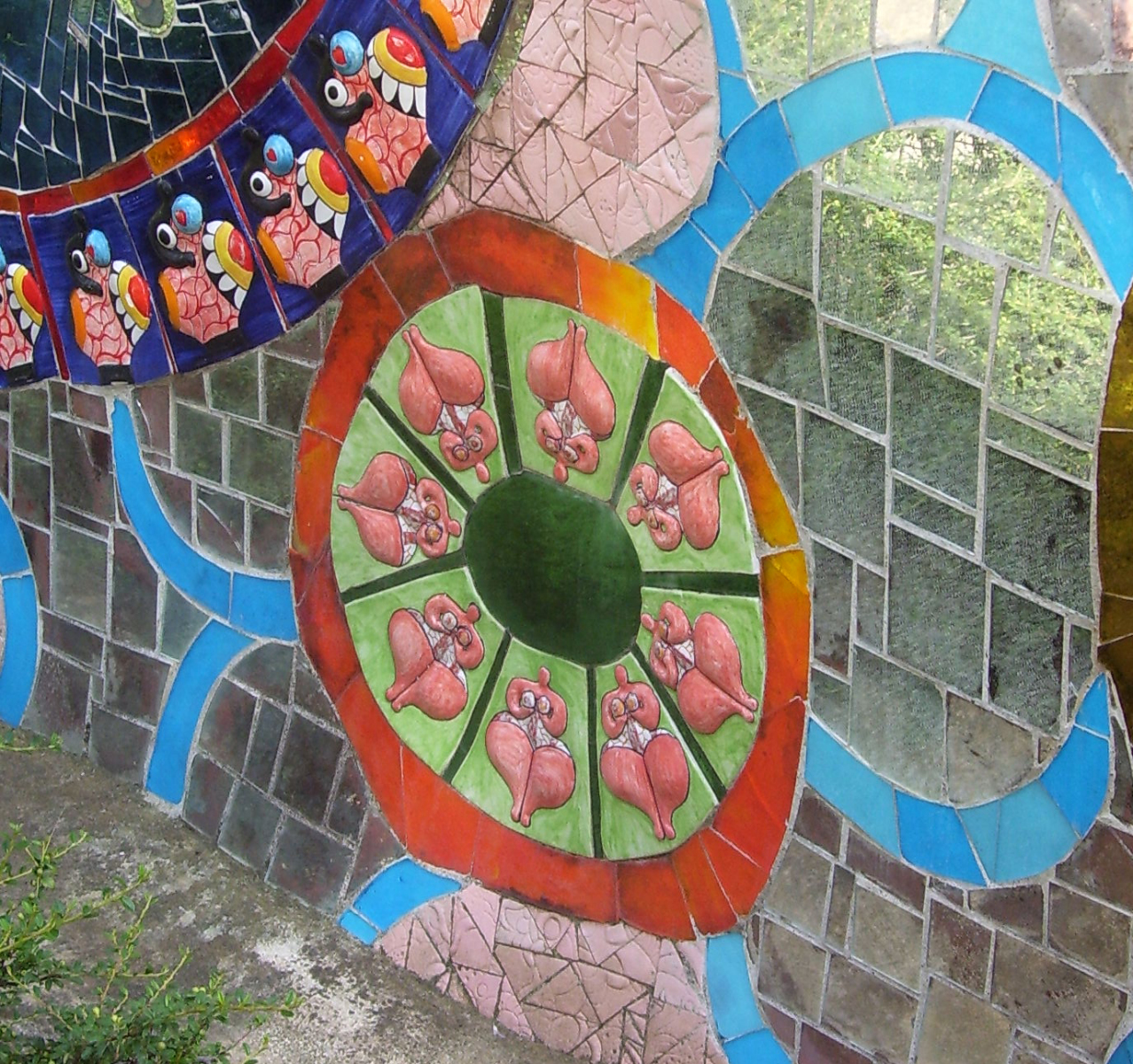 She first started the full figured women sculptures, which she calls Nanas, in the 1960’s. They are brightly painted, voluptuous, and connected with the women’s movement of the time. With the creation of the Nanas came her motto, ‘Power to the Nanas!’ They soon became the icon of female strength and empowerment (http://www.fembio.org).

Each sculpture at the Tarot Card Garden was made by hand–nothing was manufactured. Every one of the tiles in each and every mosaic was chiseled and attached by hand.

There is no way to put into words the dreamlike shapes or the energy in this garden. This garden is a place for everyone to enjoy, whether you want to try to find a deeper meaning to life through these enormous, expressive Tarot Cards or simply to enjoy the whimsical sculptures.

-All Photos By: Shavawn Coleman. All rights reserved.