The recent protests in Taksim Square, Istanbul, and those in Tahrir Square, Cairo, have once again highlighted the power of public space as a tool of protest. The use of public space has always been employed as a way to reflect the economic and socio-political mood. Yet, public space is a fragile thing. The London Occupy Movement highlighted that our public space may not be as public as we think, when protesters were prevented from entering Paternoster Square by a high court injunction taken out by the owners. Public space is important because it is supposed to be just that. Public. For you and me, and the person sitting next to you. It represents our rights, and in all the above cases the right to political protest. The architectural emblem of a society in all its guises — economics, politics, protest, food, fun, and enjoyment and at the same time, the arena for all these constructs is, the public square. In what will culminate as Landscape Architects Network’s Top 100 public squares, we kick off with a general Top 10 Public Squares of the World… 10.  Tahrir Square, Cairo, Egypt 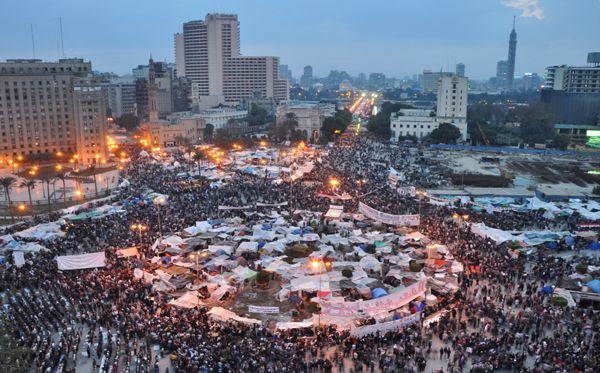 “Creative Commons Tahrir_Square” by Jonathan Rashad is licensed under CC BY 2.0

The square unites four main streets and is surrounded by various Egyptian political and cultural institutions (the burnt out NDP headquarters included). Huge underground viaducts provide pedestrian accesses. Overall, a traffic dominated square perhaps, but the recent images illustrate it filled to the brim with the people of Cairo, suggests its power as a site of solidarity and tool for protest. 9. Times Square, New York, USA

Times Square is the world’s most buzzing square in the city that never sleeps. The constant stimuli make it an absolute “eyegasm” and complete sensory overload, but it’s an incredible experience! 8.  Plaza de Armas, Cuzco, Peru 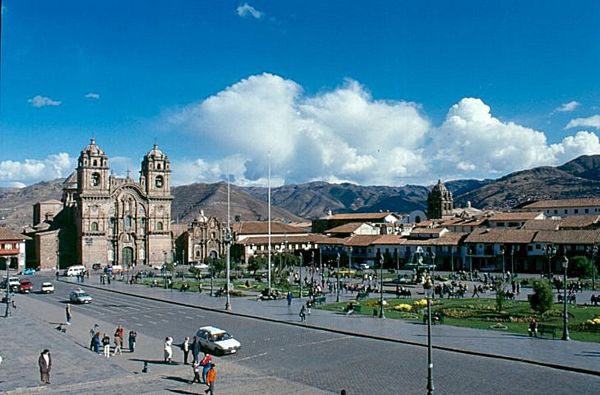 As the center of the ancient Inca capital, the plaza is richly layered with history.  From its foundation to the Spanish arcades that surround the square and the more modern formal layout, the square, with its hard and soft landscape, acts as a healthy, beating heart to the city. 7.  Rynek Główny, Kraków, Poland

Voted the world’s best square by Project for Public Spaces in 2005, the Main Square in Krakow certainly has its virtues. It is accessible to pedestrians from 13 different points and one of the best car-free squares in Europe, as it is generally only accessible via foot. 6. Federation Square, Melbourne, Australia 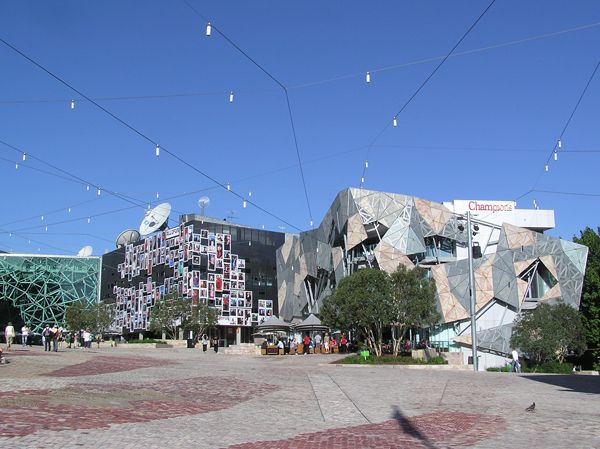 “Creative Commons Federation Square, Melbourne” by Donaldytong is licensed under CC BY 3.0

This modern square was opened in 2002 to much controversy. Often voted one of the ugliest places due to the deconstructivist style of the buildings, the square has come to be very successful. Why so? Well, with a constant stream of entertainment, dining and free Wi-Fi, it’s always busy with people. 5. St Peter’s Square, (Piazza San Pietro), Vatican City 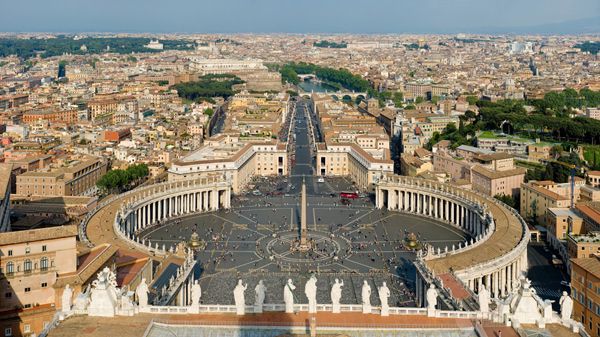 Is there a square anywhere else in the world as impressive as Bernini’s masterpiece? Baroque grandeur at its best. St. Peter’s Square is a plaza of huge proportions located directly in front of St. Peter’s Basilica in the Vatican City, the papal enclave surrounded by Rome, directly west of the neighbourhood or rione of Borgo. An old Egyptian obelisk sits at the centre of the square dating back four thousand years, which was erected at the current site in 1568. Gian Lorenzo Bernini designed the square almost 100 years later, as well as including the massive Tuscan colonnades, four columns deep, which embrace visitors in “the maternal arms of Mother Church.” 4. Trafalgar Square, London, United Kingdom 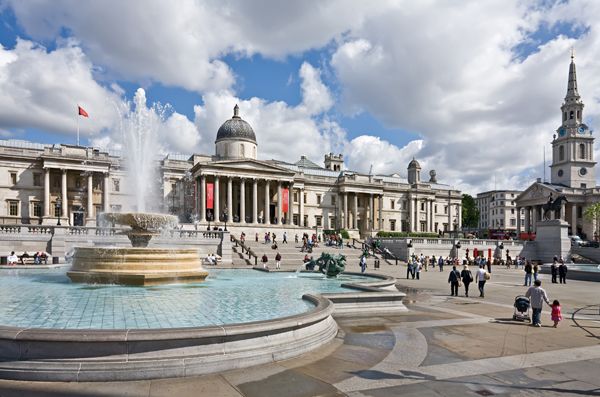 The square in London. Since its inception by the great British architect John Nash, the square has been a source of pride for all Brits. Moreover, it is a constant stage of art, culture, and other events. Related Articles: 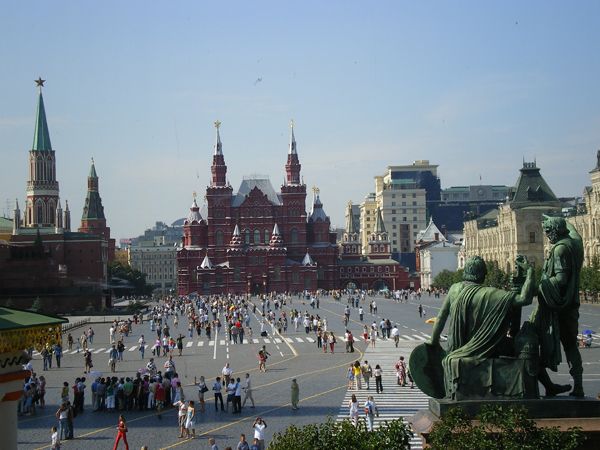 “Creative Commons Red square, Russia” by Raul P is licensed under CC BY 3.0

Surrounded by significant buildings – St Basils, the Kremlin, Lenin’s mausoleum, Red Square is a wonder to behold. It is often considered not just the central square of Moscow, but all of Russia as the city’s major streets, which connect to Russia’s major highways, originate from Red Square. 2. Piazza del Campo, Siena, Italy 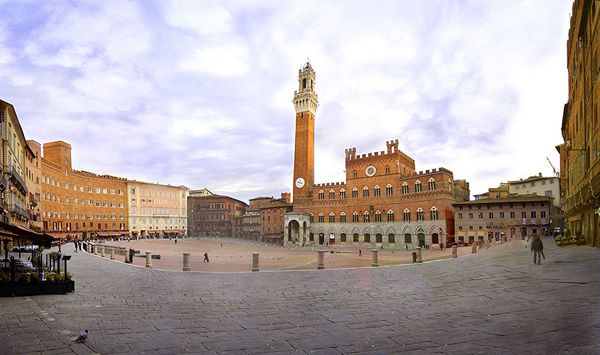 A Tuscan red, shell-shaped piazza that hosts a horse raise – the Palio di Siena – twice a year. What’s not to love? The ingenuity of the medieval square, the cultural buildings around its perimeter, warm colors, and rich textures make the square, always filled with people, one of the best experiences of public space in the world! 1. Naghsh-e Jahaan Square, Isfahan, Iran 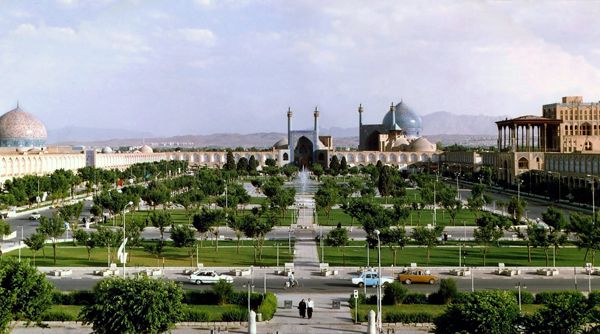 One of the world’s most beautiful squares, with a wonderful area of luscious green in the middle. Lined with shops, filled with cafes, with the great Shah Mosque to the north this square will leave you breathless. Its other name Naqah-e Jahan Square means ‘Image of the World Square’. The public square is a place for enjoyment, but recent global events have highlighted the very important symbolic nature of our public places. Public space is the realm where the theory of politics, economics, and society collide with the reality of politics, economics, and society. As landscape architects, we — alongside our collaborators — must remember this. “We are in the business of placemaking” is a popular phrase. We are, we can be, so much more than that — places are for people. We serve society. Recommended Reading: