A few weeks ago I posted a blog asking for critiques on some 3D models components I had made.  I posted it on IGN, WordPress, and Land8Lounge.  The response was fairly low, and I tried posting it as a discussion thread on Land8Lounge as well.  This got some helpful comments, but it also possibly inspired a thread that brought up the issue of rendering VS. design in Landscape Architecture.  This question came up a few weeks ago at a networking event for NYC landscape architects, and I talked to a few different people about it.  It made me wonder: Why is it that designers often have a negative reaction to “high end” renderings?

If I said I had never seen a rendering and assumed that the graphic quality was hiding something I would be lying.  I think this often comes from past experience, either in firms as CAD monkeys, or in school.  We, I think, have all had a presentation where we worked our ass off to the last minute perfecting a design, leaving little time to get perfect graphics, so we go out with what we can, trusting our peers and other trained professionals to see through the pencils lines to the heart of the design beneath, only to be disappointed.  We have also all had the time when we have seen the person slap together a half-assed design, but with pretty pictures, and when we are counting on our bosses and teachers to see it, they instead get “blinded” by the crisp lines, hypnotized by the texture work, and in a trance from the shadow quality.  I think it’s this shared experience that leads so many of us to distrust pretty drawings: we all know just how easy it is to lie with graphics.  Whether it is drawing a plan that doesn’t show steps because they client didn’t want them – even though it’s not physically possible, screwing with perspective sizes, or hiding views that you don’t want noticed.  We know the tricks all too well; in part because we use them to some extent ourselves.

We choose a rendering style based on what we want to show and not show: Computer graphics traditionally show a Utopian version of everything – where it all looks fresh from vacuum -packaging, but it makes the space look more contemporary to clients; Hand graphics hide views by simply not drawing the far background, but show more flow and life in the space.  We choose views that may not show the space in the best ways, but show a feature we want to emphasize over others.  It’s a limit of non-physical models – you have a finite window onto the world, you are going to be careful about what you choose to show to show off what you want to be seen.  The problem is, we need a way to easily communicate to clients, and in forms other than physical models, and clients who have not been trained as designers get the best feel for a space through perspective drawings.

So the issue becomes not graphics VS design, because it never really was outside of designers’ heads.  The issue is how can we make graphics that communicate effectively, and manage to not fire off alarm bells in designer’s and client’s brains.

Personally, I choose to concentrate on computer graphics over hand graphics not due to a lack of skill (believe me, if I put the time into drawing that I have put into rendering I’d be pretty good with a pencil), but because in my mind, it is the most honest form of representation.  If I model everything the way it is – which I can with no extra effort – I know exactly what I will see from a given view.  I can put a camera inside your eyes when you are sitting on a bench, and if you would actually see a sliver of that utility box, it’s going to be in the rendering.  The problem is, it would still set off alarm bells, all because of an effect that is becoming well-known in the media worlds of movies and video games.

The “Uncanny Valley” is an issue that became most well-known a few years ago when the movie “The Polar Express” came out. 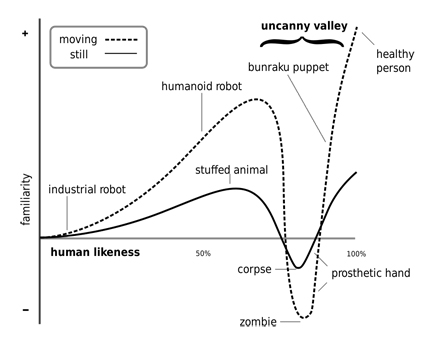 It’s the theory that as things become more realistic, they become more familiar, but only to a certain point.  Once things become TOO realistic, small things that are wrong make us cringe and react negatively.  In “The Polar Express” the thing that set people off was the eyes.  For all the realism the characters had, from mannerisms created by directly copying from actors in Motion Capture suits, to careful texture work, the fact that the eyes didn’t glisten correctly gave them a dead look, and made some people instantly see, instead of a heartwarming children’s story, a movie about a train filled with zombies… (note to self – Make a movie about a train full of zombies.  “Brains on the Orient Express”?)

In the ensuing years movies, and video games, have dealt with this issue in one of two ways.  Some have gone the route of making themselves, while beautiful, purposefully unrealistic.  This brings thoughts of movies such as “Up”, and games such as “Little Big Planet 2”.  Neither of these tries to be realistic – the characters look like cartoons, but with realistic flesh-tones (or woven sack-tones in the case of Little Big Planet), elements. 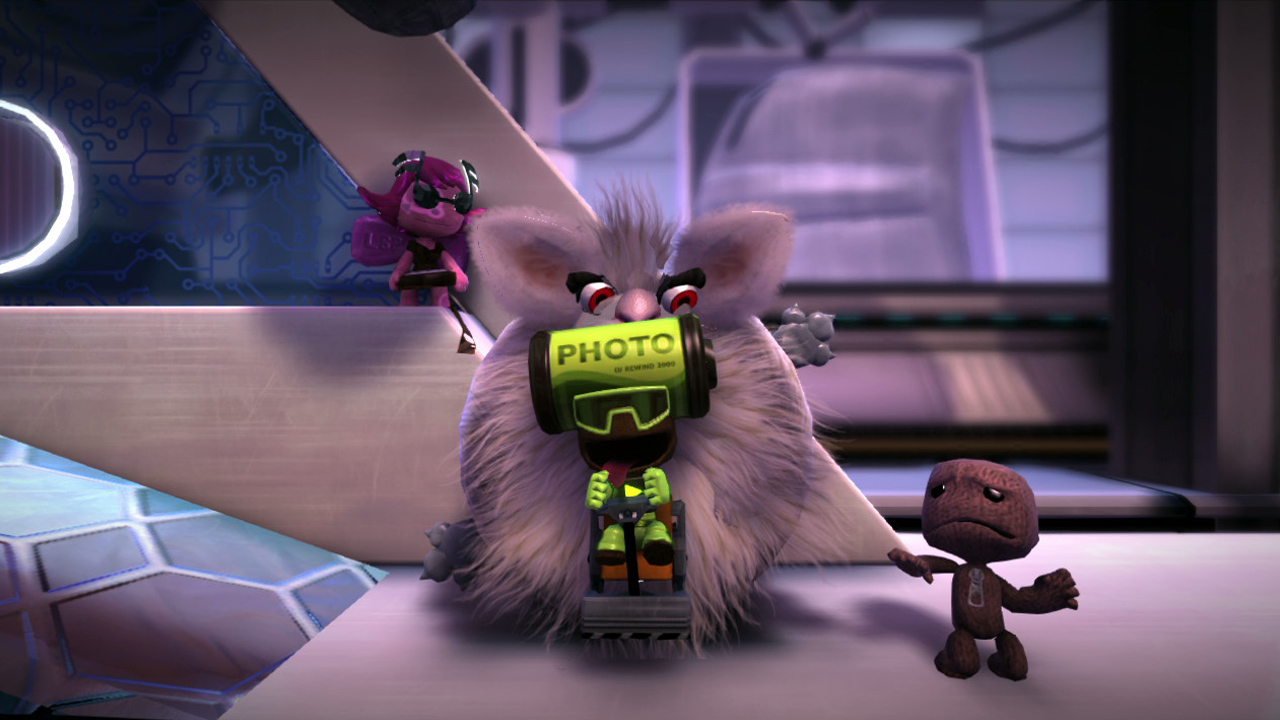 The other method is to continue to push the boundaries of realism.  Movies like Avatar skirt this method by having realistic aliens that we have no internal reference for as digital characters.  Where true realism is pushed the hardest today is in gaming.  Games like Uncharted 2, Heavy Rain, and Read Dead Redemption push realism in gaming past where it has been before.  As some of the best looking games widely available, they all have one thing in common. 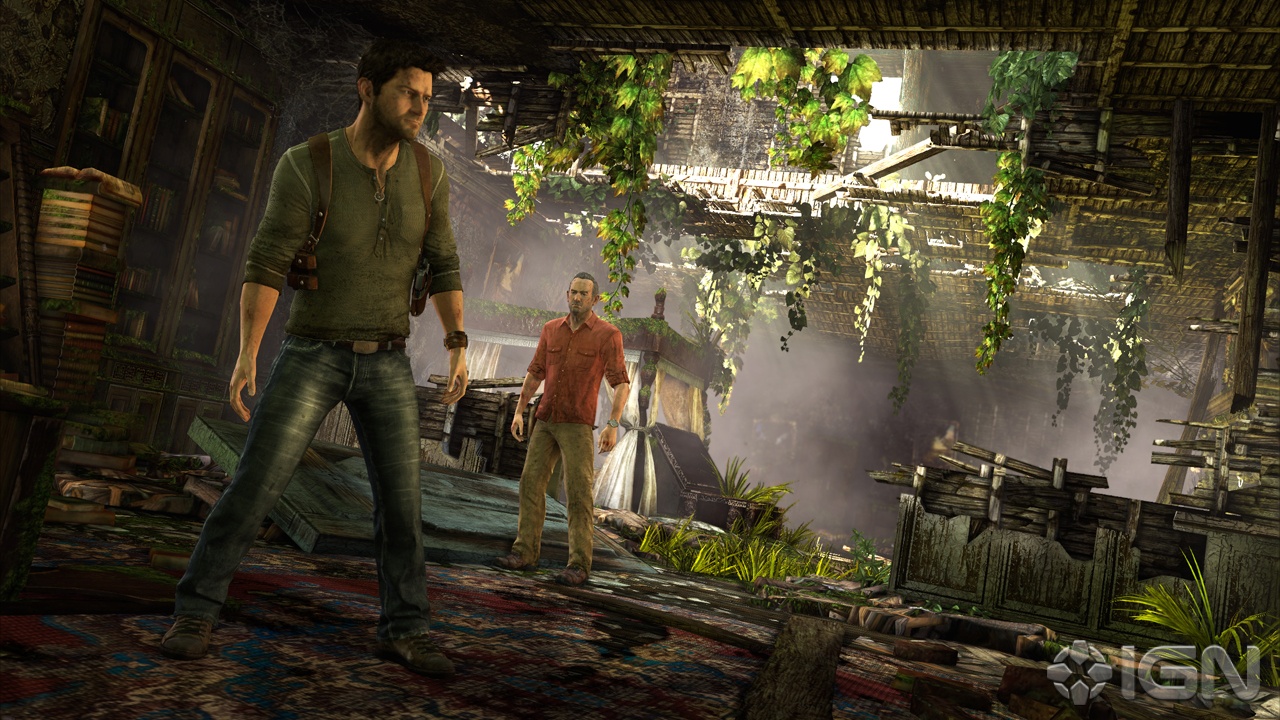 None of these games are set in pristine areas.  They all are set in places that have been lived in, that have wear and tear, grease and grime, chips and gashes.  I think this is one of the essential things to making a convincing 3D rendering, and one that doesn’t make you think you are being tricked by graphics.  The splinters out of the wood crate, the dirt on the boots, the powder burns on the pistol, all give it a realistic feel. 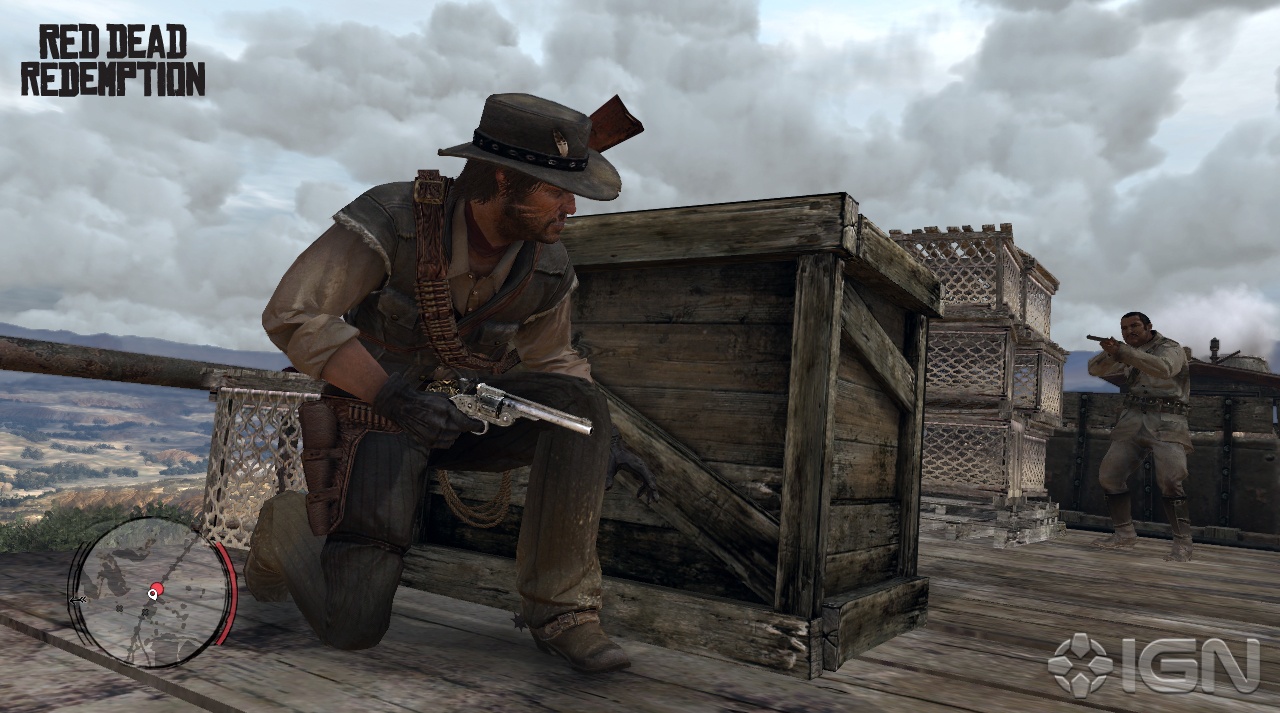 If that detail is paired with a render engine that has more than 1/30th of a second to output, it would give amazing results.

And those are the kind of results that I think we, as designers/graphic artists have to work for.  Gone are the days of the pristine landscape with rows of identical, perfectly pruned trees.  If we want buy-in from clients, and from other designers, we need to show all the blemishes on the face of our designs.  Whether it’s the ugly light industrial building that is visible through the trees, or the mottled color in the bricks, these are some of the things that A) will affect the spirit of place and B) that will create a sense of life in our renderings. 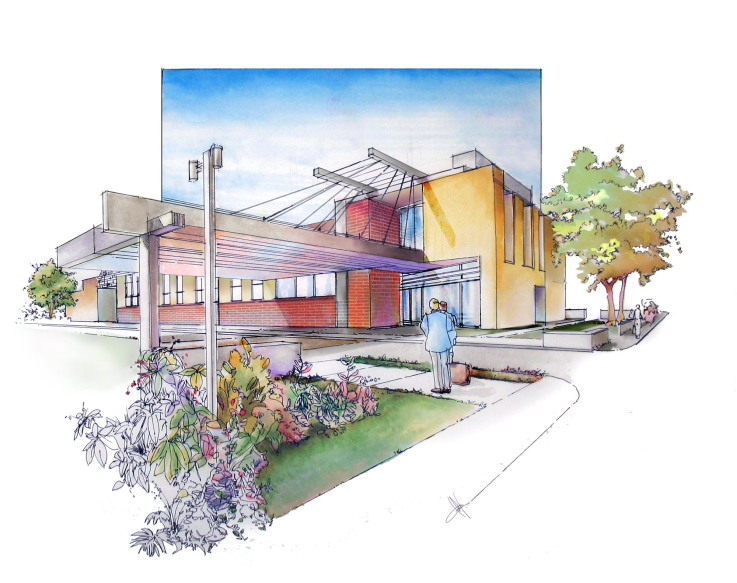 It adds a little depth, and a spark of randomness that is what makes the world what it is.

All other images from IGN.com