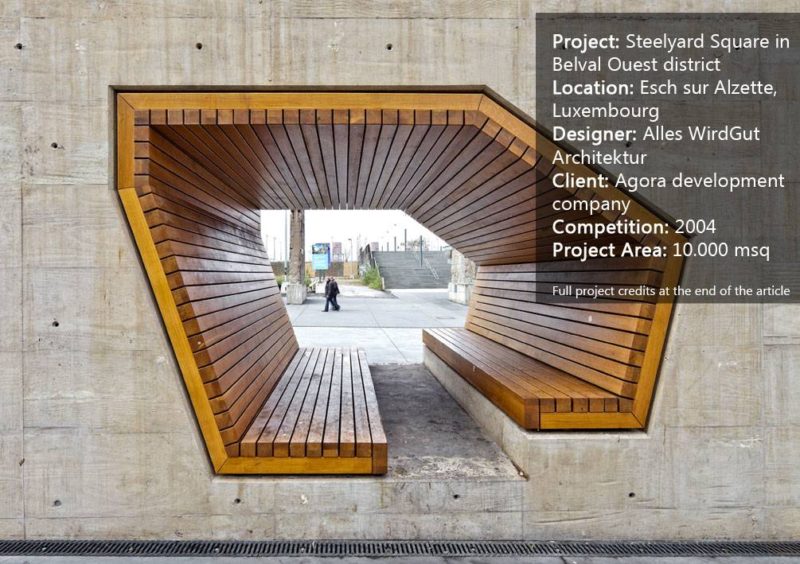 Article by Andrea Robezzati Steelyard Square in Belval Ouest district, by Alles WirdGut Architektur, in Esch sur Alzette, Luxembourg Establishing the right grade of frequency and relation between landscape architecture and neglected spaces of the cities is both the most exciting challenge but also the most difficult one, for an architect. These places always have negative impacts on the environment and their surrounding communities but at the same time they are full of potential and are, anyway, part of our cultural heritage, with a strong significance. Mostly, in these cases, the battle is in the middle, and what Alles WirdGut architects made here in Luxembourg is really extraordinary. If you are planning to visit Luxembourg, make a sign on your map to visit the second-largest city of the country, Esch-sur-Alzette. Here, today, you can walk inside a new modern, urban, regenerated district and at the same time breathe the quiet and misty atmosphere of what this site was in the past. 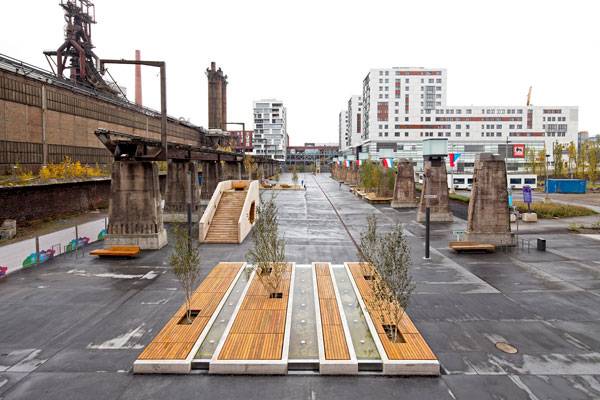 Belval Ouest: from a “Steel Court” to a New, Open, Mixed-use Community Situated on the west-end part of Esch-Sur-Alzette, neighborhood Belval Ouest was, in the last century, the main steelworks site of Luxembourg. But with the decline of steel production of the last few decades, the industry fell down, until the end of 90’s when it was completely closed. The symbolic “iron era” site of Luxembourg, in a short time, became the place of an effervescent and ambitious urban regenerative project in Europe. The area is really big, equal to about 120 soccer fields, and today is a symbol of a new 21st century mixed-use community. Here you can find housing spaces for up to 7000 people of all generations, workspaces for 25,000 people, places for research and study, schools, shopping, and leisure activities. The distances inside the district are really short so everything can be easily done on foot or by bike. You don’t need car use! 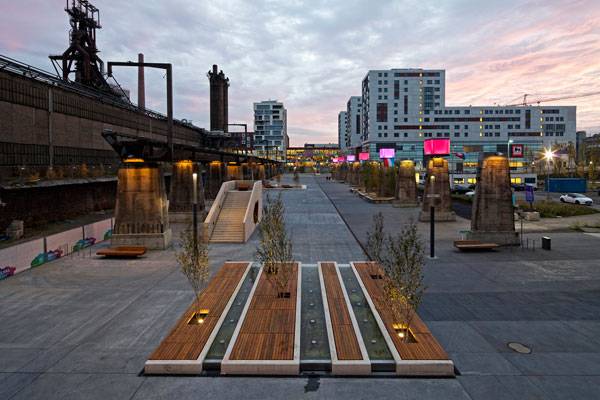 Belval Ouest district is based on an overall concept where public spaces and parks have an important role in creating urbanity. Steelyard Square is the main square, the center of the neighborhood, and its space is defined by forward-facing high-rise office buildings on one side and blast furnaces of the past on the other. The abandoned “Stonehenge-like” atmosphere of the old steel mill has been mixed with all requirements of a modern and representative city square. The result of WirdGut architects’ operation is a perfect combination of design restraint and intensive quest of harmony for the site; a unique ambience that has many synergies with its industrial surroundings.

As exemplified in the still-existing viaducts, the forms and the materials used for this project refer to the site’s industrial past, keeping the abandoned industrial atmosphere. The aging-capable materials used, such as concrete wood and untreated steel, in combination with rough detailing, make it possible for the patina of the past to return. All these solutions reflect the “keep it simple” approach used by the architects! 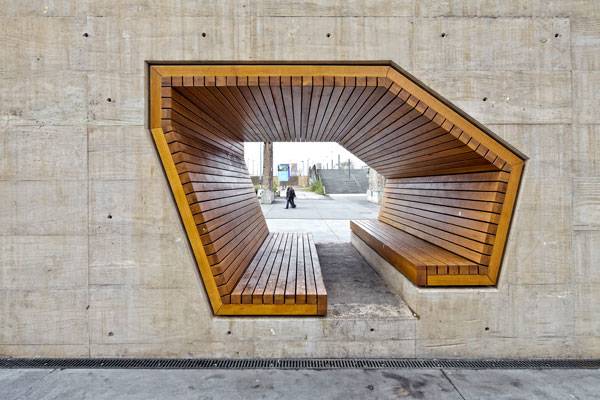 The dominating longitudinal edges of the square differ strongly in their character: its western side is the more modern and dynamic and consists of a straight line of modern office buildings and shopping malls. From this side, all the main entry routes meet the square. The east edge is hidden away by a hotel in the square´s southeast corner and the eastern viaduct. An old stone wall, together with a string of small-scale buildings, creates a series of intimate niches close to Belval´s remaining ruins. This edge is the quiet one, turned towards the past and late afternoon sunshine. Through reinforcing interventions, the design for the new square makes use of those characteristics to create a pattern of differentiated areas.

The seating areas and new trees are concentrated into islands, which leave empty large areas of the Steelyard Square’s space and also serve as focal points in this emptiness. The architects concentrated their design effort into several well-defined objects: like islands, they grow out of the square´s surface and serve as self-contained, quiet spaces for withdrawal and leisure. 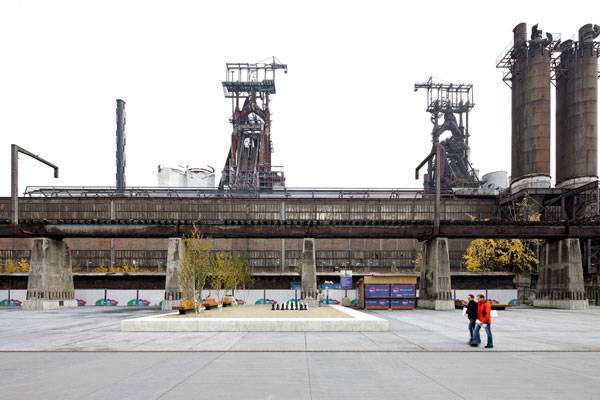 A network of clearly-accentuated steel joints connects the site´s edges with its contents by simply tracing the main urbanistic lines. Thus, the square and its surroundings are literally woven together. This construction principle makes it possible to build the square step-by-step together with the gradual development of its edges: after each successive building phase, the square will have a new form, closely tailored to the then-existing needs on site. Each new building phase will be carried out using a slightly different colour of concrete. In that way the square´s history will influence its future form. 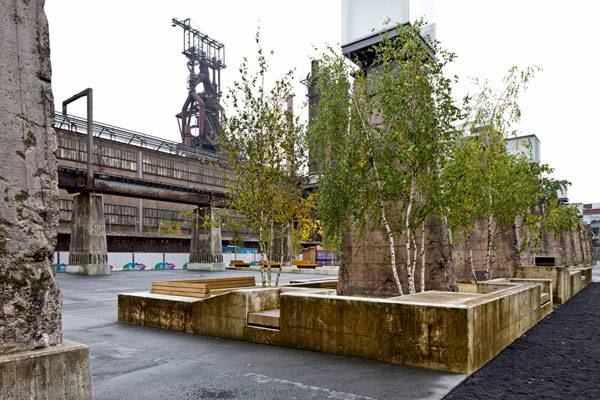 A second, finer network of cut expansion joints is spread out evenly across the different building phases, binding them back together to form a whole. It also serves as the basic structure for a pattern of overlapping horizontal stripes of two different floor finishes: the rough industrial concrete changes from its working clothes into an inner-city dinner jacket. 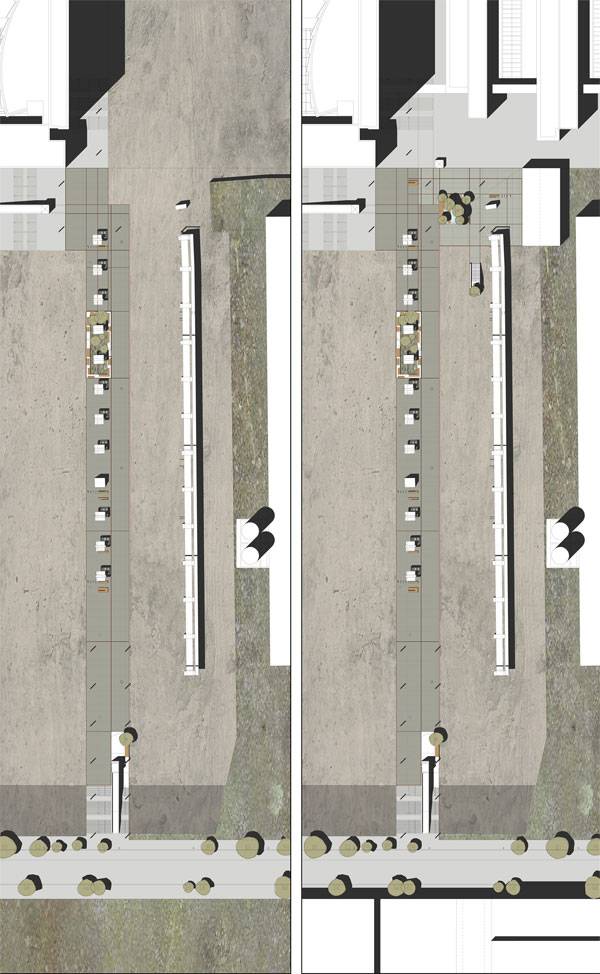 The lowered ground level is covered with a rough “carpet” which leaves the soil open in several places so as to keep the monumental history of the area still readable. Without any strict order, specific uses are playfully inserted into the “carpet”. These are situated where they are needed, but may also be altered or complemented; plantings are targeted interventions and not mere decoration. A water stair on the south side adds to the industrial ambience. Special qualities of the concept show in the different stages of realization: each stage articulates the conceptual show as a natural state. It is a concept which, in its aura and design, does justice to the extraordinary significance and grand monumentality of the premises. 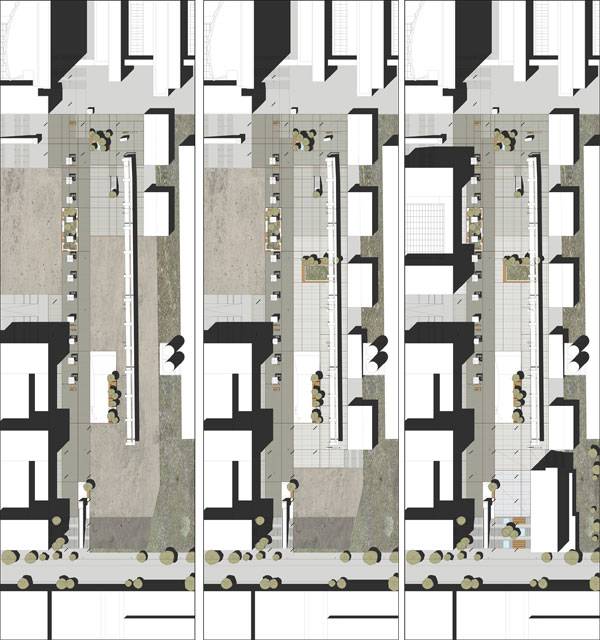 Working Within the Context and Being Inspired by it

With this project, AllesWirdGut Architects show us how establishing a strong connection with the surrounding space can have different points of reading; is not just a nostalgic interpretation coming from the history of a site, but it can be something more, it can inspire and drive new forms, new ideas, in a higher conceptual level of work. Living in this space will give you a dual sensation: in one way you enjoy new facilities and new opportunities that new design offers and at the same time you are kept in another reality, breathing the past-century industrial atmosphere. Will you travel, to this landscape design, the next time you are in Luxembourg?