Zeytouneh Square, by Gustafson Porter, in Beirut, Lebanon. Lebanon’s capital, Beirut, is an ancient city that predates even recorded history. In the 1960s, it was considered one of the world’s most vibrant and diverse cities — a center for arts, culture, and tourism. But in 1975, Lebanon was plunged into a civil war that devastated the nation, tearing communities apart, both literally and figuratively. This civil war came to an end in 1990, but the country is still piecing together communities ruined by a war whose aftermath continues to resonate in daily life. 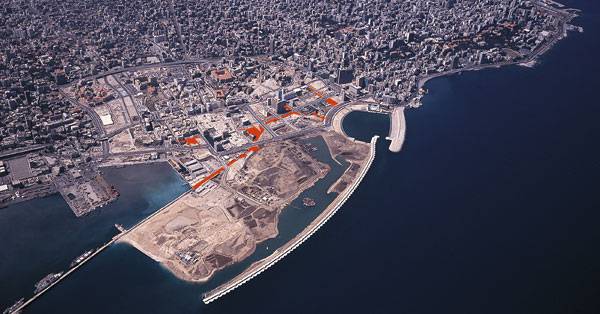 Rebuilding Beirut’s infrastructure and identity with public space Today, Beirut is a city at a crossroads. The destruction of the capital was immeasurable. With so much of the city’s physical infrastructure destroyed, much of Beirut has had to be rebuilt from scratch. Even worse, the war has left the community divided. However, Beirut now has an opportunity to forge a new image for itself. It aims to build a city that reflects the country’s post-war identity while still respecting the historical context and, above all, reunites an urban community divided by war and strife. 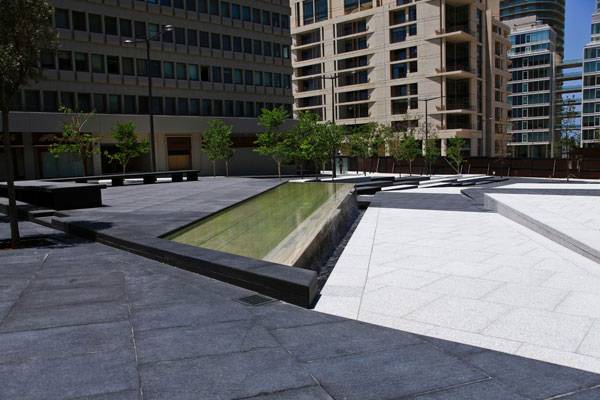 Public works will play a key role in the path to achieving these ideals. Community spaces are essential to reconnecting and rebuilding damaged communities. By creating safe and inclusive public space, the city hopes to unite its people, create a sense of community solidarity, and facilitate the healing process for its people. 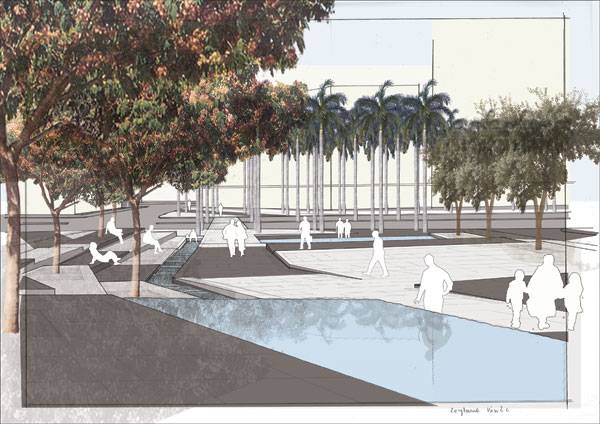 Zeytouneh Square is a keystone project in this redevelopment. Designed by award-winning landscape architecture firm Gustafson Porter and opened to the public in 2012, Zeytouneh Square is one public space part of larger project: Beirut’s Shoreline Walk, a linear corridor of public spaces through the heart of downtown. 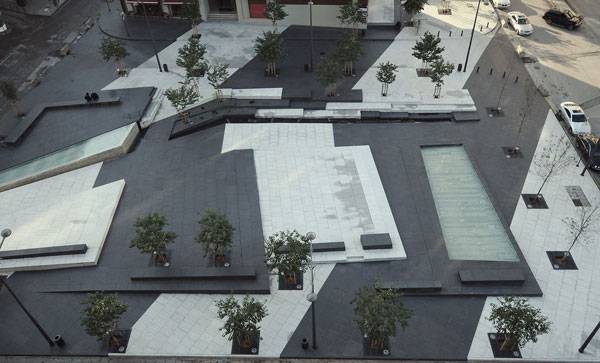 Representing a transition between old and new This project will showcase the best in urban design, and create an inviting downtown corridor. The walk represents the physical edge of the ancient city and the modern, newly developed district built on top of a landfill. It serves not only as a movement corridor in the city’s downtown, but also as a transitional space between the old city and the new. 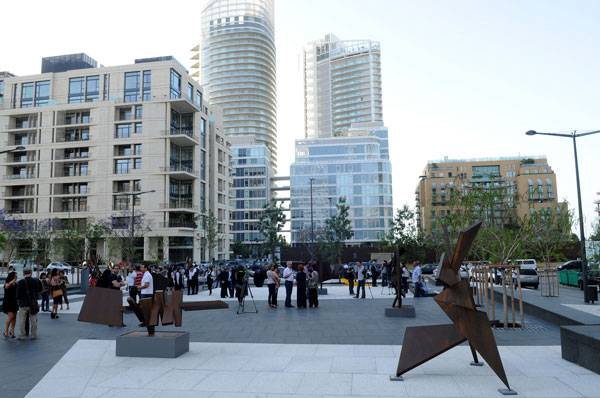 The space also represents the metaphorical transitions the city is undergoing: from pre- to post-war Lebanon, and from divided to a united community. Daring, unique and dramatic Gustafson Porter seems to have experimented with this project, and by pushing the limits, has once again managed to create a truly unique space.  Dramatic water features and paving give the site a distinctive look. The sleek, bold, ultra-modern look of the square matches the character of the surrounding buildings and gives us the impression of a more modern, edgy Beirut. 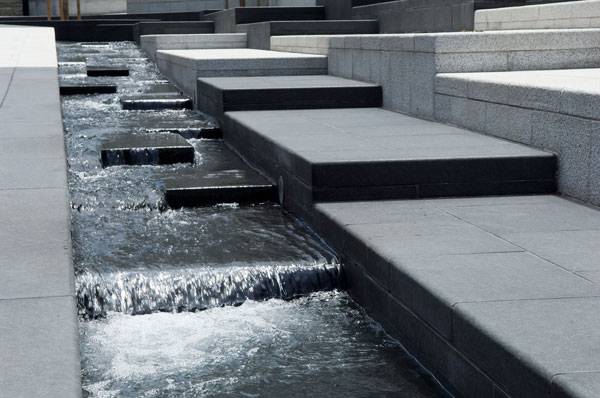 The paving pattern also extends into the adjacent spaces, eliminating hard edges and adding a dramatic flare to the nearby buildings and streets. These bold patterns make quite an impression from the ground level, but also create a spectacular display from above, seen by those in the adjacent high-rise buildings. But the bold black-and-white paving isn’t just for drama — it was inspired by the layering of black-and-white basalt and limestone, iconic in Middle Eastern architecture. Even the patterns in which the contrasting patterns are laid refer to the land’s topography. 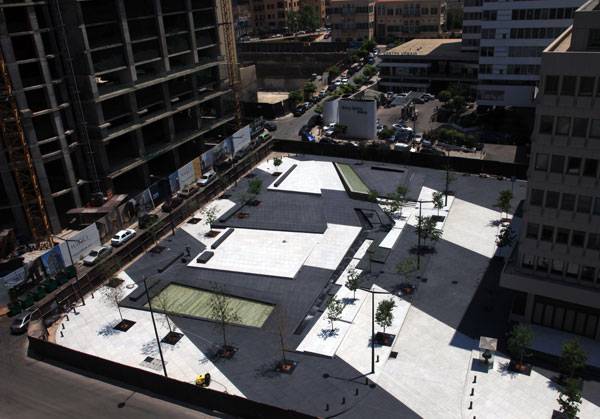 The use of water on site is also significant. Simple pools with jets and a stream-like water feature contribute to the atmosphere, creating relaxing, ambient sounds while injecting animation and life into the space. These features are open and accessible to users, allowing for opportunities for direct interaction and water play. 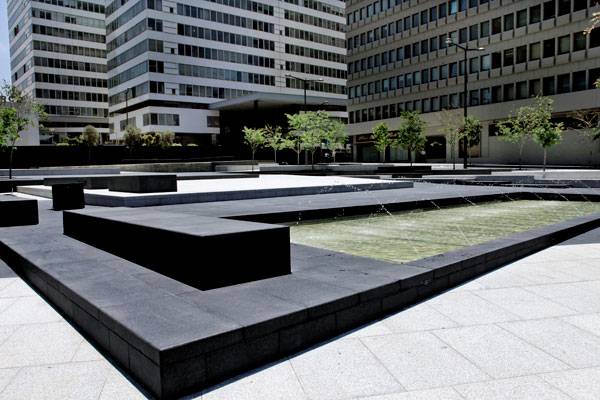 Unfortunately, though, the site lacks vegetation, with only a few trees to break up the dominating hardscape and provide shade to users. A place to foster community ties In addition to its function as a passive recreational space and movement corridor, Zeytouneh Square will also function as a space for community events, gatherings, and festivals. As a part of the Shoreline Walk, the site will have a near-constant flow of people coming through, making it an ideal location for cultural events and gatherings — activities that are essential to strengthening community ties. The designers have even purposefully incorporated slopes and terracing in order to create an informal space where music, theater, and films can be shown. 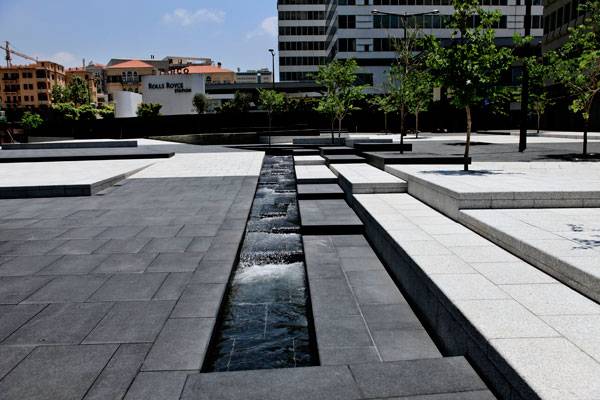 A community reconnected? Zeytouneh Square is a unique public space that goes beyond being simply a space for people: It aims to reconnect communities and to celebrate Beirut’s new identity 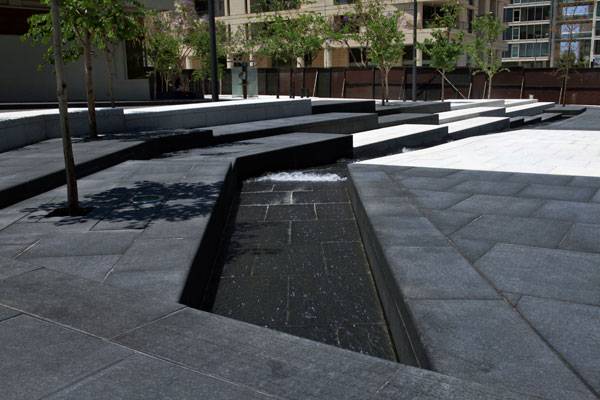 It’s too soon to know how the community might be affected by Beirut’s investment in this type of community-oriented public space, but there is one thing we can say with certainty: Building a sense of community is key to successful cities, and public space is essential to establishing and building community ties. Recommended Reading: