Channel Center Park and Iron Street Park, by Halvorson Design Partnership, Boston, Massachusetts. Relatively small it may be, but Boston as a city is still growing and building new neighborhoods such as Channel Center. The city’s seaport district, commonly known as the Innovation District, has been transforming in the recent years to make the area more vibrant with new businesses and residential areas. With a mixture of new office buildings and over 200 residential units, Channel Center is one of the mixed-use projects that are the first to develop its multiple parcels. Amongst the initial implementations, a pocket park named Iron Street Park and a large neighborhood park, Channel Center Park have begun to grace Boston with their innovative and community-spirited designs. 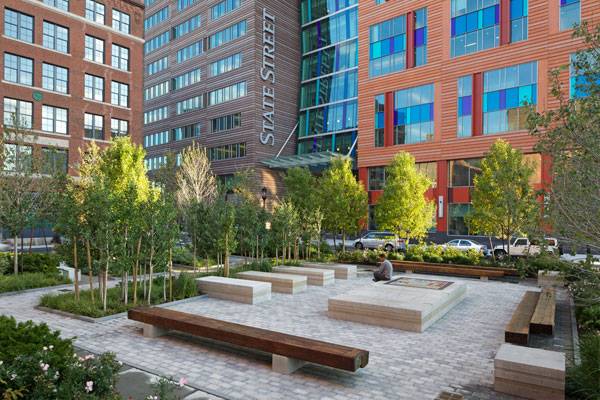 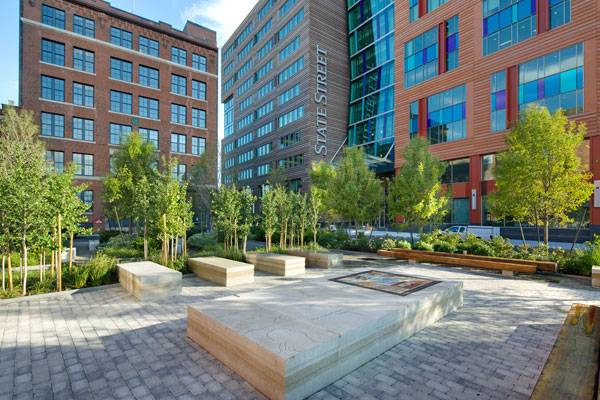 Design Challenges The challenges that already exist for these open spaces is to be versatile enough to accommodate many different users (not to mention the existing residences already present and growing in the area), as well as create a vision that sets the character of the future public realm projects within the district. What’s more, these two spaces, although they may have higher common goals, they vary in size and function. 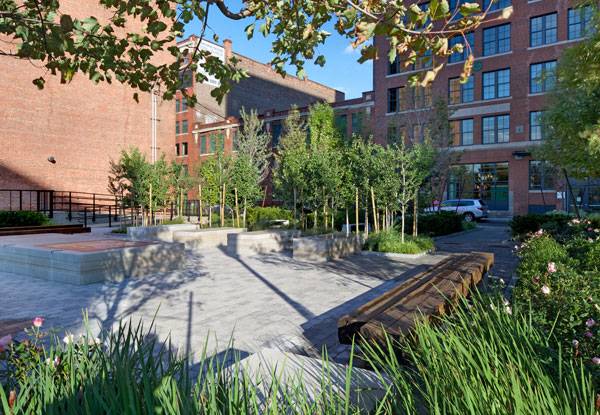 Iron Street Park Designed in a more intimate setting at an intersection between two streets, this smaller pocket park is perfect for lunch breaks, smartphone checks, and performances. The design idea was envisioned as an outdoor living room and you can see this reflecting on the carefully considered positions of the park’s seating and central artistic piece that almost resembles a living room’s couches and center table. 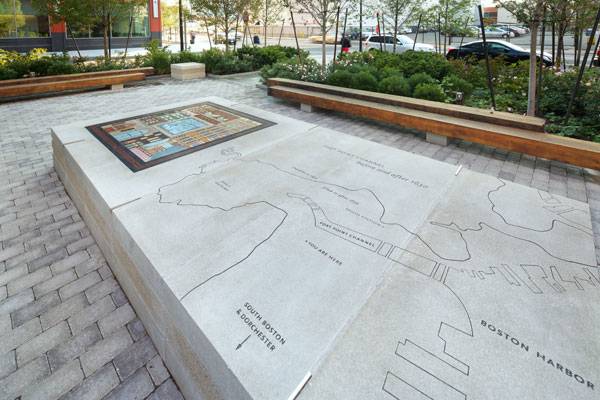 The use of art within the parks The park also makes references to the Fort Point Channel District’s industrial park through the use of materials and artistic pieces. Artist Lisa Houck has designed a mosaic piece and graphic design Flanders + Associates has depicted the history of Boston’s Seaport area and its evolution over time. Particularly, the mosaic is a colorful and lively addition designed to incorporate the historic themes of the park and depicts the iconic loft buildings that were built in the neighborhood 100 years ago. 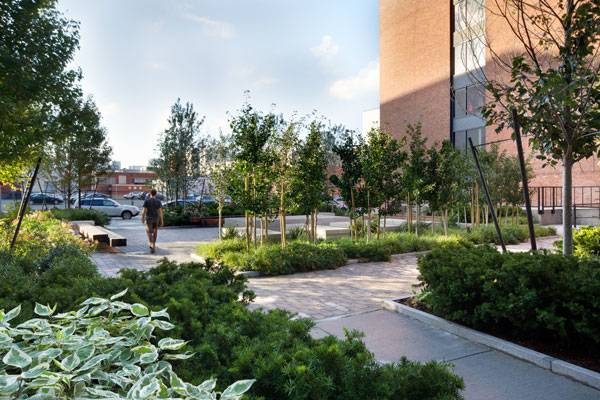 The concrete plinths are also highlighted with quotations of the area’s history. What’s more, the most interesting incorporation of the area’s history is how some of the seating is also made from original beams from the historic buildings, nicely bringing together the artistic and construction design. Channel Center Park This park is bigger and seeing as it is situated at the forefront of the business and residential environment, the firm has done a good job of creating a welcoming character and a beautiful green backdrop. There are many seating areas and open spaces, as well as a playground. 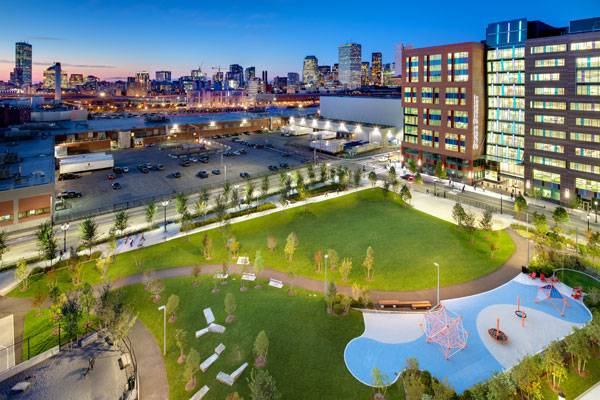 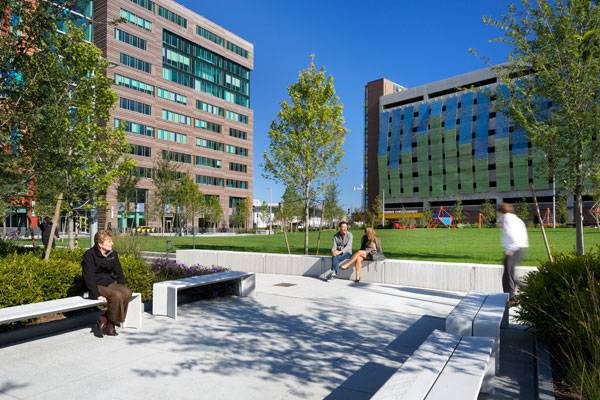 The play space is specially designed to stimulate children’s large motor skills that include features like a rope climbing structure, grassy mound and a lawn circle as well as children scaled furniture as reflection and relaxation zones to balance out the play activity with quieter gatherings. Unlike the nearby Iron Street Park that follows a geometrical language, Channel Center Park incorporates a long, slightly curving main path to allow users to move through the park with ease. 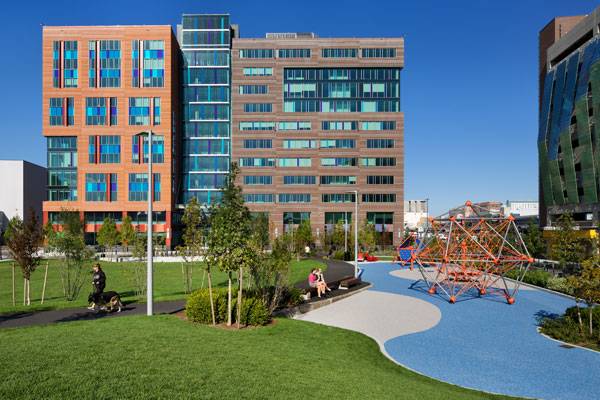 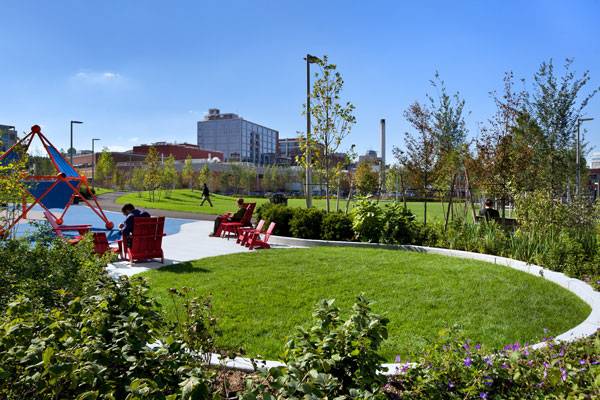 The wooden benches in both parks are made out of reclaimed wood from an existing building of the old Channel Center site. These benches, as well as the salvaged granite foundation blocks, are slightly set into the grassy hillside to demonstrate this well-remembered industrial past of the Fort Point Channel. Of course, they are also great to sit on! 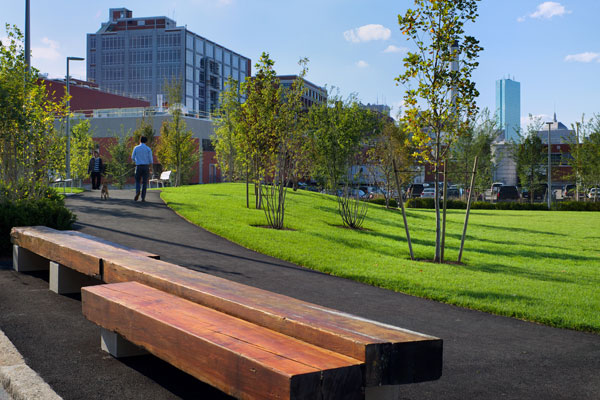 These two parks are already demonstrating how beneficial they will become to the future growth of this neighborhood. Not only in appearance but also in functionality, the landscape treatments that have been done to improve this area, along with these open spaces, have really managed to create streetscape improvements consisting of new sidewalks, street trees and lighting. As Boston’s growing seaport district celebrates the past and looks forward to the future, it can clearly be seen that these two parks have played a major role in paving the way. Recommended Reading: