We take a closer look at the world amphibious architecture and how it will help cities adapt to climate change. At the end of August 2015, architects, engineers, designers, researchers, and experts met in Bangkok, Thailand, for the first International Conference on Amphibious Architecture Design and Engineering (ICAADE). They gathered to share their experience and knowledge in dealing with floods and their common goal to develop a new paradigm of living with water. It was the first conference to raise awareness of the need for innovative ideas in order to adapt to the effects of climate change while proposing tested solutions or concepts in all scales of urban development. ONE OF THE MAJOR EFFECTS of climate change is the melting of the ice in the northern hemisphere, which is causing the sea level to rise. According to the United Nations, three-quarters of the world’s largest cities are located along the coast and we are expecting 70 percent of the world’s population to live in cities by 2050. Another significant effect of climate change is the increased amounts of rainfall, which is already causing more frequent floods around the world. With the increase in population living in urban areas, the number of people exposed to floods will grow substantially in the future, augmenting as well the consequences of climate change. WATCH: Future Sea Level Rise: Top 10 Countries In Danger

The most exposed to sea-level rise are the coastal areas and deltas. The current defenses to protect cities from rising waters won’t be able to cope with that in the near future, according to the experts. We will have to either leave the areas at risk to the rising waters or change the paradigm and adapt to live with climate change. To learn more about the effects of climate change, read out article – 10 Fascinating Climate Change Facts You Should Know

What is Amphibious Architecture?

Amphibious architecture adapts to dry or wet conditions without causing any type of damage during or after a flood. ICAADE brought together diverse definitions of amphibious architecture developed around the world. According to the Bouyant Foundation, it is “an alternative flood mitigation strategy that allows an otherwise-ordinary structure to float on the surface of rising floodwater rather than succumb to inundation.” WATCH: The Buoyant Foundation Project Movie AMPHIBIOUS STRUCTURES are characterized by the specificity of their buoyant foundation, which allows them to stay fixed on the ground during regular circumstances and float up as high as necessary when the water level rises. In order not to float away, amphibious structures are fixed in place with a system of vertical guidance posts. Thanks to that, when the water level goes back to normal, the structure descends precisely back to its initial position without any damage. Thailand has officially gotten its first such house after the devastating floods that country experienced in 2011. AROUND THE WORLD, different technologies for amphibious foundations have been developed, from the almost DIY, low-cost solutions invented by the inhabitants themselves in Old River Landing, Louisiana, to the more advanced ones designed by specialists who integrate the floating foundation and vertical guidance system into the design of the structure.

The Netherlands Are Leading the Way in Amphibious Architecture

Most of the realized designed amphibious solutions are located in the Netherlands, a country in which two-thirds of the land is below sea level. A government-driven experimental program for amphibious developments has allowed for the construction of a few experimental amphibious communities, which are functioning. Their inhabitants are happy to have their homes dry. Chris Zevenbergen, a co-organizer of ICAADE, was part of the Maasbommel project, in which 34 amphibious homes were built outside of the protection of a dyke, adapted to rise with changes in the river level. In New Orleans, Elizabeth English – also a co-organizer of ICAADE — is working on retrofitting existing structures located in flood-prone areas into amphibious architecture, seeking to help avoid the damages caused by floods in the future. WATCH: Floating Cities: Environmental Atlas of Europe 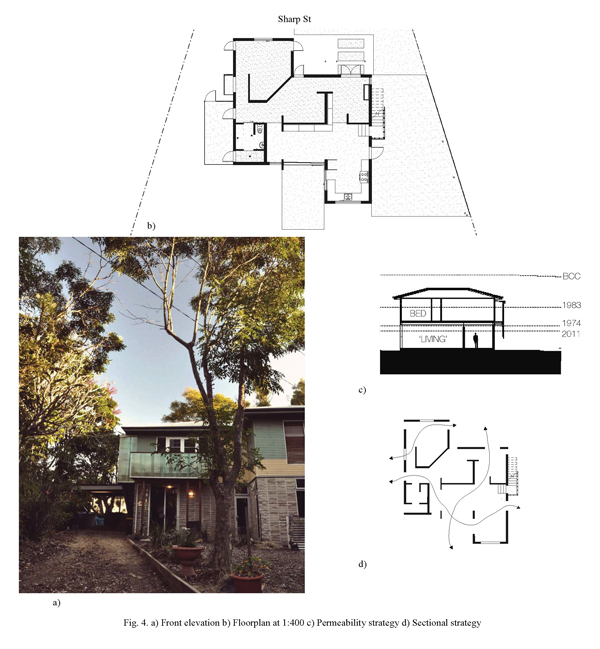 Wet proof design: the house is designed to accommodate water during a flood and evacuate it easily afterward without causing much damage. Photo credit: James Davidson Architect and Samuel Bowstead

It’s Not a New Idea

Amphibious architecture isn’t a new idea. It has long been around in different forms around the world, in places where communities have come up with local adaptation strategies to fluctuating water levels, by living with the water. We are looking at those practices today, as the necessity to adapt is no longer avoidable. BUT IT ISN’T ONLY ABOUT ARCHITECTURE AND STRUCTURES. An amphibious city needs to be flexible and able to adapt all of its components to changing conditions. Anything you can imagine can be designed to float when needed, according to Koen Olthius, one of the keynote speakers at the conference. He has built a company that works only on such developments, with a vision that the future of cities has to be designed to become more flexible and resilient in all of their consisting elements — in terms of infrastructure, public spaces, landscapes, gardens, biodiversity, and so on.

What is the Role of Landscape Architects?

We can consider certain landscapes as naturally amphibious in the sense that they have been designed by nature to accommodate water during exceptional events and go back to normal when the water goes down. Such landscapes are those in the river plains, for example. This natural amphibious function of the river landscapes has been disrupted by urbanization. People have forgotten how to live with the natural water cycles, constructing a static urban environment protected by elevated land and levees. WATCH: Floating Vision Koen Olthuis

However, with the pressure of rising sea levels, it is becoming necessary to give back the space for water. Landscape architects have already been working on large- and small-scale planning to accommodate water as part of the design and functions of the landscape. Their role is to take naturally amphibious landscapes and upgrade them for the next century of climate change. Recommended Reading:

AMPHIBIOUS LANDSCAPES are also public spaces in the urban environment that will need to be able to provide diverse functions for dry and wet conditions in different times. Landscapes in cities are some of the few permeable spaces, and if designed well, we can save them from extreme pluvial flooding due to climate change. Rotterdam’s water square that we’ve reviewed for you is one such approach. On a larger scale, vast landscapes can be transformed to serve as water-retention areas and protect adjacent territories from being flooded.

“Room for the River”

Such projects aren’t new, of course, but they are becoming much better designed, thanks to landscape architects. One of the most famous is probably Holland’s “Room for the river” program, consisting of 39 projects all across the country to redesign the landscape of its main rivers to give them back their space. World Wide Development of Amphibious Architecture  Taiwan, a country feeling the effect of sea-level rise just as much, isn’t staying behind. A project developed by the department of Marine Engineering at National Sun Yat-sen University showed ICAADE’s audience a landscape approach to deal with the issue. They transform the problem of rising sea levels into an advantage. By carefully planning space for the water, they are creating a unique habitat for species and people, while at the same time protecting the existing settlements from floods. WATCH: Netherlands: An Island in Nijmegen | European Journal

How Can the Amphibious Approach Help Us Adapt to Climate Change?

Big cities around the world are already facing the effects of climate change and the pressure of urbanization. With such an unsecure future, we need to come up with strategies, ideas, and solutions that provide flexibility and resilience to the cities. The projects we build today have to be designed for the future. This is exactly what amphibious architecture provides. It can range from just one building to the scale of a neighborhood or to the whole city. What is more, it is a strategy that aims to help the most vulnerable and very often the poorest communities around the world. According to the United Nations, about a quarter of the world’s population lives in slums. They are very often located in the areas of cities exposed to risks of flood. In such communities, amphibious architecture can provide a better quality of life and make those neighborhoods recognized parts of cities. THE ICAADE COMMITTEE is creating a team to work on a low-cost amphibious solution for the world. Meanwhile, floating solutions can help upgrade not only our developed cities, but most importantly the slums. Koen Olthius compared the city to a smart phone, and he created what he calls city apps — floating elements with different functions that can be inserted into a city and removed once the need is no longer there. In this way, slums can upgrade themselves with the necessary services, but can even create the lacking public spaces or agricultural land using the vastly available water surrounding most of them.

We can see that our world is changing way too fast, and the conventional ways we know cannot catch up. Amphibious design is here to upgrade those adaptation skills and create a more flexible urban environment capable of adapting to some significant effects of climate change. ICAADE was just the first of many such conferences to come. One of its the outcomes is the decision to establish an International Amphibious Alliance to foster the exchange of ideas, experiences, practices, and knowledge from around the world and build a common ground for an interdisciplinary range of experts involved in amphibious planning.

ICAADE conference in summer 2017 in Canada

If you are working on such projects or are interested in exploring the potential of amphibious design in your work, get ready to join the second ICAADE conference in summer 2017 in Canada. Meanwhile, think “amphibious” while working on your next project located in a flood-risk area to help create a climate-resilient future for all of us. Recommended Reading: