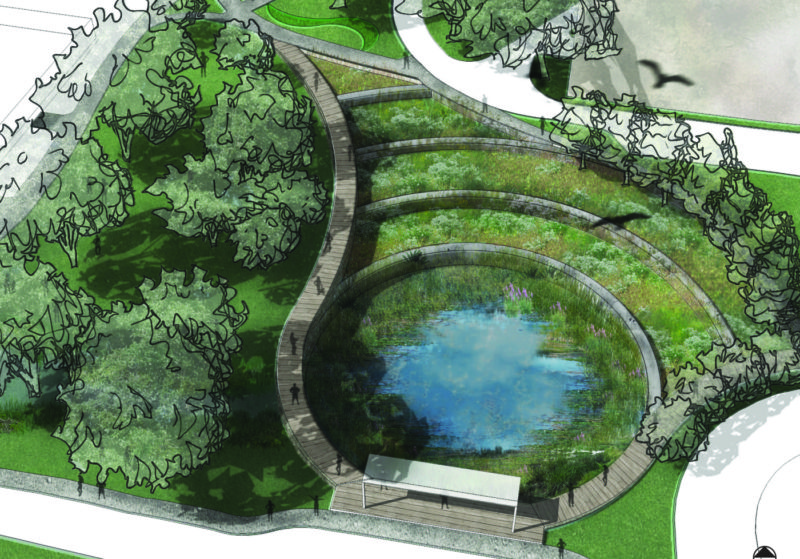 Standard urban development builds systems designed to move stormwater quickly away from where it falls.  The efficiency of gutter and pipe systems allows stormwater to carry sediment, bacteria, nutrients, and even heavy metals into bodies of water.  It also places more stress on natural waterways because runoff is quickly discharged into main systems, increasing peak flows.  To encourage non-traditional thinking about drainage systems, the EPA has asked students to examine how green infrastructure can reduce these issues. 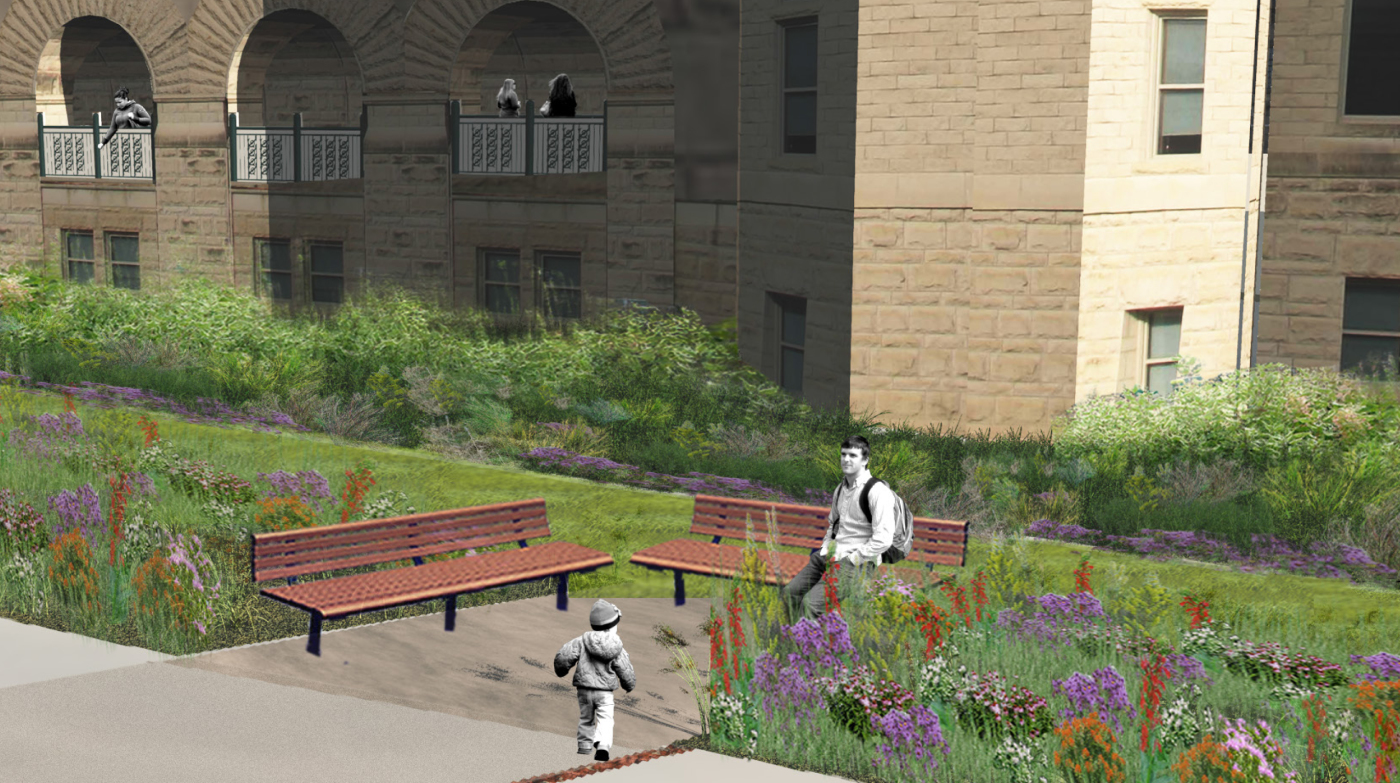 A seating nook designed beside a rain garden and wet meadow in a winning entry from Kansas State.

The EPA’s annual Campus RainWorks Challenge prompts university students to propose utilizing green infrastructure on their campuses.  The competition aims to have students consider and promote both the functional and economic potential that green infrastructure can provide.  It also strongly encourages interdisciplinary collaboration, being open to fields including landscape architecture, planning, engineering, biology, hydrology, and even economics.  Each entry is judged on its effective performance, its innovation and value to campus, the level of interdisciplinary collaboration, and level of proper documentation.  This April, the EPA announced winners from 84 team entries in two categories, Master Plan and Site Design.

The University of Florida nabbed first place in the Master Plan category.  The team developed a proposal which treats the stormwater produced in a 67.6 acre watershed on campus for rainfall events up to a 100 year storm.  At the University of Florida, stormwater is handled through a complex network of pipes which convey the water to the south end of campus, released into natural water bodies, and ends up in Lake Alice, the original detention pond for built for campus.

The team proposed daylighting the underground stormwater infrastructure in an “artful treatment matrix”.  In place of rapid conveyance systems, the team used surface-based green infrastructure to treat and slow the stormwater as preemptive pollution and flood mitigation as it moves from north to south on campus towards Lake Alice.  The three-phased plan included a large bioretention pond to replace the current holding pit.  Other measures include two more detention areas – one pond and a linear basin along a main thoroughfare – as well as rain gardens interspersed with playful water elements like a purple weeping pipe. 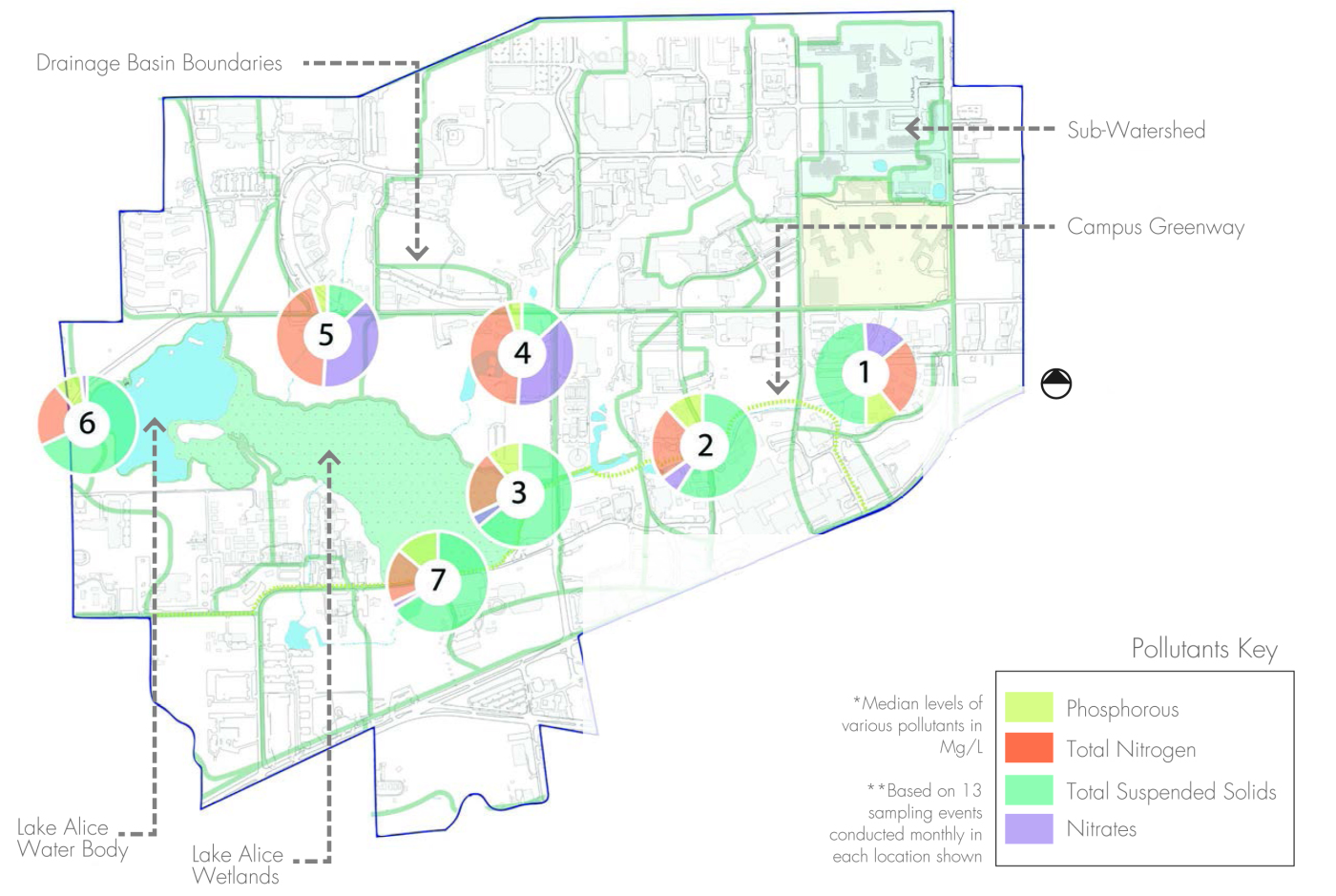 University of Florida: The map shows the focus watershed and downstream areas with significant pollution. 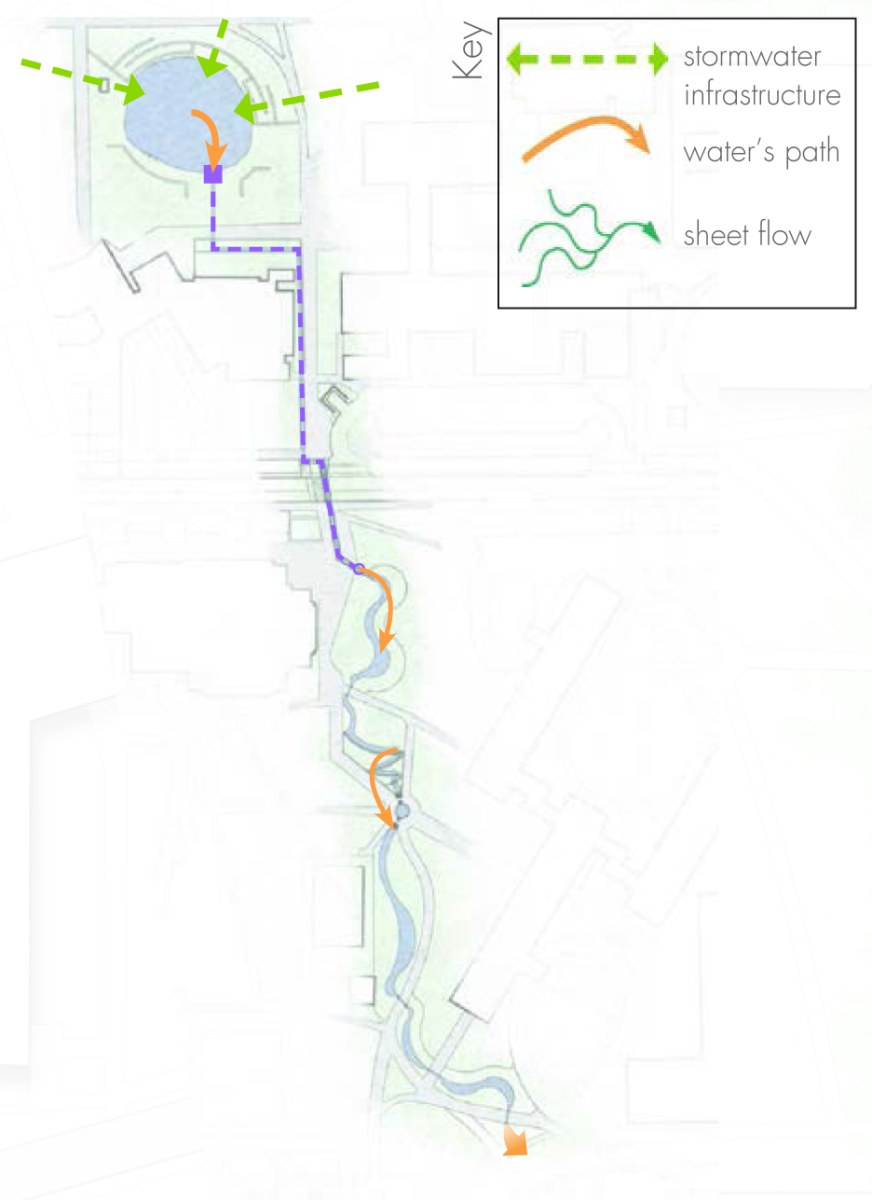 The plan of the Master Plan’s upper zone releases water from current infrastructure into the proposed above-ground system.  The final stage of the campus stormwater detention system is shown in the lead image. 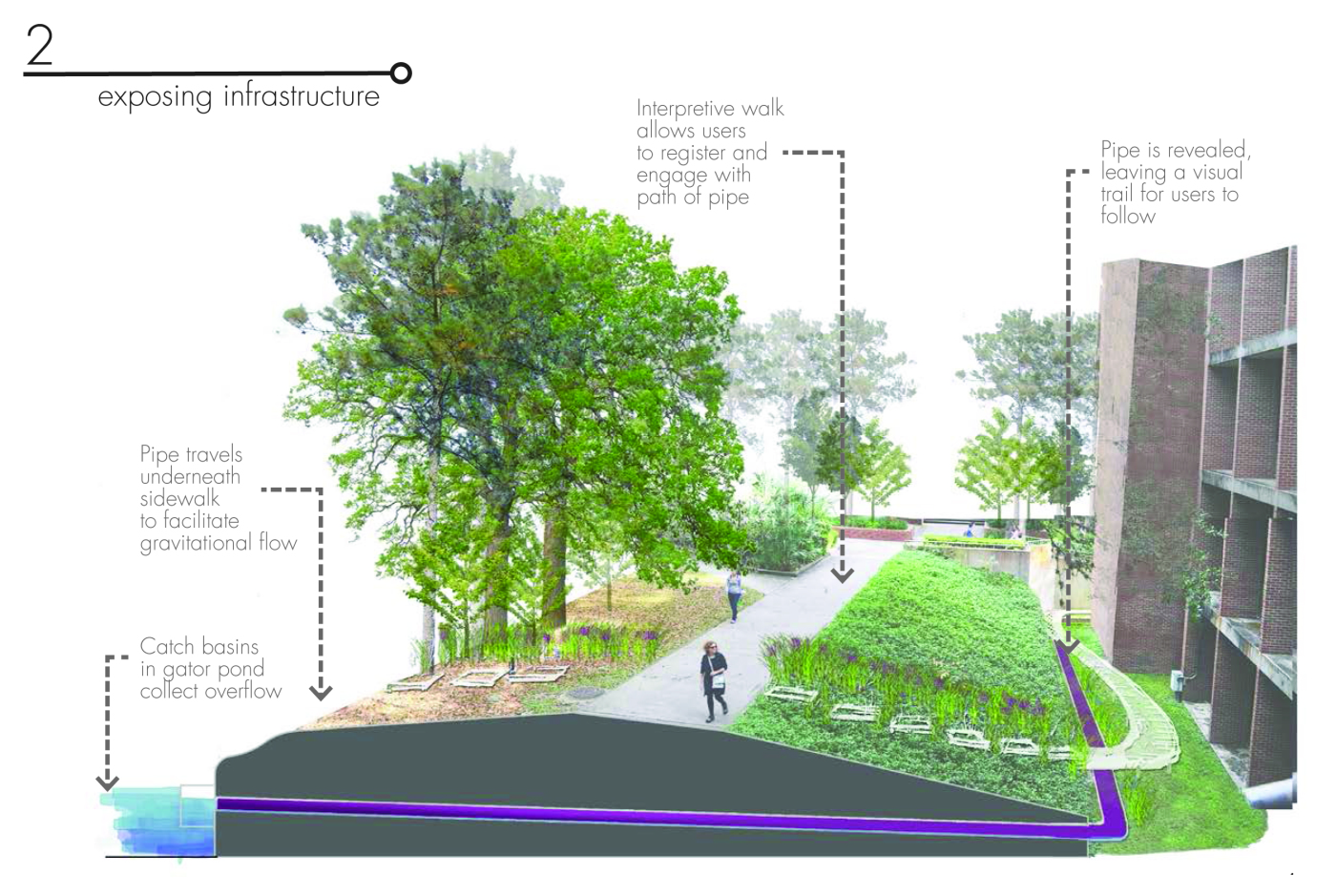 A purple pipe, which later discharges into green infrastructure, calls attention to the path of stormwater throughout campus.

Bioswales separate vehicular and pedestrian circulation.  They add both functional and aesthetic value to the street.

The Yulee Pit is the final point in the proposed campus water retention and mitigation system.

In the Site Design category, Kansas State placed first.  The team responded to a $5.1 million recommendation from a consulting engineer firm to fix campus stormwater issues by enlarging the existing pipe network.  The team wanted to demonstrate that the issues could be addressed through green infrastructure methods by slowing and reducing the stormwater entering the system.  They focused their proposal on a strip of lawn bordering the commons next to the campus library.

As a highly visible part of campus, the design provides both technical performance and education.  Two small, existing depressions were reworked to create a wet meadow.  Combined with several small rain gardens, the site retains all the stormwater from a one year storm and 65% from a ten year storm.  The team also utilized a striking combination of details to bring attention to the functional stormwater management features.  Where the site borders the commons, stone runnels collect water, which is then conveyed under decorative grates across the path into the bio-retention areas.  The vegetation scheme reflects a native Kansas prairie ecosystem, transitioning from wet to mesic to dry plant communities as the terrain moves above the retention zone.  The native vegetation, in addition to its stormwater benefits, replaced low-functioning irrigated lawn. 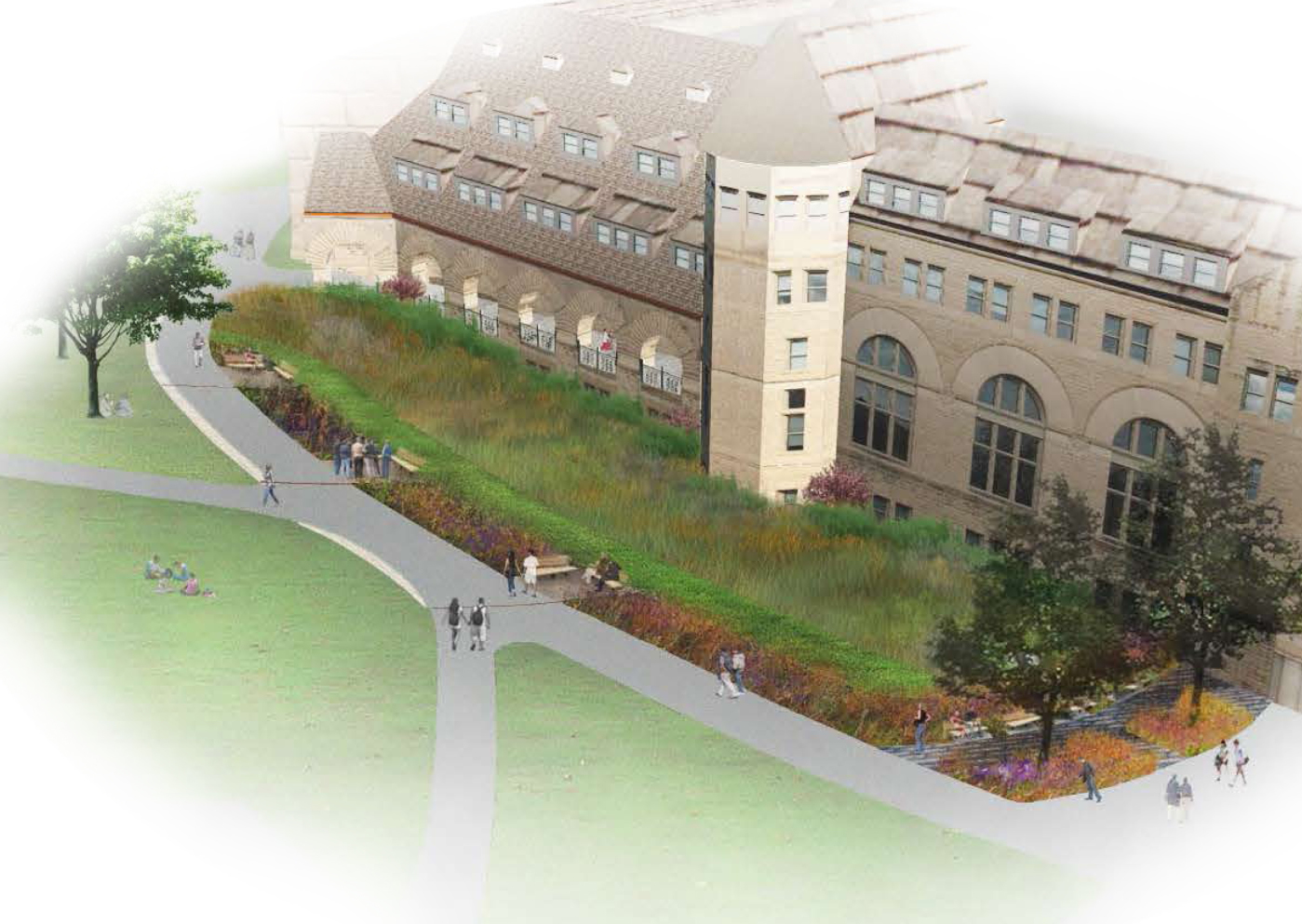 While the existing site condition sends all runoff off site in pipes, the proposed design retains all the runoff produced in its watershed from a one year storm event.

Stormwater runoff is collected from the lawn and conveyed across the path to bioretention areas. 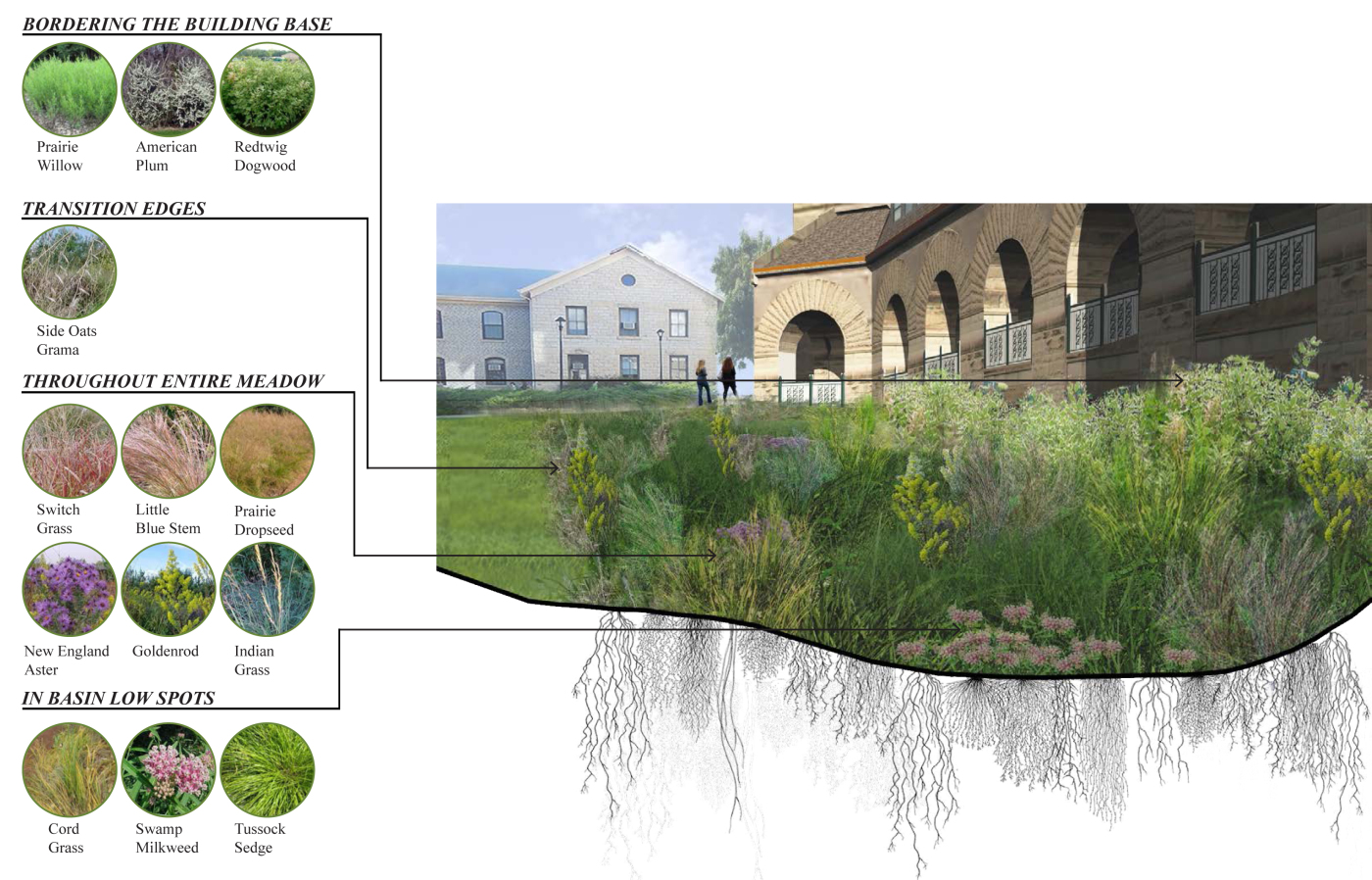 The plant palette developed by the Kansas State team reflects a sensitivity to native plant communities and topography.

To see the winning entries, as well as second place and honorable mentions, go to the EPA’s Campus RainWorks Challenge page. The 2014 call for entries has already begun.  Registration closes October 3, and entries are due December 19.

All images provided by the EPA.