RheinRing designed by  Marco Hemmerling. Linking two bridges crossing the Rhine in Cologne, Germany, could have been a simple exercise in functionality. But the RheinRing, designed by Marco Hemmerling, would be a work of art providing an ambient space where people can socialize and linger. The sweeping arc of the planned structure adds an essence of modern art and surrealism to an area often filled with art afficionados and tourists visiting the Ludwig museum. 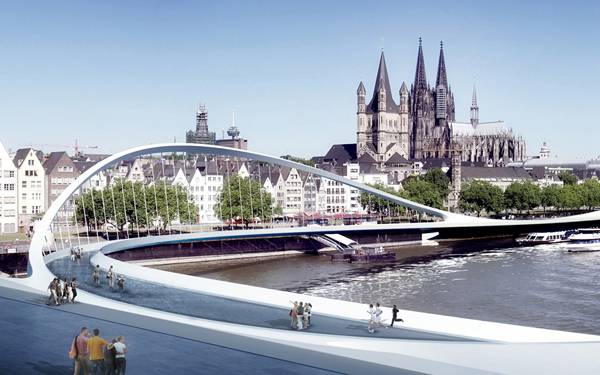 The RheinRing, to be located in one of the most significant public urban spaces of Cologne, would link the Hohenzollernbrücke and Deutzer Brücke bridges. It would represent the city’s new center, as well as be the link between the two halves of Cologne’s inner core. 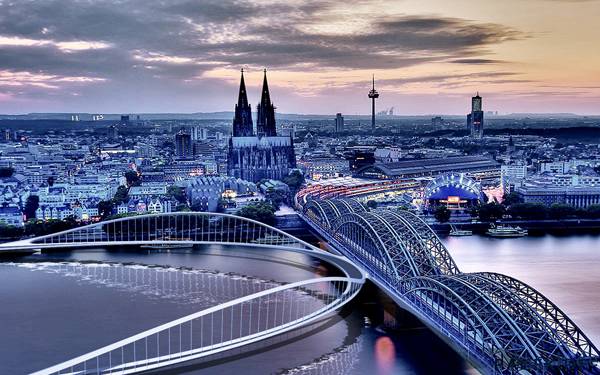 Hemmerling’s design, with a structural concept by Stefan Polónyi, would gird an area known as the Rhine Carrée, a section of the Rhine river bounded by the riparian hotels of Cologne’s east bank, the landscaped Rhinegarten on the tourist-friendly west bank, the Deutzer bridge to the south, and the famously padlock-laden Hohenzollern bridge to the north. Completing a loop touching all four of these landmarks, the RheinRing would connect the two halves of Cologne without adding an additional span to the river. By cantilevering from the riverbanks and existing bridges, the scheme would improve pedestrian flow throughout the core without the addition of new piers – an obstacle to river traffic – that a traditional bridge would require. The loop’s sinuous, rounded-rectangle shape, technically called a “superellipse”, draws its cues from nearby monuments, including the Lanxess Arena event center and the Ludwig. 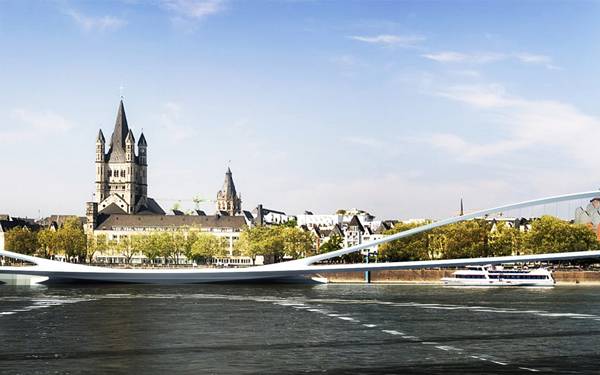 The track widens subtly at the four points where it makes contact with the riverbank and other bridges – the places where foot traffic is most chaotic – then tapers over the water, where pedestrian turbulence is minimal. The curving track would offer barrier-free access at its four fulcra, making it easy to amble on or off. The circular construction serves as an attractive pedestrian walkway directly accessible from the Altstadt — the historical city center — on the west and from Rhine Boulevard on the east, as well as offering access to the flanking Rhine bridges. 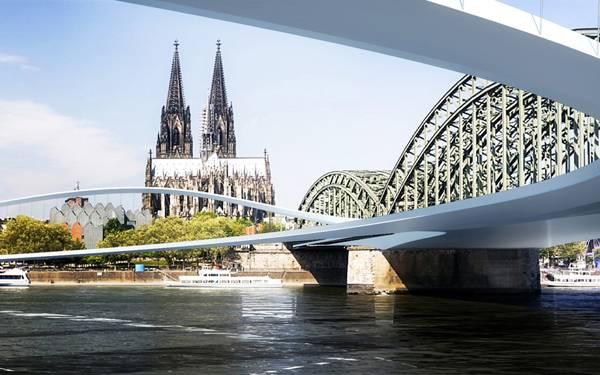 The free-floating ring above the river is a light arch construction that picks up formal references to the flanking Rhine bridges, as well as to nearby buildings nearby such as the Lanxess Arena, the main station building, the museum and the Sternwellen shade sail by Frei Otto. 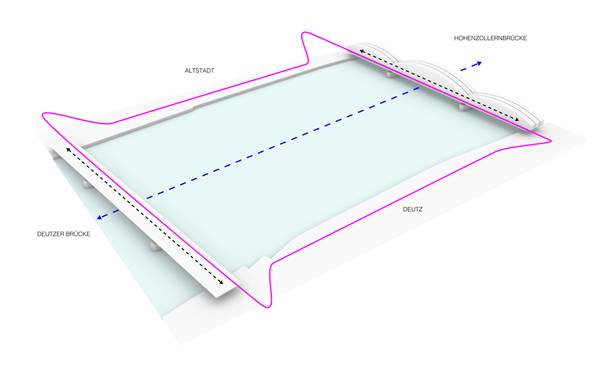 The geometry of the RheinRing is based on the mathematical model of a super ellipse, a flattened ellipse that mediates between square and round forms. The bridge above blends smoothly into the square of the Rhine Carrée and, following the same formal principle, forms wider and narrower areas that arise from the planned utilization. The cantilever arch bridge forms a barrier-free, inviting access to the water’s edge and the existing Rhine bridges. Here the new pedestrian promenade joins the existing route, forming a multi-layered road network. Since the support-free suspension requires no additional bridge piers in the Rhine Carrée, river traffic moving along the north-south axis would remain unaffected. The RheinRing would provide pedestrians and cyclists with a more intensive and innovative experience through the urban space. 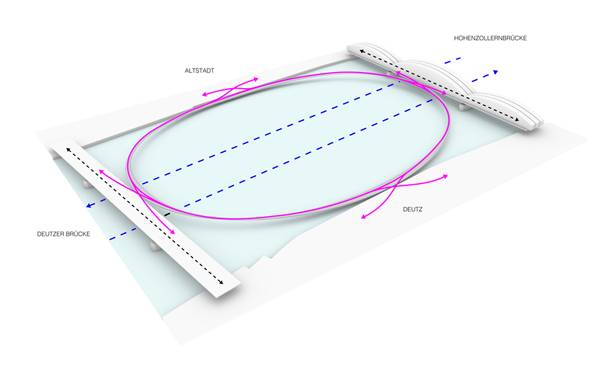 The additional urban space thus gained provides great potential for cultural events, sports, and leisure. By bridging the two sides of the Rhine, the design addresses the central questions broached in connection with the urban development master plan for the inner city of Cologne. 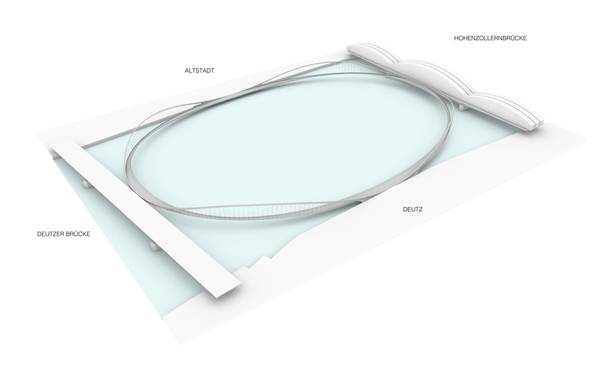 Here, multiple synergies are created in particular for the urban space Rhein, the core area, and the east-west link. The curving bridge also mimics the city’s characteristic ring structure, serving both the needs of traffic and for recreation as it forms a new stage for public life in the center of Cologne. 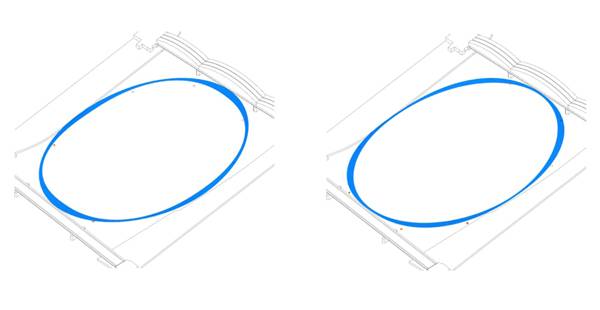 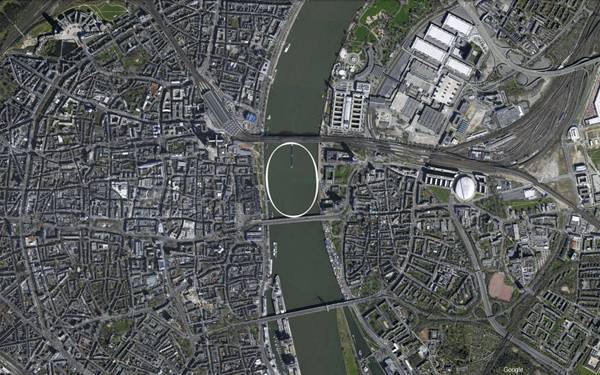 Thus, the RheinRing stands as a balanced and perfect elliptical loop of connections. Hemmerling has designed a wonderful, well-balanced masterpiece out of concrete with the help of structural Polonyi, making the RheinRing an icon in the inner city of Cologne — a cantilever hanging between the sprinkles and spray of water. It is not a wedding ring, but it holds much more than a relationship; it is a romantic, lovely place to spend time, laugh with loved ones, and enjoy the water. Recommended reading:  The World’s Most Amazing Bridges (Landmark Top Tens) by Michael Hurley Article written by Sha Sulaiman RETURN TO HOME PAGE Published in Blog