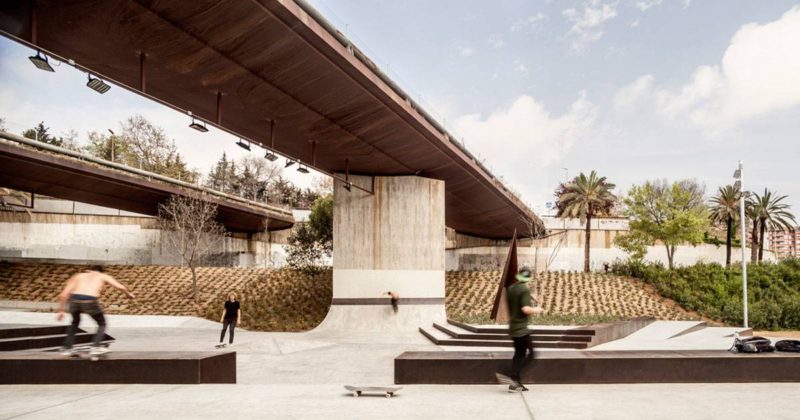 Article by Joanna Laska – Aurea Cuadrado Garden, by SCOB Architecture & Landscaping, in Barcelona, Spain. SCOB Architecture & Landscape can be incredibly proud of their project – AUREA CUADRADO GARDEN. This striking design is proof that even the most forgotten places can be turned into a must-see for thousands of people. For many years skate parks have been seen as invasive, unpractical elements of landscape design. There has always been a division between the sport activity and a relaxing public space. There seemed to be no compromise, no common ground between these two aspects. And so, up until not so long ago, skate parks were being designed as isolated areas.

Thankfully, though, designers and users of public spaces have started to see skate parks in a completely new light. More and more designers incorporate the idea of skate park ramps, hills, and balustrades into their designs. And all of them work perfectly! Even the roof of the national museum Przelomy in Szczecin, Poland has a construction such that skaters can use it. See? Even the most serious institutions now have designs that incorporate the needs of skaters. But what’s more important, people have started to realise that skate parks or at least skate equipment provides a great deal of fun, not only for the skaters but also for ‘regular’ users of the space, such as parents with children.

Aurea Cuadrado Garden is an absolute breakthrough in the area of contemporary landscaping. There is absolutely nothing (and no one) the architects at SCOB hadn’t thought about. The Garden is basically everything we would be looking for in a perfect city square. Once an old self-styled skating area under a series of deterrent bridges, the space had long ago been abandoned and forgotten. Thanks to SCOB the area has been turned into a space loved by everybody. The main aspect of the project is to limit the influence of the hard concrete bridge pillars. The presence of hard elements in an open space was definitely depressing. To soften the whole space, the architects decided to ‘connect’ the garden with the surrounding by continuous vegetation which acts like a green bridge between the square and its green surroundings.

It is absolutely vital for designers to keep in mind the needs of all of the site’s potential users, starting from parents with their children, through teenagers and the elderly. But other than that, it is crucial to also try giving the site the opportunity to encompass alternate possibilities of use. And this is exactly what the designers at SCOB have achieved when designing the Aurea Cuadrado Garden, by giving it the characteristics of a city square, a green corridor and also… a skatepark.

This project wasn’t the easiest one, as there are many ground restrictions (bridge pillars, walls etc.), but the architects did a great job at working with these limits. SCOB took advantage of the gradients and the containment of the slopes, as to create a place for the stairs, ramps, benches, handrails, platforms, and inclined planes. All of these elements are perfectly balanced and a strong stylistic relation has been created between them. Generally speaking, one element could not exist without the other. Not only is there a balance between the objects of the infrastructure of the square, but also between the large scale design aspects of the whole.

The Aurea Cuadrado project has become a strong and highly popular place in Barcelona. There are many aspects as to why people have chosen to love this place so much, but apart from looking exceptionally good and having a lot of functional propositions, the Aurea Garden has become much more than just a city square. Since its introduction for public use, Aurea Garden has revealed its openness of design to the skaters. With countless ramps, handrails, platforms and steps, this design matches the idea of “Landskating”. As the designers at SCOB have said themselves, “the programme of the project presents this new skatepark as a skate-square”. This skate-square has been made possible because it took the site’s limits as potential advantages and possibilities for fun elements. You can watch the short documentary on “Landskating” here. Do you think it is a good idea to incorporate skating and fun elements into open public spaces?