Valencia seized the contemporary landscape architecture spotlight on 2011 when Gustafson Porter won an international competition to design Spain’s 60 hectare Valencia Parque Central. While that high-profile project is under construction, I’d like to bring your attention to another very important green space that already exists in the city of Valencia: the Turia River Garden.

The Turia Garden is an exceptional example of world-class landscape architecture. A linear park that stretches 8 kilometers long and 200 meters wide, this massive garden traverses the entire city, from La Huerta in the west to the docks in the east. This lush green park is one of Valencia’s most distinguishing features and can be likened to a big green crack in the urban fabric that offers reprieve and a straight path from the Mediterranean waters to the back country. 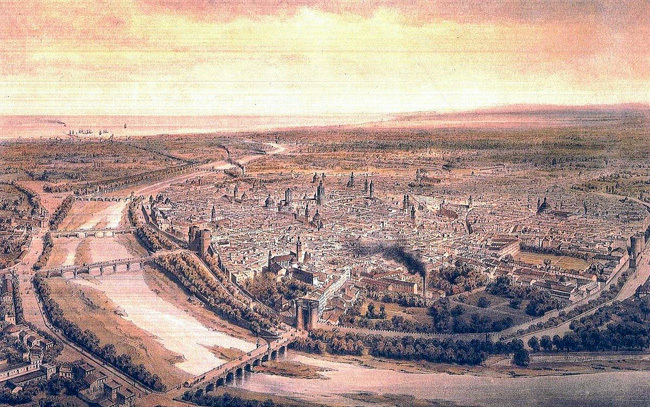 Behind Turia’s stunning appearance, however, lies a rather uncommon and tragic story. In 1957, a great flood overflowed the river Turia and caused numerous deaths and injuries. Officials were forced to divert Turia’s natural riverbed and create an artificial channel and a new mouth. Initially, an urban highway was planned to be built overtop the old river, but the 1970s rise in democracy and open protest changed those plans. Opponents to the highway shouted “El llit del Túria és nostre i el volem verd!” (The bed of the Turia is ours and we want it to be green!) and their efforts successfully transformed the old riverbed course into the great green space and hallmark of Valencia. 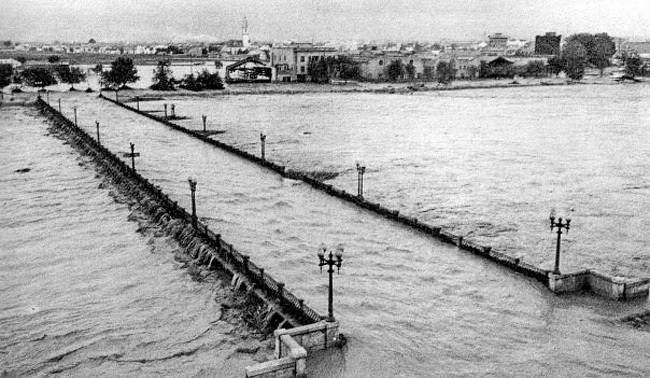 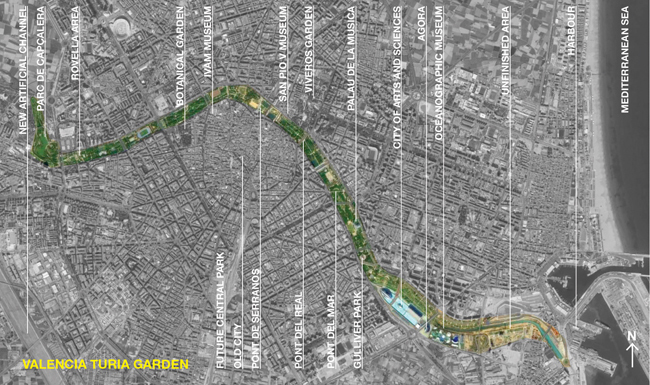 The colors, aromas, water, and lights of Valencia dance and peek through through the trees and plants as we walk through the linear park. These glimpses of Valencia’s urban fabric accompany us on our journey down the car-free Turia, where people are free to walk, run, cycle, or just sit on a bench and people watch all day. The Turia Garden is the largest green lung and open air leisure space of the city and attracts thousands of tourists to Valencia. Once inside the park, it seems like everyone–the young and the elderly, lovers and families, children and athletes–can coexist peacefully in the same place. 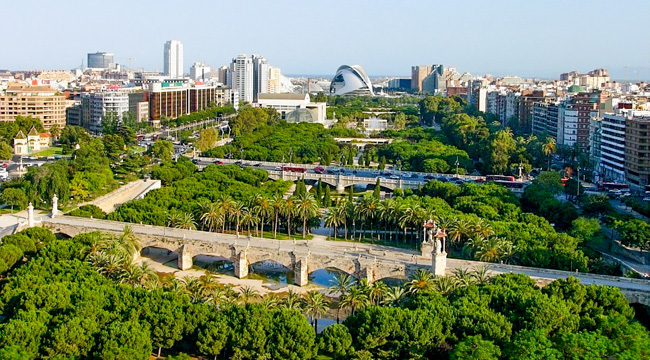 View towards Mediterranean Sea in the east 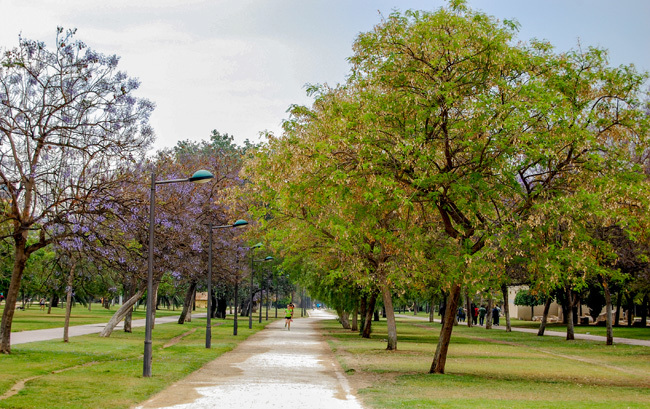 Walks in the garden

Spending a day inside Turia Garden is like walking past 100 gardens at the same time. Due to the great length of the park, Turia was developed in phases, which led to the creation of a variety of landscape styles,  all of which are united by the presence of water. The different sections are designed by Landscape Architects with very different views of landscape and gardening. In some parts of the garden, the water is used as a historical element to conjure up images of the former river. In the area of Rovella irrigation dam, for instance, the water is set as the backbone of the garden, where it cuts through the garden and mimics the path of a river. In the section where it integrates with the Palau de la Música, however, a sense of the monumental Roman tradition of public space is perceived and Arabic-style landscaping, water design, vegetation and shade are used. 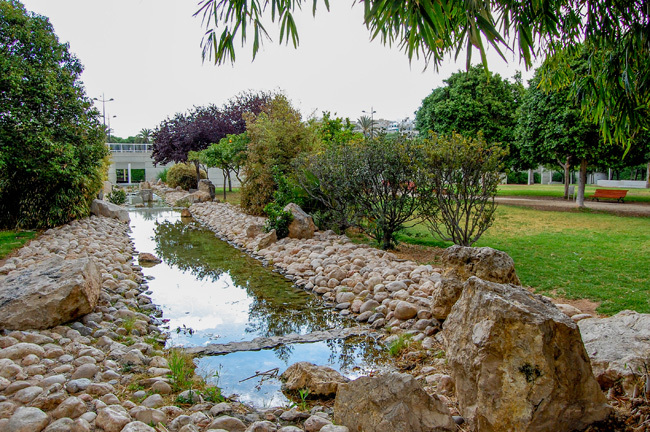 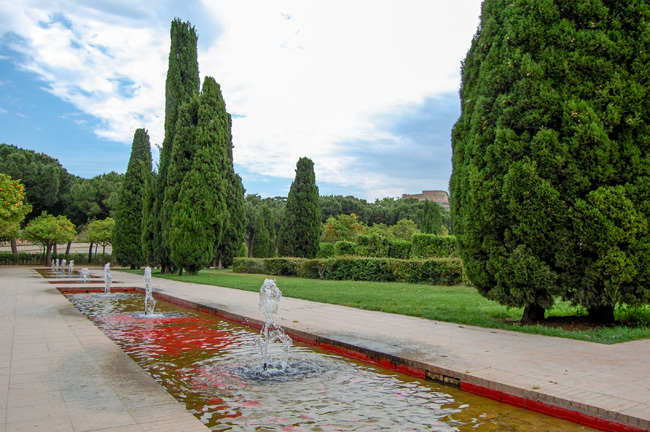 In other areas, an environmental approach was used to recreate the typical Mediterranean river ecosystem complete with a rich forest of surrounding pines, cypress, elms, palm trees, lindens, mulberry trees, willows, and other species that invite you to view a landscape of hills and trails. Hundreds of species both native and exotic create a splendid space from both a botanical and environmental point of view. Rose and perennial gardens, ponds, labyrinths are inserted amongst these Mediterranean forests. The “bottle tree” forest depicted below, for instance, is one of the more strange and eye-catching horticultural delights in the park. 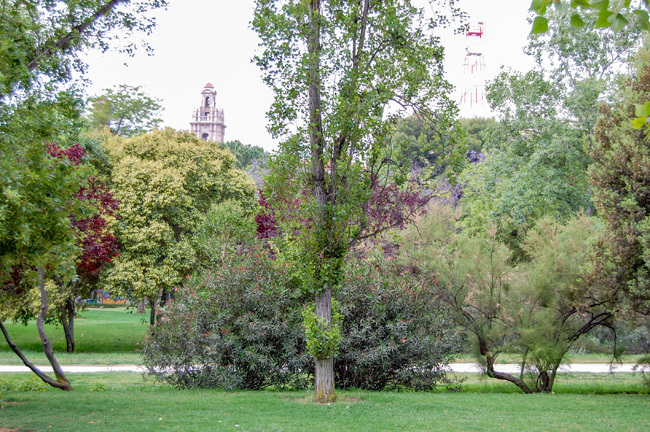 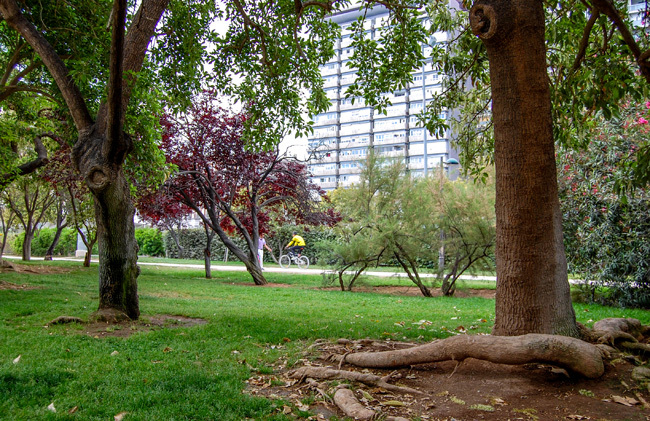 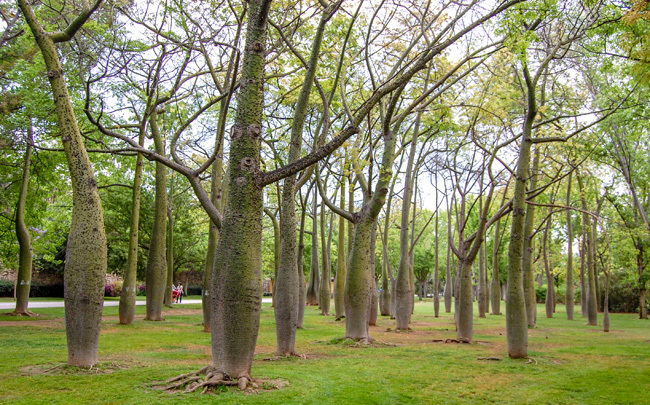 One of the last major sections of the park is the Parc de Capçalera (Header Park). Located in the northwest corner next to the new zoo, this section features a large pond for stormwater management that connects with the Turia River Metropolitan Park upstream. The Parc de Capçalera is an idealization of the natural ecosystem of the river with the typical vegetation of riparian areas. Here a large hill allows us to look toward the Huerta of Valencia and the topography of the surrounding mountains. 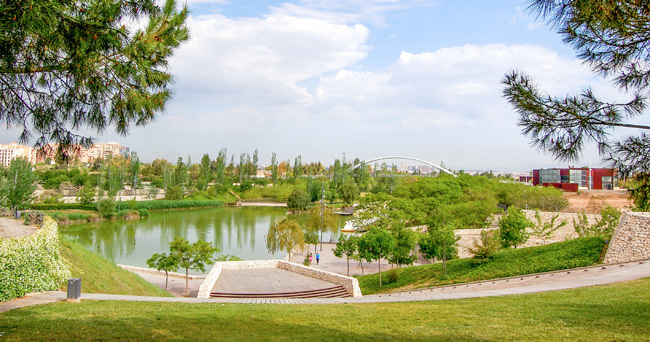 “Parc de Capçalera” in the west beginning of Turia Garden

Architectural highlights are scattered throughout the park, such as the numerous medieval bridges connecting both sides of the channel. These authentic monuments to the city offer us a greater glimpse into Valencia’s history. 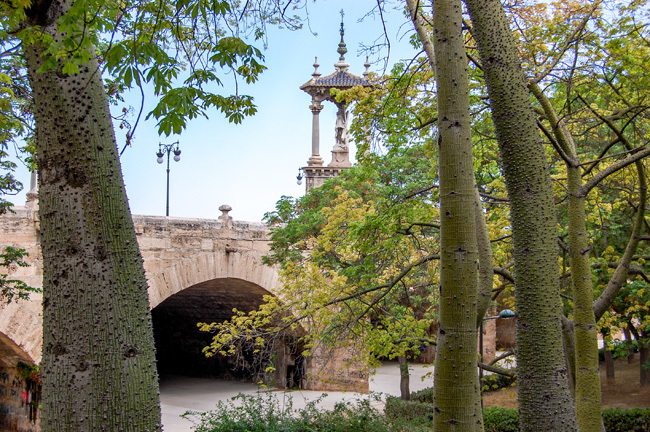 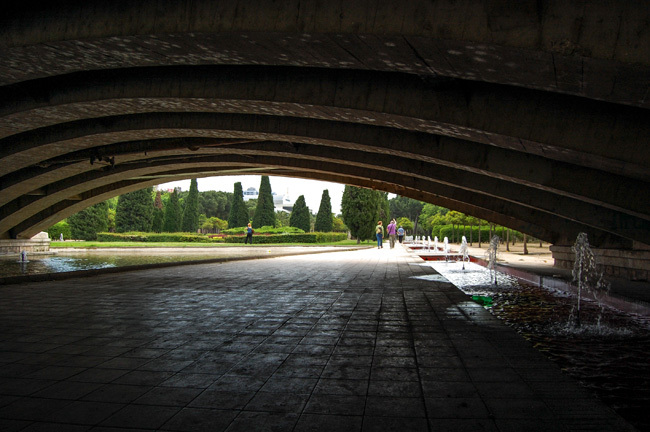 The Turia Garden is a space that articulates numerous facilities and monuments in the city, not only in the margins (IVAM Museum of Modern Art, Pio V Museum of Fine Arts, medieval towers of Serranos, ancient gates and walls of the city, the Botanical Garden and Viveros Gardens, shopping malls, government buildings, the Palau de la Música, the zoo, just to name a few…) but also inside the channel where there are sports fields, attractions for children, or the already well known City of Arts and Sciences. 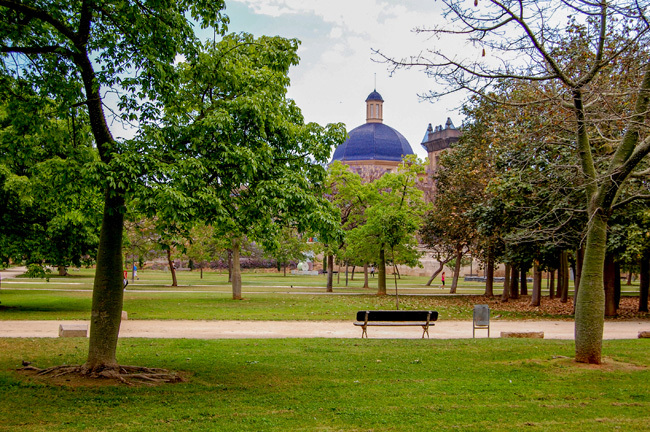 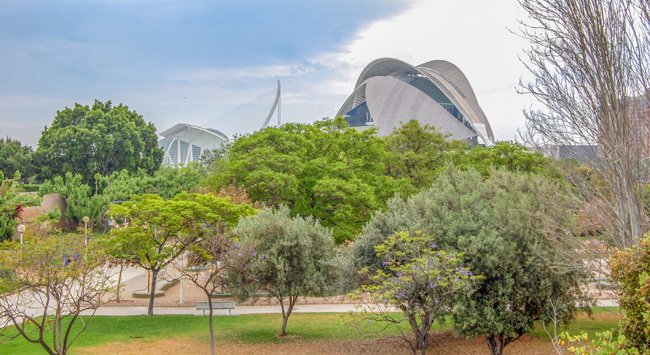 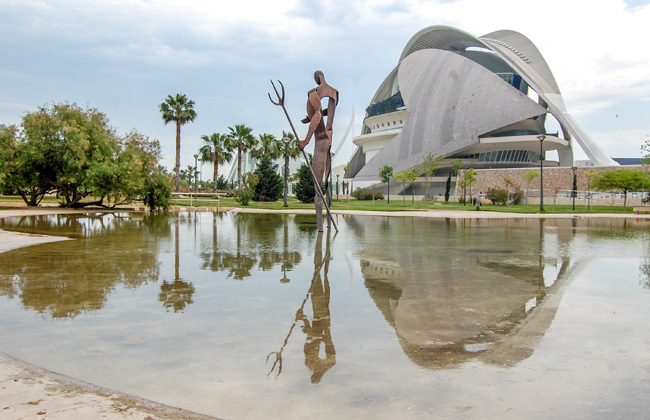 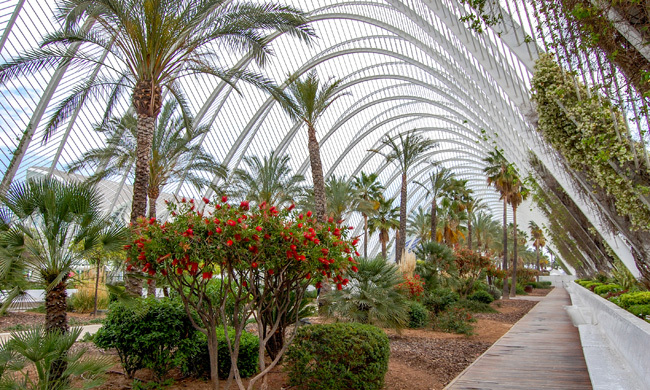 City of Arts and Sciences

Once you spot the giant blue “Agora,” you’ll know that you’ve reached the end of the journey in the park–at least for now. The east end of the Turia Garden is still undergoing construction, and when finished, will finally link the city and the river with the Mediterranean Sea. 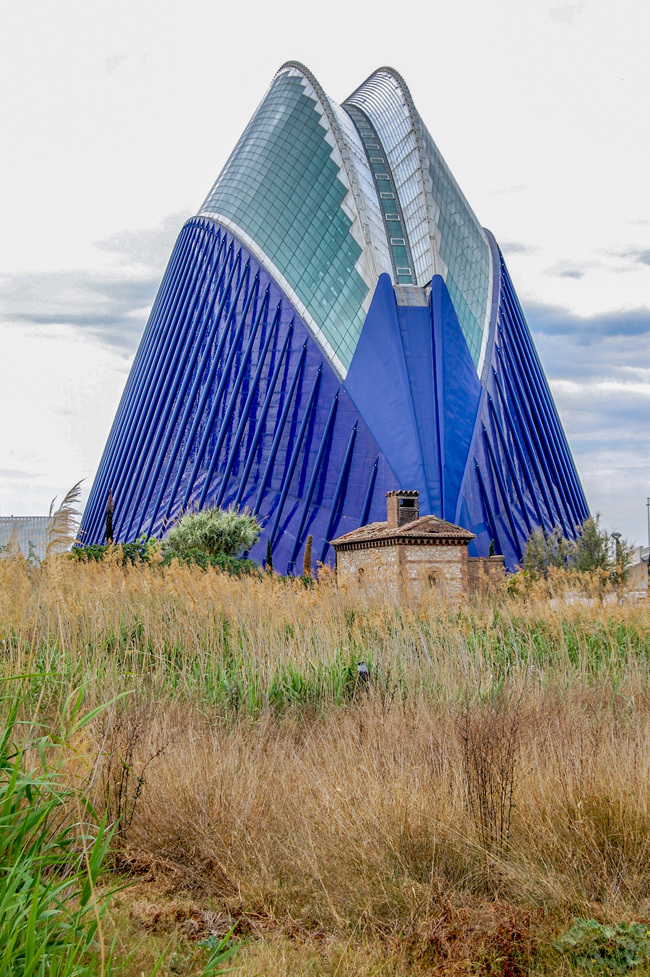 “Agora” in the east end of Turia Garden

Sixto D. Lozano is a Landscape Architect in Valencia, Spain 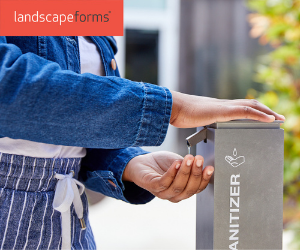