Article by Sophie Thiel We explore 10 f the best tourist spots for landscape architecture in Africa and see what adventures await us. The word Africa conjures an image of vast landscapes of yellow savannas, the moist essence of broad rain forests, and the hot, dry air of the Sahara Desert. Africa is a continent with enormous natural abundance and richness in various ecosystems – some of them unique in the world. However, despite the fact that there are more than 300 national parks on this continent, most of Africa’s countries are still developing and are not known to be appreciative of the young profession of landscape architecture. A herd of elephants in the morning in Serengeti National Park.By Bjørn Christian Tørrissen – Own work, CC BY-SA 3.0

If you manage to visit Ghana, don’t miss the Kakum National Park, known for its long series of hanging bridges at the forest canopy level that provide access to the forest. The canopy walkway of Kakum National Park is the oldest of its kind in the entire African continent. At a height of 40 meters, visitors can view plants and animals from a vantage point that would otherwise be inaccessible to humans. The canopy walkway passes over seven bridges and runs over a length of 330 meters. There are also six treetop platforms where you can rest, enjoy the spectacular views, and scout for the animal inhabitants of this equatorial rainforest ecosystem. Since the Kakum National Park is inhabited by seven primate species,including the rare Diana Monkey, and more than 500 species of butterflies and about 250 species of birds, the chances of an encounter with these animals are high. 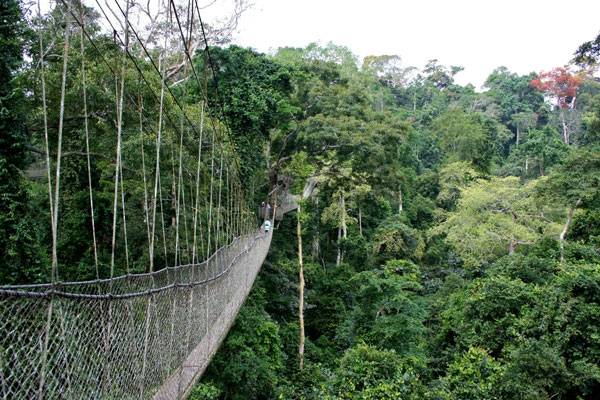 The Walter Sisulu Botanical Garden preserves the natural vegetation of the area that is known as the Rocky Highveld Grassland and consists of a mosaic of grassland and savanna, with dense bush in kloofs and along streams. The variety of habitats accommodates more than 600 naturally occurring plant species and is also home to an abundance of wildlife, with more than 220 bird species recorded on site. A few years back, a pair of majestic Verreaux’s eagles built their nest on the cliffs alongside the waterfall of Sisulu Botanical Garden. They come back to breed every winter – a great attraction for visitors. Since the garden has been voted the best place to get back to nature in Gauteng for nine years in a row – according to the South African National Biodiversity Institute – a visit to this site seems to really pay off if you stay in Gauteng area.

View of Table Mountain from Kirstenbosch Botanical Gardens. By Didier B (Sam67fr) – Own Work – Panorama made of 3 pictures taken by me, CC BY 2.5

This project is probably one of the oldest projects of modern African landscape architecture. It tells the tragic story of the car bombing of the United States embassy in Nairobi on Aug. 7, 1998, that killed 218 innocent people and injured thousands of others. The Memorial Park today functions as a tribute to the victims, but also as place of outreach to the public, to educate visitors on the appalling consequences of terrorism and violence and the need for peace, tolerance, and reconciliations. The small park comprises a landscaped garden, a wall commemorating the names of those who died, a sculpture made from the debris of the blast, and a visitor center. If you happen to visit South Africa in springtime, don’t miss the annual Spring Festival of Gauteng that runs between July 29 and Sept. 4. The exhibit is divided into four sections: forest, savanna, fynbos, and mountain ravine. This year, 22 gardens will compete for best in show. An additional highlight is the recreation of the Kirstenbosch South Africa Chelsea exhibit, which won Gold at the Chelsea Flower Show in London in 2016. Other annual attractions at the festival are the school gardens, children’s box gardens, and floral exhibits of the Gauteng Flora Union and Interflora. The whole event will surely delight both landscape architecture lovers as well as tourists who visit South Africa. 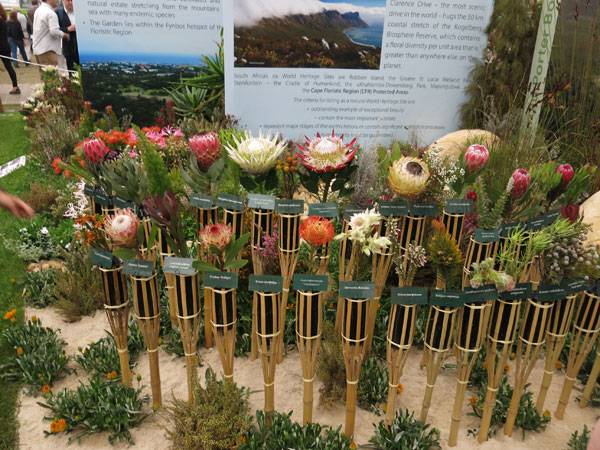 This picture shows an extract of this year’s Kirstenbosch South Africa Exhibit at the Chelsea Flower show. photo by Maria Schallar, 2016, private source.

Agodi Park and Gardens has developed from an underused site to a promising leisure park that maintains environmental integrity. The team of designers focused on creating healthy outdoor activities within the unique savanna and forest environment of Ibadan. Although the project is not yet complete, the park has already proved to be extremely successful and is very popular with both locals and tourists. Agodi Gardens’ placement within the city provides an important landmark, creating a sense of cultural identity through place-making and offering an active hub both day and night. This project was also featured in our article: Agodi Park and Gardens Creates a Green Gem in the Middle of the City

Freedom Park is set up on the hill overlooking Pretoria – one of the three capital cities – offering visitors a panoramic view of the metropolis. Here, visitors are invited to keep watch over the maturing democracy and here, the story of Africa –and the liberation of South Africa and its people – is told. The local landscape architecture firm Greeninc designed Freedom Park to be a place of peace and growth. “[The] garden is a tribute to African and human dignity, and a place for the renewal of the human spirit…” the website says about the meaning behind this project. A mixture of architecture, landscaping, sculpture, archives, and imagery is used to distinctively explain the history and heritage of this region. This is truly a must-see project and one of the best examples of contemporary South African landscape architecture.

The Centenary Tree Canopy Walkway, called Boomslang, in Kirstenbosch National Botanical Garden is a surreal, snaking bridge that creates a meandering, aerial path. By carefully hoisting the steel beams over the canopy, the designers were able to give people an amazing new way to appreciate the forest of the arboretum while causing minimal disturbance to the natural environment. Additionally, the Kirstenbosch National Botanical Garden clinched the top 2015 International Garden Tourism Award, crowning it as the best botanical garden in the world.

This project was also featured in one of our articles by Tania Ramos Gianone, Sensational Winding Tree Canopy Walkway

Al Azhar Park has risen like a phoenix, but from hills of trash instead of ashes. A great urban initiative helped to transform the site from a 500-year-old municipal garbage dump into a revitalized, natural public park with an array of amenities. The experienced designer team of SITES International insisted on integrating traditional Islamic landscape traditions in both the design and the choice of greenery, allowing the past flow of the city to come back to life. In addition to the environmental rehabilitation, a cultural and historical restoration was taking place, leading to a skillful use of the site’s location, elevated topography, and unique vistas overlooking dense, historic Cairo. Furthermore, Al-Azhar Park was named one of the 60 greatest places in the world by the renowned Project for Public Spaces. Does one need any more reasons to visit Cairo’s Al Azhar Park? The line between the outside and the inside becomes blurred when it comes to exclusive lodging in national parks and game reserves throughout Africa. This is also the case in the Singita Lebombo Lodge, which lies in the Kruger National Park of South Africa. Here, architecture and its surrounding landscape merge into one joint object sharing materials and magnificent views. The Singita Lebombo Lodge offers its visitors the feeling of being one with nature, while at the same time scoring with its design choices. Lodges such as this are ideal for anyone who wants to get an ultimate, close-up experience with African national parks without relinquishing luxury and comfort. 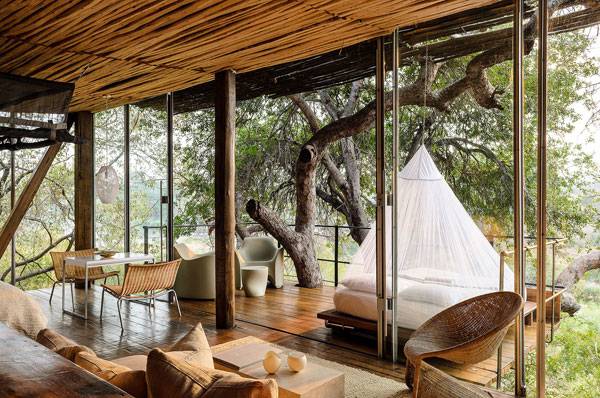 One of 15 loft-style suites at Singita Lebombo Lodge. Photo by Jessica138, source

Majorelle Garden is a real tourist magnet in Morocco, due to its fascinating design. The garden was created over decades by the artist Jaques Majorelle. On various trips around the world, he acquired hundreds of rare varieties of trees and plants, which he arranged between light and shadow around a long central basin and along irregular, meandering walkways with curved, painted walls. Majorelle had a particular liking for the use of primary colors, and it is those colors that transform his garden into a masterpiece. Nowhere else you can find this special shade of cobalt blue used as extensively as in Majorelle’s wonderful garden. As this article shows, Africa offers quite a lot of landscape architecture-related projects worth seeing. Even if our profession is only in the beginning stages – with few exceptions – on this beautiful continent, all of the 10 projects on this list give hope that landscape architecture will have a bright future in Africa. With our interest in this topic and especially through better networking with Africa’s landscape architecture firms – that are mostly yet to mature – we can further support the positive development of our profession on this continent. I hope you keep that in mind wherever you travel. Keep your eyes open and have fun on your trip to Africa. Which projects do you want to visit immediately? What other designs do you think are you missing from this list? Let us know in the comment section below!