Fans of experimental urban design will love Landscape Institute’s recently unveiled winning proposals from the Creating Healthy Places Ideas Competition. The eight winning designs offer visionary and creative proposals on how to better connect green infrastructure with public health. In addition to layering ecological functions with recreational ones, many of the proposed projects explore the use of underutilized public space, from cemeteries to a swimmable River Thames. Keep reading to see the 8 winning entries!

As more and more people flock to cities, demand for livable urban conditions and green space are higher than ever. As highlighted in the Landscape Institute’s five principles for the creation of healthy places, parks and landscape architecture projects have a proven effect on boosting public health. Now that green infrastructure and pedestrian-focused designs–once considered cutting-edge–have been accepted as the gospel of placemaking worldwide, the Creating Healthy Places competition challenged the new generation of visionaries to create new and unexplored ideas for healthier living. The winners presented their ideas at the Garden Museum’s Healthy Landscape Symposium on April 30 as part of their Green Infrastructure week. 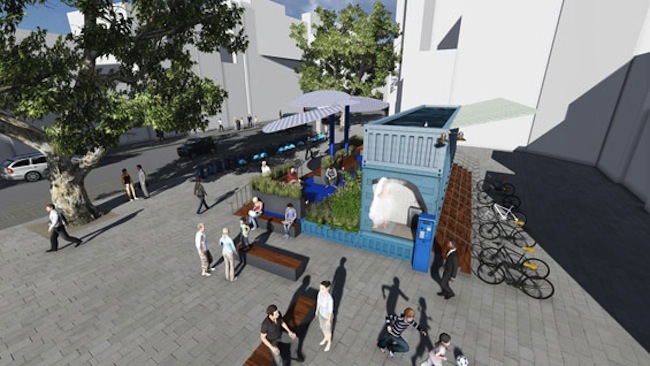 Voted as the audience favorite in Garden Museum’s Green Infrastructure week, the Soapbox is a rainwater-fed commuter and social gathering hub. Built from recycled shipping containers, Soapbox is designed to offer pedestrian and cyclist commuters a chance to freshen up on their way to work. The modular design collects rainwater into a storage tank that pumps water into shower units. Decorative solar panel sculptures offer shade and generate electricity for the showers and the onsite Wi-Fi. Gray water is used to irrigate the gardens planted next to public seating. 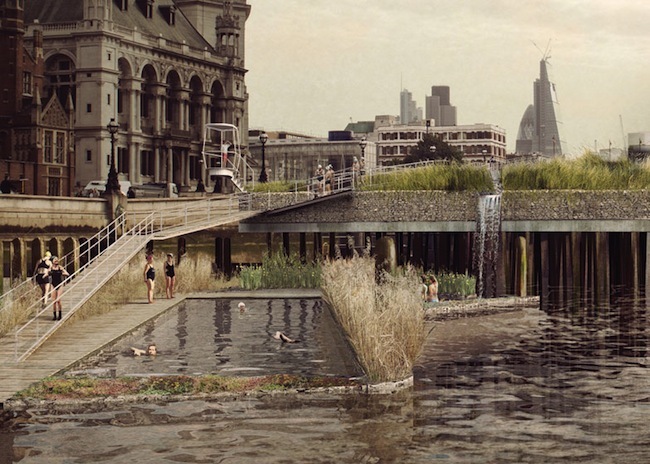 Studio Octopi, JCLA, and Civic Engineers proposed a concept for a swimmable River Thames to restore access to London’s largest public space. The design consists of a pair of contained pools located in the tidal waters of the river and surrounded by lush vegetation. The public swimming pool would be replenished with fresh and clean river water during high tide. The Thames Bath Project won second place in the audience vote. 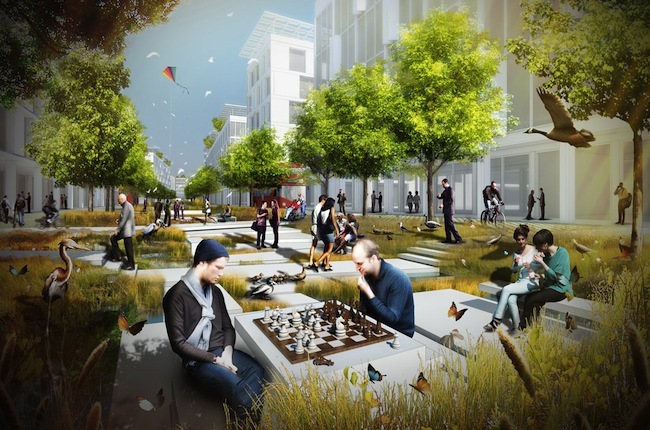 Also a runner-up in Landscape Institute’s Royal Docks competition, Water Boulevards addresses the problem of flooding and pollution in London’s Royal docks with accessible green infrastructure. The proposal transforms the Royal docks into a series of lush floating public spaces that connect communities together. The linear aquatic park collects and filters rainwater through swales and vegetation, while providing wetland habitat to local fauna as well as a functional and recreational space for residents. The Water Boulevards won third place in the audience vote. 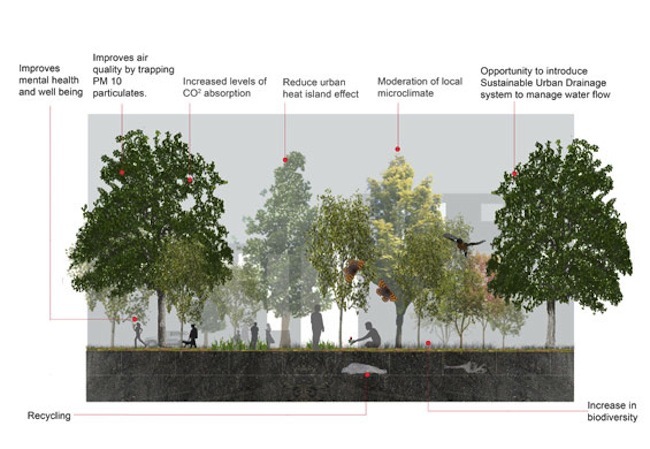 The Green (Burial) Infrastructure revisits the idea of cemeteries as green infrastructure and public space. While cemeteries today are often pushed to the fringes of the city, this proposal suggests ways to reintroduce cemetery grounds as an attractive recreational space for the living. 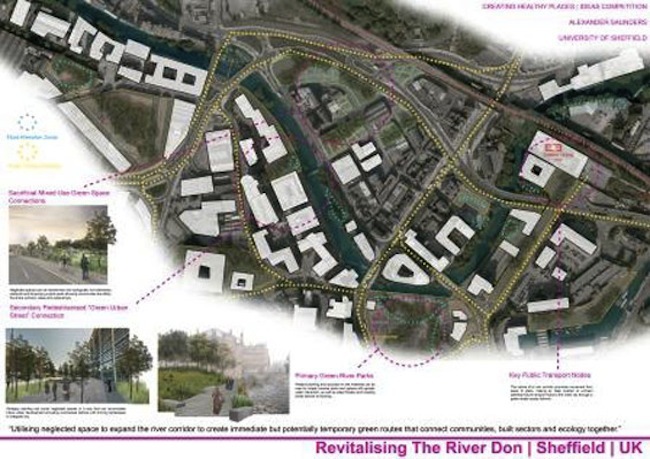 Revitalizing the River Don by Alexander Saunders, University of Sheffield

Landscape designer Alexander Saunders’ winning proposal takes a macro look at the city from the planning scale. The design looks at ways to reintegrate the River Don, which cuts through the heart of Sheffield, into the urban fabric. Saunders suggests quick to install and mixed-use landscapes along the river. 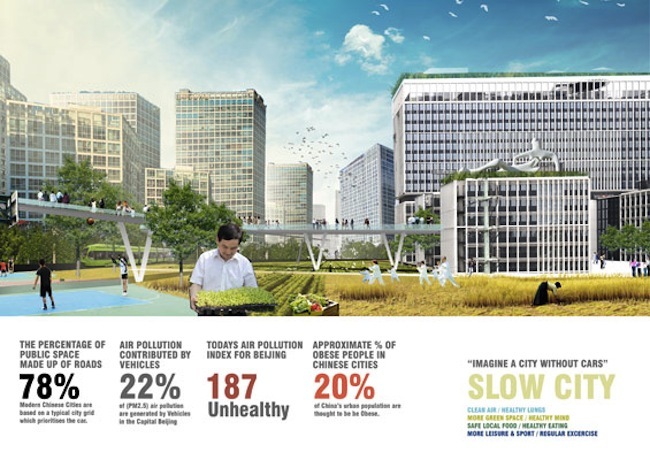 Were London to suddenly become car-free, the city would certainly have a lot more pedestrian-friendly public space from all the freed up roadways. Although this vision isn’t exactly feasible, Slow City explores the possibilities of a car-free city and highlights the benefits such as better air quality and locally grown Food Parks. 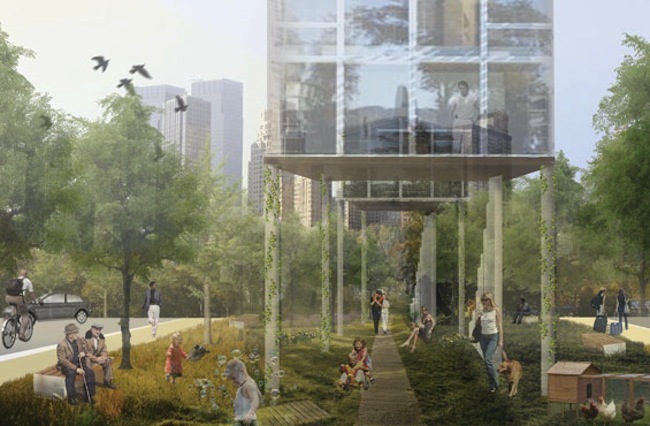 “The park is where we can meet friends, children play, we relax and take a deep breath, feeling escapism among the trees,” writes the designers. “What if we brought the park literally to our front door? What if we reclaimed private, residential streets as local community space?” Like Slow City, the concept of street-turned-public-space is a central theme to Park Life. 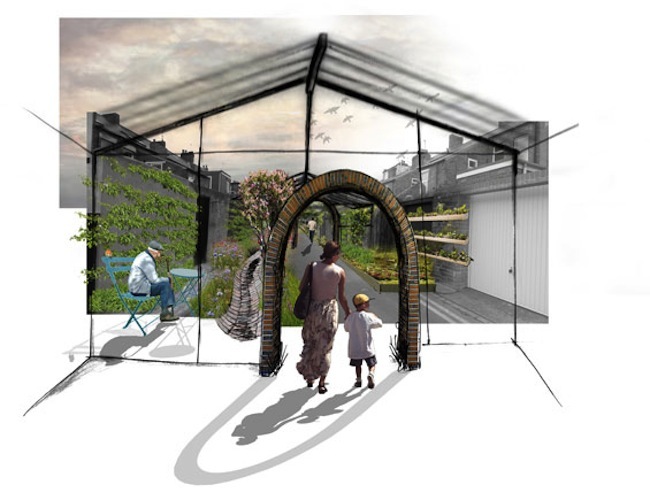 Arcadia Culture combines the built environment with landscape. In this proposal, London’s famous terraced houses are modified to include greenways that weave through the buildings, bringing community members together into shared green public spaces.