Atlantic Park by Battle I Roig Arquitectes, Santander, Spain. Atlantic Park is a recently constructed urban park in the city of Santander, on Spain’s northern coast. The design, by Batlle I Roig, combines elements of ecological restoration and urban community parks. Batlle I Roig Arquitectes is a multidisciplinary architecture, planning, and landscape design firm based in Barcelona, Spain. The firm’s portfolio boasts a huge variety of projects, ranging from large-scale environmental restorations to the design of schools and social housing. 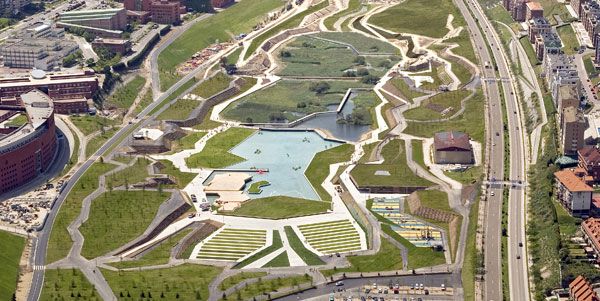 When it comes to landscape, the firm combines its philosophy of ecologically sustainable design with its signature clean and contemporary aesthetic. Its work often includes unique architectural elements integrated seamlessly into the landscape. The Effects of Human Intervention The Vaguada de las Llamas is a low, marshy riverbed area. Once a river that flowed into the Atlantic Ocean, as the city of Santander grew and expanded, the Vaguada de las Llamas was cut off from the coast by the development of the surrounding areas.

The remaining area — the river’s deepest section — was not suitable for development and was simply left as a low, wet area. Ironically, this human intervention ended up creating a unique ecology onsite. The marshy, stagnant riverbed created by blocking the river’s flow was colonized by unique species of reeds. However, as the city continued to grow, the area became increasingly inaccessible and invisible to the public. With a major highway at one end of the site, it soon became an ideal place for dumping. The site fell into a state of complete neglect, polluted and degraded. 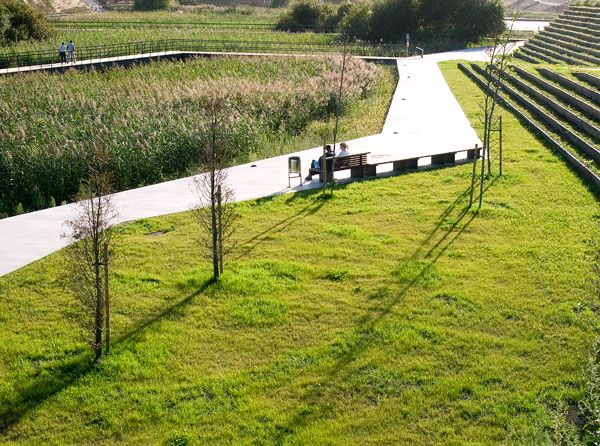 From Community Dump to Community Park Not suitable for development, but also unacceptable in its current state, the area was set aside by Santander’s City Council for redevelopment into a park. One purpose of the redevelopment was to address the immediate environmental issues on site. The site had become not only an eyesore, but extremely polluted and degraded, risking loss of its unique biodiversity. 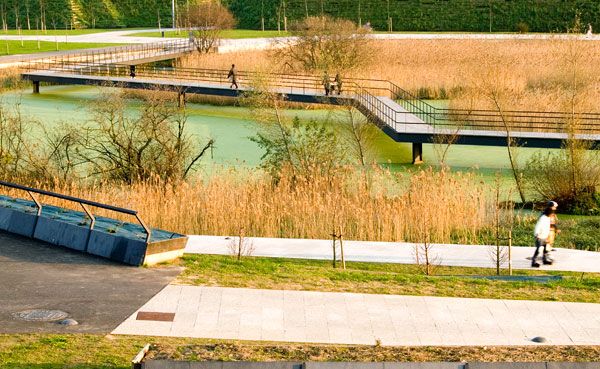 The site also holds a significant position in the city. Adjacent to a university campus and residential neighborhood, the site had the potential to become a focal point for the surrounding communities. The Design Challenge The challenge for Batlle I Roig was to come up with a design that addressed the community needs while still protecting the ecology of the site. To achieve this, the park has been divided into different zones.These three areas are each characterized by their use, character, and planting scheme and are divided by the park’s topography. 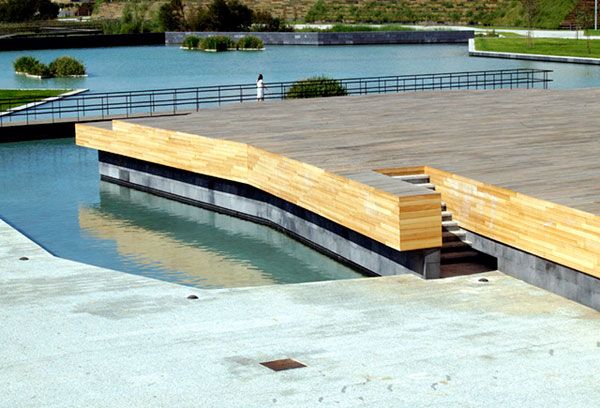 The lowest areas, including the riverbed itself and an artificial lake, are not directly accessible to the public and are filled with wetland plants. Visitors can get close to these areas via the raised walkways that cross through, without disturbing these ecosystems. 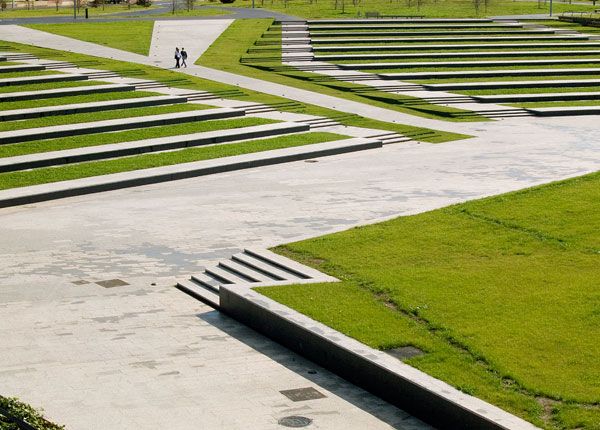 The highest level is dedicated primarily to human use, with paths, playgrounds, and grassy areas. This area includes unique features such as an outdoor amphitheater and botanical gardens, making it a great area for university and community gatherings. Between the two is the sloping transitional area, called the “Atlantic zone.” This area acts as a protective buffer between the ecological and community areas, as well as a space for existing plants to expand and colonize. This area is accessible to visitors but emphasizes passive recreation, with seating and pathways. Opening up the Riverbed The network of pathways, raised bridges, and bicycle paths have opened up the site, facilitating easier movement between the university campus and the nearby residential neighborhoods while leaving ecological integrity of the site intact. Other Related Articles:

An artificial lake was also created as part of the design. The lake acts as a reservoir for runoff, an expansion of the marshy habitat, and as a visual focal point in the park. 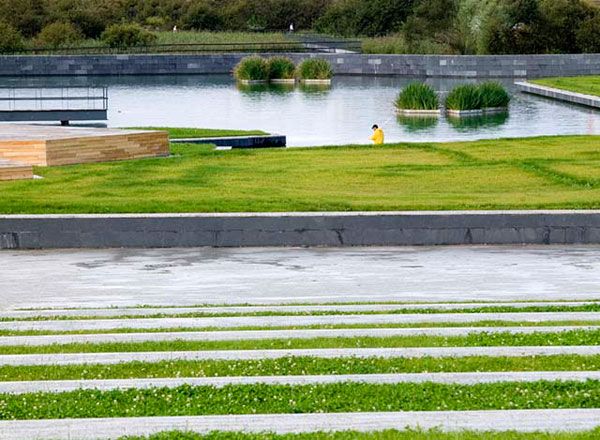 Inspired by Nature The park’s planting scheme is adapted specifically to both regional and onsite conditions, emphasizing plant species native to the Atlantic coast. The layout of the park is highly deliberate, drawing inspiration from the morphology of the Atlantic Ocean and coastal ecosystems. Even the pathway configuration makes reference to trading routes crossing the Atlantic Ocean. 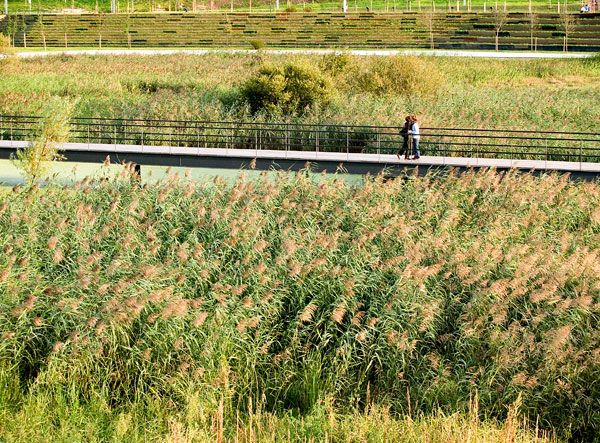 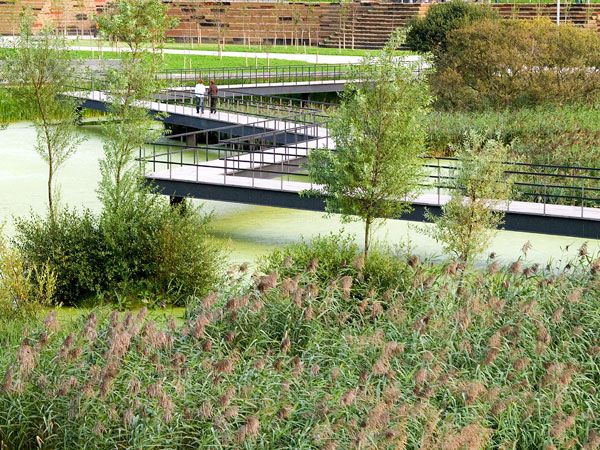 Overall, the park leaves quite a visual impression. The contemporary architectural elements, including the pathways and bridges, are contrasted with an extremely naturalized setting. Simple materials in bold forms create a unique experience for the user.

Batlle I Roig’s design for Atlantic Park aims to transform an unused and unloved dumping ground into a vibrant public space that serves the community’s needs while still protecting the area’s unique ecology. The new design has significantly opened up access to the Vaguada de las Llamas riverbed, letting locals access what was closed off for decades and putting a stop to much of the illegal dumping that had degraded the site for years. The project is a reminder that human and ecological use don’t necessarily have to be at odds with one another. As designers, finding creative ways to balance our responsibility to the environment with community needs is key to creating successful and sustainable urban spaces. Awards: Finalist for the FAD 2007 Awards Recommended Reading: