LAN returns with a new edition in the Top Ten Sketches series. Every time we seek to select the most imaginative and crafty work by our readers. So check out our new edition!     10. by Simon Bussiere 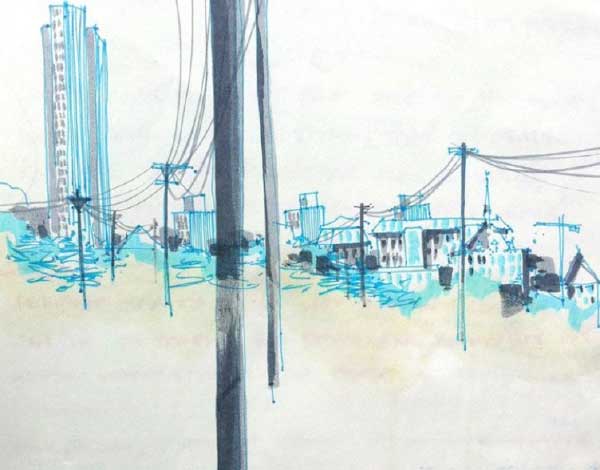 View from the train station in Albany, New York by Simon Bussiere

This is a view from the train station in Albany, NY. A 10 minute sketch, it started with a nice grease spot from a pepperoni that fell off a slice of pizza I was consuming! The sketchbook page was tilted slightly and the meat slid a few centimetres across the page, starting the light brown streak in the centre of the sketch. I ate the pepperoni and proceeded with my cyan Le Pen to outline the city horizon, then used a light grey, dark grey, and cyan Tombo marker to add some tonal value. 9. by Mahafuj Ali 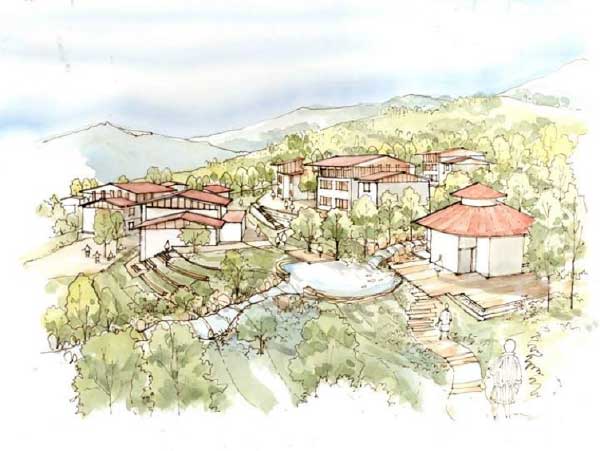 Sketch of a proposed school hostel in Bhutan by Mahafuj Ali

The sketch was an impression of a proposed school hostel in Bhutan. It was designed  in a way which should not overpower nature, but blend in with its surroundings. 8. by Martin Vysoký 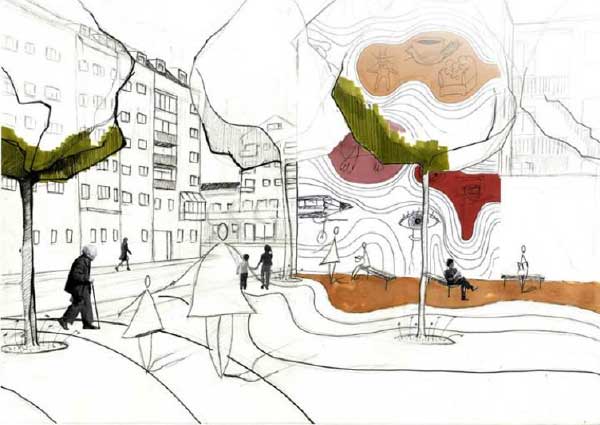 Conceptual sketch from an experimental course by Martin Vysoký

This sketch is the output from an experimental course I participated in. Design is truly conceptual. It’s a way to create identity for local people who inhabit that area (in this case a courtyard) through participation in public art before anything is built and finalized. The sketches were later implemented into the final design. 7. by Morozova Lada 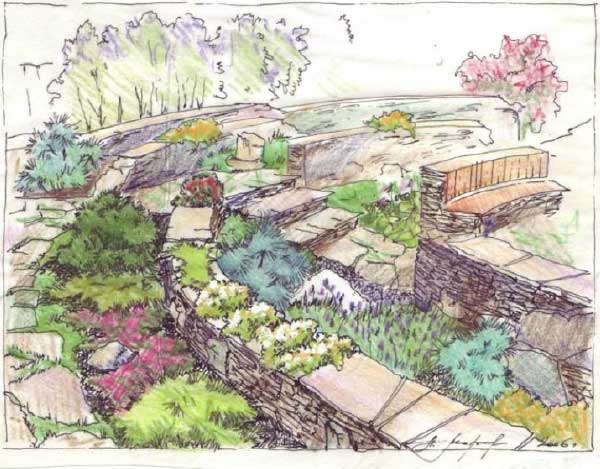 I wanted to design a very special zone for relaxing. It looks like ancient amphitheatre ruins. Oak sits on stone benches, surrounded by pine-trees, junipers and flowers giving a romantic feel. By day one could sun bathe and children could draw scenic sketches. In the evening  built-in lights are switched on and you could chat with friends, drink good wine, and eat grilled food. The owners say that it is their favorite place! 6. by Dan Willis 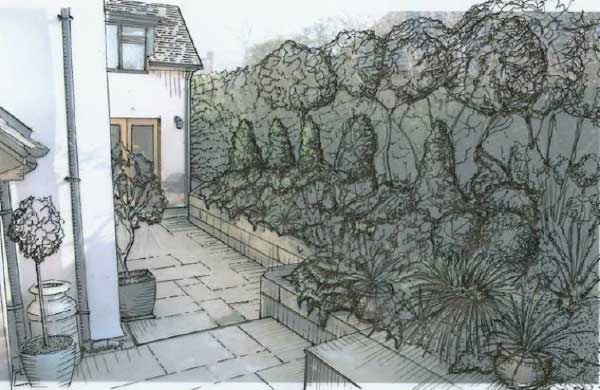 Design work for a house and its gardens in Cheshire, England by Dan Willis

This sketch was part of design work for a house and its gardens in rural Cheshire, England. For this particular area the owners wanted a Mediterranean style planted border with hints of native English species; the hard landscaping features reclaimed materials and natural stone. The drawing was created using a range of inks to add color and varying line weights. 5. by Simon Bussiere 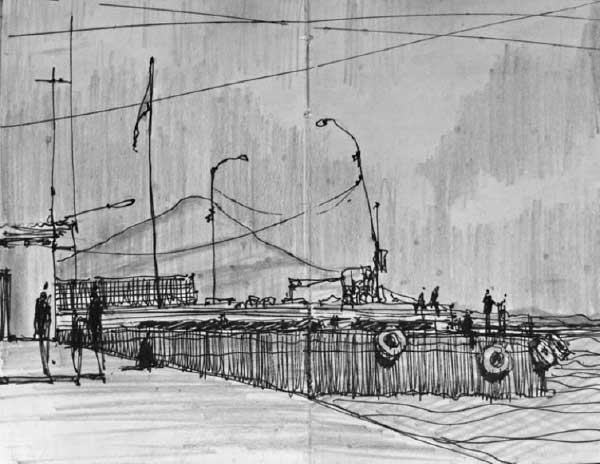 View from the docks at the volcanic island of Ometepe, Nicaragua by Simon Bussiere

View of kids diving into Lago de Colchiboca from the docks at the volcanic island of Ometepe, Nicaragua. 4. by Rose Brokenshire 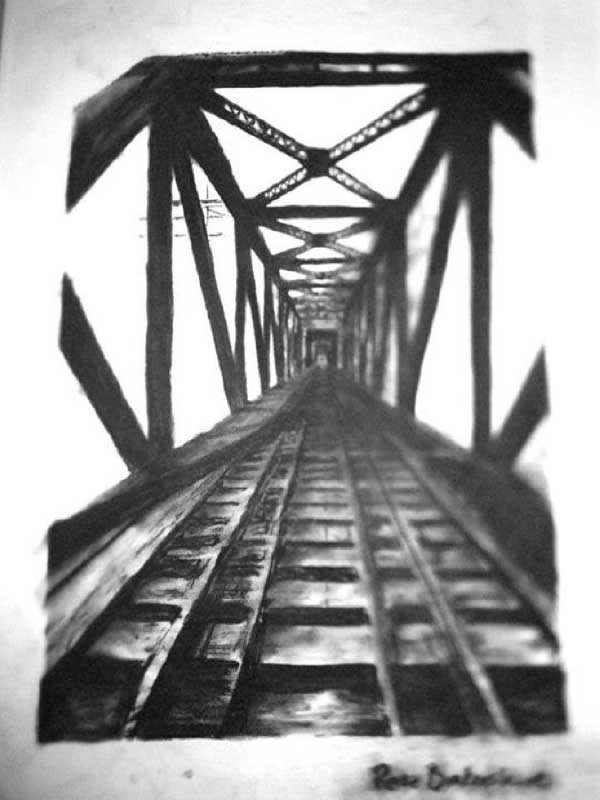 Charcoal drawing of an old train track by Rose Brokenshire

Rose Brokenshire is a recent graduate of the Bachelor of Landscape Architecture, Guelph University. She is from Toronto, Ontario, Canada. This charcoal drawing is of an old train track, which was a visual component for her final thesis design to describe the under-use and neglect of the site. 3. Mahafuj Ali

Imagination of a small jungle circuit by Mahafuj Ali

This sketch is an imagination of a small jungle circuit surrounding a guest house in the foothills of the Himalayas. I have never spent a night in such a place, but I dream of spending a night in solitude, with fireflies, and a full moon. I wanted to frame that dream. 2. by Yoan Zemyarski 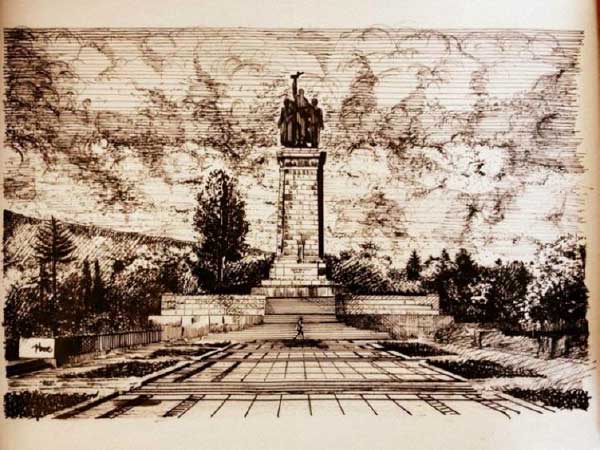 This Soviet Army Monument in Sofia is located in the central part of the city on an area of 2,000 square meters. By the end of 1989, the Soviet Army Monument is one of the most emblematic places of the city, where all kinds of celebrations occur. In recent years the monument has become a favorite place for skateboarders. On 17 June 2011 the monument became world news after one of the reliefs dedicated to World War II was painted with graffiti. Soviet soldiers were “dressed” like Superman, Captain America, the clown Ronald – a symbol of McDonald’s and Santa Claus. Underneath is written: “In keeping with the times.” From the book Forget Your Past. Monumental Monuments of Communism by Nikola Mihov. 1. by Mael Matthews 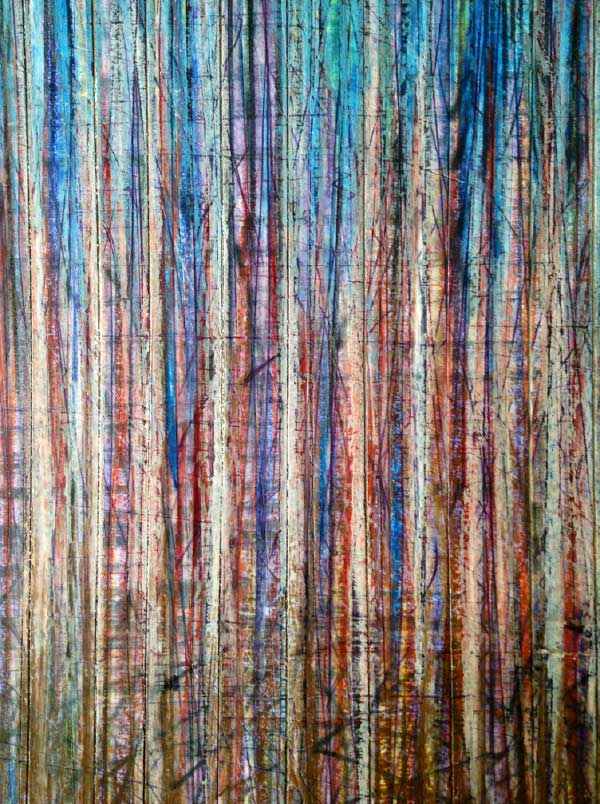 Sketch of the Yorkshire woodland by Mael Matthews

This is a sketch of the Yorkshire woodland drawn using biro, marker pen, and collage techniques. The lines are made to “bleed” by spraying them with hairspray. I am a landscape architect and artist working in Yorkshire, UK. So there we have it! Another successful edition of our Top Ten Sketches. We are always looking forward to brilliant submissions from our readers and are joyful that the art of drawing and sketching has not disappeared in our day and age. Article written by Oana Anghelache Enjoy what you’ve read! Support us and pick up one of our awesome T-shirts and hoodies today, Click the link