After a two week break we return to the consistently awesome Sketchy Saturday feature on LAN. The break allowed the entries to really pile up making this week’s top 10 even harder than usual to get featured in;  in fact there was so many that we wanted to feature  that we’ve decide to carry over some of this week’s entries into the next edition of Sketchy Saturday. In this week’s Sketchy Saturday we see many styles at a very high professional standard of artistic representation. We hope you enjoy it. 10. Paul Dean Coker, Consulting Landscape Architect/Architect 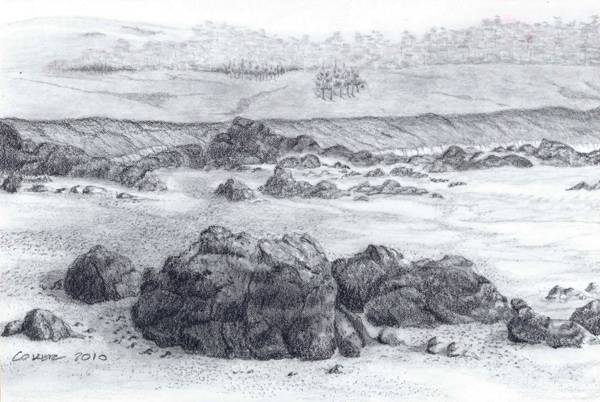 “This is the beach at San Simeon, CA, home of the renowned “Hearst Castle.” It is a State park, donated to the State by the heirs of William Randolph Hearst (and a great destination for landscape architects and architects-bring a sketch pad). The sketch is pencil on specially selected tracing paper that was then mounted over a textured art paper. Various pencil lead weights and a smudging stick were used”.
9. Djordje Pralica 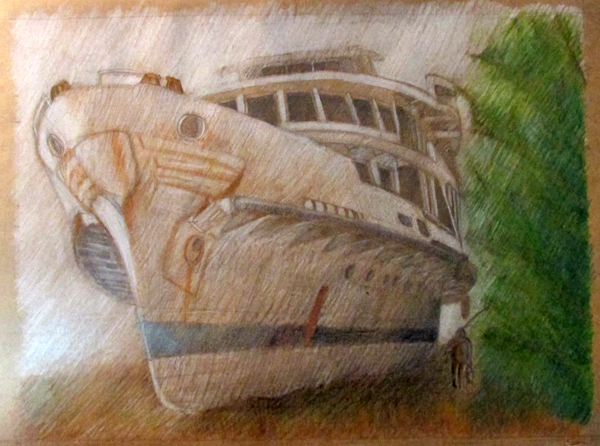 “I am sending you a sketch of a shipwreck located on a neglected part of Danube riverfront in New Belgrade. This colossus stands there trapped between shallow water and trees for some time and surely got my attention. Therefore I tried to share this gloomy but interesting atmosphere. I added a fishermen to highlight the scale. Sketch was created with colored pencils and brown paper”. 8. Francesco Speranza, graduate Building Engineer-Architect, Italy 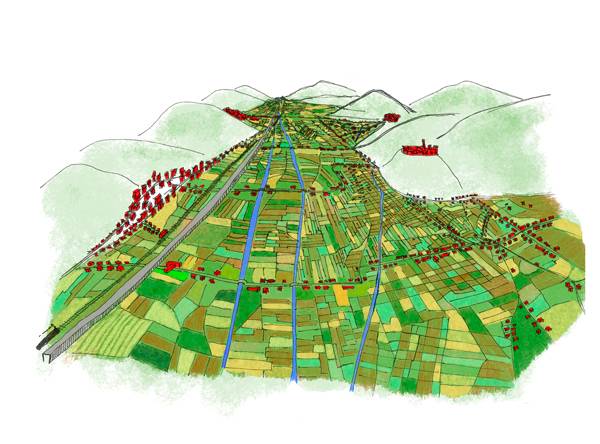 “The sketch was born from the necessity to synthesize in one drawing the project of an agricultural park in the Diano’s Valley in Italy, it is composed by a mosaic of fields crossed by filament of rural productive houses and paths that link the cities at the feet of the mountains. The drawing is a pen sketch colored with photoshop”.  7. Christiane Lisboa, Architect and Professor, São Paulo, Brazil 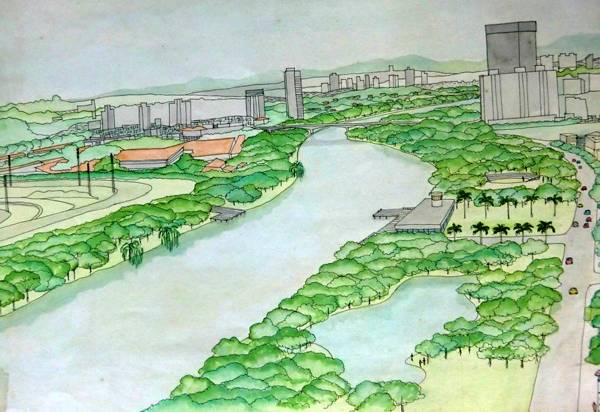 “I made this watercolor and pencil sketch in 1982 when I was about to graduate at the Faculdade de Arquitetura e Urbanismo da Universidade de São Paulo. I was sketching at the top of a building looking to Eusebio Matoso Bridge. It was part of my graduation landscape design project  “The River for the city”  concerning the spaces along the banks of the Pinheiros River in São Paulo, Brazil. Unfortunately up to this day the river is polluted and along the shores there are railways, freeways and residual paces which are almost inaccessible to people, although some improvements occurred along the years: there is a bike lane now and some efforts to plant trees have been made”. 6. Noel Saratan, Architect, Philippines 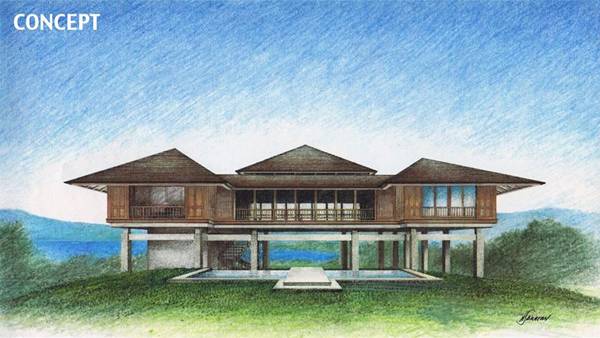 “When the client first showed to me where she wants her resort house to sit, instantly, I visualized a house on stilts, for the reason that I don’t want to block the view of a beautiful sea cove upon approaching the house, and for the owner to enjoy, on an elevated vantage, the views surrounding her.I adapted a floor plan with a rigid symmetry that suits well with the site”.
5. Alejandro Morales Ardila, Villavicencio (Colombia), Architect 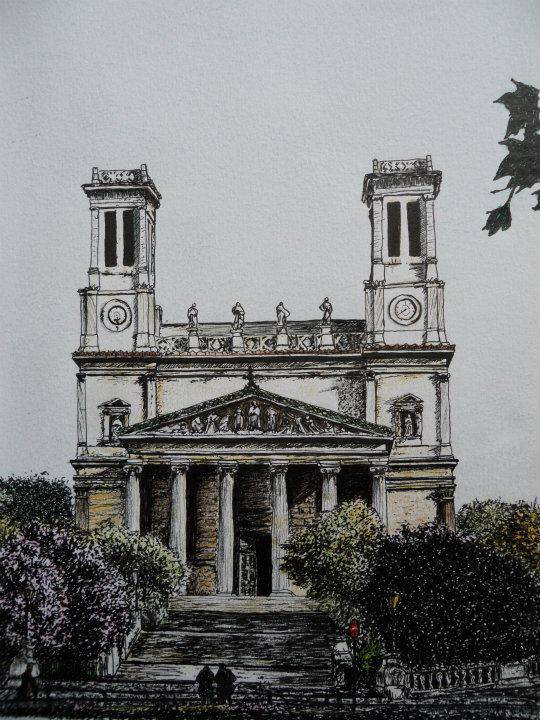 “I’d had the opportunity to study and have a beautiful connection with artistic things. First through graphic design, due to a meeting with a great plastic artist, who taught me different techniques. Now I am an architect, lover of urban scenes and perspectives. This is the san vicente de paul church in Paris. Made by pens and soft colors with trementina (pine oil)”. 4. Violeta Boyadzhieva, landscape architect,  Sofia, Bulgaria “This sketch is made like a gift for a friendly family in Connecticut, USA, where I am visiting currently. I am inspired by the combination of wild nature and precise Landscape Architecture. I made a lot of sketches of houses and their yards, because I think that this is the way to live, surrounded by rabbits and sometimes bears, blooming shrubs, giant trees and lakes. The exact location is Monroe, CT. I painted this one with watercolor, the paper I used is cold press, 140 lb”. 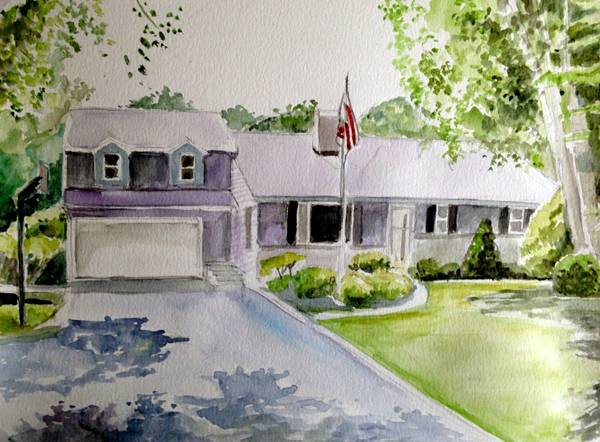 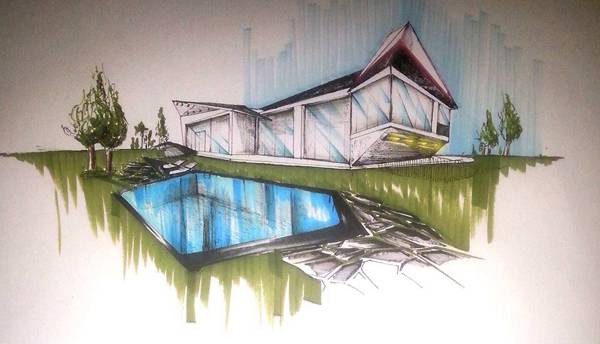 “Outlines of the design are taken from the modulating triangle with sharp lines giving it a modern design. The master bedroom gives rise to views of the outside. These lines are also given to the swimming pool. The sketch uses ink / marker to illustrate the idea of the design and the solutions for spaces. This project was made for Philadelphia University to provide solutions and new designs in the world of rural houses”. 2. Jesus Mario Lucero Toloza, Architect, Tijuana/México 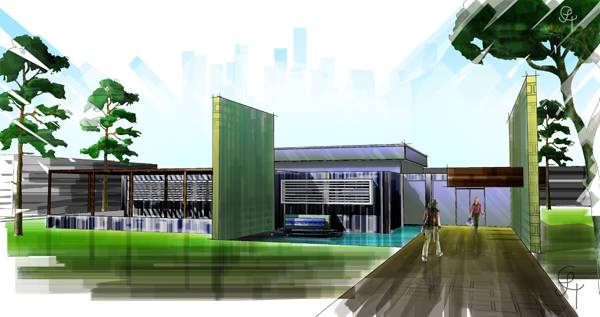 “This is a library for a school project in Tijuana Mexico. Sketch was made to appreciate the project in another aspect and not just in a realistic way. The sketch was made in a computer program called Piranesi, with white board marker brushes. Even that is in a computer program the image was realized all by hand using the mouse as a marker”. 1. Amaury Martins Neto, Landscape Architect, São Paulo, Brazil 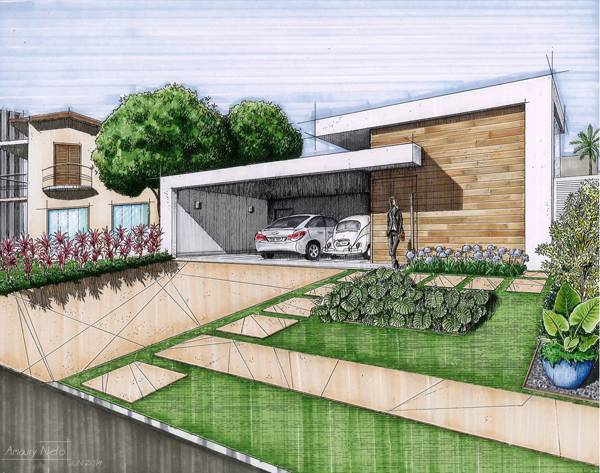 “I made this drawing to illustrate how the facade will look like after the garden has been established. I always try to make the garden design to strongly communicate with the architectural proposal, for a bigger harmony at the end and a higher satisfaction for the clients. This sketch is a 2 point perspective drawing with pens and rendered with markers”. – That’s this week’s Sketchy Saturday  top 10, congratulations to all of you who featured, it really is a challenging task, with so much awesome talent out there. Check out the Sketchy Saturday official Facebook album and see literally 1,000′s of incredible sketches! Follow all the winning entries on our dedicated Sketchy Saturday Pinterest page. If you want to take part send your entries into us at office@landarchs.com Recommended reading: Sketching from the Imagination: An Insight into Creative Drawing by 3DTotal Article written by Scott D. Renwick HOME PAGE Published in Blog