Central garden block B4, by TN Plus, in Boulogne Billancourt, suburbs of Paris, France. Located at Boulogne Billancourt, (suburbs of Paris, France, near the La Seine River) the Boulogne project, designed by TN Plus architects and also called “Central Garden Block B4”, is a landscape project whose leading idea is “to create an undulating green plinth stretching from facade to facade through the garden,” in the words of project manager Andras Jambor. The project integrates public spaces by using a central concrete plateau and proposing a sinuous topography aside the buildings to promote privacy. Because of its form and geometry, the concrete plateau becomes a green plinth that undulates from facade to facade through the open space. The green areas were proposed by considering the preservation of the sunny zones, which are affected by the shade the surrounding buildings create. This aspect defined the flora palette, the color palette, and the geometry of the plateau. 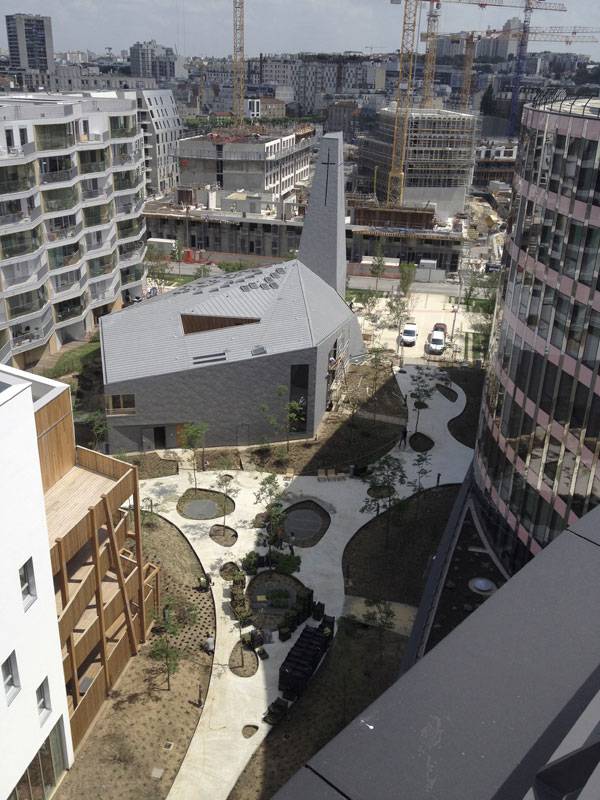 As we can observe, the combination of colors and textures of the existing buildings represented a contextual problem that affected the public plaza. In order to establish equilibrium, TN Plus landscape architects proposed sober materials and colors, which, in fact, create an attractive contrast with the existing surroundings. For example, the white color of the concrete plateau contrasted against the brown of the mulch increases the perception that the pavement and mulch platform are floating. Finally, the furniture used at the B4 project respects the presence of the proposed green areas. Along the same design line, benches, fences, and lights interact with space and visitors. 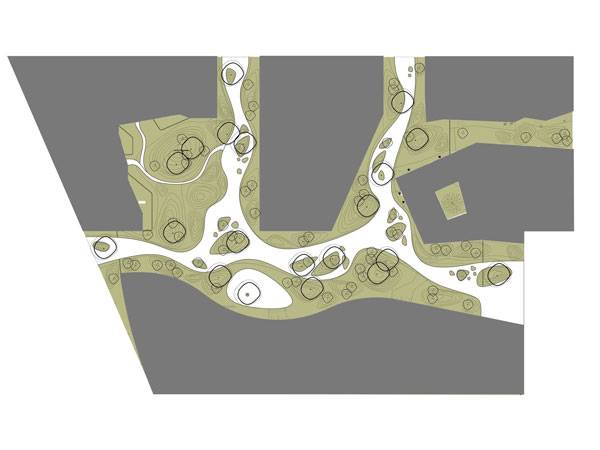 Central garden block B4, masterplan. Image courtesy of TN Plus

A Space That Blooms Every Year Most of the opinions about “Central Garden Block B4” would say that the planting palette is very basic and boring, but there is a very good reason why the palette has been planned this way. Daylight is the most important aspect to preserve in a reduced public transitional space such as the B4, not only for the vegetation but also for indoor activities within each building. Because of this, the flora palette is based on trees with medium development and light foliage, such as Gymnocladus dioicus, a carpet of low perennials, and lush wetland vegetation.

Other Articles Featuring TN PLUS:

Even with the reduced variation of vegetation species of the flora palette, the distribution of them along the entire concrete plateau creates a colorful pathway with random areas full of flowers. Most of the blooming plants grow in a natural way, creating big purple and pink areas. It is a simple solution, which gives the space a lot of color with low maintenance. 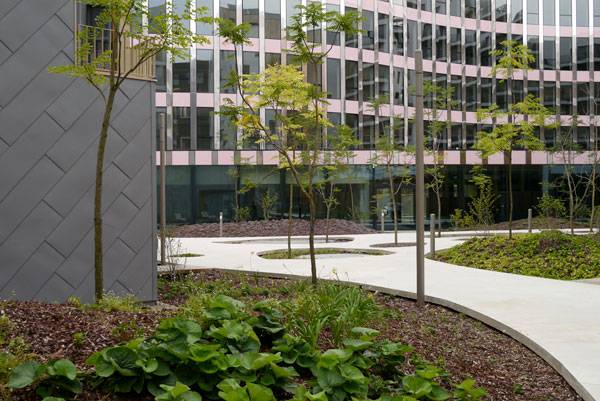 As Time Goes By, the Space Grows Up Thanks to research into the project, we have specific information on how it has changed over the years. The first impression of the green areas for the B4 is that there is a low quantity of plants and that the size of each plant is very small. Instead of seeing big green areas surrounding the concrete plateau, we see these green areas as part mulch and part vegetation. Establishing a More Dynamic Geometry Over Time As we can see in recent pictures, the initial landscape strategy has encouraged the natural growth and distribution of each proposed species of vegetation. The final aspect of the green areas is more natural and dramatic, where natural associations between plants take control over the garden. At the end, the white boundary of the concrete plateau will be lost, thanks to the natural growth of bushes and grasses, establishing a more dynamic geometry for the concrete plateau. 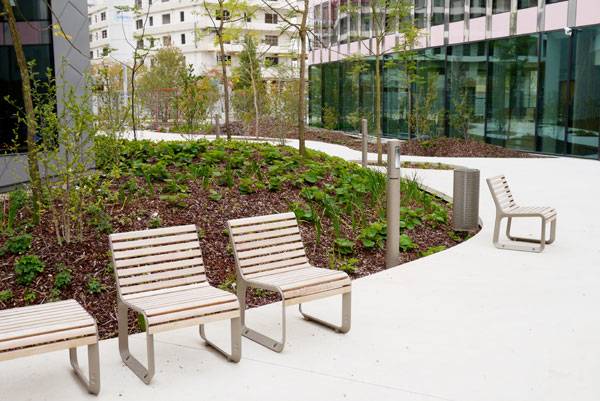 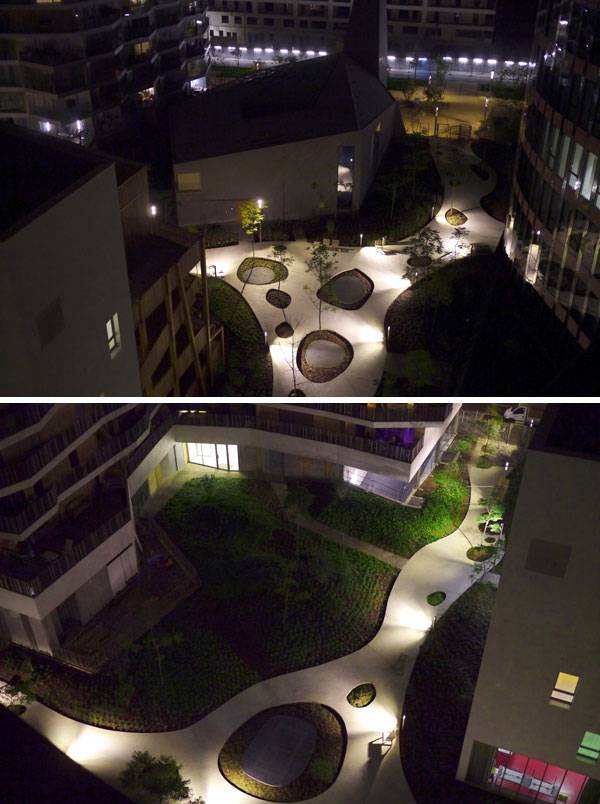 This final landscape strategy closes the gap if we are concerned about maintenance and the cost of the project. By thinking about the natural growth of the plants, TN Plus architects has transformed the preconception about how expensive landscape design could be. This final characteristic goes hand in hand with all of the revised design concepts, which have as a design axis transforming the outdoor area into a blooming garden. 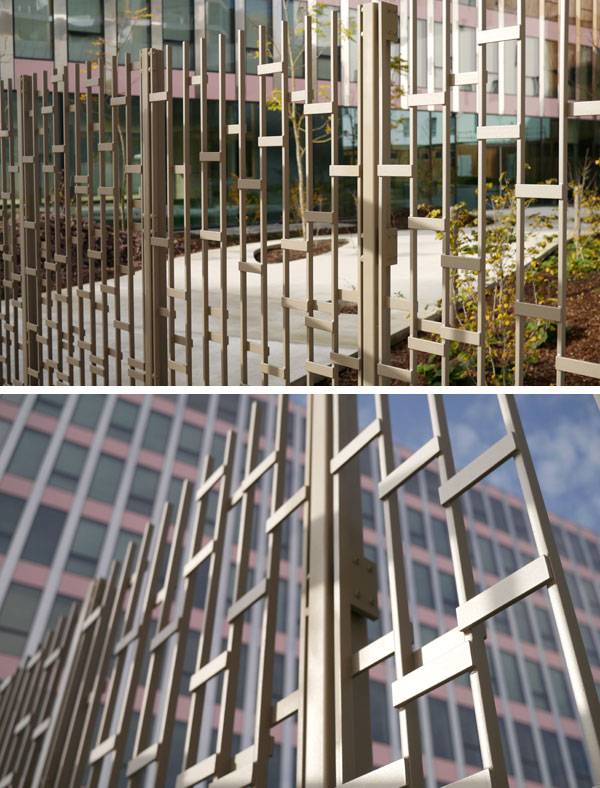 Do you think TN Plus made a good choice by being more concerned about the future aspect of the “Central garden block B4” project? What other strategies would you propose in order to obtain an adequate landscape design for projects such as the one at Boulogne Billancourt? 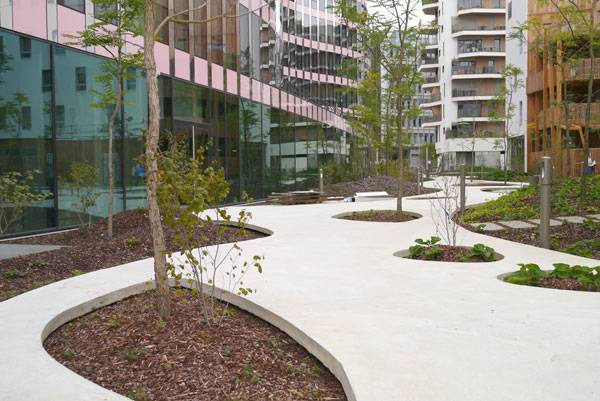