Laurance S. Rockefeller Preserve, Hershberger Design, Grand Teton National Park. Many know Wyoming for being the home where the buffalo roam, and while this is true, it is also home to one of the most breathtaking National Parks that America has to offer. Grand Teton National Park boasts the magnificent Teton Mountain Range, the mighty Snake River, and more than 200 miles of winding trails. It is now also home to the Laurance S. Rockefeller Preserve. The people of Wyoming are steadfast in their love for the land on which they live, play, and work, and seek above all else to protect and preserve the beauty that surrounds them. So it comes as no surprise that the LSR Preserve was designed to reduce congestion in the area and to provide visitors with a place to enjoy the solitude of the park and reflect on their surroundings. 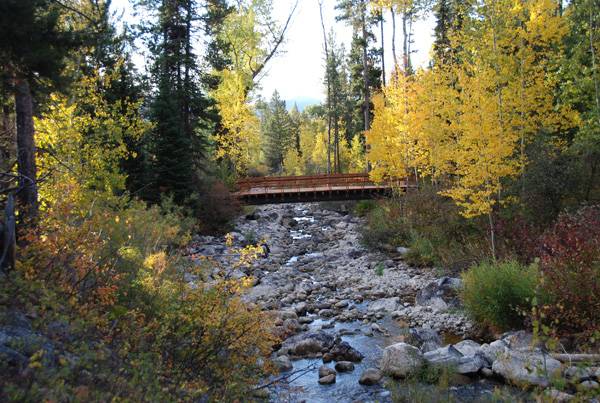 But is congestion really a problem in the park? Actually, yes. The entire state of Wyoming is home to just under 600,000 people, yet Grand Teton National Park hosted just under 2.7 million visitors in 2013. So the need to create a place within the park that could offer the solitude that most of the rest of Wyoming offers was great. 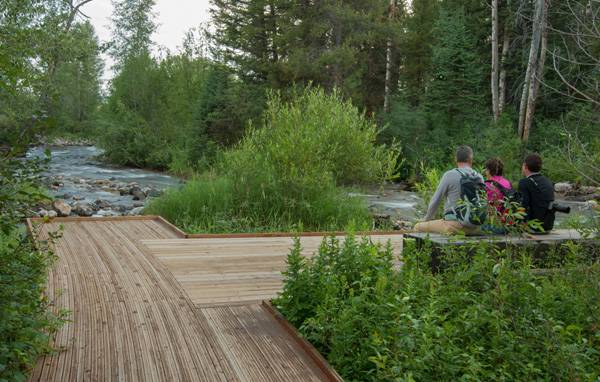 The site sits on the former land of JY Ranch, the family compound of Laurance S. Rockefeller. The 1,106-acre plot, located southwest of Grand Teton, was donated by the family in 2001 with the hope that visitors could learn about the importance of protecting areas of natural beauty. The park didn’t have to look far for a team that was able to give them the perfect design for the area, either. 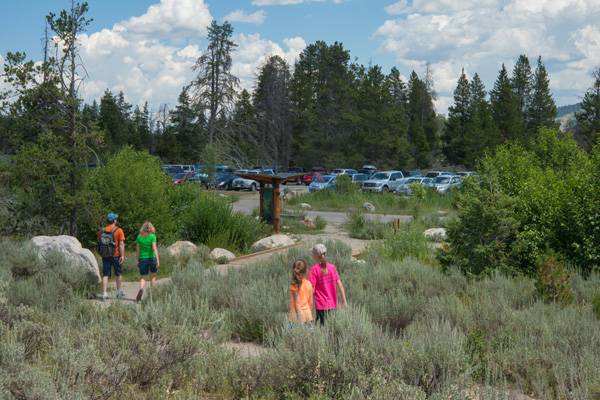 Hershberger Design, led by Mark Hershberger and located in neighboring Jackson, Wyoming, was up to the task. The firm’s mission statement even says that the designers are “driven by the desire to create enduring landscapes which balance human needs, beauty, and the natural environment,” and that is exactly what they did in the preserve, which opened in 2008. 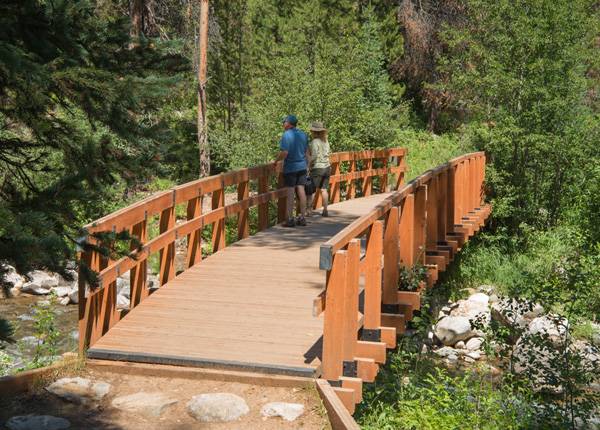 Trails of Interaction The scope of work for the project included designing a circulation system that would include trails for bicycles, pedestrians, and horses. According to their website, the trail system includes more than 10 miles of interpretive hiking and ADA-accessible trails and special interpretive and viewing spaces. They also included reclamation planning to restore unnecessary trails and vehicular routes to their native condition. 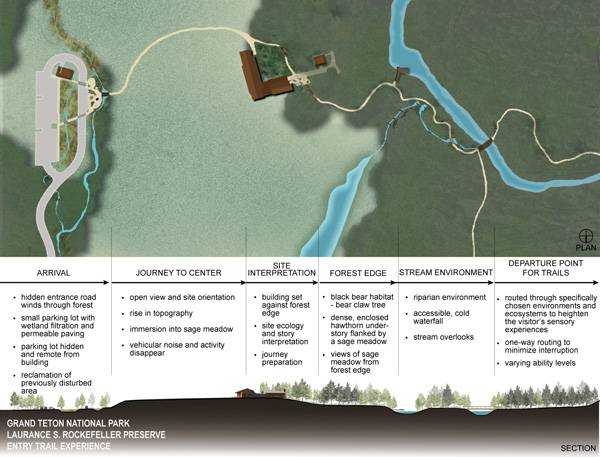 Visitors are encouraged to explore the vast network of trails that wind through mature pine forests and whispering aspen groves with magnificent views of the Tetons and Phelps Lake. The trails offer numerous opportunities to watch the wildlife of the park, which include the American bison (buffalo), wolves, elk, and the always popular moose. A Design That Blends into the Environment The design elements along the trails were made to blend into their surroundings, not compete with them; some metal, mesh footbridges were even designed to be overtaken by the growth underneath. Benches are constructed of large timbers resting on boulders, and paths lead not only over land, but also over water, giving visitors every opportunity to fully submerse themselves in the environment. 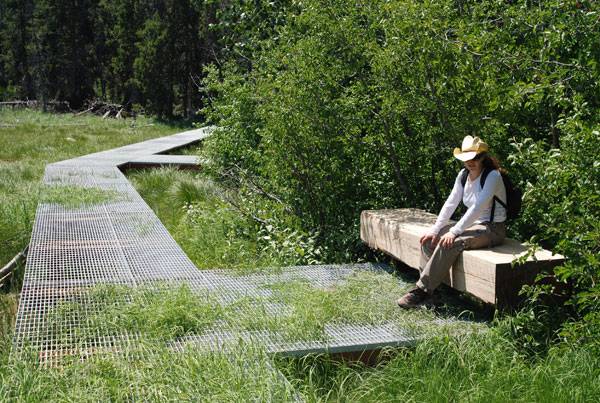 But before embarking on the trails, visitors are encouraged to stop by the 7,500-square-foot LEED Platinum (the U.S. Green Building Council’s highest level of certification) visitor’s center, designed by Carney Architects and M-E Engineers, for a brief orientation on the park and on Rockefeller’s vision for the preserve and his legacy of preservation and conservation. 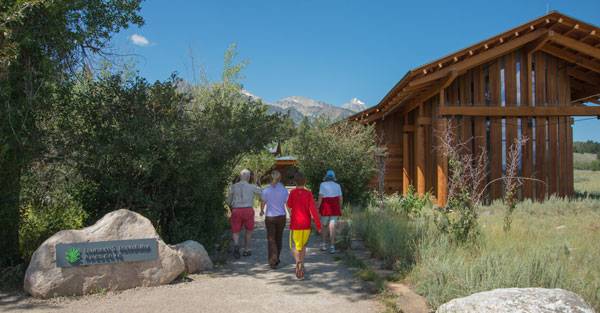 In keeping with the feeling brought on by the trail system, the building is located between two ecosystems — a meadow and a forest, “a very purposeful division,” says Hershberger, who specified that before construction, seeds from around the site were to be collected and replanted to landscape the building. This small detail allowed for the building to at once become a natural part of the site. 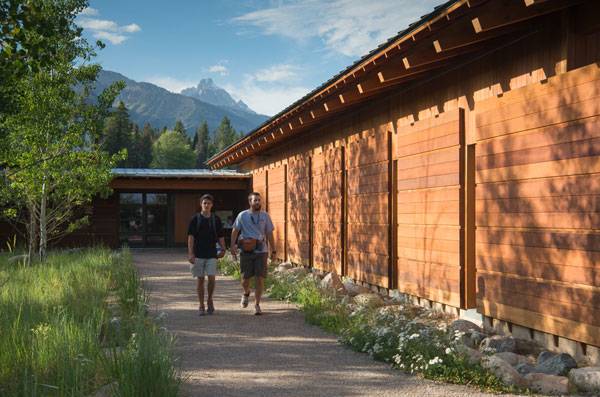 Once inside, visitors will learn about these plants and also about the wildlife they will experience on their journey outdoors, as well as, according to the park’s website, “the innovative design techniques and features that make the center a model for energy and environmental design.” 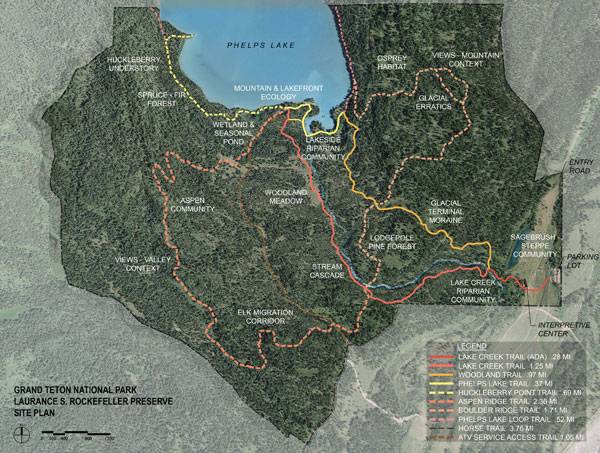 As the first LEED Platinum building within the National Park system and in the state of Wyoming, the visitor’s center and the entire preserve is proving to be the lasting legacy Rockefeller intended it to be. While he passed away before it was completed, he still managed to play an important role in the planning of the site, and his vision clearly shines through all aspects of the design. Recommended Reading: