Article by Moreira Filho KALA – Playground and Green Space in Berlin-Friedrichshain, by Rehwaldt LA, Dresden, Berlin, Germany. There is no time to have fun. Squares are supposed to be places where fun flows naturally. Almost all the projects of squares are directed to teenagers and adults. But what about children and elders? The KALA – Playground and Green Space in Berlin-Friedrichshain project was specially designed for them by Rehwaldt LA, Dresden, and of course, everybody can go there and have fun together. 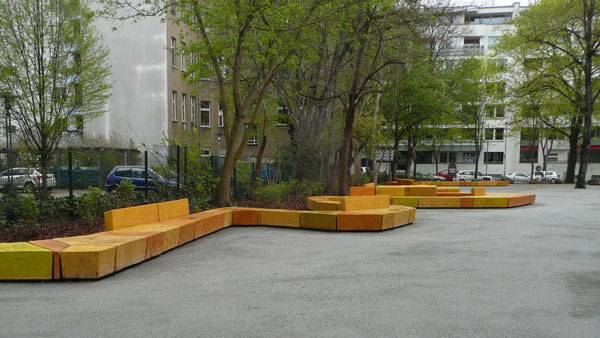 Putting the Site into Context KALA Square is situated in Berlin, among Hildegard Jadamowitz Street, Lasdehner Street and Kadiner Street, close to Frankfurter and Karl Marx Avenues, in the midst of the Friedrichshain district, composing two mini-parks. There is an elementary school called Ludwig Hoffmann nearby. That site used to be the residence of industrial employees before the Second War. It was partially destroyed in the war and some of the damaged buildings were demolished, giving way to wastelands, and some of them were transformed into small squares. After decades of reconstruction, a plan of revitalization was adopted in 2009. Nowadays, all of the inhabitants and visitors of the surroundings can enjoy this spot. 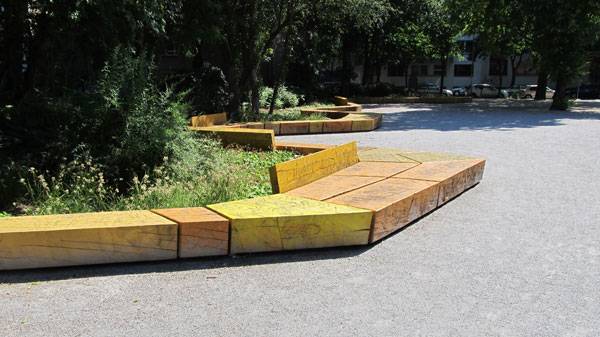 Rescuing Values That’s what this special square in Berlin, Germany, brings into play. It’s not only a beautiful place, but also a place of acquaintanceship. The intention is to make children active, developing their citizenship and self-consciousness, help them find friends, to learn with their own hurts and joys in funny playgrounds, and get tuned in with their environment and neighborhood. 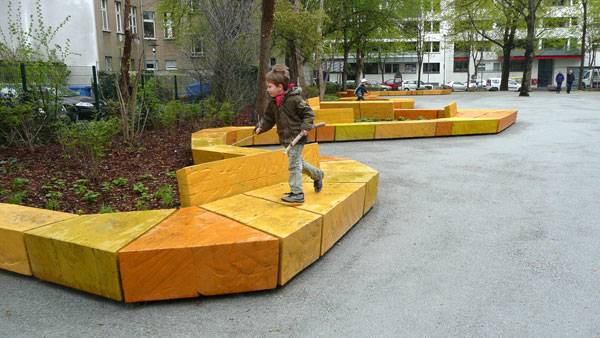 Simplicity is the Key to Reach Sophistication Simplicity doesn’t mean lack of design. With a special theme, a playground becomes a big world of fun. The square is cracked into two parts. Meeresinsel; that means Island in the Sea, and Erdeninsel; meaning Isle on the Earth. A group of children quickly enter into those “worlds”. Meeresinsel Meeresinsel has penguins and polar life motifs in the design, composing a big sandy zone as if it were a big sea or ocean, rounded by broken ice sheets. It allows children play in many different ways: climbing ice sheets (made of concrete), where they can slide, too, or another one where they balance, dive, hide etc.; everything their imagination can invent. 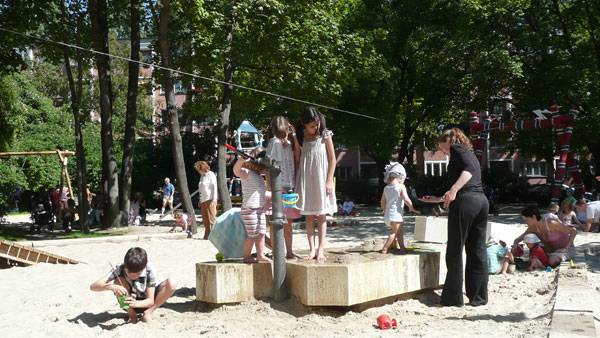 There is nothing as humorous as a child playing that he is a seal, is there? Or even following the penguins’ footsteps, or hiding and appearing from a hole in an ice sheet. A paved area in the south makes a small square where a water pump was installed, to the children’s joy. They get dirty with that messy mud of sand. Good for their growth, bad for their mother’s laundry. 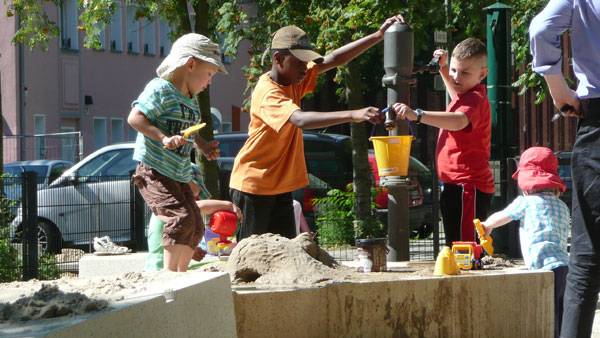 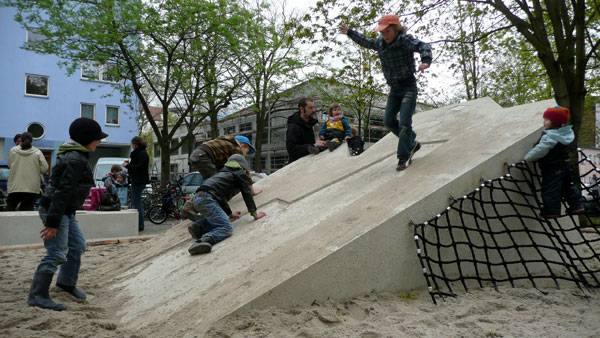 Erdeninsel On the other side, across Lasdehner Street, is the other part of KALA’ Square, called The Erdeninsel (Isle on the Earth). Although this area also works as a passageway, elders maybe prefer to spend time there. It’s cool and calm to take a sunbath, play cards or musical instruments, read the news or just stand, talking with friends for a while, without thinking about work or boring things. It’s right beside the elementary school and its green sensation gives a very pleasurable walk. Elders can have a sit on a bench which is not only a normal bench. Completely charming, the bench is highlighted! Its design is beautiful and exorbitant, and it has multiple functions; as a bench only, or a picnic table, resting area, stage for anything, or as a big “bridge” for the childrens’ frolicking. Made of wooden pieces of different sizes and painted in ocher shades, it stimulates the vision by its own profile of “curve lines” moving out from the junction of rectilinear blocks. 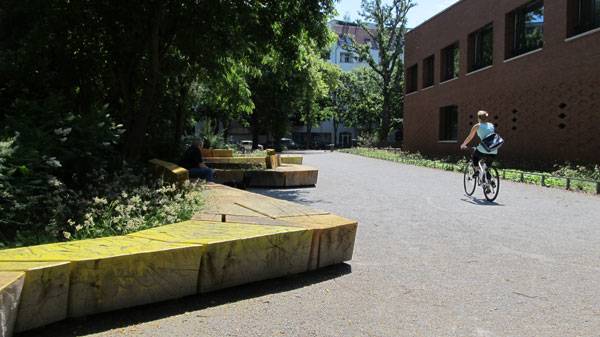 Materials like concrete, sand, wood and water were applied. Blocks, sheets, meshes and ground vegetation were arranged in strategic positions, giving space for children to play, to allow for public passage, and for the rest and picnicing of elders and familes. Each thing in its own space. Modest, easy and it works. Vegetation The existent vegetation was maintained in the project, with few modifications only; the addition of some new trees and shrubs. Its effects allow some shadows in the summer and gives a green background to the landscape in a charming way. That’s because some of the trees are from Platanaceae, Altingiaceae or Fabaceae families, meaning that their leaves are green in the spring and summer and are dropped in fall and winter. Because of this point, the landscape changes with the weather and the seasons. 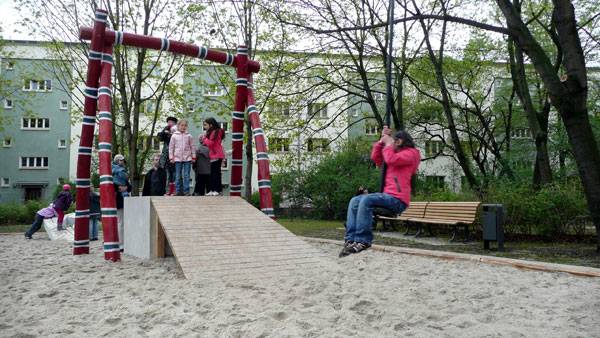 They are tall, straight, thin, elegant; similar to some that you probably draw in your sketches. Shrubs and groundplants give, in their profiles, a visual mix of leaves and shades; almost like they were in a forest. As the backgrounding to the square, the swishes of the wind in the green elements gives a calm sensation and barricades the noises of day-to-day. But don’t expect to find lots of different colored flowers. We are talking about a greenspace, not exactly a garden! Simplicity – All that we Need KALA is inside a neighborhood constructed and reconstructed, which served as employees’ homes before the Second War and which now is inhabited by average families. It doesn’t contrast with the big box buildings in the surroundings, but you know that there is an interesting thing in there, because of the showy green open area. Family conceptions have changed through the years. Even if you do not have one or don’t live with them, going to parks and squares is still a good way to enjoy family life. As we learn with children, simple toys and playgrounds can be amazing and take us to different imaginative worlds. Elders can tell us how to improve our quality of life after years of hard work. And all these stories can take place in such well-designed squares like KALA. So, go out with your folks and follow the penguins’ footprints at KALA playground and greenspace. Do you usually enjoy having fun with your family like they do at KALA? When was the last time? Tell us; how do you spend your time in public spaces? Go to comments 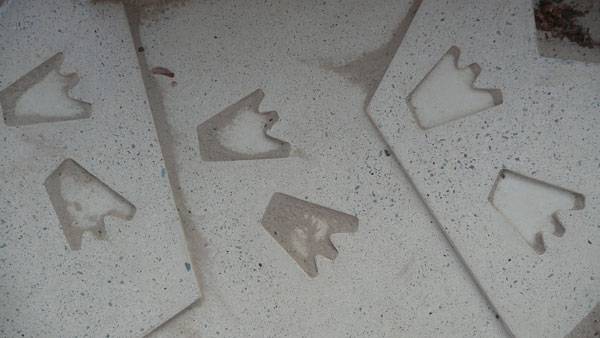 Full Project Credits For the KALA – Playground and green space in Berlin-Friedrichshain: